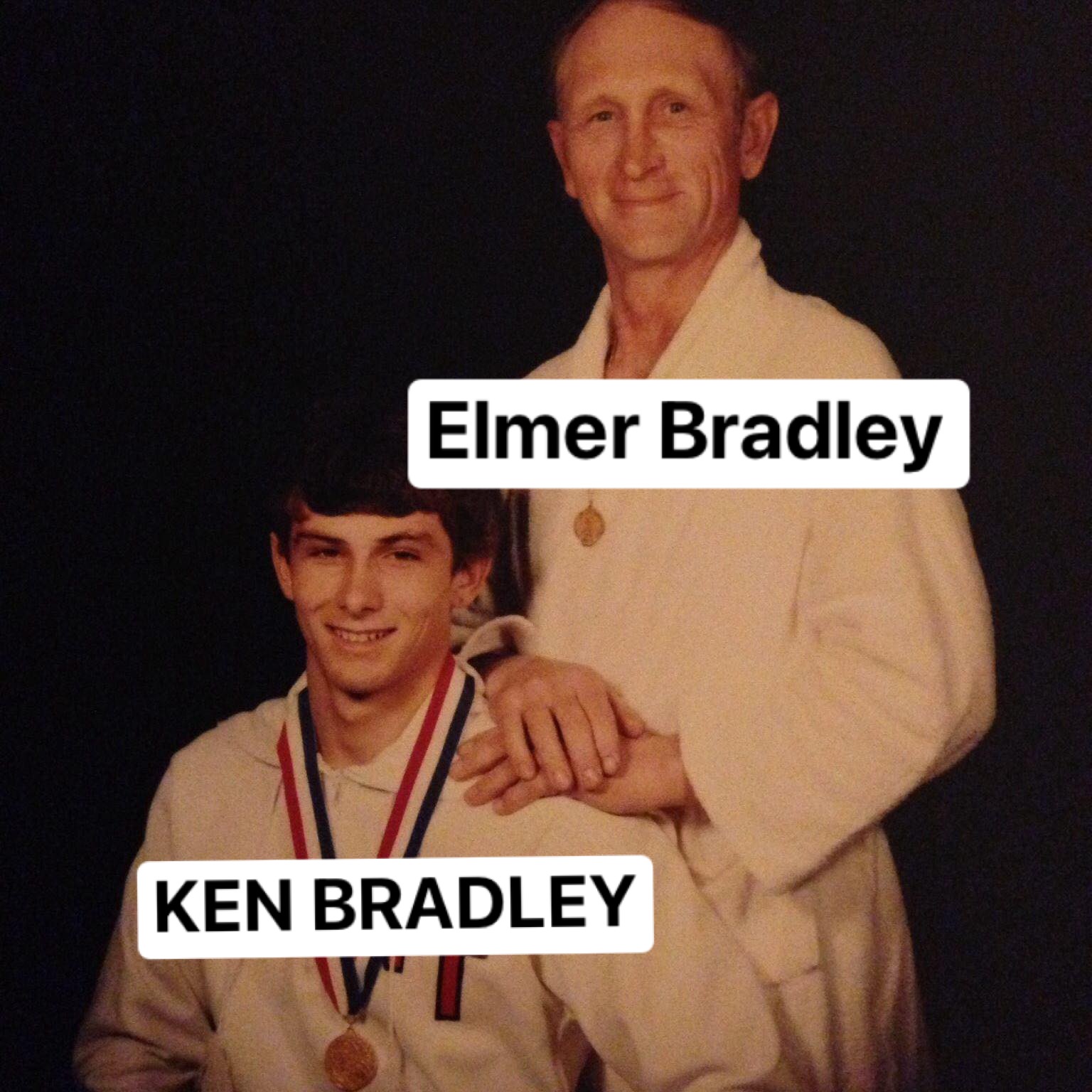 In 1951, Elmer Bradley of Traer HS, made history when he became Traer’s first ever state champion by winning the 155 lb. division… and he would be the last Traer wrestler to win state until Courtney Risk won 1A 132 in 1982. That ended up being a nice little stretch where Traer had 4 State Champions from 1982-1987. And not only did Elmer Bradley start seeing some guys from his alma-mater of Traer wrestling start to make a splash, but he also started seeing some of his family members reeling in the hardware around that time as well. Gavin Bradley, his nephew (I THINK) was a state runner-up for Jefferson-Scranton in 1995 and his brother Garrett became a state qualifier for Jefferson Scranton. 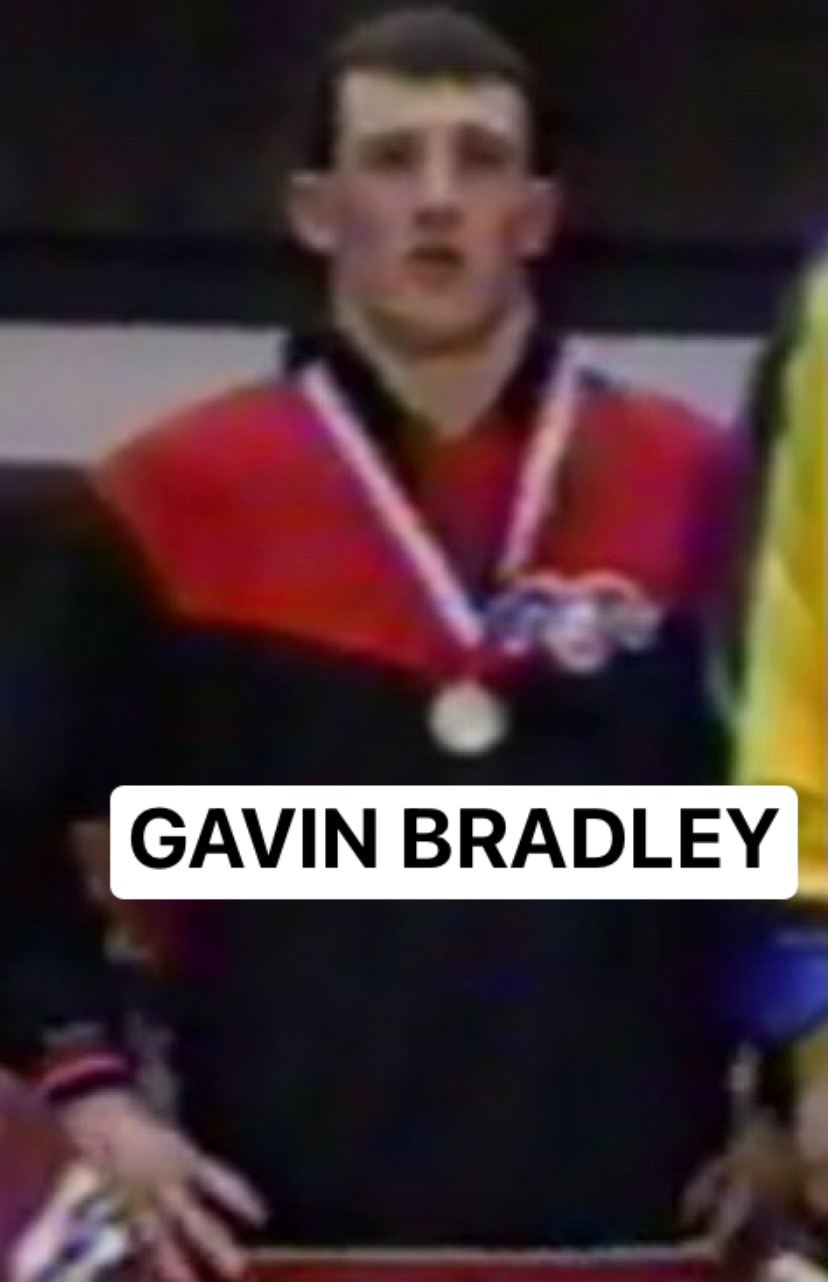 And then Elmer’s nephew, Paul Bradley entered the mix. Paul became a 3X state finalist in 1999-2001 and won state as a Senior in 2001. He eventually went on to become a successful collegiate wrestler for The Hawkeyes and had a successful MMA career to boot. And when those three, Gavin, Garrett and Paul did so well in their own careers, they were actually following the footsteps of yet another Bradley that came before them and after Elmer who also won state. His name was Ken Bradley and he was a state champion for Traer-North Tama in ‘84. 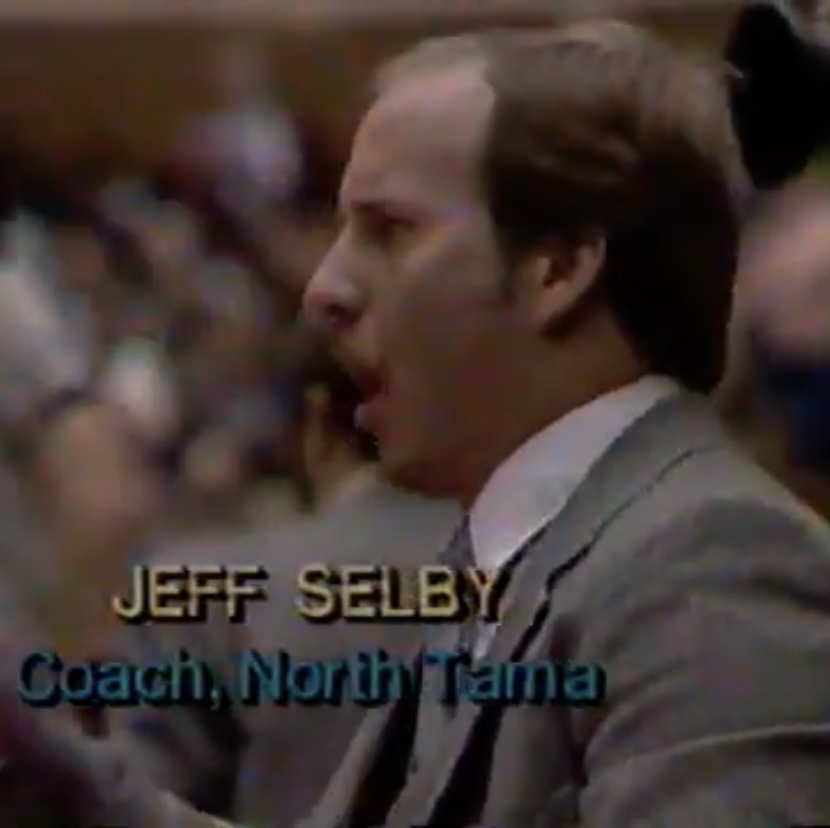 Ken Bradley was coached by Jeff Selby. Bradley made his first appearance at state as a Sophomore in 1982 at 1A 126, but was eliminated after being defeated first round.

The following year, Ken qualified for state again at 1A 132. Ken was undefeated coming in with a record of 32-0 and looked the part when he won his first match, but was stopped by Dave Tool from Gilmore City-Bradgate in the quarterfinals. In the consolation side, Ken fought back hard with some big wins over some good wrestlers and ultimately placed 4th at state in a very balanced bracket. 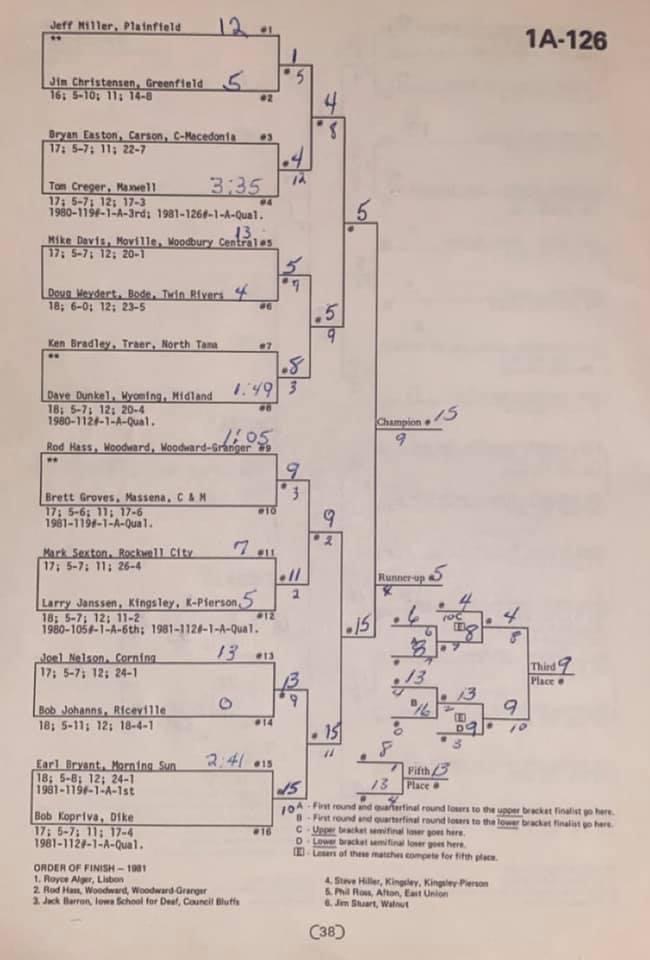 In 1984, Ken qualified again at 1A 132 and was undefeated coming in for the 2nd year in a row and came out swinging, for he pinned his first two guys to stampede into the semifinals. The guy he pinned in the quarterfinals was Bill McLaughlin from Avoca who was making his 3rd appearance at state that year. This set up a semifinal showdown between Ken and the guy who placed two spots above him at his weight the previous year, Rick Swalla from Stuart-Menlo. Bradley apparently came ready to rock and roll, for he defeated Swalla by the score of 7-2, advancing him to the finals where he was set to face Wes Andrew from Monroe who placed 3rd at 3A 126 the year before. And the match between them ended up being epic. 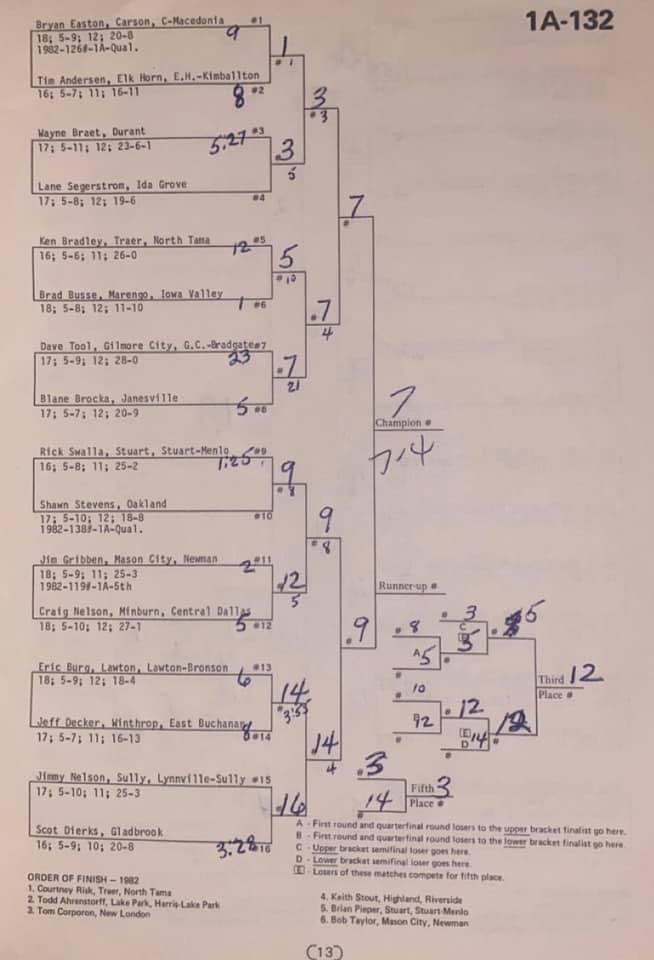 Wes Andrew of Monroe was the returning 3rd place finisher from 1A 126 and just like Ken Bradley, he was undefeated on the season. Also like Ken Bradley, he had some familial history with wrestling. A guy having a family history in wrestling wasn’t as common in 1984 because back in 1984, there just weren’t as many wrestlers who had fathers with wrestling history. The sport was younger. Anyways, Wes Andrew was the nephew of Coach Bill Andrew who coached some of the best teams and individuals ever in his days at Osage.

So as soon as the whistle blew to start the match, it looked like these guys were like butting heads due to both being so aggressive. Both of them just firing hay-makers at each other, and countering their haymaker with one of their own haymakers. One guy would get thrown to their back and would counter by throwing the other guy to his back and while he was still on his own back. Haha yeah it was wild. And Monroe had a wicked fireman’s carry… so he kept hitting Bradley with that to go ahead at the beginning of the match. But Bradley just kept firing away and just kept coming. He ended up winning a back and forth, close and fun state finals match to become the second Bradley to win a state championship. 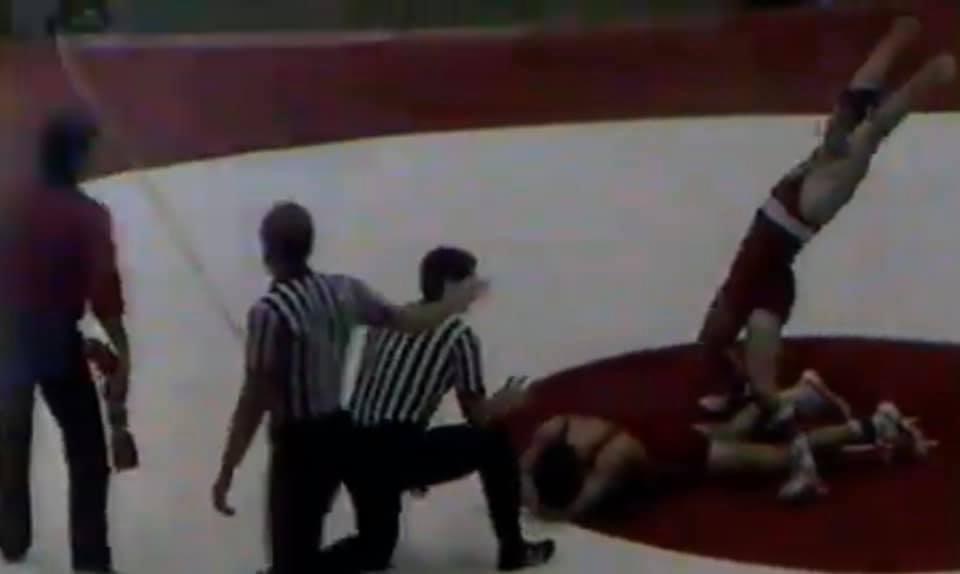 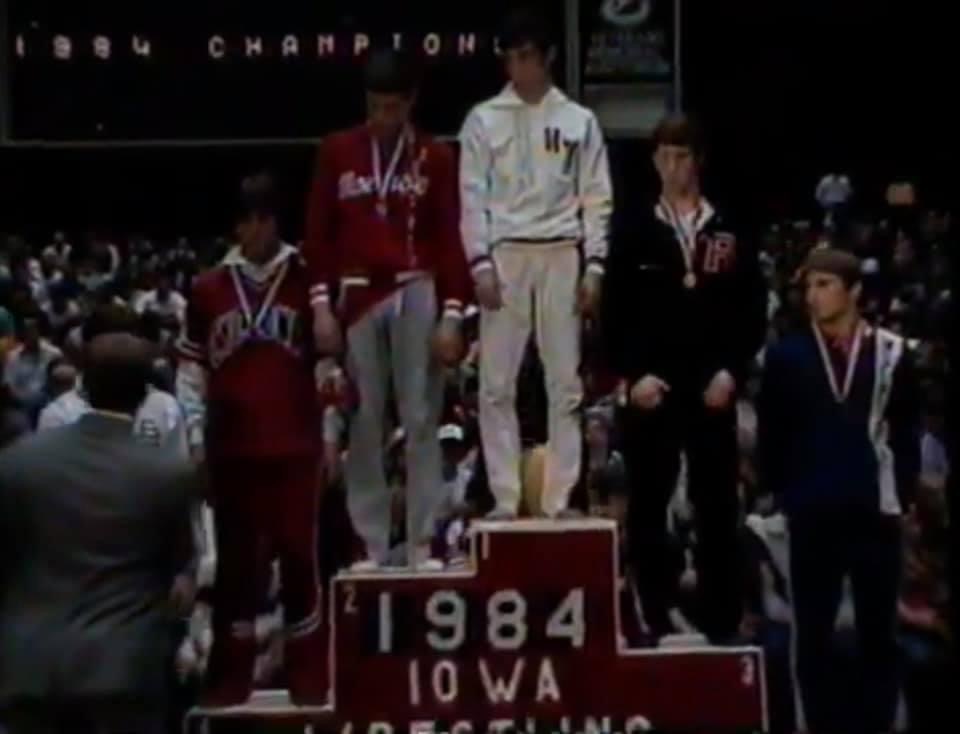 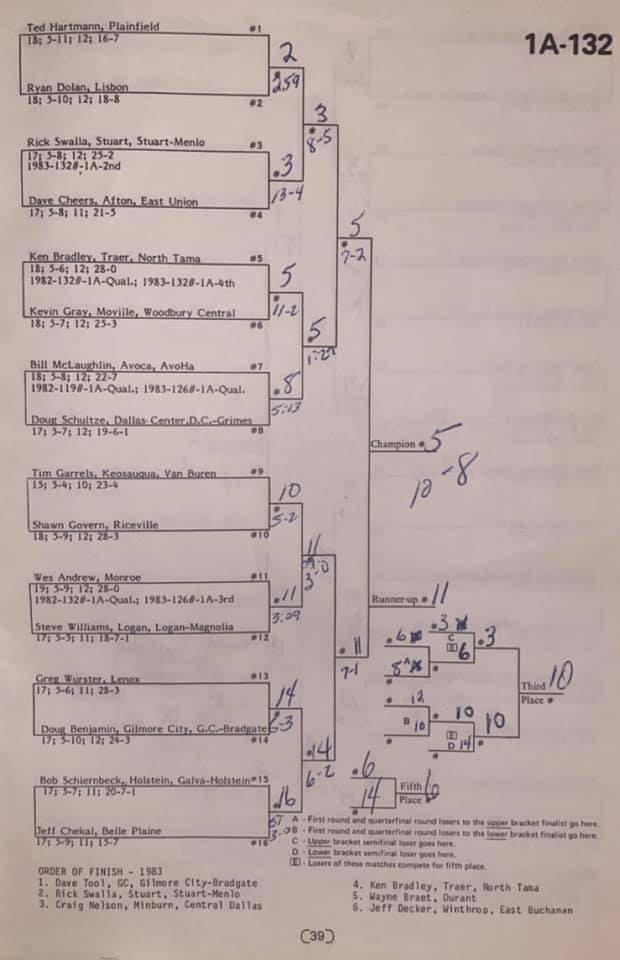