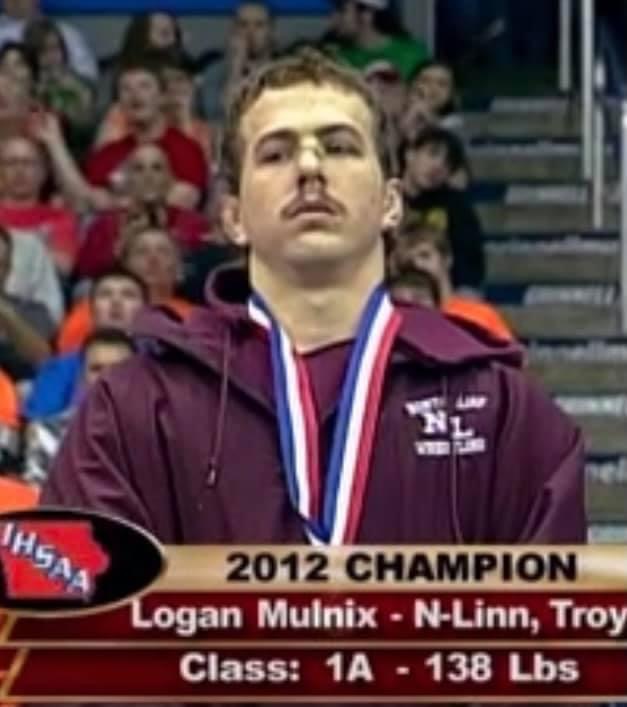 “Winning. No matter what I’m doing I want to be a winner at it. I don’t like to lose at anything.”

-Logan Mulnix in an interview from The Gazette in 2012

Logan Mulnix was an incredibly talented, fiery competitor who wrestled for North Linn and graduated in 2012. He was the younger brother of Ryan Mulnix, a 2007 graduate who placed 8th, 2nd and 3rd at state. Logan was accomplished pretty early in the youth wrestling circuit. He placed 2nd to Tyler Shulista one year at state and was a 2X AAU state champion, winning it as a 7th and 8th grader. In the finals as an 8th grader, he defeated a guy named Willie Miklus. This was one of the biggest matches to ever take place in the history of the AAU State tournament, for Willlie was a 5X AAU State Champion coming in and was going for his 6th title…which means you won it every year. It doesn’t happen very often. And Logan Mulnix prevented that from happening.

Mulnix qualified all 4 years he was in HS, placing 7th, 1st, 2nd and then first again. And every year, he had a match or two at the tournament that would amaze those in attendance. Heck, his first ever match as a Freshman at state was a huge win for a Freshman and he did it against my 1st cousin, Senior Jon Swafford from New London, who was coming off an 8th place finish from his Junior season. When a Freshman beats a returning place-winning Senior at state at a weight like 125 lbs, that’s making an early statement. Jon was good. Logan put the place on notice immediately at state that year. Logan lost a 1 point match to the eventual runner-up the next round and then did what he had to do to place 7th at state that tourney. He finished the season with a record of 41-3.

As a Sophomore in 2010, Logan came in with a record of 35-2 and dominated his way through a very balanced 1A 125 lb. bracket. His closest match was a 6-2 win over Jake Kadel in the finals. That bracket also included several other guys who either placed or made the finals at some point of their HS careers. He dedicated his state championship to his brother Ryan, which as the oldest of 4 right-knit brothers, I thought this was so cool of him.

As a Junior in 2011, Logan came in with a 37-1 record and had the tournament that probably stung the most considering he lost a close match in the finals to place 2nd, but still…There were some positives for him in the tournament. In the semis he beat a kid named Trevor Paulson Tri-Center, Neola who was on fire that year… Most importantly, losing in the finals was probably a great learning experience for him that he may have needed at the time.

As a Senior, Logan came into state with an undefeated record and was on top of his game. He officially left his mark as one of the baddest dudes to ever step foot on a Wells Fargo mat after this tournament. He won his 2nd state championship that year and after his first round match, the guys he defeated went back to place 4th, 3rd and of course, runner-up. The kid he beat in the finals was Payton Rice from Sioux Central, Manson. Payton is the son of Stacey Rice, a 3X state champion from the 80’s and to this day, one of the best to come out of our state. And Payton learned well from him. He was really good…a 4X placer, and he didn’t have an answer to anything he encountered vs. Logan in the finals. Logan was on fire that tournament. Great way to end his HS career. He finished with a career record of 163-7.

Logan Mulnix was a pretty entertaining wrestler to watch. If you compared the person he is off the mat to the person he was while on it…it’d seem like a total oxymoron. Like night and day. Every time I saw that kid around when he was not on the mat wrestling, he seemed to always be having fun, goofing off and being funny. However, when it was time to compete, he was locked in and programmed for systematic destruction. His approach was not to get his hand raised after time was up or a pin was called. No, time was something he didn’t want to waste in securing his wins. He wanted to either pin the guy quick or rack the score up and break the other guy mentally as soon as logically possible… His mission was to alleviate any fragment of hope the other guy may have as quickly as possible. And he had the skill set to do so, for guys used to just get frustrated out of their minds with him. His length, leverage and speed just had guys at a loss. Sometimes you’d see a guy attempting a shot and a millisecond after they lunged forward to attempt this, Logan, in a flash would be in on their legs and grabbing their ankles and basically putting them on their butts without even having to put his hips into it. The kid seemed like he had a crazy strong grip…once he got ahold of a guy’s heel on a shot, it was over.

And that’s only the beginning… We haven’t gotten to his ability to ride, yet. Logan had to have been one of the best riders in the entire 2012 graduating class. I mean, he was like a spider playing with his prey. He had an answer for everything and was proficient at every series you could utilize on top whether it be cradles, tilts, bars, legs, etc. He did them all well and what made him borderline impossible to get away from was his ability to go from one series to the next as if it were instinctive to him. This fluent style on top just seemed to leave his opponents broken, lost and without having any answers.

Here is a cool quote I read from Logan Mulnix that he made as a Senior in HS:

LOGAN MULNIX: “What I’m doing differently this year is trying to separate myself. I’m trying to win by large margins every single time. Go out and dominate and make sure no one thinks they can hang with me. I don’t want anyone thinking they’re in the match with me. I’m just going out trying to score more points and more points. I want the kid to be out of the match by the second period.” 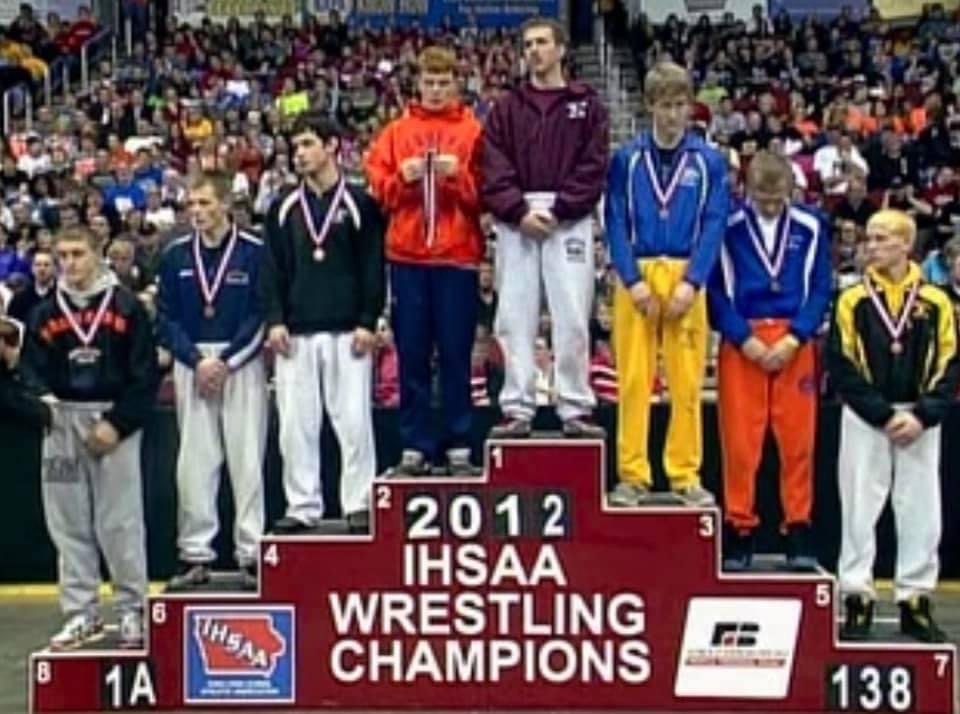 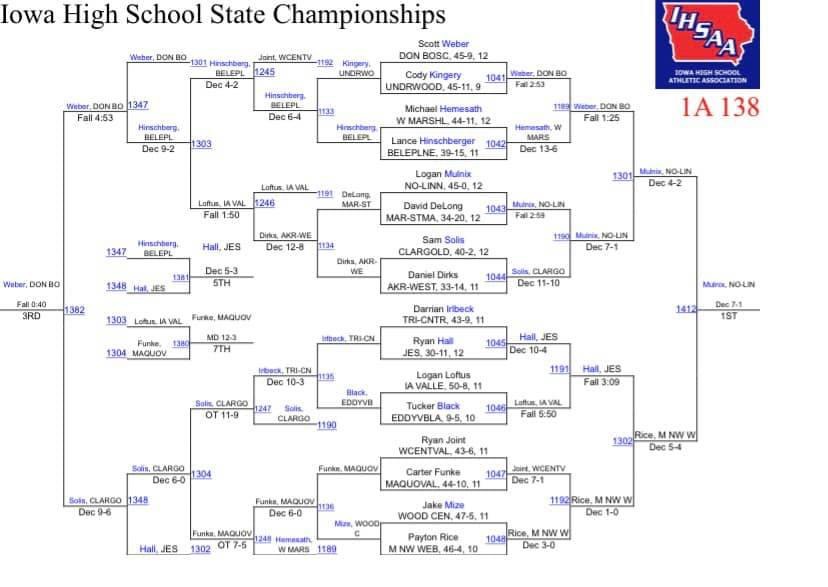 Doug Leclere got my brother involved and I followed!

My brother Ryan Mulnix… he got 8th, 3rd, and 2nd! And was a D-3 national qualifier, and his sons, Sawyer and Landon are also wrestlers. Look out!

I won aau 2x, placed at Tulsa multiple time as high as 3rd, had some amazing team Iowa results in elementary/middle school duals with class of 2012!

Losing in finals my junior year, was extremely tough on me mentally, but I came back to go undefeated and win state as a senior!

Mark perry is who I tried to wrestle like! I was good scrambling, good from space and tough on top!

How influential was the Cedar Valley Mat Club to you?

Life changing! The battles we had in that room daily were amazing! Without that club I never would’ve accomplished anything I did!

Would you say you were better on your feet or on top?

Top for sure I took pride in it!!

When you wrestled someone, you were a master at breaking your opponent. Is this a skill you developed in time? Could you tell when you “broke” an opponent?

I always thought there was nothing worse than getting ridden out or turned! So I became a master on top and when someone can’t get out it mentally breaks them pretty quick!

Was there ever a win you had that gave you the confidence to bring things up to another level?

Cole Welter my freshman year. I lost in triple overtime at sectionals, but beat him at districts! He already had all the credentials and that win gave me a lot of Confidence!

Not really I felt Like my style was unique.

Drake Ayala vs Cory Clark! Both sebolt guys and match up wise would be amazing!

Might be biased but Brandon Sorensen! 4xer, 4x AA at Iowa the best wrestler I’ve ever seen!

Freshman year quarter finals. Lost my dream of being a 4 timer!

Work ethic, I wasn’t a slacker, but I didn’t train the way I needed to either!

Winning state my senior year with my brother in my corner!!

Grant Henderson from Alburnett! We had some amazing battles and the atmosphere from our fan bases during those were unreal!

Golf and just being with my family!

Amazing I love this sport!

Wrestling forms every aspect of you! Hard work, dedication, respect, it’s the best sport in the world!

I work at Quaker Oats in Cedar Rapids.

Summer wrestling is where you make the biggest gains! Get into freestyle!

No I wrestle enough of these young guys in practice!