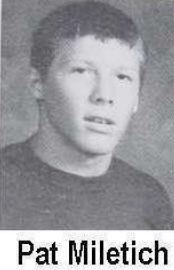 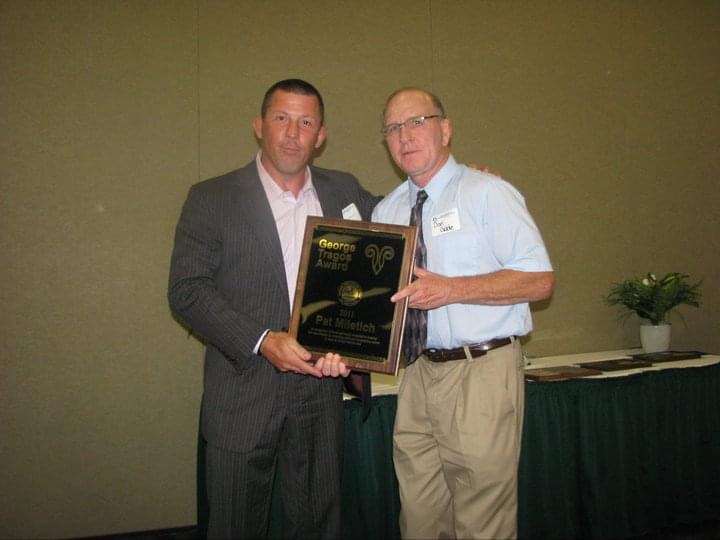 Pat Miletich is a well-known name across the globe, really for being one of the most influential pioneers of mixed martial arts ever. Pat has been a success as a competitor in MMA. He has been a success as an MMA trainer. He has even been a success as a commentator for MMA. Through the martial arts academy that he founded, “Miletich Fighting Systems,” Pat Miletich became arguably the most successful MMA trainer of all time given the accolades that his fighters went on to accomplish. Through Miletich Fighting Systems, Miletich has helped provide lucrative MMA career paths for countless individuals and has likely saved the lives of several people who were instilled with a sense of direction, positivity and work ethic by him, which are qualities some of them may have never found had they not met him. And whenever there is an individual like Pat in the world who has made such a positive impact on so many lives, there is usually always a source that provided the same kind of impact on them… And in Pat’s case, one of the primary sources was Bettendorf Bulldog wrestling, led by legendary Head Coach, Franc Freeman that planted the seed in Pat Miletich. 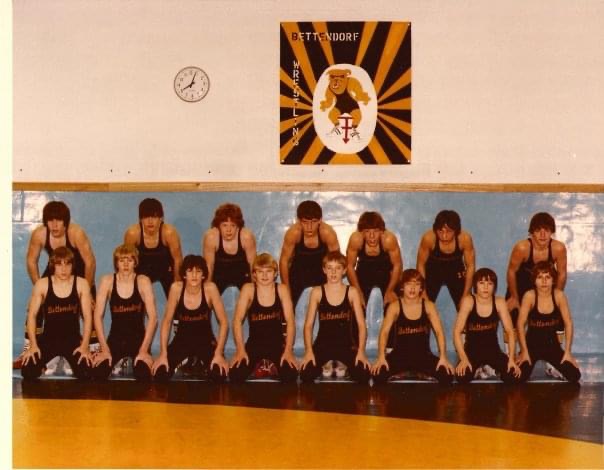 1980 Bettendorf JH Wrestling. Pat Miletich is 3rd from right in the back row, I believe. 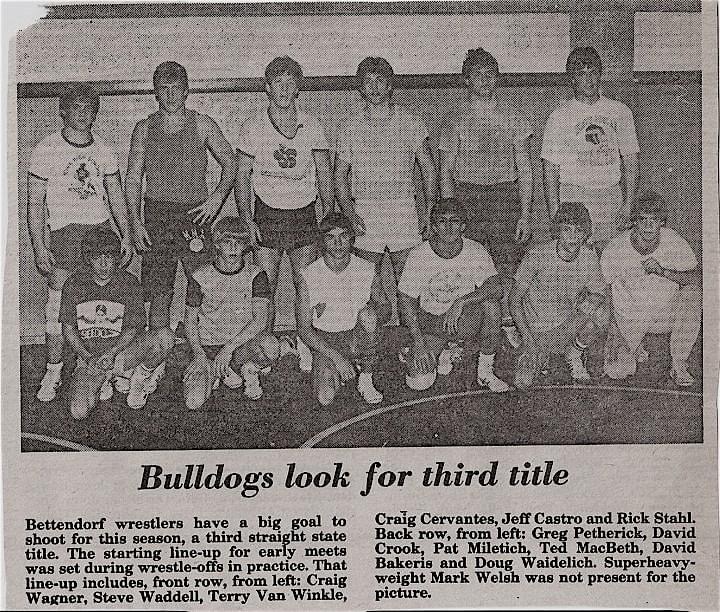 Pat Miletich was born in Davenport Iowa on March 9, 1966 to parents of Croatian descent. His Croatian descent along with his fighting/competitive prowess earned him the nickname, “The Croatian Sensation” later down the line. He was raised in what has been described by his wrestling peers as the “tough” part of Bettendorf. An area that produces blue-collar, hard working individuals who are perfectly suited for wrestling. Pat began wrestling at the age of 5 and continued all the way through the Middle School and High School wrestling scenes at Bettendorf as well as some collegiate wrestling at Kirkwood.

In high school, Pat attended Bettendorf HS and was coached by Hall Of Fame Head Coach, Franc Freeman. Freeman made such a profound, positive impact on Pat’s life that when Freeman passed away, Pat wrote a public statement on Facebook about the crucial, positive role that he played in Pat’s life. Here is Pat’s statement:

PAT MILETICH: Cannot say enough about how this man (Freeman) impacted my life in a positive way. Bettendorf became the home of monsters in Iowa HS wrestling and he was the scientist behind it all. A great moment I remember is when we wrestled Iowa powerhouse wrestling school, Cedar Rapids Prairie in Cedar Rapids. The gym was packed to capacity and several of the University of Iowa’s wrestlers were in attendance to watch the meet. The Zalesky brothers, Barry Davis and several more were there. Men we all idolized at the time. Needless to say, we were all very nervous as a team for these were very unfriendly waters. Coach Freeman knew exactly what to say to us. He stormed into the locker room and yelled, “you know why these people are here?!?!?!” We patiently waited for the answer as he glared and scowled at us all. Then the words of enlightenment bellowed out of his mouth, “all these people are here because YOU are here!!!” Carried by his words we went out and crushed CR Prairie. It wasn’t even close. Rest In Peace, Coach Freeman. You did so much for so many young men that it’s impossible to calculate the amount of positivity you brought into this world. We are all indebted to you for instilling work ethic, toughness and grit into all of our lives. Thank you. 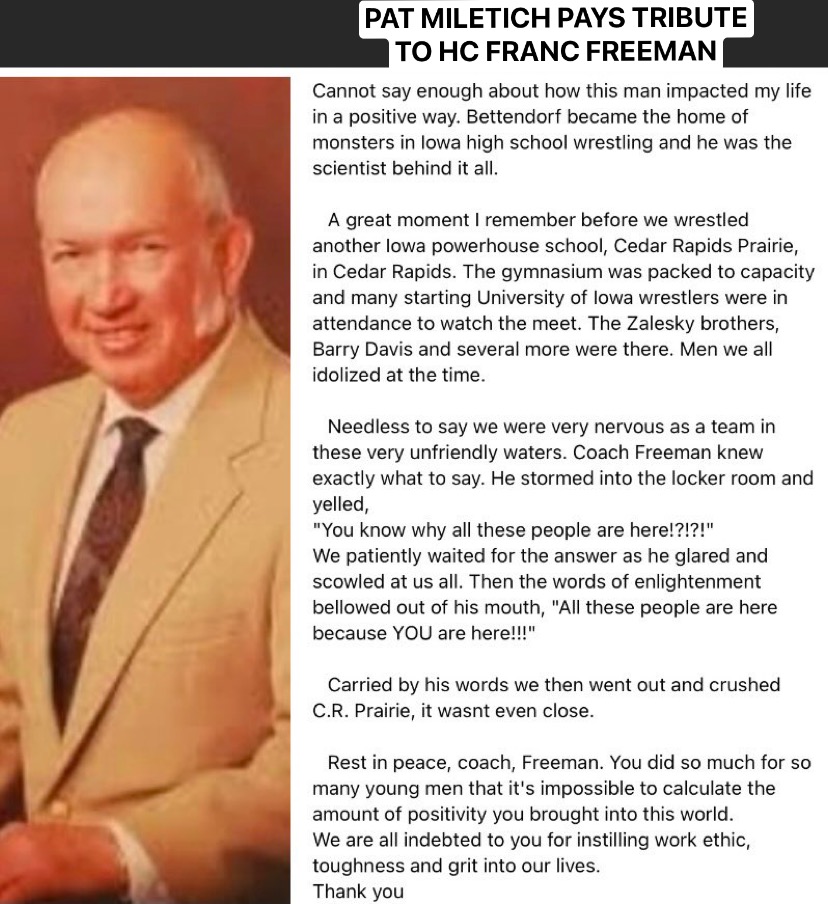 If anyone for whatever reason had any doubt as to the impact that wrestling had on Pat’s life before reading this article, all doubt should be alleviated after reading that statement.

Pat was a very competitive wrestler and as a Senior in HS, he qualified for state for the first time with a 17-5 record and ended up placing 5th there. In the first round, he was defeated in a nail biter by Tony Hanson of Waterloo West who was the eventual state champion. He lost by the score of 3-2. A couple months ago, I posted a bio about Tony Hanson’s wrestling career on my Facebook page and Pat commented on the article, which sparked the following exchange between the two: 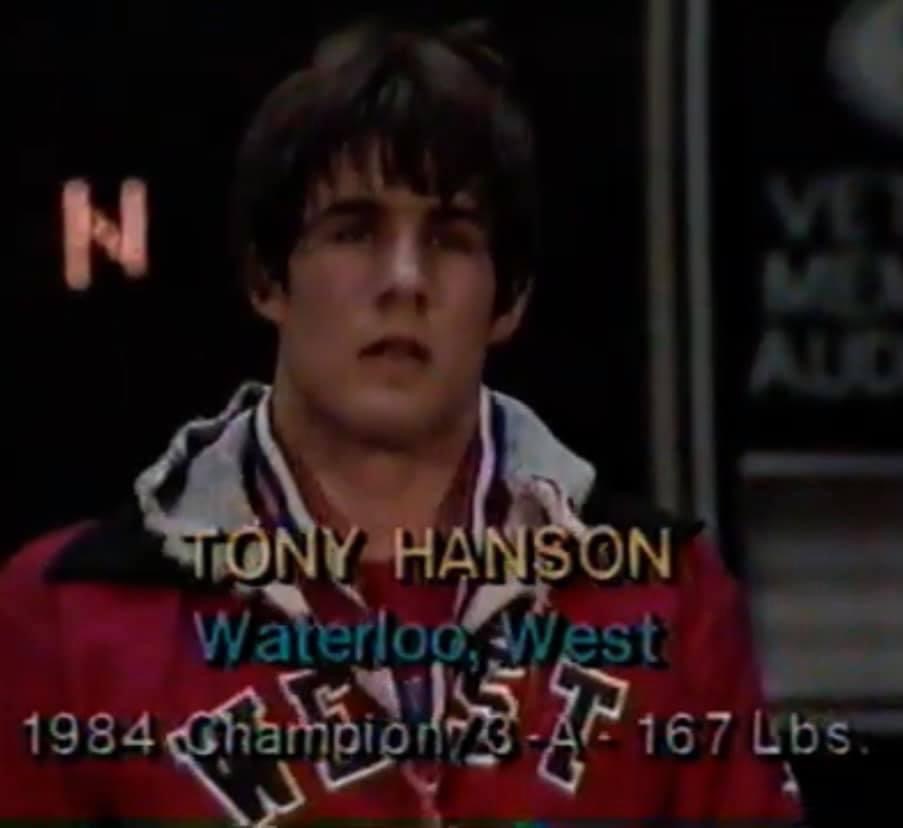 PAT MILETICH: Hanson was a smart wrestler and tough as nails.

TONY HANSON: That was a tough match. It could have gone either way and I remember it like it was yesterday. Congratulations on the great success that you are having.

PAT MILETICH: Hope you and the family are doing well. Losing to you made me hungry later in life and I have you to thank for that.

TONY HANSON: I hope you and the family are doing well, too. I hope to see more successes from you in the future. 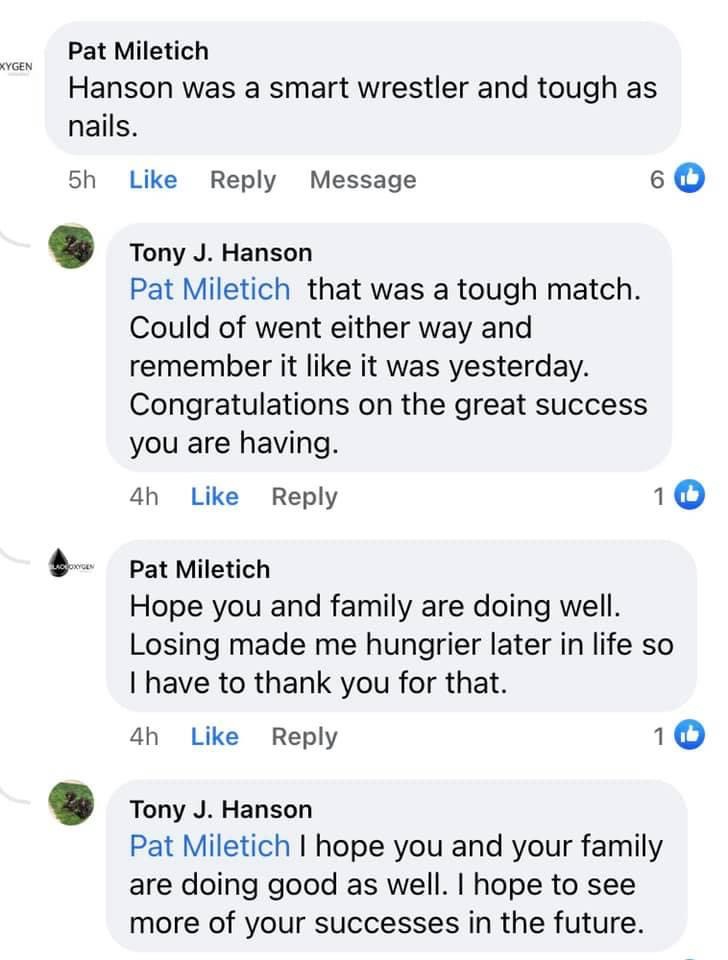 I thought that was one of the coolest exchanges I’ve seen on my page since I started The Pin Doctors. I don’t know if those two had ever even spoken to each other after the match took place in 1983 or heck, I don’t know if they ever met before it! Whatever the case, that was so cool and a lot of people could learn a great deal from the maturity that both of those men showed in that exchange.

Following his loss to Hanson, Pat was sent to the wrestle-backs where he had to face a wrestler named Randy Ewing from Fort Dodge in the blood round. Pat ended up defeating Ewing and this secured Pat’s eternal status as an Iowa HS State Wrestling place winner. He was officially top 6. This was a huge win, for Randy Ewing would win state the next year. Pat’s next match was against Chris Geneser of WDM Dowling, which he lost, which put him in the placement match for 5th and 6th place. He ended up defeating Dave Christ, a Junior out of Dubuque Wahlert, securing a 5th place finish at the state tournament for Pat. 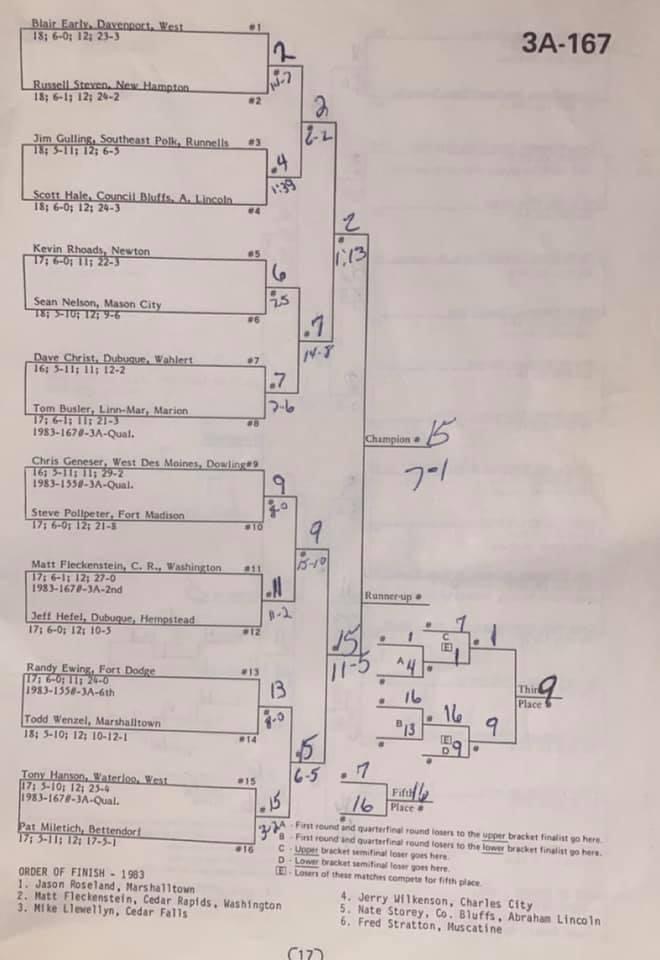 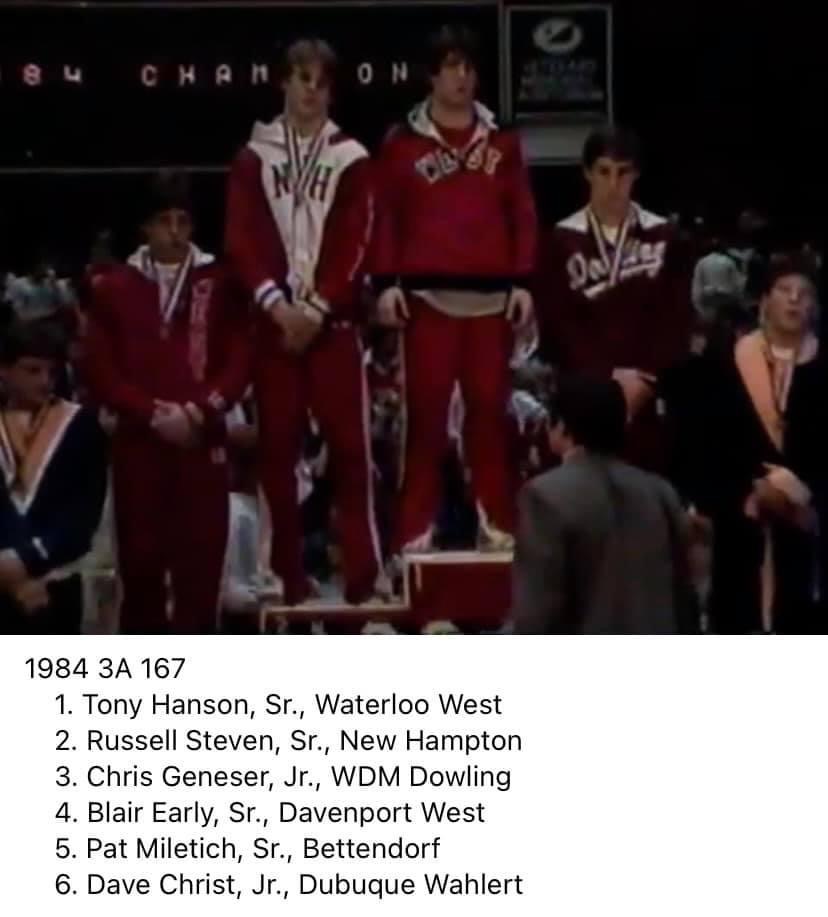 I ended up asking one of Pat’s friends and teammates out of Bettendorf named Craig Cervantes to describe Pat Miletich as a wrestler and as a person. This is what Craig had to say in regards to his old teammate, Pat Miletich: 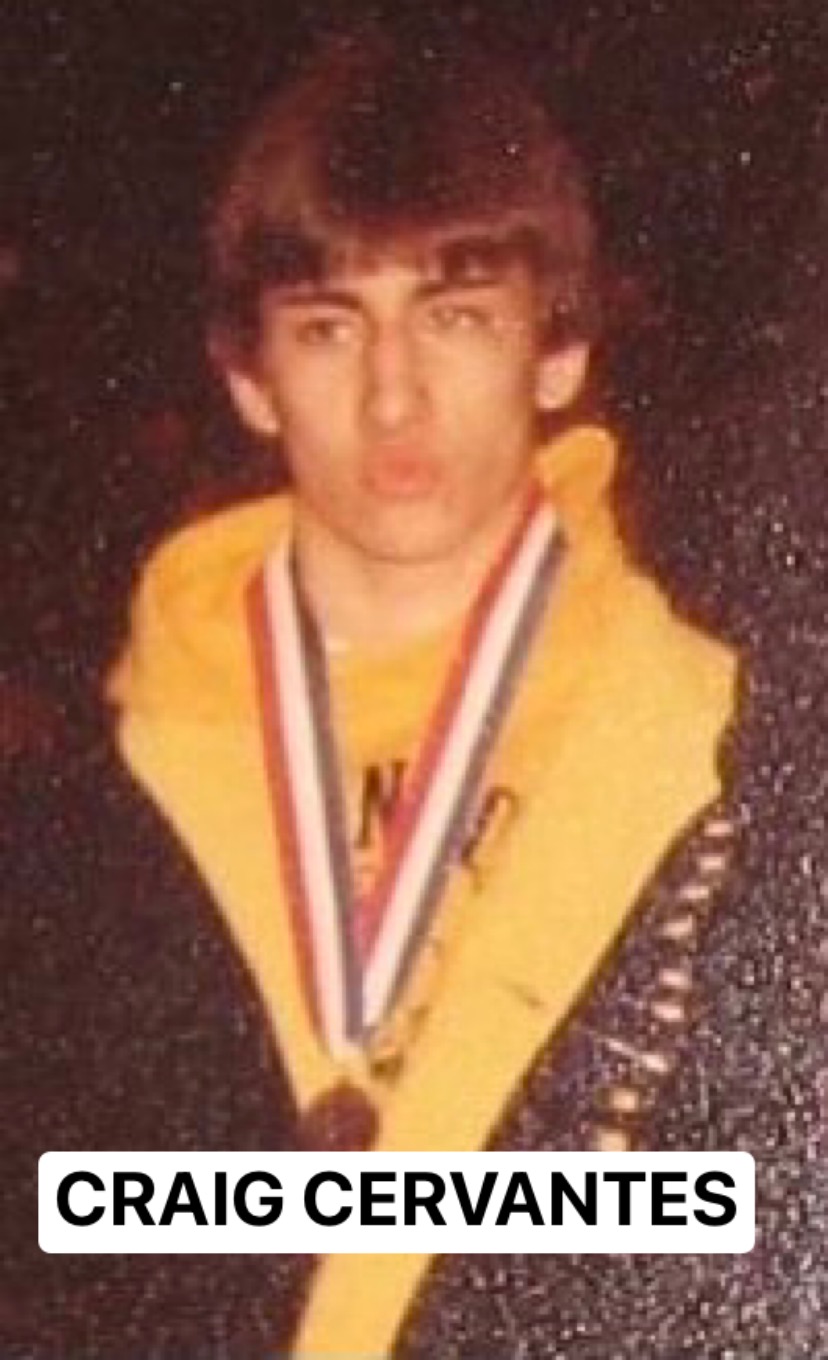 CRAIG CERVANTES: Pat Miletich came from a really tough part of town in Bettendorf!! It was a neighborhood with “blue collar” tough kids who were perfect for football & wrestling at Bettendorf Middle School and HS. Pat was definitely a brawler on the mat at Bettendorf HS. He had ok technique, but definitely more of a scrapper/brawler. Big time foreshadowing before he became a famous UFC World Champ in the mid ’90s. When he got into the UFC in the early stages of its infancy, a lot of Bettendorf guys weren’t surprised. At Bett back then, our legendary late coach Franc Freeman kept it pretty simple with snap downs & spins, doubles, singles, half nelsons, arm bar series, & especially cross face & near side cradles. I remember Pat doing mostly double legs & then going for the half or arm bars, pretty simple moves – “bread & butter” moves. To further elaborate, Pat would work the head a lot with snap downs & go behind takedowns. And he’d hit stand-ups from underneath. His first love was football & he was the nose guard starter on defense his Junior & Senior year. He was a terror on the football field & not real big either. Maybe 180 lbs. in the fall. I think he wrestled at 167 his Sr. year. As a teammate & person, Pat was all about Bettendorf pride & loyalty. He bled black & gold Bett football & wrestling. He was a very supportive teammate & years later this would come out when he was a UFC coach. He was the nicest guy back then & still is today, very down to earth. Always kind to every single person he met.

Pat had aspirations of playing football in college, for he was an All-State nose guard on the gridiron, but despite these aspirations, he went on to wrestle collegiately for Kirkwood CC. However, his mother developed heart problems, he left school to care for her. Miletich has stated in past interviews that he actually began fighting to help pay her bills. 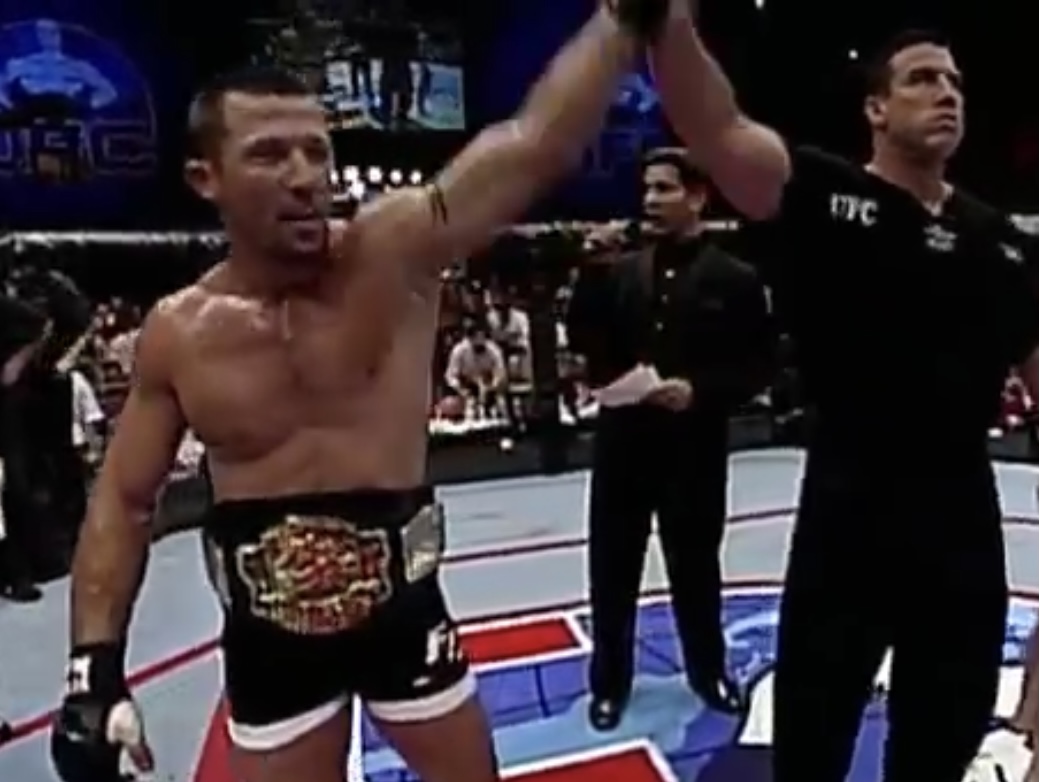 At age 26, Pat began his MMA training. He started out at Tarpein’s Dojo in Davenport, IA with Grand Master Nick Tarpein. A lot of what he knows about karate was learned there. This is also where he was introduced to Brazilian Jiu Jitsu for the first time. With Pat’s extensive wrestling background, BJJ came naturally to him. When he paired wrestling with BJJ and added to it his strong foundation of boxing and karate, he decided that the route he was going to take for his future path would be MMA. This route ended up being the correct one to take, for he became one of the most successful Mixed Martial Artists and trainers in the world. As a competitor Miletich Compiled a 29-7-2 Mixed Martial Arts record from 1995 through 2008, becoming the first Ultimate Fighting Championship welterweight champion at UFC 16 in 1998. Eventually, he founded Miletich Fighting Systems-based out of the Quad Cities in Iowa. Miletich Fighting Systems was a mixed martial arts training organization. Miletich Fighting Systems has trained over 90 televised fighters and 11 MMA world champions. It has been the training camp for fighters such as Matt Hughes, Tim Sylvia, Jens Pulver, Robbie Lawler, and Jeremy Horn. MFS is widely regarded as one of the most successful MMA camps of all time. 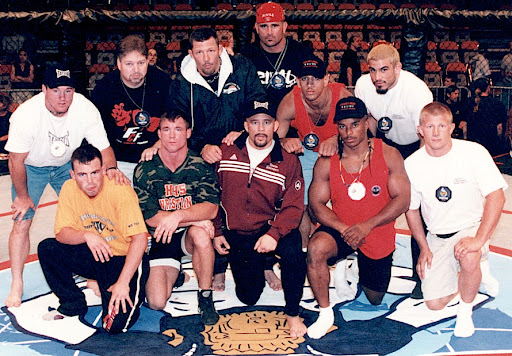 Pat also went on to other ventures, such as providing color commentary for MMA, hosting a podcast and becoming a motivational speaker. Pat has always taken a very firm stance against bullying.  He is a vocal advocate for programs and activities that could teach kids self-defense that could help protect them from any potential bullies they encounter. One of his main “go-to’s” in terms of programs that he encourages kids to try out is none other than the Bettendorf Youth Wrestling Club. Miletich has never lost site of where he came from and is very proud and supportive of the Bettendorf wrestling community (as well as the wrestling community in general) to this day. 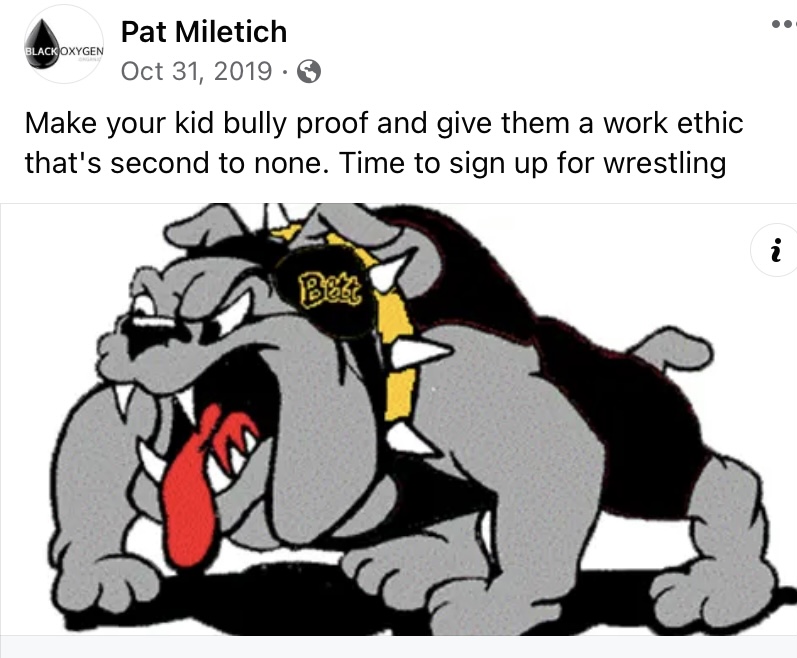 In 2011, Pat was inducted into the National Wrestling Hall Of Fame. He received the George Tragos award, which honors wrestlers who have adapted their skills to excel in mixed martial arts. In 2014, Miletich entered the UFC Hall Of Fame. And with as historically great as Pat’s career has been to date, he has the sport of wrestling and the positive role models who were part of his life through wrestling to thank for so much of his success. 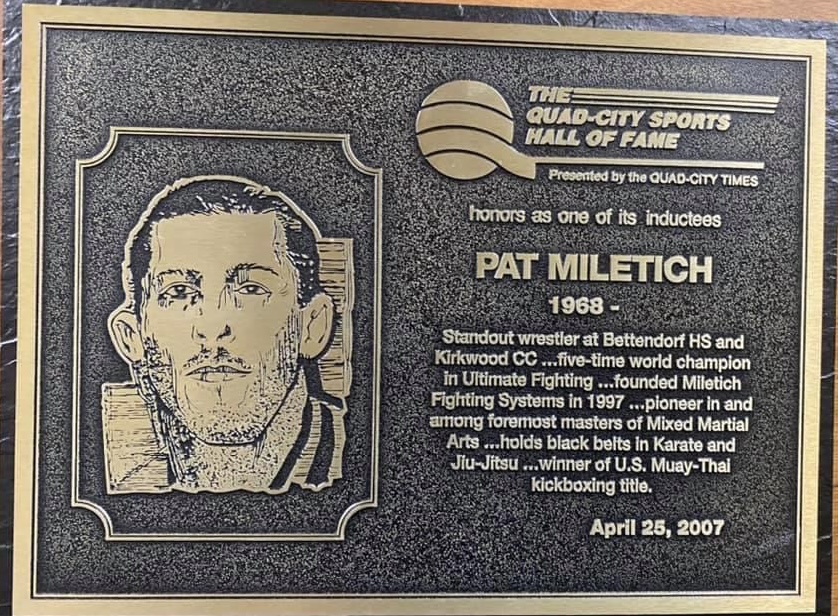 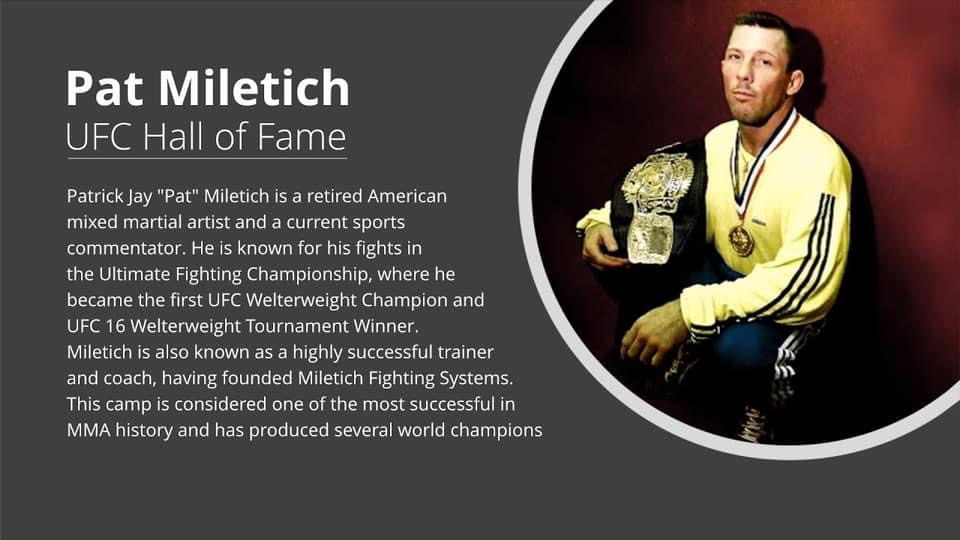