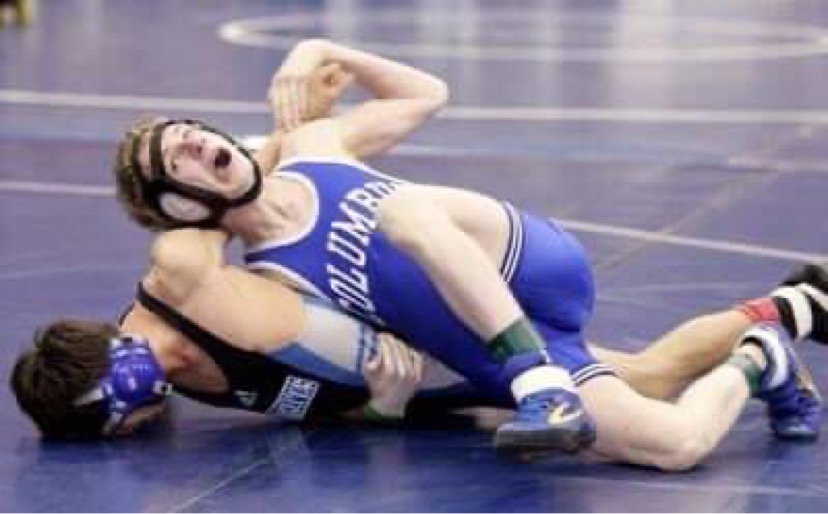 I hadn’t met Hayden prior to doing this, but remember reading about him, with him being a fellow Southeast Iowa .  He actually went back and forth with my first cousin, Jonathan Swafford.  Also, after getting to know him a bit, we found out that his old roommate was in the same band as my brother, Justin…which is The Sapwoods.

What school did you wrestle for?

I wrestled for L-M in elementary through my freshman year and was JV behind Caleb Bashore who was a stud. He placed at least twice. Then I transferred to Columbus Junction.

I was in the class of ‘09, but a weird loophole let me graduate the summer after my junior year. I technically graduated from Muscatine.
Who or what encouraged you to give wrestling a try?
My dad. He was always a huge wrestling fan.
Do you have any family who wrestled or wrestles currently? Parents, children, brothers, etc.? How did they do?
I had a cousin, Wes Snyder, who went to Martensdale St. Mary’s in the late 90’s. He qualified at least once. He’s still salty that he lost in the blood round (before they went to 8). My brother in law, Jordan Terrill, was strong as an ox and a serious scrapper but could never get over the hill and never made it to state. He has a 3 year old son that is following in his footsteps and already loves rolling around on the mat. Aside from that my family is mostly just wrestling fans.
What were your youth results? Any rivals there?

I was pretty bad honestly. I made it to AAU state 4 times but always came up just short.

My biggest rival was Tony Simon from Highland. I could never beat that kid. I beat him one time 11-6 in I believe 6th grade. We probably wrestled 30 times. Almost every tournament I went to in SE Iowa I pretty much knew I was gonna get second at best.

I only qualified my sophomore year. I won my first match against Tim Neegard from Rock Valley and then wrestled Joe Colon in the Quarters. In the placing match I wrestle Marcus Breeden from Maquaketa and lost 5-4 on a late takedown after a questionable call. He was a though kid. Placed 6th twice I believe.

Just my entire youth experience in general. I was never very talented. I could’ve been a lot better than I was. Things finally clicked when I was a freshman and I think I would’ve been a SQ of not for being behind a hammer.How would you describe your wrestling style? I hate to say it, but lazy. On my feet I would try to rope opponents into a carry and the on top an arm lever was my best weapon. It basically took me to state. I was terrible on bottom. My wins usually either ended in a pin or at least a major. If I lost I would usually get pinned. I don’t think I was ever teched.

I didn’t really have a rival I went back and fourth with multiple times. There was a kid from Wapello, Arturo Jilpas, who was the strongest 103 I ever wrestled by far. He pinned me the first time we wrestled my sophomore year, but I beat him I think 9-3 at conference. He had me struggling to stay off my back the entire third period. Also John Swafford (😡). I pinned him in a dual but he pinned me at the Highland tournament. Never got to wrestle him again unfortunately.

Plein hands down. God, I hated that guy at the time. But I couldn’t have ever asked for a better coach and mentor.

Was your team competitive in HS/college?
We had some absolute hammers. Obviously Noble and Ball. Jay Meyerholz and Jake Keller were studs too. We were pretty solid.
Who was your most influential wrestler that you looked up to growing up?
Luke Eustice off the top of my head. I loved watching that dude as a kid. Obviously Gable.

That’s a though one. I could go with an obvious one but being king of biased I would put Seth Noble into that conversation. If not for a tough loss in the semis his freshman year and the finals his junior, he had a legit shot at being a 4x champ. Jimmy Waters is another one that I don’t think gets mentioned enough.

Joe Colon and Ivan Wolfensperger. Those two were absolutely relentless. Brandon helgeson is another one. He never won it but I believe he placed 3rd twice and was an absolute hammer. His only obstacle was Colon and Wolfensperger. Another one is Ryan Mango. He was from Missouri but I wrestled him at Ft Madison one year and he bumped up to 98 from 84 and dominated. He only beat me like 3-0 but I was never even close to scoring.

Definitely Dake and Burroughs.
What music would you listen to back in the wrestling days?
A lot of punk and classic rock. The clash and zeppelin were my go to.
What was the most upset you ever felt after a loss?
Losing at state my sophomore year. I was absolutely devastated. It stings more now looking back.
If you could go back and change one thing about your wrestling career, what would it be?
Quitting. I wasn’t in a good state of mind halfway through my jr year and I still regret not sticking it out.
What was your best wrestling memory or accomplishment?
Winning the Centerville tournament my sophomore year. My bracket was pretty loaded. I beat a kid from Bondurant in overtime who was ranked 5th I think. And I was the only one from CJ to win the tournament, so hey, at least I have that over Ball and Noble, lol.

I think it’s fairly even. The conversation gets more interesting when you talk about guys from 40 years ago vs now.

No. Still follow it though.
What other sports did you play?
Cross country. I still hate running.
What are your favorite sports teams?
Raiders and Golden Knights.
What are your hobbies other than wrestling?
I like to play guitar badly. I’m a horror movie buff too.
How has wrestling shaped you as a person to this day?
Aside from the obvious, it taught me a lot about just preserving through any situation. I would be lying if I said I have stuck with that mentality all the time but it has definitely helped me throughout the years.
What do you do now?
I work in the meat department at a large Midwest grocery store chain.
Are you still involved with wrestling?
Not as much as I’d like to be. I still follow it. I have a nephew that loves it so I hope to become more involved in the coming years.

Just stick with it. It’s a process. Grind. It’s not gonna happen overnight.
Any chance we see you wrestle again at an Old Timer’s tournament?

Lol if the opportunity happened to arise, maybe. I’d have to take a week or 2 off work in advance to recover though.

Brode Hills. I grew up wrestling with him at practice and at tournaments and he always whooped my a**, but he was always humble about it. He was a good kid to have in the room and he’s still a really good dude.