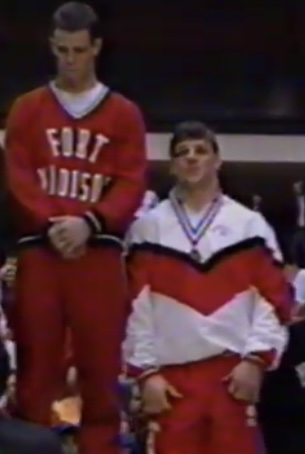 Kind of crazy, I kicked off this series last week and began on Matt Otten of Manly-North Central vs. Shane Light of Lisbon and asked for requests for future articles when I posted it. I received several. Ironically, the first request that I received was this match-up…. This took place in the Iowa HS State Quarterfinals between returning 3A 171 state champ, Jason Crooks of Fort Madison and returning 2X 3A 189 lb. state champ, Tony Wieland of Cedar Falls. 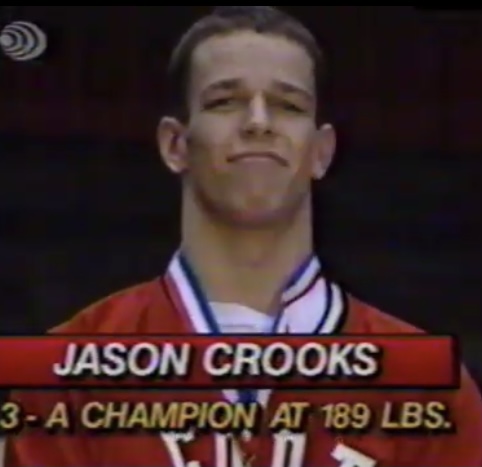 I wrote that it was “ironic” that this match was the first request and that was not a mistake. What could possibly be ironic about this matchup for me?! Well, Jason Crooks’s father, Ron Crooks is the one who talked my uncles and the  father into quitting basketball trying wrestling when they were in Junior High. He was their HS wrestling Head Coach. The way my brothers and I were raised into this sport has a pretty significant connection to how Ron Crooks coached my father and my uncles when they were doing it.  He has been described by all 3 as one of the most important individuals in their lives and it’s very possible that had he not talked my uncle Brian into wrestling, this site may not exist. I would probably have a dorky basketball site right now if it were not for Ron Crooks.

Here is what my uncle Kevin had to say about Ron Crooks:

KEVIN SWAFFORD: Coach Ron Crooks talked my brother Brian into trying it out and I followed. I don’t know if it’s always possible to express in words how someone’s had an impact on your life and on your character, and in molding you as you grow up and mature. Coach Crooks obviously had an impact on me and our whole family not just us 3 boys. You couldn’t measure his investment in you with the amount of time he spentworking with you individually.  But it all centered around hard work and fostering a family like culture – he persuaded us to buy into his process and vision for finally putting our school on the wrestling map, and that vision started with us. All of our coaches were like that but everything starts at the top.

So yeah, the Crooks family is a very important family to us. I think it goes without saying that my family was deeply entrenched in the Crooks side of this matchup when it took place and hopefully that’s understandable. We go back with them. Doesn’t mean that we don’t think the world of Tony Wieland.

Here are some things that made this matchup notable:

* This was a matchup between two returning state champions in the quarterfinals.

* This was at 3A 189, a weight that is usually won by Seniors and returning state champions are few and far-between once you reach a weight this high, let alone 2 in the same bracket…who end up meeting in the quarterfinals…

* Crooks only had between 2-4 losses in his last 3 years of HS wrestling…. I don’t think Wieland had anymore than 2 losses total in his final 3 years of HS.

* Crooks met up with a Darrell Wieland from Cedar Falls in the quarterfinals the year before, which he won. I don’t know this for a fact, but I am guessing that Tony and Darrell are related, likely brothers.

* Off the top of my head, there were at least 3 other guys in this bracket who would be finalists the next year (Daggy, Tecklenberg and Cole) and two of those guys were champs (Cole and Daggy).

* Both guys were great football players along with being elite wrestlers. After HS, Crooks played football for the Iowa Hawkeyes and ND State as well as wrestled for Wartburg and ND State.

* Wieland ended up wrestling at UNI where he was teammates with Crooks’s HS teammate and fellow state champion, Nick Flach. He was an AA there. Nick Flach was instrumental in helping Josh Budke train to defeat his Senior year rival, Jesse West in 1996. Budke is from Cedar Falls and was a HS teammate of Wieland’s.

* Wieland defeated Crooks just a few weeks earlier at the Urbandale tournament. Big thanks to Matt Nelson for that info!

Wieland was an absolute beast. About the closest thing this state has ever seen to a real-life Hercules. 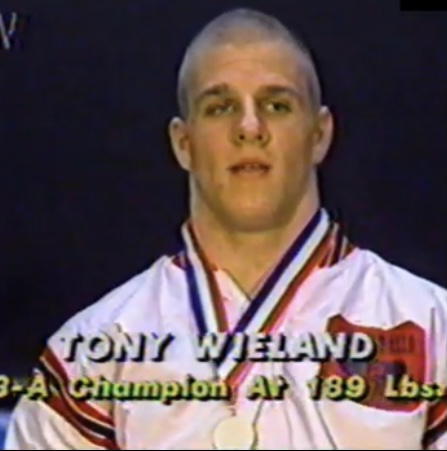 Ya know, on one hand, I look at something like this and think, “what the hell were these two doing meeting in the quarters? That’s a finals matchup, come on… tournament needs to be seeded.”  Then on the other hand I’m thinking, “this is what makes every round of the Iowa HS State tournament great! Two guys like Jason Crooks and Tony Wieland can actually meet there!”

HERE IS THE INFAMOUS MATCH BETWEEN JASON CROOKS OF FORT MADISON AND TONY WIELAND OF CEDAR FALLS! 1995 3A 189 QUARTERFINALS:

Next post: Remember The Wrestler: Kelly Fox of Guthrie Center