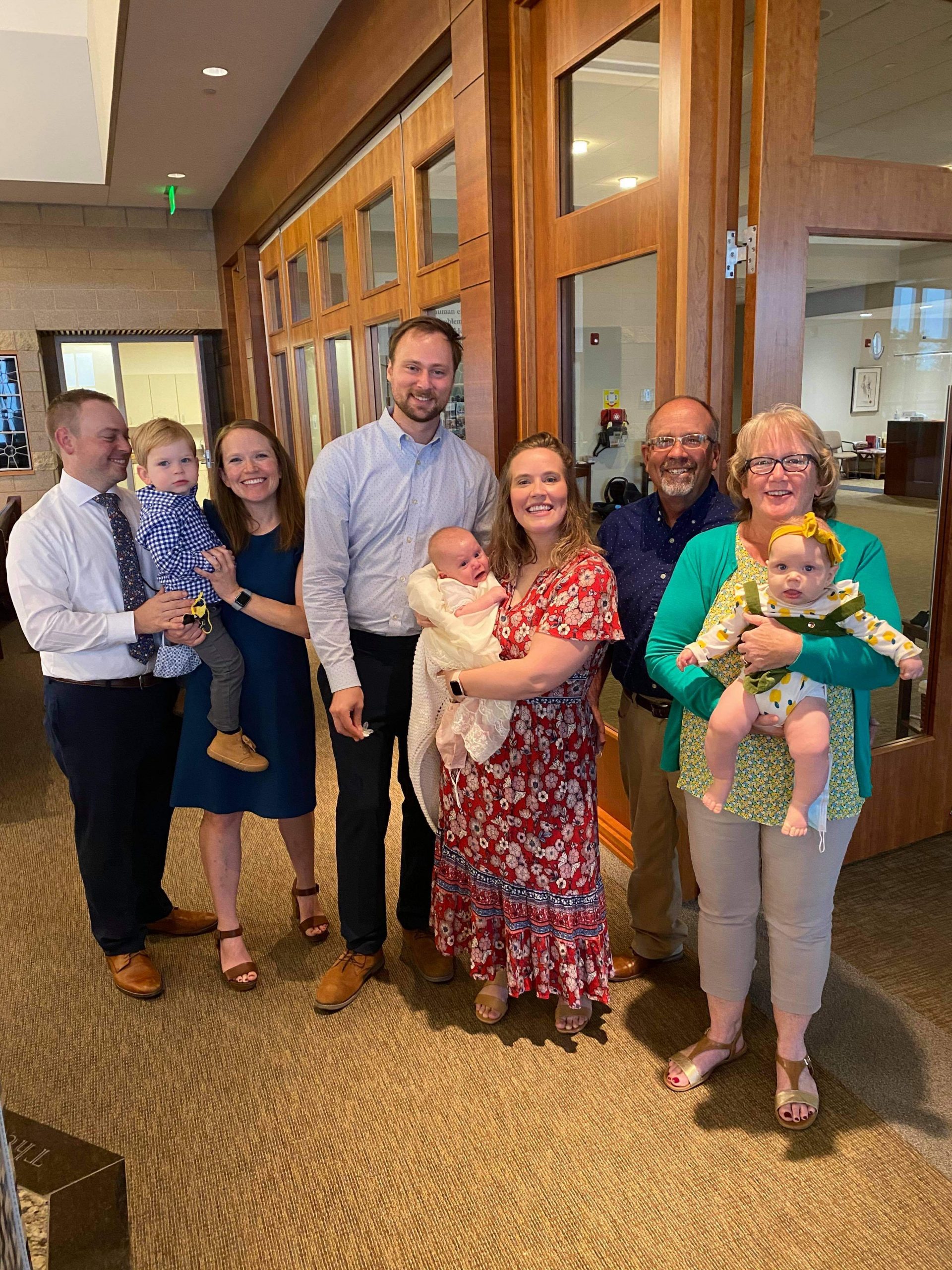 This one has been a long time coming. For one, I don’t do nearly enough of these for guys in the 70’s era and earlier. I just simply don’t know as much about them as I do other eras, but I’d like to change that! And will try to!

Secondly, it’s been a long time coming that I get someone from Britt (later West Hancock) for one of these considering their rich wrestling tradition. With the exception of posting Mark Sanger’s finals pin from his Senior year, the only Britt-West Hancock guy who has made the page was a wrestler named Tate Hagen, who I wrote about last year for having a great football season. Tate later went on to win state. So yeah, it’s taken me way too long to come up with at least one “Remember The Wrestler” article for them,, for if there’s any community that’s deserving of some props, it’s Britt-West Hancock. It’s one of the all-time greatest programs in state history. The school has brought home 46 individual state championships, which ranks eighth in the state. As a team, Britt brought home five state championships, as well as nine runner-up finishes and four third place finishes. Britt has 14 combined top-two finishes which ties them with Osage for fifth best in the state. Britt was the home of Iowa’s first ever 4X state champion, Bob Steenlage, who graduated in 1962.

Britt truly hit their stride in the early 70’s with names like; Brent Hagen, John Hagen, Cliff Howlett, Jeff Stevenson, Bruce Gayken, Dave Howlett, Mark Stevenson contributing for Britt teams who won back to back to back titles in 1971-1973. And they’ve had numerous guys since who have made etched their names on the ever-present, ever-growing wall of champions since, such as Pat Kelly, Ron Finch, Rick Sanger, Mark Sanger, Paul Jenn, Tate Hagen, etc.  I realize I left out a ton…not intentional. It’s just a lot of ground to cover with a program like Britt. 🙂

Cael Sanderson made history by becoming the first ever 4X D1 national champion in NCAA history, but a somewhat obscure fact is that he had one loss his redshirt season. Who was it that beat him? A native from Britt…. Paul Jenn. And btw, MAYBE we can watch that match soon, for I have spoken to someone who has it on VHS. 😉 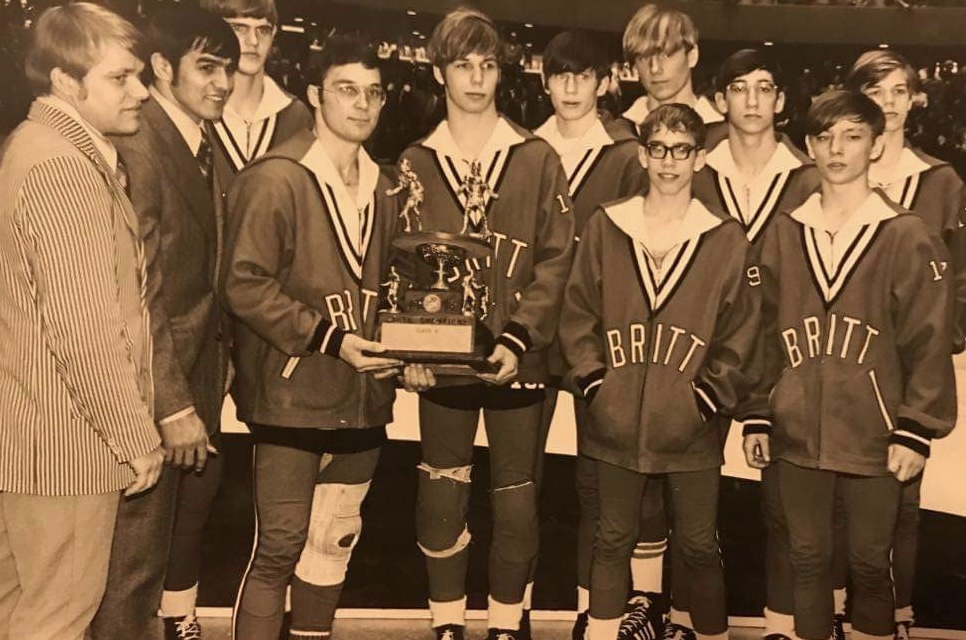 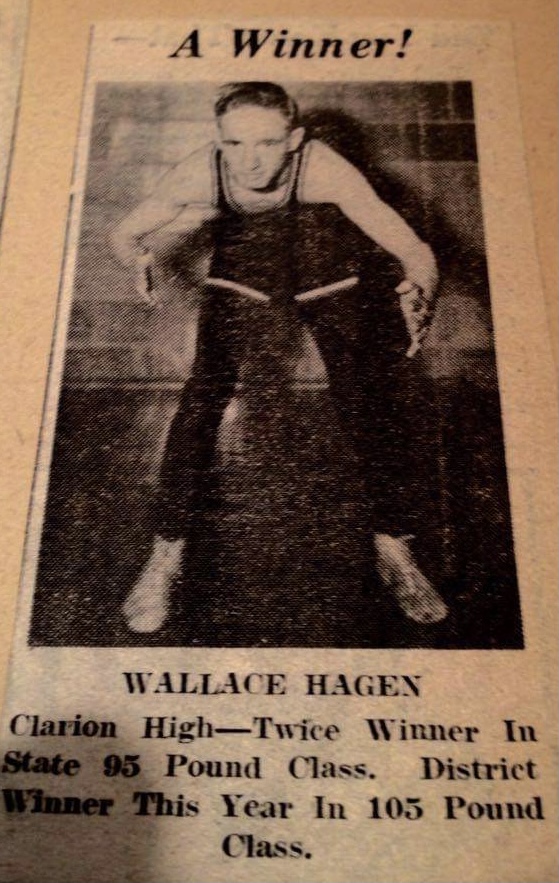 Wally Hagen, the father of the legendary Hagen brothers! 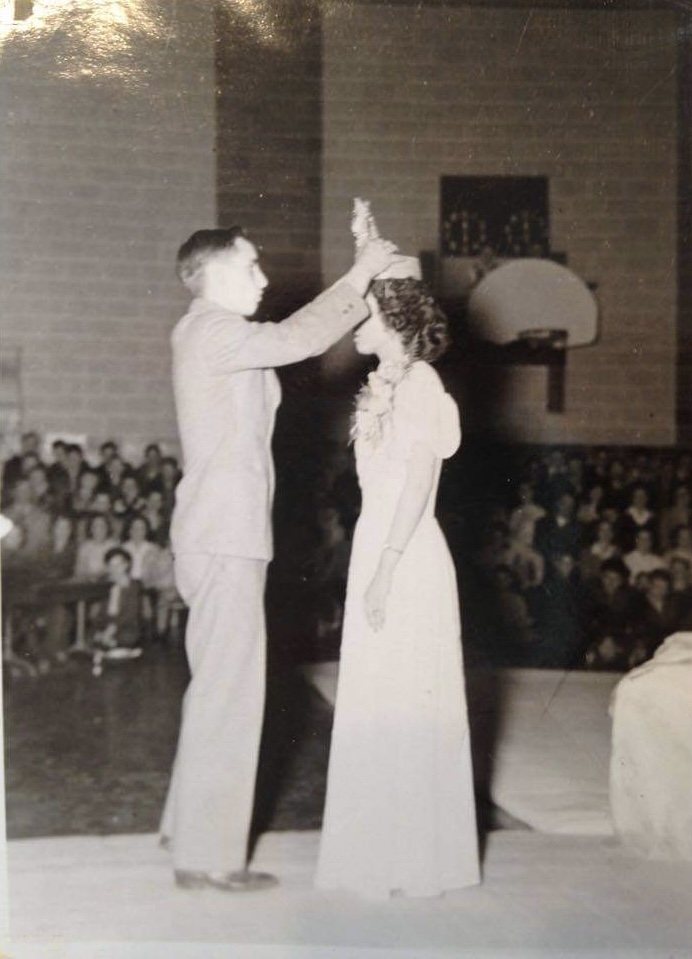 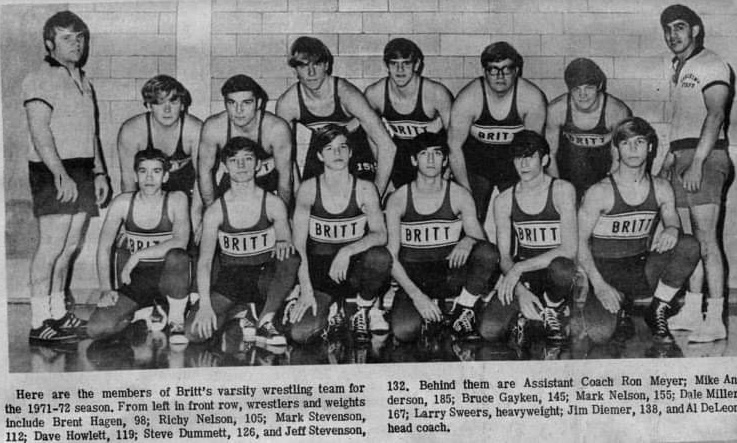 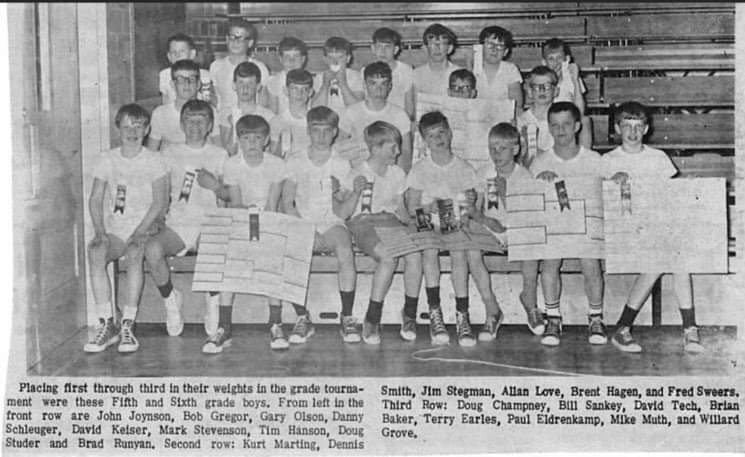 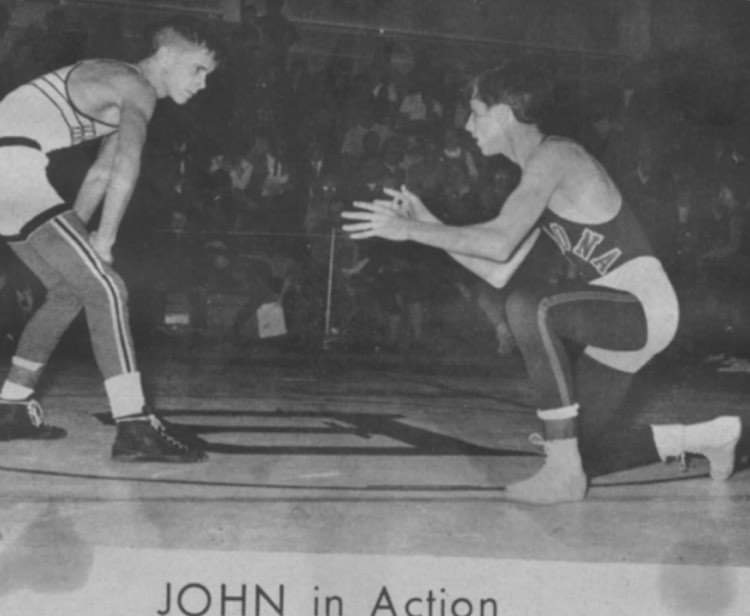 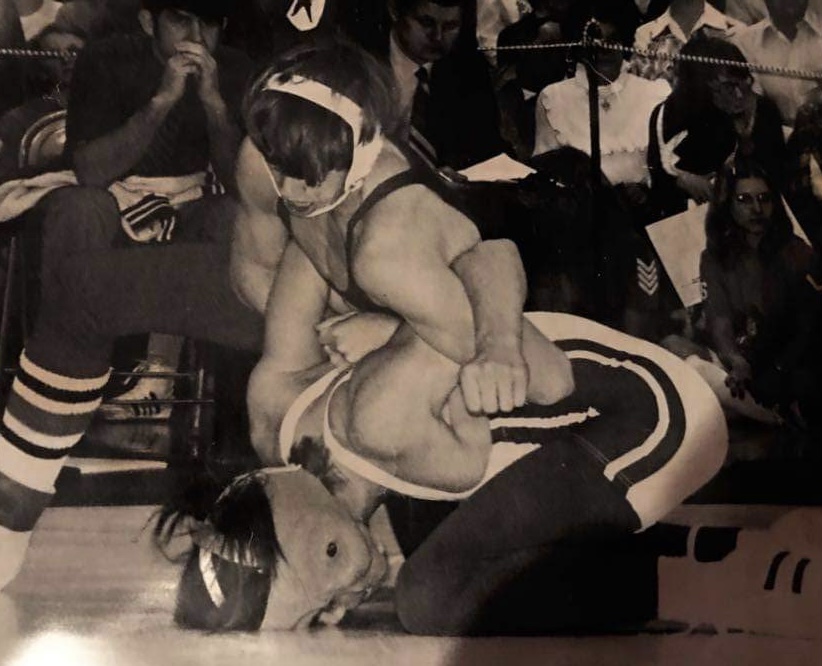 We didn’t have youth wrestling clubs back then. I would participate in Britt’s elementary wrestling program. We would practice for three weeks and have a tournament with Britt kids at the end. I wrestled for Britt High School. I wrestled at Mankato State and UNI in college.

My dad had a great influence on the Hagen brothers’ wrestling careers. He had a true love for the sport..

My dad, Wally was a two time state champion for Clarion High School. My mother Mary Lois was the 1945 State Wrestling Tournament Queen. My older brother John was a four time state finalist. He won three state Championships while going undefeated his last three years. My cousin Joe Rohrer was a state champion for Clarion. My nephews Austin and Adam wrestled in high school in Wisconsin.

I only wrestled in one youth tournament in Junior High. Mark Stevenson and I won the Harlan tournament.

My record in high school was 111-4. I lost my first high school match by fall. I lost to Dave Morgan from Eagle Grove twice and Rich Wilson from Belmond.

State champion as a freshman, sophomore and senior. State runner-up as a junior.

The hardest challenge was cutting weight especially in college. I struggled a lot with weight my sophomore year in college. I weighed around 150 lbs at the beginning of the season. We wrestled 20 duals during the season . I wanted to wrestle at 126 during the season and cut to 118 for tournaments. My college coach Rummy Macias wouldn’t let me do that. Thanks to my high school coach Al Deleon we arranged that I could workout at Mankato East High School until the division II national tournament. I won the national title at 118. I think I weighed 150 for the finals.

I was a very controlled wrestler in high school.I would never leave my comfort zone. I started to enjoy wrestling on my feet when I developed a fireman’s carry. My college career was very high scoring. My senior year at UNI I had a lot of matches where I scored 30 points or more.

My junior year I wrestled Rich Wilson too many times. The worst part was he won the only one that counted. I enjoyed wrestling Dick Perez from Hampton.

I had great coaches at every level. My junior high coach was Ron Meyer. Coach Meyer would be my workout partner on cutting weight days in high school. My college coaches were Rummy Macias at Mankato State, Chuck Patton and Don Briggs at UNI. I learned a lot from them. The man who had the most influence on my life and career was Al Deleon. He taught us technique, conditioning and mental toughness. He convinced us that we deserved to win. I was so lucky to wrestle for one of my heroes.

I was on some great teams. Britt won state my freshman and sophomore year. We finished 2nd my last two years. I was on a Division 2 national runner-up at UNI.

My freshman year in 1972, Britt qualified 9 out of 12 wrestlers to State. All nine wrestlers placed 6th or higher.We had six in the finals with three champions. My senior year in 1975 we only had 3 wrestlers qualify. All three of us won state.

I have always been a huge Oklahoma State wrestling fan. My favorite Cowboy was Yojiro Uetake.He was a takedown artist.My brother John another hero would practice with me on our mat in the basement

I would like to see a dual between the North Central Iowa stars of the 70’s and 80’s against other all star teams from around the state.

Spencer Lee is a great wrestler and seems to be an even better person!

The easy answer would be my loss to Rich in the finals, but every loss sucked.

Once again my finals lost wold be easy, but my last two years at Mankato State were tough. I wish I would of handled that better.

I was a finalist every year I wrestled in high school and college.

I wrestled against some great teams and wrestlers during my career. One person doesn’t really standout.

I wrestled only during the season. I did attend a camp in summer in Albert Lea. I did wrestle one freestyle tournament after my finals loss my junior year. I broke my arm . I started to lift weights and practice more after my senior year in high school.

Better… darn good I think. In fact, I think the wrestler of my era would be very competitive . We had some great teams in Northern Iowa. I still remember having full c squad, b squad meets before the varsity dual. I remember our district in AA would have multiple state champions and place winners. We had a tryout at Britt between returning state champions.

I wrestled in college at MSU and UNI. I was a D 2 National champion and a two time runner-up.

Did you play any other sports in HS?

I did play baseball in high school. I taught and coached at Denison High school for 32 years.

I currently work at North Scott Foods in Eldridge .

Wrestling taught me that if you work hard good things will happen.

I watch a lot of high school wrestling. My wife Carol and I attend Davenport Assumption meets. We live in the North Scott district so I am a Lancer fan also.

Try to be well rounded, wrestle but enjoy other things. Try to learn the proper technique first. I would start wrestling in tournaments in 3rd or 4th grade. Play other sports, find other hobbies and enjoy your youth. When you get to high school listen to your coach!

I still have one match left in me.

I have always told everyone that I grew up in the toughest neighborhood in the country. Between 1st and 3rd street SW in Britt we have had 22 state wrestling champs. I am proud to have wrestled for Britt . I was blessed to have great coaches and great teammates. Once an Eagle always an Eagle.

I have really enjoyed doing this. It has brought back some great memories. We only wrestled 10-12 duals and 3-4 tournaments. I still remember competing at the Eagle Grove tournament. You can never forget wrestling in Vets. We were lucky to wrestle in the 70’s.