WHO IS THE IOWA HS WRESTLING GOAT?!? The Case For Matt Fields, North Cedar 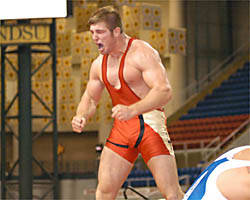 Matt Fields from North Cedar was good for attendance at the Iowa HS State wrestling tournament. Or let me re-phrase that… He was a force in ensuring that people who were in attendance at the state wrestling tournament stayed around to watch the bigger guys, for I remember a lot of people staying around just to watch him… which is great because it always upsets me watching people clear out of the arena once the big boys start taking the mat. I always thought it was disrespectful when people did that and it makes me kind of feel as if the bigger guys get short-changed in terms of the crowd response after they win their titles…  This wasn’t so bad when Fields was around, though. Or at least I am assuming it wasn’t, for I remember an entire group of Winfield Mt. Union cheerleaders staying around in 2002 just because they all had a collective crush on him… And a lot of other fans and fellow wrestlers wanted to stick around to watch him because the beat-downs he handed out and the athleticism he showed while doing so was something that was fun for them to watch.

Matt Fields made his presence known in a big way when he placed 2nd at state at a weight where you typically don’t see many underclassmen… 1A 115. He then went on to finish the last two seasons of his HS career undefeated and to my recollection, didn’t really have much trouble with that. He finished with a record of 137-11 which is incredible for a guy who starts his HS career at an upper weight and wrestles the remainder of his career there. He won the 2002 FILA Cadet Nationals title and 2003 Junior Nationals title.

He was an AA for the Iowa Hawkeyes in college.

Does Matt Fields have a case for consideration of Iowa HS wrestling’s GOAT? Well I’d say he did enough to at least put himself in the conversation.

Next post: How Close Were The 3Xers To Winning 4? Cole Pape, Robert Walker, Clark Yoder, Jim Lord…Plus Interesting Connections Between Them