Inside The Rivalry: Mack Reiter of Don Bosco vs. Justin Swafford of Mediapolis PART 1 OF 5 (INTRODUCTION) 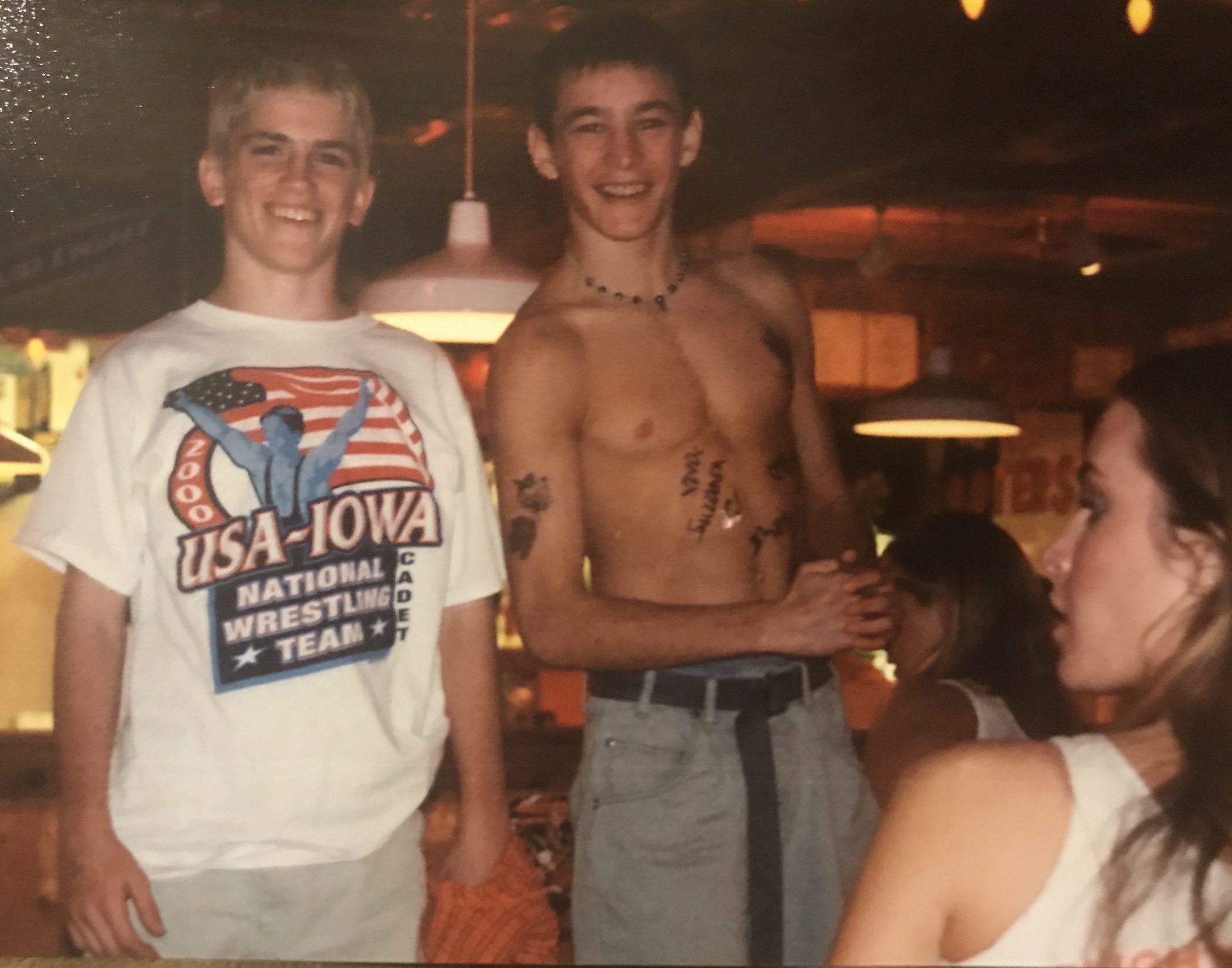 “One of my strongest attributes in wrestling was my mental approach. I never lacked confidence in myself when I put my foot on that line. I wouldn’t let myself walk out there until I had convinced myself I was going to win and I did that for every match I ever wrestled against anyone”

“I was confident before every match I ever wrestled and felt no fear. I knew what I was capable of doing and I had total confidence that I’d find it in me to display the top of my game. I never went into a match with Mack with the slightest notion that I would lose. I never felt this with anyone. That type of thinking will force you to lose. It’s counterproductive.”

Joshua Swafford (Justin’s Older Brother): I remember when Mack and Justin wrestled at a freestyle tournament at Iowa City High, there was an editor of a small wrestling newspaper in attendance who specifically came to that tournament in hopes of seeing Mack Reiter vs. Justin Swafford. They were only 8th graders at the time. The guy introduced himself to my mom and said that he was dead-set on taking as much video and pictures that he possibly could, for they impressed him so much in their battle at AAU State a few weeks earlier that he said, “you never know… this could be a couple of future NCAA Champions going at it as 8th graders…it’s can’t miss.” Neither Mack nor Justin ultimately accomplished that feat, but Mack was close and who knows what Justin could have done if his body didn’t fall apart among other things. The rivalry that these two had was a pretty big deal for a few years there. They met a total of 7 times. First time in the finals at freestyle state in 6th grade, the finals at AAU State in 7th grade, the quarterfinals at AAU State in 8th grade, IC High Freestyle Tournament as 8th graders, Manchester-West Delaware as 8th graders, Freestyle State Duals as Freshmen and finally, the last meeting they had was at Freestyle State Duals as Juniors. It was a rivalry that ignited a ton of fan commotion every single time they took the mat together. They were both known for their intensity, fire, stubbornness to give even a millimeter and people were on the edge of their seats every time it went down.

This rivalry was incredibly huge for my family. I know it’s the status quo to claim that you don’t care what “this person” or “that person” thinks of you, but I’m just going to be real… I don’t know if there was a wrestling family who’s respect we wanted to earn so badly than the Reiter family. For one, Mack knocked Justin off a pedestal in their weight range that he had occupied for 3-4 years prior to his first defeat in the finals at 7th grade AAU state. There was always this underlying feeling of, “prove to these guys that you weren’t just another win for Mack, but a big one.” Secondly, our family just had so much respect for the Reiter’s, for they were the quintessential great wrestling family on and off the mat. Terrors on the mat and off the mat, if you didn’t catch them in a moment of intensity, they were respectful, charismatic and very happy people. Our dad, Mark Swafford ended up becoming pretty good friends with Mack’s dad, Doug Reiter. Doug’s sense of respect, professionalism, wisdom and empathy left an impression on our dad that he still utilizes today. This rivalry was intense on the mat, but ever so valuable in terms of how the experiences affected people.

When these two met up, it was a clash of winners. Kids who had been consistently winning for years and outmatched anyone they encountered in terms of their intensity on the mat. And in the rare moments when they actually lost to someone, it was almost as if they didn’t understand the world of losing, for it never occurred to either of them while competing for even a second that they would lose. They were a couple of warriors… but very, very different warriors with different styles, different outlooks, different ways of preparing, different ways of approaching their matches against each other, different HS careers and different body types…but their intensity, passion for the sport and respect for each other was something they undoubtedly had in common… Before we get into some of their matches, let’s take a look at some of Mack and Justin’s general thoughts about their rivalry.

If you were to give a summary of you guys’s rivalry in a paragraph or two, how would you describe it?

Mack Reiter: Justin was an awesome competitor and a huge contrast in body shape and style from myself. I was short and squatty, he was long and lanky. Up until around 6th-7th grade he was almost always one weight above me every year at AAU so we didn’t wrestle until then, but we had some great battles from that point on. Honestly I don’t know if we wrestled more than 6-7 times total in our careers, but I think every single one of them was close. Typically we would only wrestle in state level events (AAU, Freestyle state, Freestyle State Duals, etc.). I would say the rivalry lasted from 6th grade until sophomore or junior year in HS. Once we got to high school it was limited to just freestyle.

Justin Swafford: Looking back I think it was a matter of two extremely competitive young wrestlers wanting to make their mark in the sport. We had a similar meanness and determination about us that clashed when we were on the mat, I can remember a lot of pacing and epic stare downs (lol!). As we became members of the same freestyle wrestling club, Future Hawkeye Wrestling Club, which became the Trojan wrestling club under Mark Reiland’s leadership with help from Pablo Ubasa, we got to know each other better as friends off the mat and realizing we had a lot in common. We both came from a family crazy about wrestling with sibling rivalries, not to mention the towns we grew up in are also a hot bed of wrestling culture and passion for the sport. The rivalry sure sharpened each of us which led to a lot of growth in the off season and success at Fargo. Mack was really solid all around. His positioning was hard to break through to score on, and of course he was a monster on top. I was always able to transfer any kind of nerves into excitement to wrestle my best match no matter who it was, to outwork my opponent. With Mack it was no different, except there is a level of respect there that I tried to utilize to sharpen my skills and senses, rather than overthink and freeze on the mat. The closest match was probably our 8th grade quarterfinals match. I did pull out a squeaker in Marion at the freestyle state duals wrestling for Monster USA (Tom Mashek’s club) which felt great. This was Junior or Senior year. I remember a really bad call in the middle of the match while in the par terre positon that I thought should have went my way but put me behind by 2, in the last remaining seconds of the match I forced him below me and quickly cut the corner to lock up a crotch lift from our feet and threw him for 3 to win the match by 1. I had really good hips there and worked a lot at club practice sitting in the chair and doing the move smoothly with explosiveness getting good air of my opponent (Pablo Ubasa and Tom Mashek were to thank for a lot of my freestyle techniques).

BEFORE WE DIVE INTO THE MATCH-BY-MATCH, YEAR-BY-YEAR RIVALRY THESE TWO HAD, LET’S LEARN ABOUT WHO THEY ARE FIRST. TO START, JUSTIN AND MACK’S BACKSTORIES! THIS IS COMING IN PART 2 WHICH WILL BE PUBLISHED SOON!!! I HAVE EVERY PART FINISHED ALREADY AND THERE ARE 5 OF THEM TOTAL!