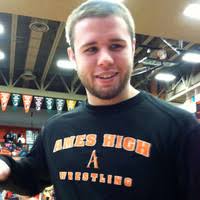 This is easily one of the favorite ones I’ve had the opportunity to do so far. I asked Josh Marker to do one of these because I have watched my brother Justin’s state finals match from 2002 at 2A 125 nearly 1000 times and I’ve always wondered, “where on Earth did this Josh Marker kid in the 3A class come from?” Because I hadn’t heard of him prior to that year at state… and you know me, I tend to follow these things closely.  Josh Marker, was the runner-up at a loaded 3A 126 in which big names like Gabe Rostermundt and Nick Beuter had to settle for battling it out in the consolation side of the bracket. And he made the finals again the next year as well. Obviously he was for real, I just had no idea where he came from. I didn’t know if he was a transfer from out of state or a late-bloomer or what. Turns out, he was the opposite of a late bloomer. This guy STARTED wrestling as a Freshman in HS and got good…QUICK and kept his foot on the accelerator to the point where he became a 2X finalist in HS. Getting that good, that quick is very rare and it inevitably sparks the question, “holy cow, how good would this kid have been if he had started as a young kid like most these guys?”

And he wasn’t pushed into the sport or even directed to it by any family or friends… You know how he discovered wrestling? The old fashioned way.  By just trying new sports out at school as a Freshman in HS. That’s how the old-timers discovered it to back in the days where we didn’t have parents steering the wrestling ships for their kids. It’s refreshing to know that guys are still discovering wrestling that way and that these guys are still seeing huge success as evidenced by Joshua’s accomplishments. And by even starting as late as he did.

This one is really cool for the overwhelming majority of guys you read about in these stories grew up in a family in which wrestling was a huge part of their lifestyle growing up. In Marker’s case, wrestling wasn’t known to him until he was introduced to it by himself, so he was able to go through the grind without the common perceptions and misperceptions that many wrestling families had and was able to make sense of the wrestling universe in his own way, where everyone is on an equal playing field no matter what your last name may be, for he didn’t grow up hearing any of the big last names anyways. Absolutely no biases or predeterminations with him.  And because of that, Josh Marker’s takes on his experience(s) in wrestling will be one of the most honest and unique takes you will read about in one of these. This guy is awesome.

I wrestled for Ames School System.

Just trying some sports out.

As soon as I joined, my dad informed me he was a wrestler.

I wrestled Gabe Rostermundt (Lewis Central) my Junior year before xmas break. He was 120-2 (or something crazy like that) at the time and he crushed me. But I only lost by 8. Just enough to save points the coach was thankful for. Fast forward to semifinals at state Junior year. Gabe was the shoe-in to be champ. He placed 2nd and first the years before. There were coaches visibly telling me “good luck on this one” to me. Idk what happened, but I was on point that day. I wrestled him, we went back and forth and I kept feeling like he was being drained every time I snapped on his head. So of course that’s what I kept hammering. Until I broke him. Once that happened it felt like I was wrestling a rag doll. I got my ball and chain (still patent pending lol) got back points and he physically gave up. He didn’t move and he was down by 4 or 5 points by the last little bit of time and he wasn’t fighting anymore.

Another adverse moment: When I first started wrestling as a freshman, there was a wrestler ahead of me even though I could beat him. Coach Bobby Thompson said i wasn’t ready for varsity yet. Thats why I wasn’t in. (Later found out his family was huge donors). Fast-forward to mid-season Dual, Ames vs. Valley. The varsity guy was some undefeated state champ or placer and he had pinned 3 or 4 Ames guys that he wrestled on our team. Coach said to me ” you think you’re varsity level, prove it!” He set me up as a freshman with the best guy in state and had me wrestle up a weight class. I did lose, but I didn’t get pinned or teched. I was the only one he couldn’t break. After that, he had me wrestle varsity.

The papers dubbed it the “marker funk.” I’d call it cardio endurance that would break people.

Along with Rostermundt, just one my sophomore year. I had a Valley wrestler who beat me, but I ended up beating him at state.

Bobby Thompson he let me learn my own style without pushing me to his style.

I worked out with Cael Sanderson and his brother Cyler for a summer and that was pretty cool.

Trent and Travis Paulson. Trent who I trained at my MMA gym later on.

Were you proud to be part of a program like Ames that has such rich tradition with last names like Gibbons, Greenlee, etc.?

Greenlee is back with his kid and Gibbons was my senior year coach he was pretty cool.

When did you notice yourself making huge strides and bumping up a level in your game?

When I wrestled freestyle freshman to sophomore year.

Senior year state finals. I felt like he stalled and no one called it. Now watching it later on I would agree with that even still lol.

I’m a former pro fighter and fitness instructor who learned that knowing other things and other arts will benefit the others. I wish I would have learned this earlier.

As a coach I find there isn’t a much grit now days. Kids are broken way easier. This is why the ones that are good are very good and the ones that are ok, don’t upset a bunch of people at big tournaments like they used to.

BVU and then MMA

I played football and baseball.

It felt good for 10 years, but got a bit taxing.

It’s literally what made my career happen.

I am a trainer.

Get some grit, endure more, enjoy it.

I was informed by my protégé Riley Banach (his dad is Ed Banach, former Olympian with gable) that I made it into the Gable Hy-Vee Hall Of Fame for having one of the fastest  pins at state. It was against Aron Scott, I believe. Riley was not gifted with talent but grit for days. Put in over 600 hrs. over 4 years and he went from 3rd string JV to a state placer.

Next post: WHO IS THE IOWA HS WRESTLING GOAT?!?! The Case For Trent Paulson, CB Lewis Central