Who Is The Iowa HS Wrestling GOAT?!? The Case For Jesse Sundell, Ogden 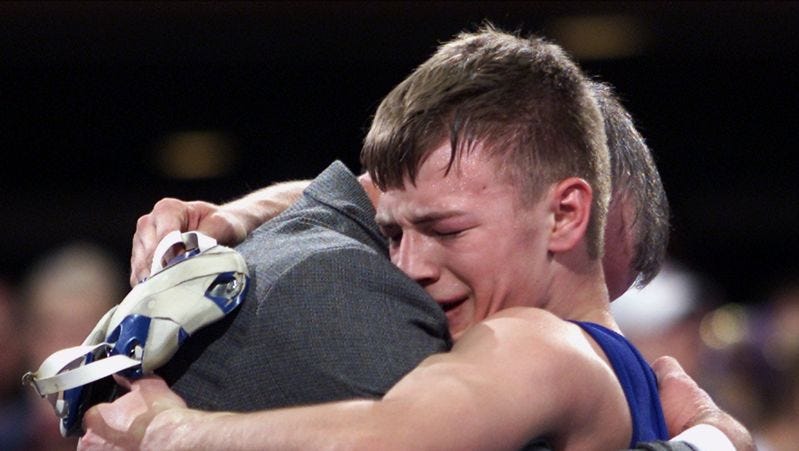 Jesse Sundell, Ogden, Class of ‘01. There hasn’t been anything quite like him to go through the Iowa HS wrestling scene. When Jesse stepped on the accelerator of his wrestling growth, he stepped hard and never let up. He did things that defied logic. In fact, to this day, one of the most astonishing things I’ve ever witnessed anyone accomplish on a wrestling mat was something he did at the state tournament his junior year. He won his third state title in dominating fashion in a bracket that included the likes of Galanakis and future state champs, Aaron Helmrich of North Linn and Dustin Hinschberger of Belle Plain. An impressive feat in itself, but unexplainable when considering the fact that he did this with a broken leg that he suffered in a bull riding accident… It should be mentioned that Jesse was an accomplished bull-rider off the mat. His brother, Wade Sundell (Ogden ‘03) continues to be a force in the bull-riding scene.

Entering the postseason of his Senior year, Jesse was in the process of putting together a high school wrestling career  that was flawless. With three weeks left to go in his entire high school career, not only had he won state the previous three years, but he had yet to lose a match. And nothing indicated that he was in jeopardy of not becoming an undefeated four time state champion, for he beat everyone he faced soundly. No one really seemed to come close to beating Sundell until Mario Galanakis defeated him in the Sectional finals Sundell’s Senior year, a result that was reversed a week later at districts. He remained unbeaten from there and had a come-from-behind fall in the finals vs. Chris Helgeson of Lake Mills to secure his 4th title. Take it from me, that bracket was one of the most loaded ones that we have seen at the Iowa HS State wrestling tournament.

Battle tested every…single…year. Every bracket had fellow elite guys/state champs in their own right:

Does Jesse have a case for being Iowa’s GOAT HS wrestler? Indeed, he did things that indicated incredible intangibles that he possessed in which hadn’t been shown by anyone else in history… winning state on a broken leg? 4 titles? Finishing career with one loss… So close to being flawless. Yes, he has a case. Makes me proud to be a part of the 2001 class myself.

Next post: Who Is The Iowa HS Wrestling GOAT?!? The Case For Cael Happel, Lisbon