Who Is The Iowa HS Wrestling GOAT?!? The Case For Brandon Sorensen, Denver-Tripoli 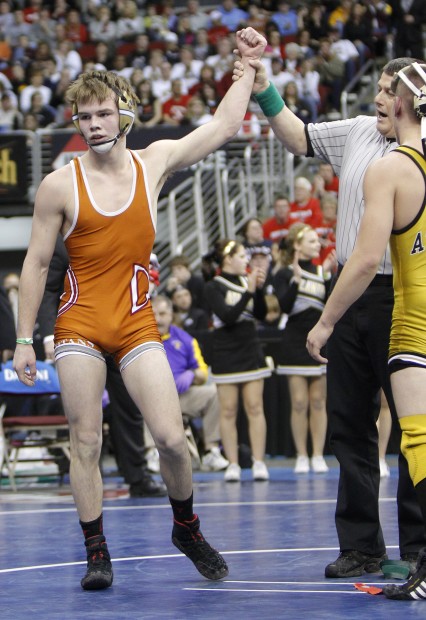 That Denver-Tripoli wrestling run of the late 2000’s/early 2010’s was one that I think will probably stick with a lot of people for years to come.  Coming from a guy who’s squad was in the team title race most every year around that time, it was kind of a bummer having to deal with those guys.  They were solid, up and down that lineup and if you can narrow down the top 5 guys from that team in that era, it is crazy that they all ended up on the same team at the same time the way they did for DT. There was something very intimidating about those guys. Not only in the fact that they were good, but it was in the way they were beating guys… Dylan Peters burying guys like he was a Wells Fargo undertaker, Brandon Sorensen offering absolutely no opportunity for his opponents to even breathe, the systematic destruction of Levi Wolfensperger and the quiet confidence they all seemed to step on and step off the mat with. When you watched one of their hammers beating up on one of our hammers, you got the feeling that their parents could do the same to our parents if we had any objection to the beatings handed out by the Denver-Tripoli wrestling squad around that time. So the vibe indicated that there should be no misunderstandings…to say the least. And their names were tough.  What sane person would ever WANT to wrestle someone with the last name, “Wolfensperger?” And to think that Oz, Gunnar and Levi all exceeded the lofty expectations laid down to them on account of their tough-sounding names. Crazy.   If that squad had a house, I am sure that they probably handed out beatdowns for Halloween opposed to candy. Or maybe caramel-covered onions. And if you were to pick one guy to be the “face” of that squad from that era, who would you choose?  Well, there was only one 4X state champion for Denver-Tripoli in that era and his name was Brandon Sorensen.

Brandon Sorensen… The most decorated wrestler to come from that rugged Denver-Tripoli squad of the late 2000’s-early 2010’s.  Such an honor in itself, let alone being in the discussion for GOAT Iowa HS wrestler.  I don’t remember there being a year where Brandon Sorensen was not the best in his age group/weight-range.  For real, on top of winning HS titles in 2010-2013, he also won AAU state every year.  Not very many kids have done that.  Even fewer won 6 AAU titles AND 4 HS titles.  Every year for 10 years straight, Brandon beat anything and everything that crossed paths with him… This carried over to college and post-college. I mean, the kid even beat cancer! Tough, tough kid.

With his consistency, he was one of the biggest “no-brainer” recruits to ever come from the state of Iowa.  He was for sure going to do something at the next level.

So other than the Denver-Tripoli coaching staff, who else contributed to producing these man-children that Denver-Tripoli produced around that time?  Most of them were products of the Cedar Valley Mat Club… One of the most interesting stories that has ever been posted on this site was called Remember The Wrestling Club: Cedar Valley Mat Club and it was made possible with the help of founders; Bill Thompson, Brett Wrage and Dwight and Duane Sorensen. You can read that article by clicking here.  Some of the names that came from that program include; Brock Sorensen, Blake Sorensen, Brandon Sorensen, Craig Sorensen, David Sorensen, Eric Thompson, Logan and Ryan Mulnix, Spike Welter, Garrett Smith, Levi, Ivan, Oz and Gunnar Wolfensperger,  Dylan Peters, Brennan Pruisner, Blake Pruisner, Chase and Izaak Shedenhelm, Anthony Hable, Cole Deike, John Simons, Sean Weber, Gary Urban, Terry Stover, Dylan Wrage, Bubba Hilmer,  Jordie Rinken, etc.

I am getting off track a bit here.  This article is about Brandon Sorensen.  It’s just difficult to not point out how instrumental the Sorensen family has been for the sport of wrestling in Iowa and it’s wild to think about the impact that they have all had on so many high-caliber wrestlers and individuals.  It is not surprising that a Sorensen has a very solid argument for consideration of Iowa HS wrestling’s GOAT.

He committed to the University Of Iowa and it should have come as a surprise to no one that he had success there.  He was a 4X AA for the Hawkeyes, placing 4, 2, 3, 5.

He was also battle-tested.  He had a fellow state champion in each of the 4 brackets that he won.

As a Freshman, he had 2 other state champions in his bracket: Logan Thomsen (Union) and Jacob Colon (Clear Lake)

As a Sophomore he had at least two other state champions in his bracket: Logan Thomsen (Union) and JC Vercande (Williamsburg).

As a Junior, he defeated 2X Illionois/1X Iowa state champion, Topher Carton (Assumption) in the finals which prevented Carton from securing his status as a 4X state champion.

As a Senior, he had Chase Straw (Indee) and Jacob Holschlag (Union) in his bracket. Holschlag actually won 2 titles.

Does Brandon Sorensen have a case for being the Iowa HS wrestling GOAT?!?  Damn straight, he does.