Who Is the GOAT Iowa HS Wrestler?!? The Case For Dan LeClere, North Linn 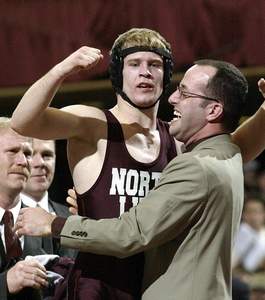 The Leclere family. That is one…tough…family. I am 4 years older than Daniel and was aware of him being really good back when he was in like 3rd or 4th grade. I actually got to know them a bit when I was a Junior/Senior in high school and Dan was a 7th/8th grader. We were in the same freestyle wrestling club, which was Mark Reiland’s “Future Hawkeye Wrestling Club.” Dan would come there with his dad. His dad was always willing to push himself and work harder on the mat than anyone else in the room. I would attend practice and a common thought I’d have would be, “why is this dad able to run more sprints than me without vomiting? Is this guy a warrior or is it because I am a dog?” The answer was both of those. Then after practice we would all hit the locker room and Dan and his dad were guys I seemed to chat with the most. After speaking with Dan every week, I’d think to myself, “I am a Senior in high school, why is it that this 8th grade kid is clearly more mature and level-headed than me? Is it because he is advanced or is it because I am a jackass?” The answer was both of those as well. So the LeClere father and son duo of Doug and Dan got me to both question my youth and question my maturity. With that said, I knew that Dan was going to be a stud. He could have competed at a high level in high school as a 7th grader. He was wise beyond his years off the mat and tenacious beyond his species on the mat. He was way ahead of everyone in his age group, it seemed.

Dan won 4 titles for North Linn and finished with a 167-2 record. He ran into all sorts of competition every year he wrestled at state. Check it out:

Does Daniel Leclere have a case for the Iowa HS Wrestling GOAT?!? Well, it’s kind of unfair to assume that there are too many of any knocks against him. IMO, his case began his freshman season. What he did that year was nothing short of amazing. To start, he was a freshman who won at 119. There is a significant difference between 119 lb. Freshmen and 103 lb Freshmen in which the overwhelming majority of 4Xers start off at 103. 119 is tougher for a Freshman. And that bracket had 2X runner up and Tulsa National Champ, Corey Kalina. His Sophomore championship was even more impressive for he beat 2X state champ, Charlie Ettelson from Hudson in the finals. Mitch Norton from Clarksville was also in that bracket. He won state two years later. Most notably was Justin Bohlke from Kingsley-Pierson placing 4th. He was the returning 2002 1A 125 lb. state champion.. the bracket that also included Ryan Morningstar from Lisbon, Chad Beatty from Wilton and Mario Galanakis from Nodaway-Valley.

Dan Leclere was legit. Don’t cross him off.

Previous post: Who Is The Iowa HS GOAT?!? The Case For Carter Happel, Lisbon