Who Is The Iowa HS GOAT?!? The Case For Carter Happel, Lisbon 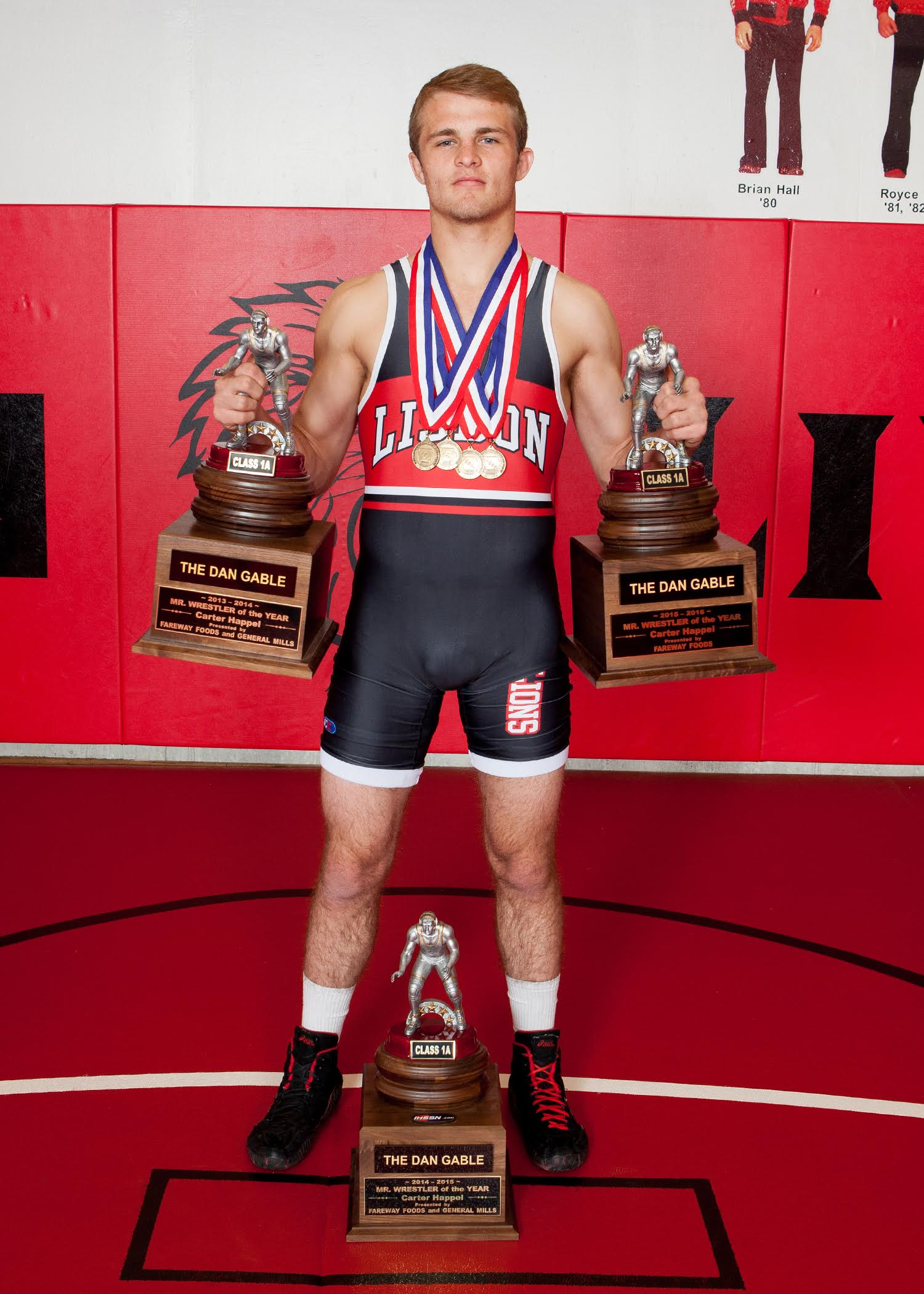 I witnessed pretty much every title that Carter Happel ever won.  Impressive, eh? Actually it is, considering I watched him from the time he won his first Super Pee-Wee state championship as a 1st grader and racked up about 6-7 of them BEFORE even entering high school. Carter was pretty much “the” guy of that solid 2016 class from the get-go.  I know this for a fact, he was in my brother, Shea’s grade and I had that grade broken down to a science for years. There are only a couple-few guys that I recall ever giving Carter any sort of “fit” from the time he started until he finished his epic high school wrestling career.  One was Hunter Washburn from Alburnett. It seemed like those two met 100 times from the time they were tykes all the way through high school.  They had a highly publicized quarterfinal match at state when Carter was a Sophomore going for 2 and Hunter was a Junior going for his 3rd. That was a high-pressure match…whoever won still had a shot for 4 titles while the loser’s quest ended there. And it just so happened to take place between a couple guys who were already bitter rivals for a decade leading to that match. Carter won that one. Carter won the majority of his match-ups against Hunter Washburn, but I want to say that Hunter won at least one time maybe multiple against Carter early on when nobody else seemed capable of making even the faintest smudge on his armor.  Another guy who gave him fits was a kid named Ryan McDaniel from Marshalltown… a kid who had a penchant for slowing matches down and being a mostly defensive wrestler/opportunistic scorer. He was frustrating to Carter. He was frustrating to every offensive wrestler. I tell you what, it grinds my gears a bit when talented wrestlers quit when they have obvious talent. McDaniel was a guy who did that. He didn’t go out in high school. He was one of the best in the grade who would have surely succeeded in HS and he wasn’t the only elite kid of that class to quit.  A kid named Austin Stogdill from Alburnett was one of the best in that grade as well and he didn’t wrestle much in high school.  He would have been great as well.  I don’t know what led them to make those decisions, but I always wish the best for people and I hope that the path they chose, which didn’t include wrestling, led them to happy lives now. Anyways… that was pretty much it, from what I can remember.  Maybe Matt Wempen? I know Wempen beat McDaniel in the finals at state when Carter and McDaniel were 7th graders… but nevertheless, no one really ever got in Carter’s way and if they did, the whole gym talked about it because it was rare.

When Carter hit high school, this trend continued. He finished with a career record of something like 209-1 and won 4 state championships. The only blemish he had was his Freshman season against a Wilton guy, I believe it was against Zeke Smith (and he would have wrestled up to face him). He defeated Smirh’ teammate, Brady Ruden in the state finals that year in an intense overtime match.  Ruden would go on to win a state championship of his own the following year. But that was it. Other than that, Carter was flawless in Iowa High School sanctioned events. And he was battle-tested every year… check out the results of the brackets he won:

Carter had two or more fellow state champs in his bracket every year, except his Sophomore year and that year he had 1. He was in a shark tank every year at state and every year, he was the Great White shark from Jaws. He was a national champion as a cadet at both FILA and Fargo nationals and placed 3rd and 5th at Fargo nationals as a Junior.

Does Carter Happel have a case for being considered Iowa high school wrestling’s GOAT?!? YOU ARE DAMN RIGHT HE DOES!!! And if you try to dispute that, you are wrong and need to clear your head to where you can give this guy the credit he deserves.

Next post: Who Is the GOAT Iowa HS Wrestler?!? The Case For Dan LeClere, North Linn

Previous post: Who Is The Iowa HS Wrestling GOAT?!? The Case For Jay Borschel, Linn-Mar