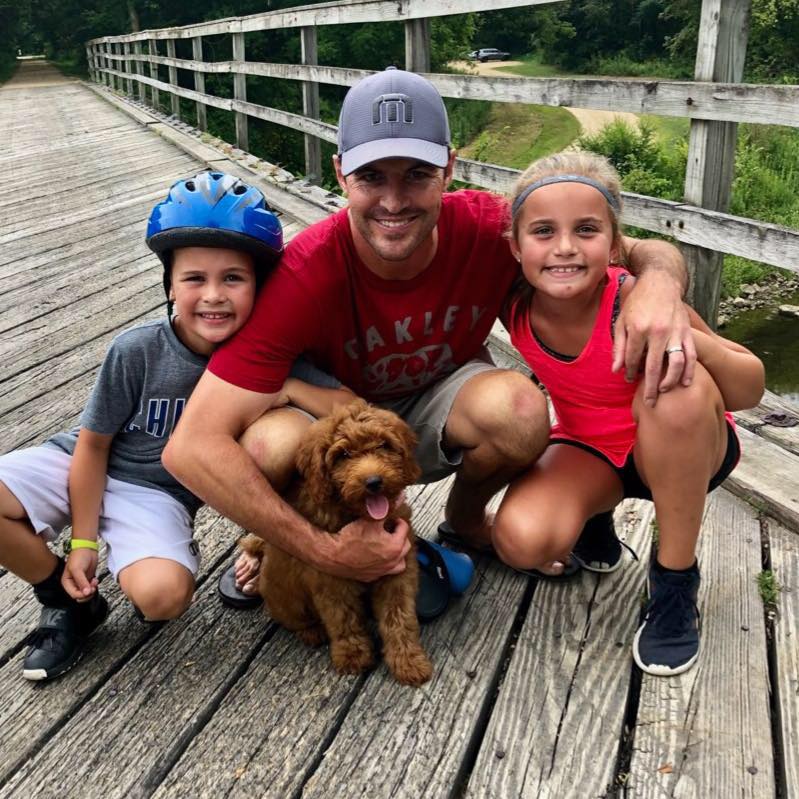 Matt Davis was in my grade. The class of 2001. He was also at the same weight as me…literally every single year since we began. I wrestled Matt a lot. Maybe more than I have wrestled anyone and until 9th grade or so, I think I won every matchup against him.  Listen, there are not many wrestlers, if any that I personally respect more than Matt Davis and there is a reason for that.  For one, he and his dad are nice. Secondly, I know firsthand, that this guy never, ever, ever stopped improving.  The improvements were gradual at times, but they never stopped.  Every year he was fine-tuning new, valuable skills and it used to impress the hell out of me.  By the time we were Seniors, he was one of the best technicians in our grade.  And I’m telling you, it was a snowball effect with him.  His improvements were direct results of having a good attitude, putting in the extra time, listening and working his tail off. He earned every stride he gained. By the time we hit high school, he was beating me more often than not when we would meet up at freestyle tournaments.  Every year he incorporated a new set of elements to his game.  That Dubuque Senior duo of Matt Davis and Nathan Specht, people need to remember them.  They were absolutely awesome wrestlers and people.

I went to college in Dubuque and worked at a pizza place called Falbos to help get me by through college.  One of my happiest days at work was when the Davis family came in and immediately recognized me and asked how I was doing.  Just the nicest people and I was so glad that they didn’t forget me because I sure as hell won’t ever forget them.

I wrestled for Dubuque Senior in high school. We didn’t really have any clubs in youth wrestling, but had good coaches and practices around Dubuque.

My dad encouraged me to give it a shot when I was in third grade, so I signed up for a program through the YMCA.

My dad wrestled in high school, and my son Owen is 6 and just getting started. He does a good job, works hard and has a great attitude.

I did well, but not great. I think I made it to AAU State 3 or 4 times, but never placed. A lot of names come to mind, I wrestled Brett Wheelen about 100 times, but we were always friends off the mat. There was also a kid from Mediapolis named Josh Swafford I could never get past.

Not a lot of adversity, I was lucky enough to stay pretty healthy.

I was aggressive on my feet, legger on top, and liked to work the granby from bottom.

I traded wins with Ryan Sallis from Waterloo East a lot my freshman and sophomore year.

Tim Hejhal had the biggest influence on my style, he was a great teacher and coach. Denny Moore (Nate and Nick’s dad) was my youth coach and had a huge impact as well.

Freshman and sophomore year we were competitive, junior and senior not so much. I always had great practice partners though.

Being a Dubuque Senior guy I looked up to Keith and Eric Weber and Rick Healey.

Probably an unanswerable question, but I remember seeing Eric Juergens at practices and tournaments when I was younger, and he was awesome. I think he would get my vote.

State my senior year. Your goal your whole wrestling career is to win a state title, tough to take when it’s over.

Nothing really, a few matches I would have liked to go differently, but that’s life.

Making it to the finals my junior year. I beat Jake Hobbs in the semis, who kept me from going to state when I was sophomore.

Describe the wars you and Specht had over the years… could you have asked for a better practice partner?

There were battles, but probably not what you would think. We wrestled each other everyday for years, so we knew what the other person was going to do. It became pretty boring. He has been my best friend since first grade and I think I can count on one hand the number of times we have gotten mad at each other. Great partner, better friend.

Do you have a lot of pride in Dubuque area wrestling?

Yes, growing up there weren’t a lot of kids that wrestled regularly, but the ones that did were very good. There are great coaches and programs in the area now. I live in the Western Dubuque school district and have a ton of respect for Coach Cleary, his staff, and Coach Gotto. They run a great program.

How much did freestyle help your folk style game?

It helped on my feet, which was probably my weakest position. By the time I was a senior it was my best. Freestyle teaches you to finish your shot or get the hell out of there. It was also the most fun I had wrestling.

Being from Dubuque, I had the pleasure of wrestling Cliff Moore and Ryan Heim on a regular basis. It helped me when I was younger, but created a lot of losses in high school. Tim Halligan and Johnny Galloway as well.

Seasonal when I was younger, all year in high school.

I think we would do fine.

No, I had enough. A lot of work for a lot of years, I was ready to be a regular college kid.

I played baseball when I was younger. In high school I ran cross country to help me get in shape for wrestling.

Spending time with my family and friends, golf.

I haven’t been involved for a long time, but recently started getting back into it with the youth program at Western Dubuque. It’s great to be around the sport again.

Dan Gable said “Once you’ve wrestled everything else in life is easy”. I think that sums it up pretty well.

Work hard, be coachable, and believe in yourself. Confidence is a powerful thing.

My practice partners Nate Specht, Coalton Olson, and Louie Fischer. I owe a lot to Louie, he was a couple years older than Nate and I and he would haul us around to lift and to practices even when we didn’t want to go.

Most of all my dad, he spent a lot of time taking me to practice and tournaments. He was always supportive, and found a good balance of helping me get better without pushing too hard.

A lot of good times, I hope he doesn’t get mad at me but one of my favorite stories is Louie Fischer’s battles with the hydraulic door. If he was having a bad day, he would storm out of the wrestling room and slam the door behind him as hard as he could. About halfway shut, the hydraulics would catch the door and it would close gently behind him. We always got a good laugh, I think Louie did also.

Next post: Who Is The Iowa HS Wrestling GOAT?!?! The Case For Jeff McGinness, IC High