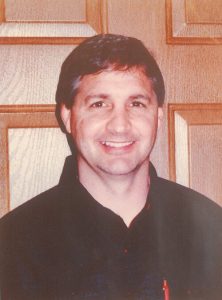 In 1979, Jeff Kerber became the state of Iowa’s second four-time state champion. A drought that lasted 17 long years from the time that Bob Steenlage of Britt, became the first to accomplish that feat back in 1962. Kerber’s mid to late 70’s performances elevated the threshold for both greatness and perfection.  During his high school prep career, Kerber went a spectacular 126-0 between 1976-79 to become just the second multiple-state titled wrestler on record to finish a career without a loss. Got a clue as to who the first was?  Ah, yeah – Dan Gable (finished his prep career undefeated but won only 3 state titles).

At the pivitol moment in Kerber’s young wrestling journey, it just so happened that Dan Gable, was coming off his 1972 Olympic gold medal victory, and was the role model that Jeff Kerber had in mind when he began his assault on the Iowa state record books, becoming the first “undefeated” four time state champion in Iowa history in 1979… Gable provided a new model, one of inspiration that focused on dominance and perfection. It was his model of “doing BIG things” on the wrestling mat in regards to setting his goals, and ultimately becoming one of the young studs that helped Emmetsburg capture four straight class 2A team titles at the same time he was showing the rest of the Iowa wrestling world what the new standard looks like.

The sport of wrestling was beginning an evolution in the early 1970’s that would pave the way for Iowa wrestling nationally in the future, building on and using youth programs to advance the sport. Kerber would ultimately create a new “road map” for how to prepare one’s self to be a valid contender for winning a state title right out of the gate, ready to compete as a 9th grader against all comers.

The road map revolutionized Iowa wrestling and was the product of a father’s unselfish and unwavering dedication to helping his son (and anyone who wanted to come along for the ride when car space was available) advance and improve. It really was a road map, as it was a plan based on lots of travel… with the goal of gaining competition experience wrestling nationally and throughout Iowa from 3rd grade through 8th, and going to lots of camps with excellent coaches and instructors. Then bringing that knowledge back home and introducing those advanced techniques to the Emmetsburg wrestling team. It was Jeff’s dad, John and Bill Gibbons who rented a gym and held a state AAU tournament so that wrestlers from Iowa could qualify for the national tournament. And as a result, Jeff Kerber was miles ahead of his fellow freshman when the 1975-76 wrestling season began.

Raising the bar in Iowa high school wrestling is what the GOAT discussion is all about, and Jeff Kerber is THE candidate that opened the floodgates for the next round of 4-Timer’s to push through.

Over the next decade, Iowa wrestling would see five more 4-Timer’s get crowned following in the wake of Kerber’s footsteps and opening the door to their own claims as Iowa wrestling’s GOAT.

Jeff Kerber won his 1st state title in the 2A 98lbs weight class with a (1-0) decision over Jeff Hannum of Pleasant Valley in the 1976 state tournament and finishing with an unblemished record of 31-0.

In 1977, Kerber moved up 2 weight classes to the 2A 112lbs class and locked horns in the finals with 1976’s returning state champ at 105lbs – Tracy Moore of Roland Story and became a feature match of 2 state champions, both with aspirations of becoming future 4-timers. Kerber came out victorious beating Moore by a score of 6-2. This solidified Kerber’s standing as a legit contender for a 4-title crown earner. From this point on, you could bet ALL eyes would be on the young man from Emmetsburg and their program as they dominated the class for the 2A team title. Kerber again finished the year with an undefeated 31-0 record.

The next season (1978) would turn into a doozy as Kerber locked down his 3rd straight state title at 119lbs, advancing through the rounds and capping his junior season off with an 11-3 victory over Bill Pfantz of West Marshall, finishing his season with a perfect 32-0 record.

In his 1979 senior season campaign, Kerber left nothing to chance and pounded his way to that pinnacle moment by pinning his field of opponents and achieving what no one else had done in 17 years. In the finals of the 2A 126lbs weight class Jeff pinned his opponent Todd Fey of Central (Dewitt) in 5:18 and brought the full capacity crowd to their feet in a long standing ovation that celebrated his tremendous achievement with him, and his team, and of course his coach – Bob Roethler, who the E-Hawks lost for most of the 1978-79 season because of an aneurysm and just made it back via wheel chair to inspire and spur on his team! Kerber capped his final season with another perfect 32-0 record and his HS career, ending with a phenomenal 126-0 record.

During his HS career he also was a 3-time national high school champion and wrestled for the Junior World team in Mongolia in 1979.

Having watched 2 of his state titles and performances in 1977 and 1978 personally, I can attest to his tenaciousness and his technique… he was one of those wrestlers that you made time for watching his matches. I didn’t watch many lower weight kids back then, mainly because of their youth and seeming inexperience. But Jeff Kerber was different!  He wasn’t just a phenom that first year… he was impressive in a manner of wrestling maturity that separated him from the rest of the field at his weight, and you literally stopped what you were doing to watch him go about his business on the mat – and brother, “business was a booming” when it came to the talent he displayed throughout his high school career!

Jeff Kerber was the Iowa HS Wrestling GOAT of the decade in the 1970’s… there should be little to dispute that. Whether he is the all-time GOAT???  His case can be made by what he accomplished, and he definitely raised the bar for how “ELITE” level competition in Iowa is defined. Kerber was the second IA high school wrestler to join that elite group called 4x-State Champions, and the very first to accomplish that feat going undefeated!

He became the model and the “trailblazer” of his time, and an example that others used to follow in his footsteps and the new standard to measure greatness at that level, and was honored as such with his 2007 induction to the Iowa Wrestling Hall of Fame.

Previous post: Who Is The GOAT Iowa HS Wrestler?!?! The Case For T.J. Sebolt, Centerville