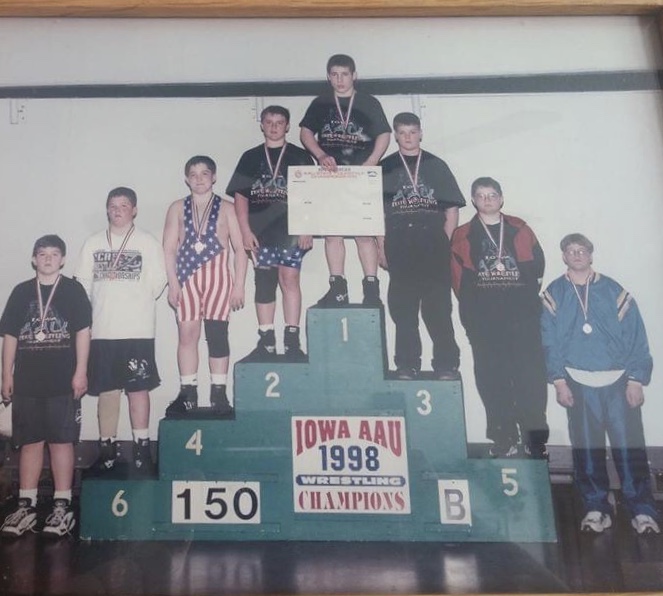 1st Place was Gabe Venz of North Central. Very nice, polite kid. Dad & I ran into him during the tournament before the finals. Called my Dad sir & kept on letting us know that he thought I was a very worthy opponent. Took him down in the first period, stuck me in the second. I believe he never wrestled again after this season.

2nd Place was Michael Bucklin of Colfax Mingo, one of my best friends in wrestling over a four year period. He had taken second in 1996 at the AAU’s as well. He beat me for the district title that year I believe in sudden victory. In high school he wrestled at 215 lbs & placed fifth twice in his sophomore & junior seasons before capping off his career with a state title as a senior. Wrestled a season or two at Iowa & then transferred to Wartburg for his remaining eligibility.

3rd place was Todd Parrish of Lenox. Very methodical wrestler. Did a great job of studying and scouting his opponents. I twisted my knee & it shut down my offense as he defeated me 7-2. In high school he won a state title his junior season & then took third place as a senior.

4th place me – Stephen Stonebraker… Had a great tournament with some notable wins. Two years later broke my back & missed nearly all of my eighth grade season. Had to have a major 24 hour surgery operation & wasn’t cleared to do anything at all (wrestle, lift, run, ect) until 3 weeks into the wrestling season my freshman year. Never was the same after. Weighed more here in this picture than I did as a senior in high school.

5th place was Kevin Trullinger of Mount Ayr. Great kid & very talkative. During the award ceremony when we were seated on the chairs waiting for our turn on the stand, he went up and shook everyone’s hand. Later that night Dad & I ran into him at a buffet. I think it may have been Bonanza. He saw me getting some salad & came up to me and said, “No, no, no no…dude the season is OVER, we’re piggin out!” Kevin was 7th-3rd his last two years of high school

6th place was Bob Swift of West Delaware. I believe Bob may have wrestled for a few more years after this, but Bob’s real passion was football. He was a standout football player in high school & went on to success at Northern Iowa. I believe he played some semi-pro ball for a few years post college & I had heard by never confirmed that he even had a year or two in the Canadian Football League.

7th Place was Tade Kracklio of Wilton – I have a funny story about Kracklio. I had wrestled him first round & beat him. A group of people (kids & adults) from Wilton didn’t realize that Kracklio and I had already wrestled. He had been the AAU champion from the year before & they found me & began to harass me, trying to psyche me out. “Tade’s gonna whip you dude.” “You’ll be lucky if you don’t get pinned.” “You won’t last the first period with him.” I just sorta stood there until a guy came up with new brackets to post to the walls. There it showed that I had advanced over him. Those Wilton people disappeared faster than Speedy Gonzalez! The next season I believe Kracklio won another AAU title or placed pretty high. He had gained a tremendous amount of weight. I want to say that he wrestled the next season at like 205. I never heard of him wrestling in high school.

8th place was Marcus “Buddy” Lewis and I don’t remember where he was from. He was appropriately named “Buddy.” Probably the friendliest kid I’ve ever known in wrestling during my life. The year before he pinned me/eliminated me from the bracket & afterwards helped me up & started talking my ear off. This year, I pinned him, helped him up off the mat, and he talked my ear off. I remember on the award stand he was talking to Bob Swift & the camera man yelled at him to be quiet and pay attention. That’s why he has that look on his face & I have that trying to laugh look on my face.

Previous post: How Close Were The 3 Timers To Winning 4? Part 3