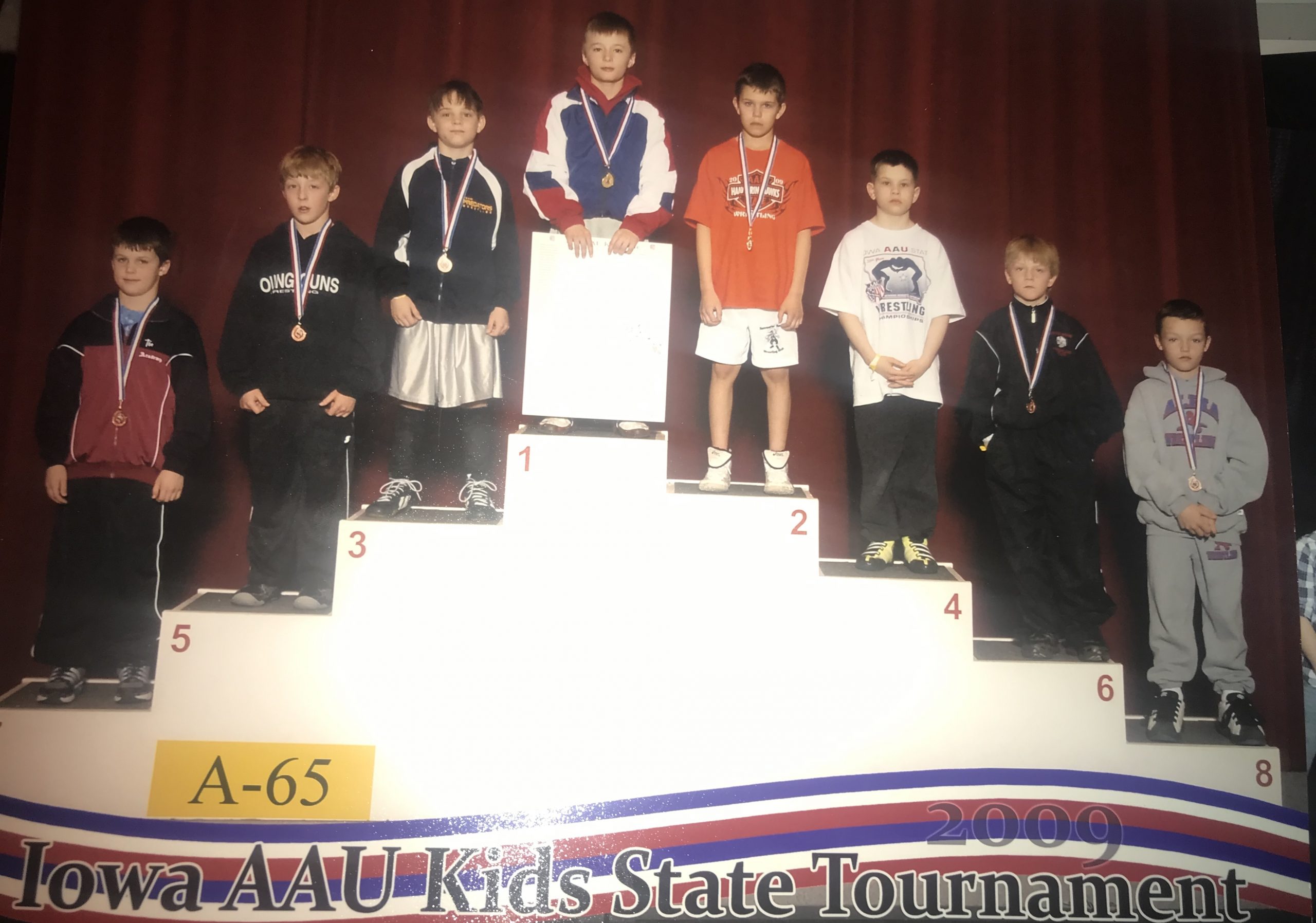 * All of these guys except Tedrow qualified for state in HS.

* All of these guys except Tedrow and Oldham placed at state in HS.

* 3 of these guys won state in HS: Stotts, Lara and Geerts. Geerts and Lara battled all the way until their Senior years in HS. That was fun. They are also teammates at UNI.

* At the college level, there is a national champ. Brennan Swafford won NAIA Nationals for Graceland University.

* This was Brennan’s first year trying out the “big” AAU tournament. He had done Super Pee-Wee the previous 3 years and placed 4th, 2nd and 1st there, buy this was a bigger stage than that. He was defeated by Triston Lara in the semifinals, 4-0 on a match that Lara controlled. Ironically, he had wrestled Triston’s brother, Cayd in the SPW finals the previous two years, in which they split wins. Brennan got a kick out of Triston at that tournament. Triston was very chatty with him when they were warming up for their semis match and Brennan was thrown off by it at first, but thought he was a funny guy. He actually had a good T-Lara impression back then. Not making fun of him or anything, just a good impression. He liked him. They met in the semis in basically every odd year for Brennan (even for T-Lara at AAU state). That kid was a handful for us.

* This tournament was the start of Triston Lara becoming Brayden Curry’s Achilles’s Heel. Every year, people would predict Curry to win the tournament and he would win it…. unless he had to wrestle Triston. Triston just had Brayden’s number. And it was weird, Triston would either best Brayden badly, or Brayden would be up big with 30 seconds left and T-Lara would always end up throwing him and pinning him. The only kid who could really beat Curry consistently in those days. It still shocks me that Curry never won state.

* Justin Tedrow has the tournament of his life here. He didn’t stick it out much longer after that year, but he and his little brother Jacob were very good. Nathan Feldman was expected to blaze through Tedrow in the semis and Tedrow beat Feldman with a nasty cradle. It’s too bad he didn’t stick it out.

* My brothers Shea and Brennan wrestled the Feldman’s (Nathan, Jackson and Cody) more than they wrestled anyone.  They went back and forth every year like 6 times per year. Nathan was good enough to win state every year, but something catastrophic always seemed to happen to him in the semis.

* This was the first time we encountered Keaton Geerts and it wasn’t the last. Keaton and Brennan wrestled for 5th and 6th at state in HS and seemed like they met up every other year at AAU. They went back and forth and it was always heated. The Geerts corner could get pretty worked up with adrenaline while Keaton was wrestling and so could I. I almost got into a fight with his corner that year for we were both getting overly lippy with each other when the boys were wrestling. I broke the ice and apologized after the tournament was over and we were ok ever since. I think they are really funny. Something that cracked me up was that whenever they were talking about Triston Lara, they would refer to him as “that Asian kid.” It’s just funny how he perceived young Triston.

* At that time and at that weight range, the 3rd graders who were the most hyped were Stotts and Brennan and every year people talked about whether they would meet up or not. They only did twice ever. The first time was at this tournament in which Brennan won. Stotts defeated Brennan at AAU a year or two later and that was the last time they wrestled despite still weighing the same to this day.

* Zach Oldham was a pretty big deal too. He was always one of the best in his grade. He did not accomplish what he was capable of in high school, IMO. I don’t know why, but I just know the kid real well and I know he had the skill set in there to take home a ton of hardware at the high school level. I’d love to see him make a comeback, for I know he can excel at the college level. He had been wrestling since he was 4 and maybe he just needed a couple years off.

Next post: How Close Were The 3 Timers To Winning 4? Part 3