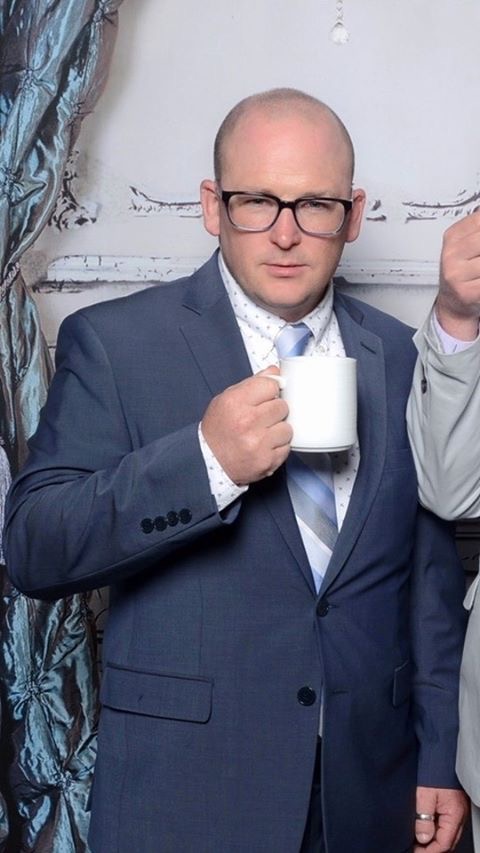 By Stephen Stonebraker
I was about three rehearsals into 12 ANGRY MEN for Iowa City Community Theatre as the short tempered, chip on his shoulder juror #5.  The production was being directed by Kehry Anson Lane, with the assistance of Michael Kammerer as his unofficial Co-director.  I really enjoyed Mike a lot as he was keen to detail & had excellent suggestions to enhance a scene.  While Kehry was able to see the product as a whole, it was Mike who helped to fine tune the production.

Over the years I’ve come to accept that while there are exceptions, athletics and the arts are usually on two different ends of the spectrum.  I’m used to being the anomaly in both worlds. The actor who wrestled or the wrestler who acts.  While a fellow actor in the cast ran track in high school, & some of the rest of the cast at least appreciated Hawkeye Football for what it was, I never dreamed in a million years that anyone else had a wrestling background.

That’s when Mike came up to me and shocked me with a question.

“Hey Stephen, did you wrestle in high school?”

I told him that I did and much to my surprise he responded that he did too.   Said he wrestled for Pleasant Valley.

Being the history, research buff that I am, I went home and immediately researched Mike Kammerer.   When I had said to him earlier that day, “Yeah, but I wasn’t very good at it.” I meant it.   When he said back to me, “Yeah, I was ok.”  It was obvious to me that he was being very modest.

My assistant director Mike Kammerer was very good in high school.  A three time State qualifier at the 3A level.

It was then I began to realize why it was that I took to Mike as well as I did.  Why I responded to his direction as well as I did.  We were both former wrestlers & whether we realized it or not, there’s a language wrestlers speak that is best understood among themselves.  Maybe it didn’t work with the other actors as well as it did with me, but Mike’s way of treating the stage as a wrestling coach treated a practice room worked well for me.

Mike is one of the most humble, modest people I’ve ever met in my life. Unless you asked him about it, you’d never know all of the many medals at various tournaments he earned during his career.  He racked up many victories during his time at Pleasant Valley, but he’d never brag about all the times he had his hand raised after a match.  Matter of fact when this article comes out, I can almost guarantee some of his friends will read it & respond in complete flabbergast…..

1.) How did you get involved in wrestling?  What age were you when you started?
I believe I was around 4 years old when I started wrestling with the Clinton, IA club.  Both of my older brothers wrestled and my dad was our coach.  He and his brothers wrestled growing up in Camanche, IA.  So I was born into a wrestling family.  We went to tournaments every weekend during the season and traveled around the country competing in folkstyle, freestyle, and Greco-Roman.
2. Your older brother Cory was a very good wrestler taking sixth place honors at the 1992 Iowa High School State championships.  What was it like trying to live up to an older successful brother?
Both of my older brothers were good wrestlers and I looked up to them very much.  As kids, it seemed like they were always winning and I was always losing.  But something changed for me around 6th grade and things just started to click.  From then on, I mostly won.  I watched what worked for them and tried to copy.  Cory was really good at snap-downs and I saw how well they worked for him, plus I was never very good at taking shots, so I started doing them too.  I was stronger than most of the kids I wrestled so it worked out.  But it got me into trouble when I wrestled someone with upper body strength.  Jamie had a sweet ankle-pick, but I just couldn’t get that to work for me.
3. You qualified for State in 1995, 1996 & 1997 in some rather stacked district tournaments.  What was it like earning trips to state each of those seasons?
It was pretty great.  I expected myself to qualify those years and maybe even place.  I cut a lot of weight for wrestling partly to make sure I would get to State.  I wish I would have been able to get over my nerves at State.  I think I could have placed, but my nerves just got the best of me.  I was never quite myself at State.  That’s where having a tough mental game is key, and I let the pressure get to me.
4. During your senior season you were ranked as high as fifth.  Did rankings ever mean anything to you?  Did they motivate you or affect your performance?
Being ranked was a bit of a double edged sword for me.  It provided validation that I was good enough and let me know that my coaches had confidence in me (I know coaches have to fight for rankings).  But it also added pressure.  I tend to perform better when I know I’m the underdog.  So being ranked put a target on me for sure.
5. Pleasant Valley was rather good as a team during your time in high school. What did it mean to you to be on a team that challenged at the conference, district & state levels?

6. Your senior year you won the Joshua Fullner Memorial Scholarship. What does that award mean to you?
Josh Fullner was a wrestler at my high school who unfortunately passed away one week after graduation in 1989.  A scholarship was set up in his name and given to a PV senior each year.  I really wanted to win that scholarship and was pretty excited and frankly honored to have been chosen.  I’d like to send a big thanks to his family for setting up the fund to help students with the cost of college.
7. You helped direct Iowa City Community Theatre’s 12 ANGRY MEN back in 2011.  Although worlds apart do you see any similarities between wrestling & theatre?  Did you use any strategies or techniques from your wrestling coaches in helping to direct the cast?
What’s great about wrestling is that it has both the individual and team component.  Wrestling teaches you how to be part of a team.  I never felt like my match was just about me.  I didn’t want to let me team and coaches down.  I’m not near as proficient in the world of theatre, but there are similar elements.  As an actor, you are responsible for your individual performance, and that is just one contribution of the entire production.  Directing theatre is sort of like coaching.  You have to guide the actors/wrestlers to perform their best under pressure.  And don’t forget to have fun while doing it.
8. How do you feel the sport of wrestling helped to shape your life? How has wrestling helped to make Mike Kammerer into the person he is today?
Wrestling taught me never to give up.  It is a very hard sport and demands a lot physically and mentally.  It teaches you what you are capable of.  For me, the mental aspect of wrestling was always the toughest.  You have to be able to control your emotions and fight through stressful situations.  Those are skills I will take with me throughout my life.