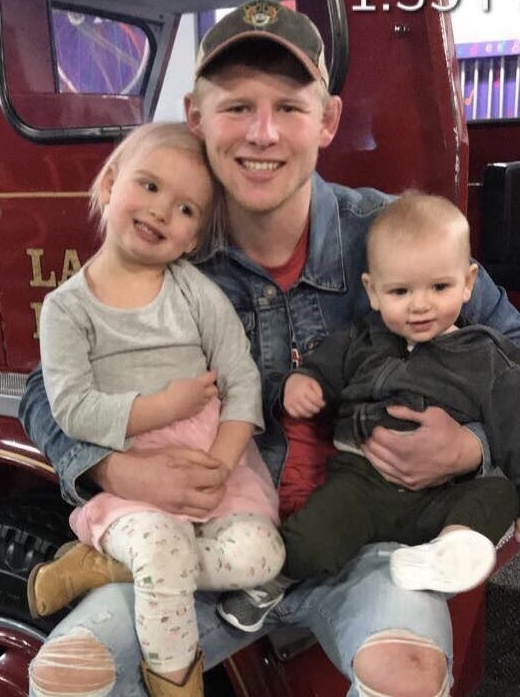 Here is what I posted about Dakota last week in a podium pic article (kinda silly, I admit): Dakota’s an SE guy from a HS program that I love, Fort Madison, and I’ve known his family for years and they are great. Two of his first cousins are a couple of my long time best friends, so they’ve filled me in for a long time about how he was doing. Dakota was an AA at Luther College. Placer at state for Fort Madison. It didn’t surprise me a bit to see this kid have success. And get this… There are a lot of wrestlers linking up with girls who are from prominent wrestling families themselves in SEI. I’m sure people remember Stewart and Steven Holloway? Both state champs. Both awesome. Well, Dakota and their sister, Harlie are now married with children. Not that wrestling breeding is an actual thing, but if it were, I’d say that their children will have good wrestling “pedigree.” Haha, there seems to be a lot of wrestling pedigree in the works with a lot of SEI kids. Gray-Holloway, Drain (Aaron)- Holloway (Heather), Swafford (Brennan)-Mashek (Maddie) are very serious lovebirds, Happel-Durr (that’s right, Lisbon! Mepo still wants credit for the Durr-half of these Happel monsters! 🙂 ), Krieger (Jorgi)-Zippe (Taylor), hell I married a McNeil… etc. A son and a daughter so far, I believe is what Dakota and Harlie have. There are 4 Holloway sisters; Holly, Heather, Honna and Harlie (Dakota’s wife) and I’ve told Holly this before, but I’m 90% sure all 4 would have been good at wrestling if the girls wrestling scene would have been as prominent in their days…tons of athleticism. Look for the name, “Gray” in the future…they have like a 99.9999% chance of being awesome…on and off the mat.

OK…OK… Maybe it was a little too much going into the wrestling couple’s stuff, but it is pretty funny/interesting.  And the evidence does suggest that if two people from wrestling families link up, their children will be good at wrestling.  Haha, not to put pressure on their kids or anything. I am sure Dakota is a top-notch dad.  His family is so diverse with their talents.  Good wrestling, good at showing horses and what not, good at organizing and facilitating events, etc. Hell, public speaking is another… I’ve never seen a public speech more perfectly executed than the one his mom gave at a wedding reception a few years ago.  They are one of these families that a program just loves to have, for they make tons of sacrifices just to ensure the program is maintained and efficiently so.  They are always spending their free time to volunteer to improve the programs and clubs that they are part of and I am sure Fort Madison just loves them for it.

When I was in kindergarten, I brought a wrestling flier home. My parents asked me if I wanted to wrestle, and I said yes. Wrestling has been a big part of my life ever since!

My brother Lane wrestled. He placed 7th at State his senior year. He went on to wrestle at Iowa western. I also have a great uncle who wrestled. Ron Gray was a 2-time national champ for Iowa State in 1958 and 1959. He also won three state titles for Eagle Grove.

I placed three times at AAU state. 6th in fourth grade, 6th in sixth grade, and 4th in 8th grade. In my 8th grade bracket my only loss in the tournament was to Cory Clark. Cory Clark beat me on the front side, and then lost to Thomas Gilman, so I had Cory Clark again for the third and fourth place match.

I placed twice at the state tournament. I placed 8th as a junior, and 4th as a senior. I had 113 career wins.

Losing my grandma my freshman year of college during wrestling season, and then losing my grandpa my senior year of wrestling right before the NCAA reginal were both very hard experiences. They both supported me so much with wrestling, so it drove me to do the best I could for them.

I had a quick pace. I liked to wrestle in and out, and preferred wrestling on my feet. I had a really good carry, and a double leg that worked well together.

I would say one of my biggest rivals of all time would be Chase Helenthal of Keokuk, Iowa. We were rivals since kids club, and went back and forth quite a few times.

I was blessed to have so many great coaches throughout my wrestling career. It’s hard to pick just one. Coach Smith and Coach Doherty are at the top of the list. They helped make me into the wrestler/person I am today.

We won three conference titles during my high school career. My senior year at Luther we finished third in the country at the NCAAs.

Russell Weakley. I used to cut out every newspaper article of him when I was in middle school and put it in this wrestling scrap book I made.

A few that stand out are Lunatic Fringe, Welcome to the Jungle, and Lose yourself

What was the most upset you ever felt after a loss? If you could go back and change one thing about your wrestling career, what would it be?

Probably the most upset I had ever felt was losing to Chase Helenthal at our home dual vs Keokuk. He was ranked 5th and I was ranked 4th at the time I believe.

In high school John Meeks and Connor Ryan. In college Kenny Martin from Wartburg. He was a two time national champ. I went 1-2 against him in my career.

I wrestled all year. As soon as the season ended, I would start practicing freestyle.

The guys from my day would dominate 😉

I wrestled at Luther College after high school.

How proud are you of Fort Madison Wrestling?

I am so proud of Fort Madison Wrestling. It is a great program with amazing coaches, and a great support system.

How happy were you to see your brother Lane place at state?

Seeing Lane place at state was my best memory of the high-school state tournament.

My top 3 are hunting, fishing, and golfing.

I love giving back to the sport of wrestling through coaching. It is a great feeling

Wrestling has taught me so many valuable skills. One skill that stands out is mental toughness. I have that mentality, that I can do anything I set my mind to.

I coach junior high wrestling at the school I teach at, and I coach Outlaw Wrestling Club out of Decorah, Iowa.

Come to practice every day with a positive attitude and set your goals high!

Maybe. I have wrestled at Corn Cob Nationals a couple of times, and I wrestle at the Luther Alumni meet every year.

Next post: 3A Podium Pics for the 2020 State Tournament