Blake Edwards was fun to have around. Even if he was popping you in the nose when the match ended and calling you a mouth-breather, he still made things entertaining. That dude was a tough, raw nerve who hated to lose and was not afraid to elbow you in the mouth if you ended up with his win. I used to watch him and think, “haha this is funny.” Usually he met up with my practice partner Adam Roberts. He would get chippy with Adam, but not too bad. Then I ran into him at AAU State as a 7th grader. I wore the world’s weirdest singlet to that tourney. It was a leopard singlet that was wayyyyy low-cut. I wore tights with it because I liked being one of those masculine tight wearing guys that made it easier for people’s hands to slip when they took shots. I beat him like 4-0 in that match. I was happy with that because he was good… however, at the end of the match he elbowed me hard in the mouth and gave me a bloody mouth. I’m guessing he figured that I was used to being pimp-slapped like that, given the way I was dressed.  I mean, this thing was dorky: 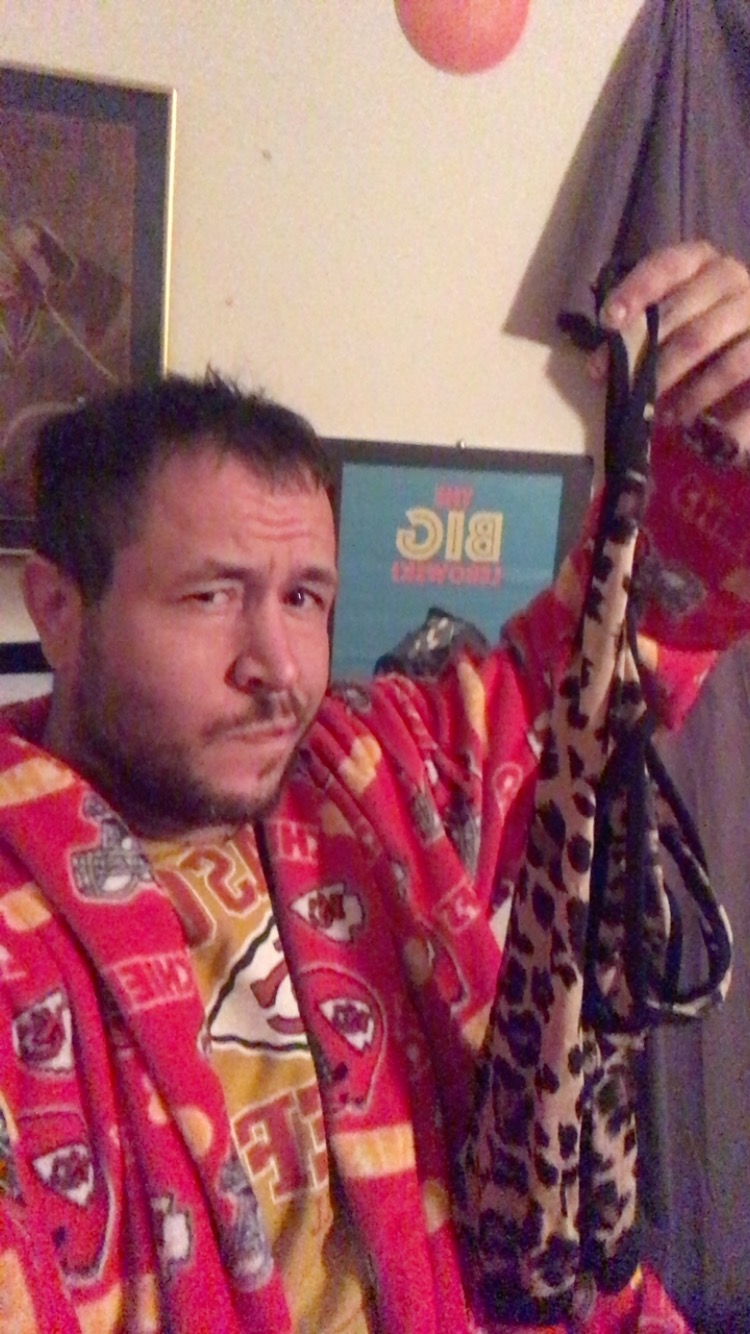 No! These are NOT my undies!!!

Have you ever seen anything like it?! I haven’t. I didn’t realize it was a low-cut until it arrived. It was $6 in a wrestling magazine..

Eventually, that singlet became an ongoing joke. Sometimes in high school we would walk around Wal-Mart or somewhere wearing only that and it would confuse people. We were pretty wild. Not as wild as Blake, though. He popped me in the mouth and started walking away without shaking my hand before the red caught him.

A ton of Mepo kids wore it in the finals at AAU finals, one year or another… I think. Adam Drain, Shea Swaff , Cole Erickson, Steve Holloway… I think they all wore it at some point. They are lucky Blake Edwards wasn’t around… ya see, Blake is a huge PETA member who goes into a rage whenever he sees leopard print because of all the poor leopards that get slaughtered out there to make that print. That’s why he couldn’t help himself from punching my stupid face every time he saw it! 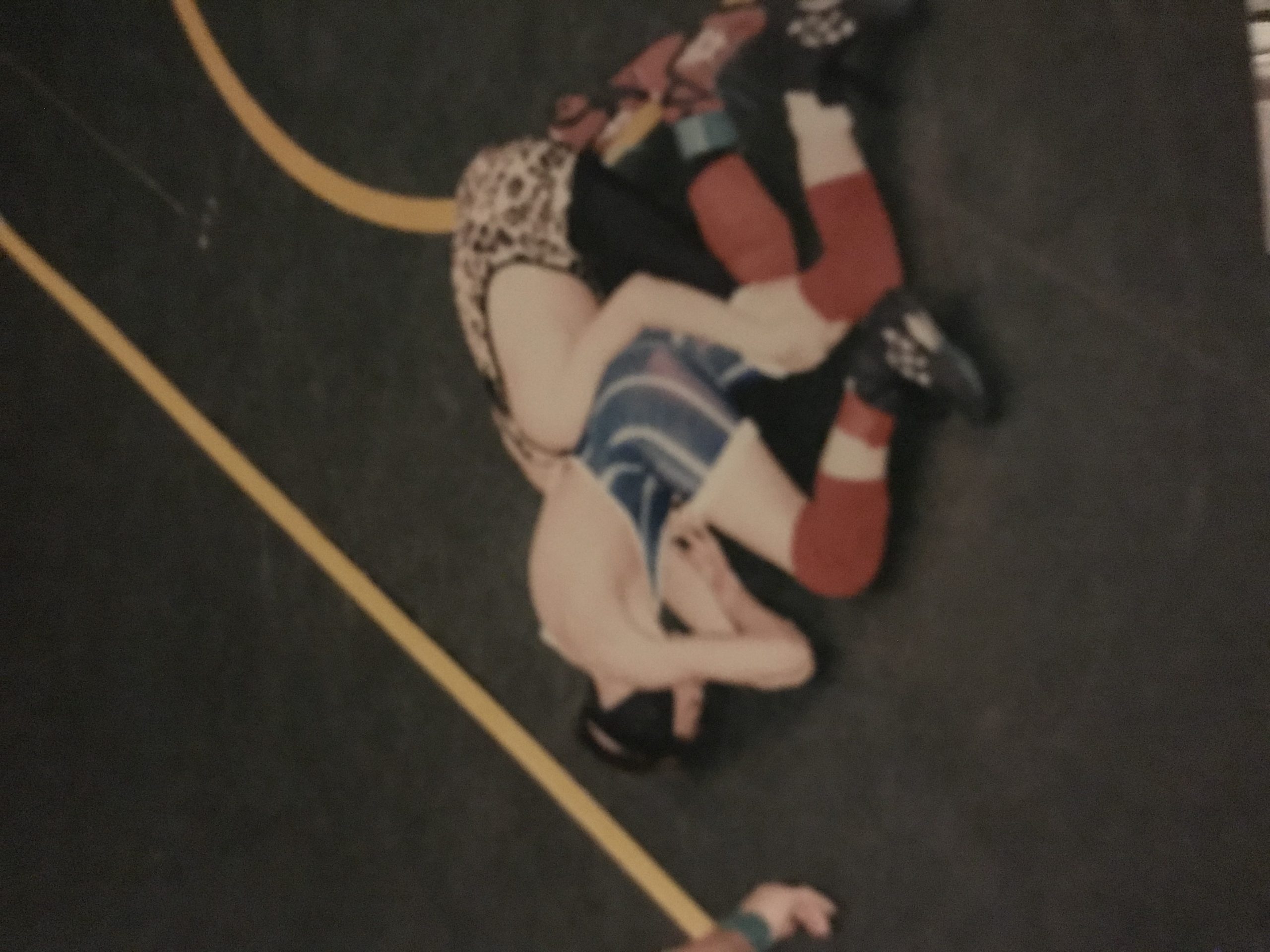 10 seconds after this pic was taken, Blake popped me in the mouth, which forced the referee to give him a spankin in front of EVERYONE! Boy was he mad! And holy cow, that’s some bad wrestling… we look like roadkill. Like someone ran over a leopard on the highway!

Ha… just joking. He hated the leopard singlet because he thought it made me look like a quote, “pussy.”  That’s what he called me when he hit me both times we wrestled. I was so offended… how could anyone get THAT impression of me with such a manly singlet.   So the first time he did this, I just kinda put my arms out and was all like, “what?! What?!” I was so totally West side back then. People knew not to mess with the man in the tiny women’s lingerie suit.

And then a few weeks later I went to a freestyle tourney and same thing. I beat him by a couple points and he hit me hard in the nose after the match and called me a pussy again right when the match ended. This time I decided to get super street with him and I pushed him. Then he pushed me back and we had to be separated.  It probably appeared ridiculous. It probably looked as if a pimp and well, his employee in which the gal in the leopard lingerie was pimp-slapped, were having a slappin’ catfight! Of all people, he probably didn’t expect the guy who wore the leopard singlet to be the guy who fought back, but welp… I guess he just didn’t know how crazy and gangsta I was. Ya see, similar to how the Bloods wear red, I rolled with a very rowdy gang who wore leopard. We were called The Leopard Fruitcakes. Yeah, you didn’t wanna cross one of them Leopard Fruitcakes. You may get scratched or something. When the ref brought him over to shake my hand, I saw his face and I’ll never forget the little smile he had… like he was thinking, “I can’t believe this tranny looking guy just snapped back at me.” Because of that, I walked off the mat pissed off and still wanting to scrap, but couldn’t hate the guy because it was pretty funny. I went to the same freestyle club as him later on. He and his bro were really funny. Never talked to him, but everything that came out of their mouths was funny.  BLAKE, if you are reading, do one of these Remember the Wrestler articles!! Yours will be entertaining! Just don’t punch me in the face or anything! My “leopard phase” is over! So you don’t have to hate me anymore!

Previous post: Dear Wrestling Fans: Please Stop Booing PEOPLE You Don’t Know When They Are Trying to Wrestle, From a Recovering Boo-bird