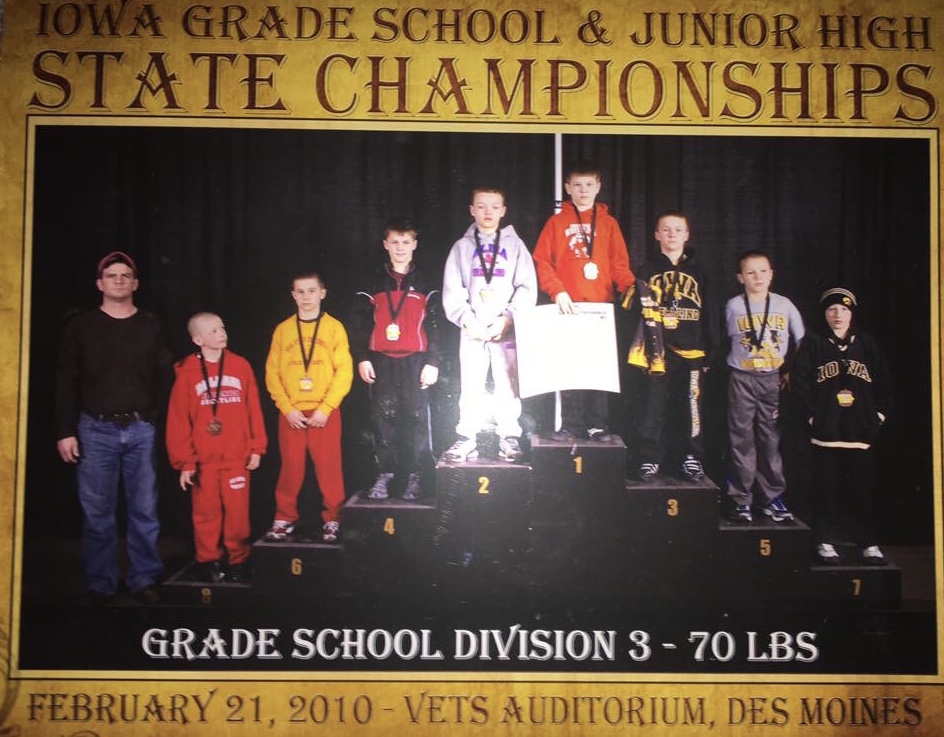 The special guest posing with them is Lincoln McClravy.

* There are 2 future HS champs on the podium although 4-5 of them were right there. Future champs are Stotts and Noftsger.

* There are 7 combined finals appearances by these guys in high school… Swafford (2), Stotts (3), Noftsger (2).

* 6 of these guys were state placers in HS. Burns-Swaff, Mulder, Stotts, Fye and Price.

* This was from Grade School State, which was started and run brilliantly by Brian Keck (RIP buddy). It had a nice run there… I wouldn’t say that it passed up AAU in terms of how prestigious the youth scene approached it, but it was right there… generally the top guys did both tourneys. This one was seeded. Troy Bennett was great with that. It was a neat tournament.

* The guy on top does all the graphic design and artwork for The Pin Doctors… that’s my baby bro Brennan Swafford. He is 16 years younger than me. He placed 6th, 5th, 2nd and 2nd in HS. Fell JUST short… was an AA as a true Freshman for Graceland and just a few days ago became Graceland’s first National wrestling champ since 1975.

* Brennan’s season was weird that year. His career has been weird. He won 4 Grade School State titles from 2nd-8th grade. Pinned his way through the tourney 3 of those years. He won zero AAU titles (with an exception of winning AAU SPW) with generally the same guys in the bracket every year. Placed every year  except one year…the year of this podium pic. He had 4 losses on the year. Lost his 1st match of the year to Jackson Feldman by a point, lost to Feldman in the finals at districts 1-0, lost to Oldham in the quarters at AAU 4-2 and got eliminated by Jackson Feldman on the backside in an OT match. Went like 60-4 with 3 losses to Jackson Feldman…who was a grade lower than all these guys.

* Jackson Feldman was one of the best guys in his grade for a long time. When he was a 3rd grader, I predicted that he would be a HS State Champ. I am generally good with my predictions, even the ones that come as ridiculous at first tend to eventually come to fruition and I was confident with that one… I am not sure what happened to him. I heard he dealt with the injury bug. I heard he moved. Heard he quit. He did wrestle here and there, but for the most part, we didn’t see him much in HS. If he would have been healthy and on the mat in HS, we would have heard tons about him. One of the biggest upsets of the tournament was him beating Stotts… and he did it twice in this tournament. Stotts couldn’t stop his cradle.

* Stotts won the AAU bracket a couple weeks later… I want to say the placing for AAU went something like this: 1.) Stotts, 2.) Michael Millage (Blockhus), 3.) Hunter Pfantz, 4.) Noah Fye, 5.) Feldman, 6.) Oldham, 7.) Josh Hilsenbeck, 8.) Reegan Meeker. A lot of people anticipated a Stotts-Bren Swaff matchup for both. Didn’t happen. Those two were the same weight their entire careers and only met twice in youth and split 1-1 against each other.

* Zane Mulder really cranked it up that year. Brennan teched him first tourney of the year that year, but at this tourney, they went into OT and had real close matches ever since then. Mulder did some stuff (and still does) that was flashy as hell, especially for people who appreciate mat wrestling. Mulder never won state, but he was good enough to…he was one of the youngest in that grade. Imagine if he had another year in HS. When he was a Senior, he met Nelson Brands in the semis… Not saying it matters a ton, but those two were in the same grade and yet there was a year and a half difference between the two. Kinda crazy to think about.  In the youth scene, I was usually in Brennan’s corner…I got pretty emotional and stupid sometimes and always tried my best to stay calm for Mulder vs. B. Swaff matches because Zane’s dad is huge and a badass… Haha, there were going to be no misunderstandings from the other corner when Zane was wrestling!

* Stotts and Zane are both at Iowa State. Brennan is at Graceland University. Zach Price and Skylar Noftsger are at South Dakota State.

* One of my favorite moments from the 2018 state tournament was seeing that pic that was being shared on social media of Zach Oldham warming up before his first match at his first and only match at state in HS…as a Senior. He had a huge smile on his face and was elated to be there. That made me happy, for I think Zach had a frustrating HS career, which I understand because I did too. He makes the comment when these podium pics are posted, “that’s back when I was good.” Nahh… he was always REALLY good… just seemed to have either bad luck or untimely lapses in high stress moments in HS. Since he started wrestling as a Kindergartner, he was one of the most consistently accomplished kids in the grade year after year until High School hit. I know how good/talented he was then and I know that he didn’t “lose it.” Sometimes HS is a tough transition in which 4 years isn’t enough time for some guys to live up to their potential, for whatever reason… Just know that Zach Oldham was without a doubt, one of the great wrestlers of that 2018 class. The kid was hitting technical moves fluently as a 1st grader.

* Noah Fye is widely believed by multiple New Hampton fans to have had the most potential/talent out of anyone that New Hampton has ever had. I mean, hell…the kid beat Brody Teske and won AAU as an 8th grader. That kid was great.

* Zach Price was a kid that I never got to see much, but always heard he was killin’ it. He wrestled for Johnston and I just never really saw them until state and the only match of Price’s that I remember catching there was his loss against Bennett. There was a lot of buzz about him every year though. He had many phases where he was ranked 1st. Just didn’t happen for him at state. I’m guessing he and Noftsger are doing well at SDSU.

* Skyler Noftsger epitomized steady, consistent, improvement and progression in his wrestling career. He was good at a young age and every single year he stepped his game up a little bit more. He took a huge jump in his skill level between his Freshman and Sophomore year. A multi-sport athlete as well. I want to say that 3 guys on this podium were 1st team all-State or state champ/placers in other sports. Swafford in football/track. Stotts was a standout football player, I heard. Noftsger was good at football and track. I have no idea how these guys did in baseball or cross country? Fun stuff.