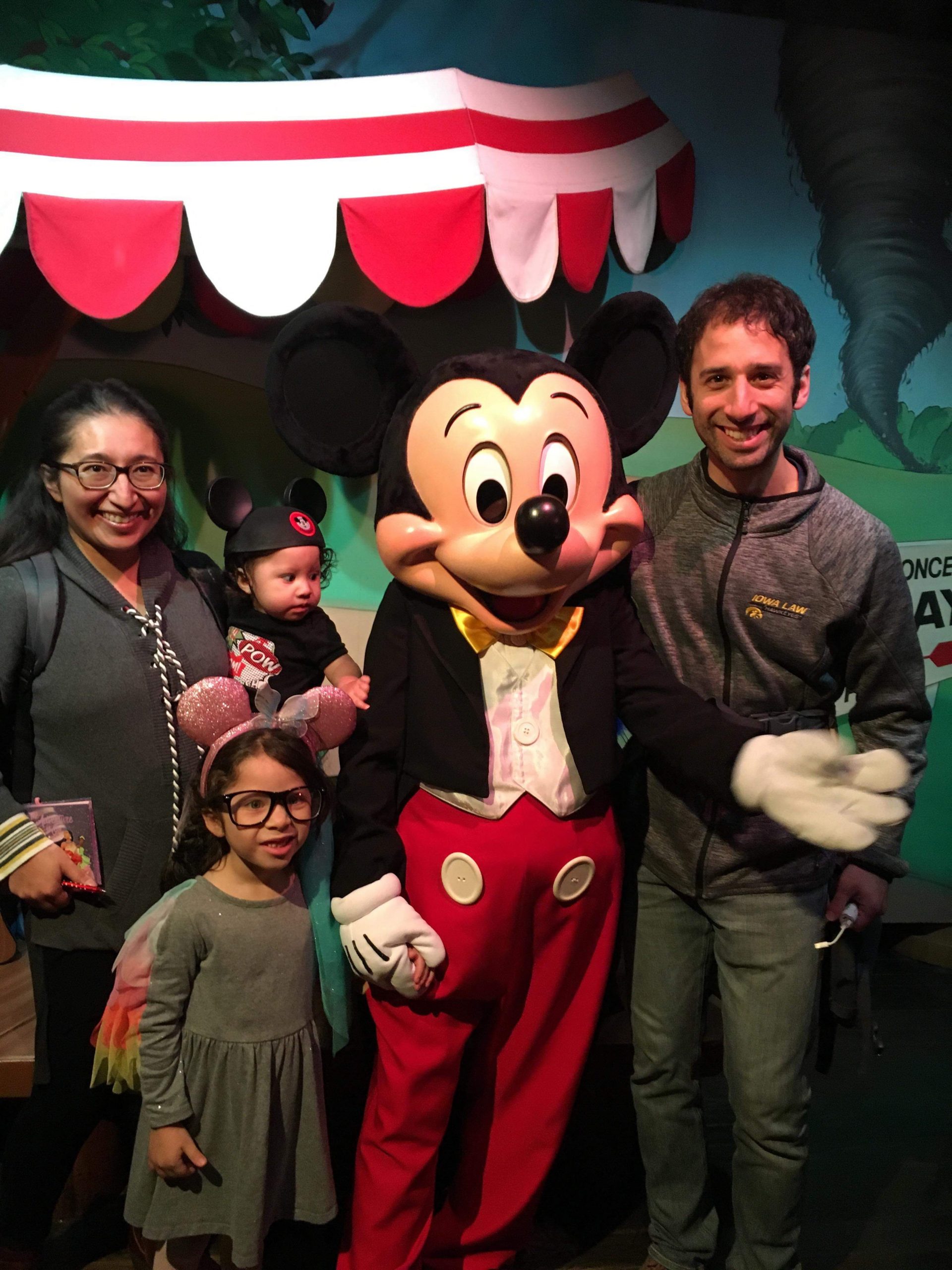 I was competing at the Iowa City, City High freestyle wrestling tournament my sophomore year of high school.  I stepped on the mat and looked over at the other corner.  My opponent didn’t look like a wrestler. He wasn’t chiseled and muscular. He didn’t have a mean dirty scowl on his face.  He looked more like the kind of guy you’d find at a poetry reading.  Big head of curly hair and he was smiling as he was speaking with his corner.

When the whistle blew we tied up.  Feeling I had a strength advantage I went to lock up a throw.  Next thing I knew, with the lightning speed of the Flash and reflexes of a cat, this kid had me on my back.  I was pinned.

After the match my Dad said of all people he had ever seen me wrestle up to that point, this kid that we discovered was from Bettendorf high school was the quickest, slickest and smoothest he had ever seen.  We were anxious to see him in his next match against my friend Andy Fry of Louisa-Muscatine.  Earlier that season Andy had won his second sectional title and finished one match shy of state qualification.  The next two years, Andy would win two more sectional titles, two district titles and have finishes at state of eighth and fifth.

Against Andy, this Bettendorf kid once again displayed a speed on the mat reminiscent of the late Bruce Lee and technique of the late Dave Schultz.  Everything Andy tried, this kid was able to counter.  It was clear that Andy had a serious strength advantage over him, but every time you thought Andy had him in trouble, he’d weasel his way out and he’d be the one to score points.

As medals were being handed out and I took my bronze and this kid took his gold, I went up to him and introduced myself.  He said his name was Andrew Bribriesco.  Immediately my Dad asked him if he was related to Anthony Bribriesco.  Indeed he was.  My Dad had remembered watching Anthony wrestle at the State tournament and knew that he was now at the University of Iowa, a member of the Hawkeye wrestling team.

It was an immediate friendship between the two of us.  I knew standing their talking to Andrew that I had made a friend for life.  Not only was he a phenomenal wrestler but I could tell in five minutes of talking to him, he was a phenomenal person and one of the most intelligent people I had ever met.

My Dad and I both thought as we followed him in the paper that year that he was going to win a state title that season.  He came close.  At the 2003 Iowa High School State Championships, Andrew lost in the semi-finals but came back to finish a strong third.  Post high school he attended the University of Chicago where he was a team captain and a three time conference champion.  He later attended the University of Iowa where he received a graduate degree in law.  He now works as an attorney in the Quad Cities.

Over the years Andrew and I have kept up with one another.  Whenever I go to Iowa City, I usually stop by to visit him and his family.  Of all people I’ve met in my 27 years in wrestling, Andrew has been one of my favorites. I’m honored to be doing this write up about him and interviewing him for this article.


1 – How old were you when you started wrestling and what interested you in the sport?

I was five and my father took me and my two brothers (6 and 7) to a wrestling practice. My father was a high school wrestler for Davenport Central and a huge Hawkeye Wrestling fan while he attended the University of Iowa (for both college and law school). This would have been during the height of the Gable era (mid-seventies and early eighties). He even took my mom (who grew up on the border in South Texas and had no idea what wrestling was) to a Hawkeye wrestling meet on one of their first dates. She loved it! Thus, to truthfully answer the question, my brothers and I had no choice! I assume this is a similar story with many throughout Iowa and the heartland.

2 – Being the youngest of three brothers, how important was it to you to do as well as they did?

Very important. As the youngest, I always looked up to my brothers who were physically bigger. Although competition amongst siblings is natural, I believe a bigger motivator for me was not wanting to let them down. A sense of belonging comes with similar success. I strived to make my parents, brothers, and my whole family proud.

3 – In high school you had phenomenal technique and an unreal quickness that lead you to three state qualifications and a third place finish in 2003.  Talk about how you developed your quickness and technique.

What I lacked in strength, I began to focus on my strengths, which was technique on my feet, flexibility, and speed. I practiced lots of takedowns. I watched others and tried to mimic them. I honestly cannot specifically name just one person, but I always loved watching “slick wrestlers” and trying to copy what I’d seen.

4 – Being of Mexican heritage, wrestling has been a great sport that many with Mexican heritage have excelled in, what does it mean to you to be among the many successful?

This is a great question. I am proud of my ancestry- my grandmothers were born in Mexico and my grandfathers were first generation in this country, with their parents being from Mexico. Growing up in Bettendorf, there were not a whole lot of Mexican-Americans / Latinos. As a wrestler, I wanted to look-up to those that shared a similar background, and had to settle on Eddie Guerrero and Rey Mysterio Jr. Although they were “greats,” I have enjoyed seeing the explosion of Latino and Latina amateur wrestlers that have gained success, among my favorites being Henry Cejudo. Wrestling can serve as a metaphor for the American Dream and how hard work, dedication, and grit can help with success, no matter your background.

5 – Post high school you wrestled for the University of Chicago, a school known for its rigorous academics.  How did you manage wrestling with such a challenging academic load?

To be honest, I probably spent more time in the library than in the wrestling room. U of C’s motto is the “life of the mind.” During the winter months, I felt torn because I had loads of school work to do, but I knew the only way I could get better and better on the mat was from practice, lifting outside of practice, and focusing on wrestling. I don’t regret choosing school work over wrestling success, although I sometimes think about what my career would have been like had I prioritized wrestling. I made the dean’s list every year. I earned NCAA Scholar All-American Honors. And my senior year, I was the recipient of the Mary Jean Mulvaney Award. This Award is given to the senior varsity athlete at the University of Chicago with the highest overall GPA. According to my coach (Coach Leo Kocher) I was the first wrestler to ever win that award.

6 – You went on to obtain a degree in law from the University of Iowa.  Today you’re a very successful attorney in the Quad Cities. How does a sport like wrestling prepare you for battle in court?

As both my parents were lawyers – just like wrestling – I had no choice. But just like with wrestling, I have learned to love it. There are so many similarities. There are two opposing sides in the area of law I practice in: some could call it a battle of truths and you not only have to outwork your opponent, but you also have to utilize strategy. Wrestling has prepared me to work hard, but also other lessons. Wrestling teaches someone how to take losses and wins, and how to improve from both losses and wins. Losses are personal. Wins are personal. There are a lot of similarities when I win or lose a case, but just like wrestling, you try to learn from both.

7 –  Over the years you’ve stayed active in the sport as a fan.  You attend Iowa Hawkeye duals and you keep up with Bettendorf wrestling, as well as Chicago wrestling.  How important do you think it is as a former wrestler to attend duals and tournaments?

Extremely. I am trying to take my children more and more, and they love it! My daughter loves the Hawkeyes and when we are wrestling at home, she always wants to be the Hawkeyes because they always win! I wish I could attend more alum meets at Bettendorf and at the University of Chicago, but with two children and a busy law practice, I haven’t been able to as much.

8 – As a progressive, wrestling is continuously becoming more and more inclusive.  In most recent years the inclusion of women has grown tremendously.  More and more states are sanctioning girls high school wrestling and the NCAA and NAIA now have official women’s wrestling programs.  What do you think this means for the sport?

Another great question. Wrestling is for everyone and I am glad to seeing wrestling becoming more popular with girls and women. I have a four year old daughter, who has taken an interest and enjoys seeing the Hawkeyes! If she chooses (unlike me lol) to get involved with wrestling, I am glad she will have the opportunity to have success in a sport that has taught me so much.