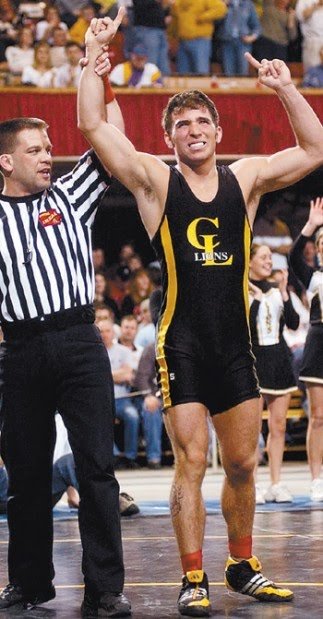 Growing up on the youth wrestling scene, there were several people we would run into that we would only see once per year, which would be at the AAU State Wrestling Tournament and when we would see them, we would have our annual lengthy conversations with them.  Usually this consisted of people or families that my dad or mom knew from their younger years.  This was the case with the Weber family and the first time we met them, we were introduced as, “Joshua, Justin…meet your cousins, the Weber boys.”  It didn’t surprise us at all that we were related to someone that we hadn’t met before.  All of our grandparents came from big families, most of them had daughters who married into different last names, making them more difficult to keep track of.  But these cousins were wrestlers…and they always had a wall chart and a couple of state medals in their possession when we met them, so they were obviously really good. So this was really cool.  The Weber boys were Nick and Tucker, from Clear Lake.  Their father, Gary was the longtime (and very successful) head wrestling coach for Clear Lake HS wrestling.  We were related to them on the McLaughlin side of my family. My mom was a McLaughlin.  So was Nick and Tucker’s mom…and she was also from Mepo.  My parents and Nick’s mom, Cindy grew up together.  Small world.  It is amazing, some of the wrestling talent that has been produced on the McLaughlin side of my family. With all this said, it was a given that I always rooted for Nick and Tucker in their wrestling endeavors and a couple of Nick’s moments at state wrestling stick out to me to this day as a couple of my favorite state wrestling moments ever.

My dad of course. He said as soon as I could start walking he got me started in wrestling. 😂

My dad wrestled in HS in Western New York and ventured out to Iowa to wrestle at Upper Iowa where he met my mother, Cindy (formerly McLaughlin). That’s where the Weber/McLaughlin gene pool of wrestlers got started, I guess you’d say. My brother, Tucker wrestled at Clear Lake. He was a 4 time place winner and runner up. He wrestled at Wartburg as well.

I was a 3x youth state champ. Josh Moorhead from Newman Catholic and Brett Trenhale from NCNK were rivals. I had a lot of good battles with them in the youth through high school days.

Wrestling for your dad, who happens to be a Hall of Fame coach definitely had it’s pros and cons. As a freshman, he was pretty tough on me. Looking back, it was what I needed and he only wanted to get the best out of me, but as an immature 15 year old, I probably didn’t show him the respect he deserved. We worked through our difficulties my freshman year and had a great father/coach/son relationship the final 3 years of my wrestling career.

Very basic. Single, double, high-crotch. Bottom was clearly my best position as I used the same move to win some big matches down at state. My dad brought the move from New York and it’s been called the “Weber roll” after my dad since as far back as I can remember.

How about that McLaughlin wrestling blood? 😁

Our family bloodline is pretty good for Iowa HS wrestling! Our older cousin, Gary McLaughlin was a state champion at Hampton. Then my brother Tucker and I were finalists. It was always fun rooting for the Swafford boys down at state. You, Justin, Brennan, and Shea. Your family has a ton of state medals to add to the group. Too bad we couldn’t all be on the same team!

I wrestled one of the Kuper brothers from Osage every year in high school. Reed was a state champ and beat me every…single…time. Then I wrestled Dane many times including sectionals, districts and the state finals as a senior. Very tough, hard-nosed farm kids that you always knew you’d have a tough battle ahead of you with if you wrestled one.

The obvious answer is my dad, but many coaches when I was coming up in the ranks were also very influential. Tom Bieber, Kim Trebil, Mark Doebel, Pat Harlin, Larry Thompson, Bob Kopriva, Brent Rolland, Fred Wieck, Eric Perry, Steve Wicht, Darren Jones, Ryan Behr, Dale Richtmier. Pretty much every coach a wrestler comes into contact with plays a role in their success.

Yes. Made state duals 3 of my 4 high school years, but we always ran into the powerhouse at the time, Emmetsburg and generally got knocked out early.

I was pretty much raised in the high school wrestling room, so pretty much all the former Clear Lake studs were my idols. Andy Thompson, Dave Doebel, Dustin Denhartog, Mike Lester, Justin Washburn, Alex Ibarra, etc. They were all tough and physical.

As a Hawkeye fan it’s hard to say this, but I love watching the Penn State guys wrestle. I love that fun/let it fly style. Guys like DT, Nolf, Bo Nickal, Retherford, etc. They seem to make up moves during a match and it’s very exciting to watch.

I was big into hip hop/rap. And of course the “Rocky” soundtrack.

My junior year in the state semifinals to Brett Hakeman from Union-Laporte City. I was undefeated going into the semis and felt I had a great shot to win a title that year.

I would do more off-season wrestling.

I strictly wrestled during the season only. And I only went to one camp every summer.

I honestly felt good all year. I didn’t cut a single pound. I weighed in at the same weight as the 152 pounders down at state. I felt by not cutting weight it really helped me all year with my conditioning and endurance.

Our era was very physical, tough, hard-nosed, “grind it out” type guys. But these guys today are so much more advanced technically. At the end of the day, talent always wins and I think the new generation would out scramble us.

No, I played football at Wayne State College in Nebraska then transferred to Minnesota State Mankato.

Spending time with my kids, girlfriend, golf, and enjoying anything on the lake in the summer.

I’m a foreman for Blattner Energy. We build wind turbines all over the United States.

Wrestling teaches you so many life lessons. From work ethic, to leadership roles in the workforce, wrestling plays a big role in many of our lives after wrestling.

Sadly, because of my hectic schedule with my work and family I’m not. I still love the to watch it every chance I get, though.

Listen to your coaches. They’ve probably been in every situation on and off the mat that you’re going through so listen to them. They know what’s best for you.

Absolutely not. I did wrestle my dad at the Clear Lake Beach Brawl a few years back and felt bad whooping up on him a bit. He took it a bit more serious than an exhibition and I was sore for about a week. So my wrestling days are officially over! Haha! If my brother Tucker ever wants a shot at his older bro, I’d probably let him give it a run at the next Beach Brawl!

When we got done wrestling at the state duals my senior year, we went to Ryan’s steakhouse for dinner. As we were loading the team bus, my dad called me out and wanted to go takedowns right in the parking lot grass. Well, I clearly ate too much and musta slipped on the concrete because he did take me down and my teammates seemingly enjoyed seeing a 45 year old man “still have it.” He still brings it up to this day. 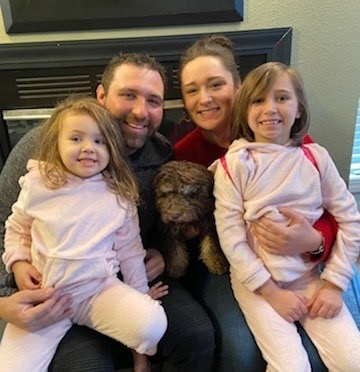