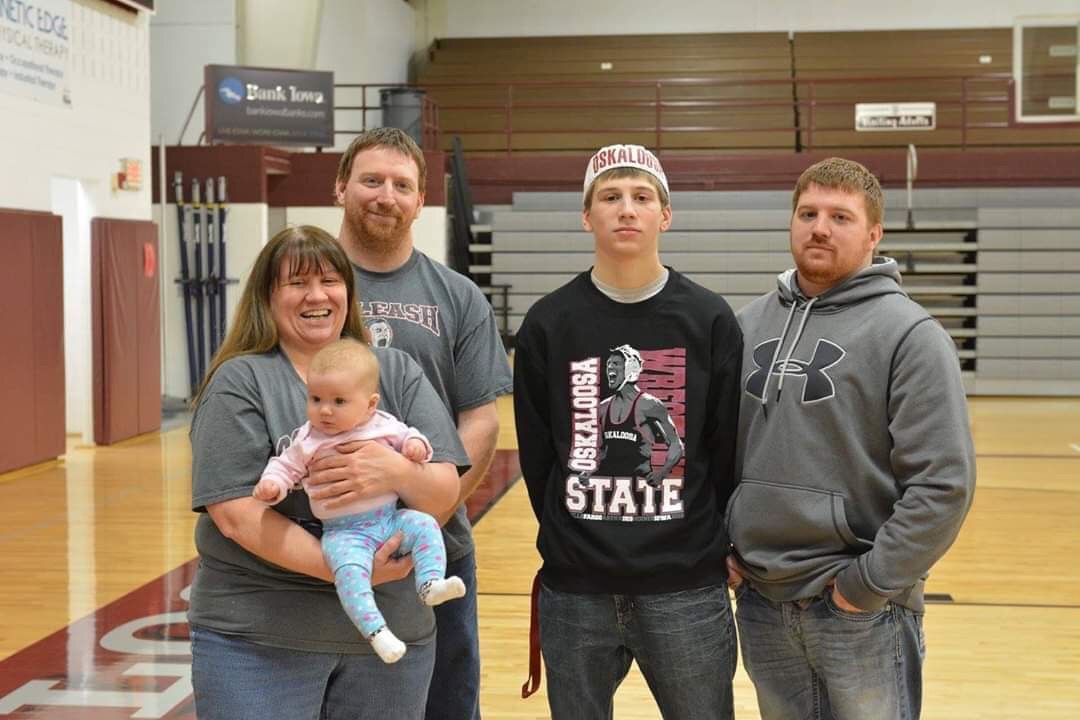 My three boys; Marcus Hollingshead, Brett & Drew Sams all wrestled. I think they were competitive and had successes at each level they wrestled. They all started young and qualified/placed at AAU state/national tournaments. All three qualified every year of HS state (Marcus was ineligible his soph year). They all made the podium: Marc 2nd his senior year, Brett 4th junior year and 5th senior year, Drew 7th his junior year. They all had the opportunity to wrestle collegiately. Drew is the only one who chose to compete in college. He has been successful at Graceland qualifying both years (so far) at nationals. My youngest daughter Maddi did a year or so around 3rd grade.

Our twins were born in June of 1991. They were the center of everyone’s attention. Marc turned 4 the day we came home from the hospital. We needed something that he could do that was all about him. I worked with the wife of one of the Osky youth coaches and we had a slight family connection to another of the coaches. So we went with wrestling.

Geez, there are a lot of moments from 1992 til now. Gosh, there have been so many matches youth and high school.

Marcus: 3/4ing Kyle Anson in the last 10 seconds of a match in youth. Beating Blasberg at Osky duals his senior year. His whole senior state tournament.

Brett: Winning AAU in 8th grade. The wrestleback against Smith at districts. That crazy quad ot at state against Duke where he just lost perspective on the ot thinking he could let him up and go for the takedown, but letting him up ended the match.

Marcus coaching the youth program in 2011 while Drew wrestled was neat. Then coaching at Young Bucks. Getting his HS coaching cert and assisting at Osky. Brett getting referee certified and going to numerous youth tournaments. Brett broadcasting. If you haven’t heard him broadcast you are missing out. I have had to go online to hear him do play by play of Drews state matches. You feel like you are there. Drew’s commitment and buying in to a program and his willingness to give back. Though I am proud of their wins, I am also proud of their losses. This sport has made them the strong men they are today. I am more proud of that!

Crazy with a capital C! My boys say I know nothing. Lol. My mom friends usually like to sit next to me so that they copy what I yell. I don’t just yell for my kid. I yell for their teammates, maybe an underdog, four mats over, maybe a double OT match of 2 random wrestlers. At high school districts, I am often asked who do we need to win…so we can cheer for the chance of a wrestleback. I zone out when I get caught up in one of their close or pivotal matches. When that happens my heart pounds, I don’t have a clue what I yell just that I do yell.

You betcha! It has given them a work ethic. They all know that you gain from what you put into something. None of them believe in participation trophies. Wrestling is all you, just you and your opponent, win or lose…no excuses. They have all given back too. I know there have been numerous Osky tournaments that all 5 of my kids as well as my husband and I worked. Until Drew graduated, it was what we all did every winter. My girls were wrestling managers and cheerleaders. The sport gave us all a chance to be involved and to help the program.

No. I wasn’t a fan. The only wrestling I watched in high school was because I was in the pep club. At East DM, to letter as pep club we had a punch card with every sport. We got these punches attending events. I had to attend 2 wrestling events to letter. I did work for the athletic director in college. He was the basketball coach and the president of the Ozark Collegiate Conference. I did his basketball ball stats, put together an athletic grade program to track student athlete eligibility and was his SSID.

No. I have been turked, 3/4ered, ball and chained and bow and arrowed enough in my living room.

So many people. Basically three different groups of people. With Marc, we started with the Grahams,’ Moyers,’ Andersons, etc. My husband and I knew nothing about wrestling. The parents we traveled with, add the Pickeralls, Littles and the ones already listed, they taught us as we went. Oh the memories. We traveled a lot, 2 or 3 places a weekend in the beginning. With Brett, add Chris Milburn, Browns’ and the Jemisons.’ With Drew, add Jesse Burress, the Fouberts,’ Wisses, DeJong, the Beebes’ and Zickefooses.’ As the older one/s was in high school, we had to rely on others to take the younger one/s to youth tournaments . The high school coaches, we span 7 staff changes, each had coaches that influenced them. I fully believe it takes a village. We had girls competing in gymnastics, track and softball so we relied heavily on our village.

Different. Marcus was unconventional. He would look like he was going to lose or get pinned and a second later he was pinning his opponent. He had amazing hips from hell!! And was a legger. Brett was an “in your face, I will break you” intense wrestler. He wanted to wear you down and win in the 3rd period. The more dramatic, the better. Big on splits, spladles, wings. He was super strong. Drew watched his brothers and learned from them! He is a bit of both of his brothers (hips, legs, wings, splits), but Drew is analytical. Sometimes too much.

It’s a love hate relationship. That rollercoaster ride of emotions can wear you out. I do love watching them compete whether it be football, wrestling or baseball.

I think moms are important in wrestling. You are the biggest cheerleader, the doctor, the organizer, the counselor, the mediator and the nutritionist.

Keep a bag of tricks, fill it with everything (gear, medical supplies, contact/glasses, healthy snacks, water bottle, copy of birth certificate and all affiliate cards AAU/USA insurance) bring it everywhere. Then learn everything you can about the sport. Mostly be there, share this adventure with your wrestler. Remember, you don’t have to have all the answers, just the best hug. Don’t fight their battles, but have their back. Don’t add to the pressures they already feel. Love them no matter what. 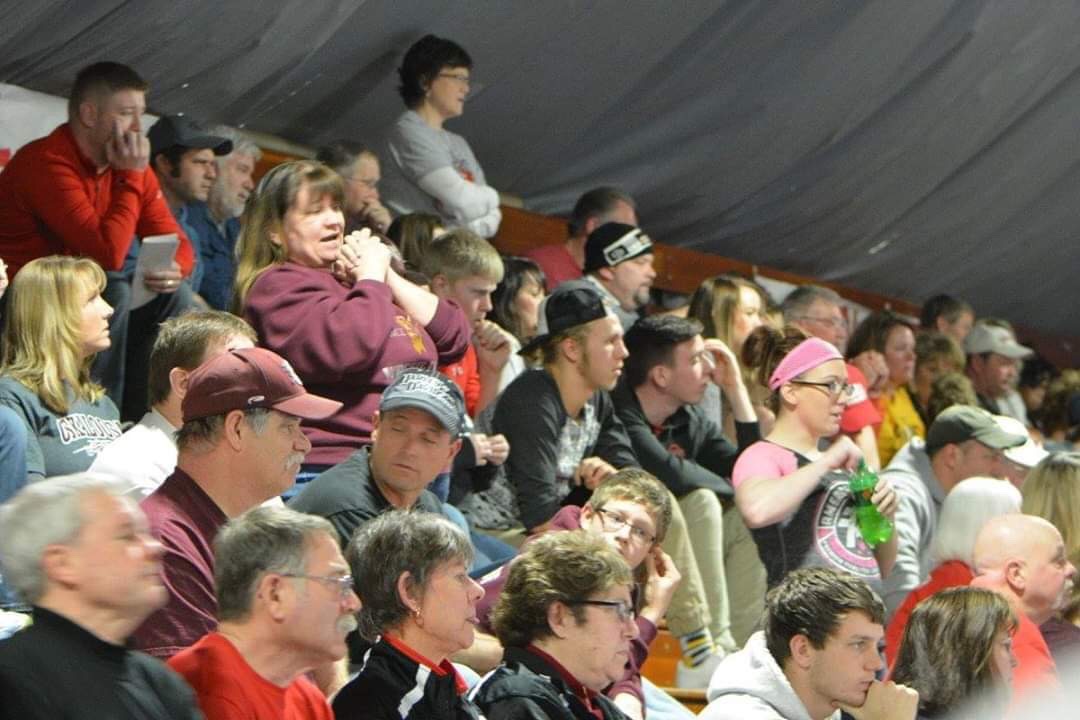