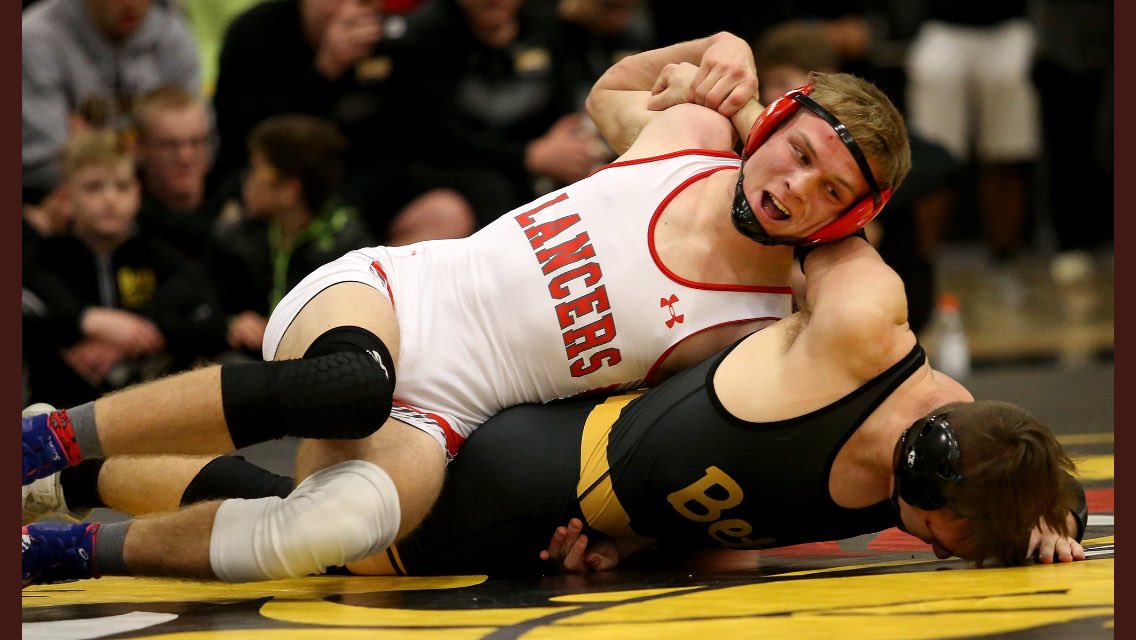 What sports do you play?  How have you done in each of them to this point?

I play baseball, football and wrestling.   I have played all 3sports since kindergarten.

In football, I was first team all-district quarterback my senior year.

Locally, Colin Kreiter and Ben Nagle.  Colin played the same 3 sports as I do and was very good at all of them.  Hawkeye wrestlers, Derek St. John, Mike Evans, and Tony Ramos are wrestlers I looked up to.  I have also liked Jason Heyward, Bryce Harper, and Madison Bumgarner in baseball.  For football, Lamar Jackson, since his college days at Louisville. Ray Lewis is another one. Also, Pat McAfee, not only for his punting but also his entertaining podcast.

Say there is an athlete who is good at 3 sports, but wants to quit 2 of them because they think it will benefit them if they play just one sport.  What advice would you give this kid?

If you are blessed enough to play multiple sports, do it for as long as you can and don’t let anyone else convince you otherwise.  Those other sports help you more than you might realize with the one that is your favorite.  I have also found that most college coaches like multiple sport athletes. You also only have a limited time in your life to play organized sports with your classmates and friends so take advantage of it.  You can’t create those memories if you don’t play, and you can’t turn the clock back when you regret it later.

It helps me at the plate as well as the mound in baseball, but especially on the mound.  It gives me confidence in that one-on-one setting much like wrestling.  Wrestling has helped me keep a tough mindset and stay focused in other sports and situations.  Before this season, I played some defense in football, and wrestling helped me to be a better tackler.  Football has probably helped my footwork on the mat and vice versa.

Have dreams of being a pro athlete?

It would be awesome to pitch in the big leagues someday.  Even making it to a minor league team would be fun and is cool to think about.

In baseball, my sophomore year, playing at Principal Park in the state tournament was pretty awesome.  In football, winning our district and beating CR Xavier in the play-offs this past football season, and in wrestling, it would be winning Keith Young my sophomore year and placing 3rd last season at state. All those experiences were pretty fun.  Also, getting to compete with my classmates and friends and the relationships we formed along with the memories we have made in every sport since kindergarten have been a blast.

Would you like to give a shout out to any coaches or mentors that helped you reach the point of being a successful and versatile athlete?

My parents for signing me up and getting me to events when I was younger and for always supporting me, along with my youth and high school coaches, but especially, my strength and training coach, Tony Stewart, and my wrestling coach, Drew Kelly, for pushing me to be a better athlete and person and also understanding and supporting me being a three-sport athlete.

Yes.  My parents and my two older sisters played various sports growing up and in high school, and my younger brother does the same three sports I do.

How good are you feeling about this wrestling season?

I feel good about it.  I was not able to compete right away due to a high ankle sprain that I suffered in our last play-off football game, but it is getting better and I am looking forward to the second half of the season.  I am confident that I can do well at the state tournament again and our team is looking very solid as well.