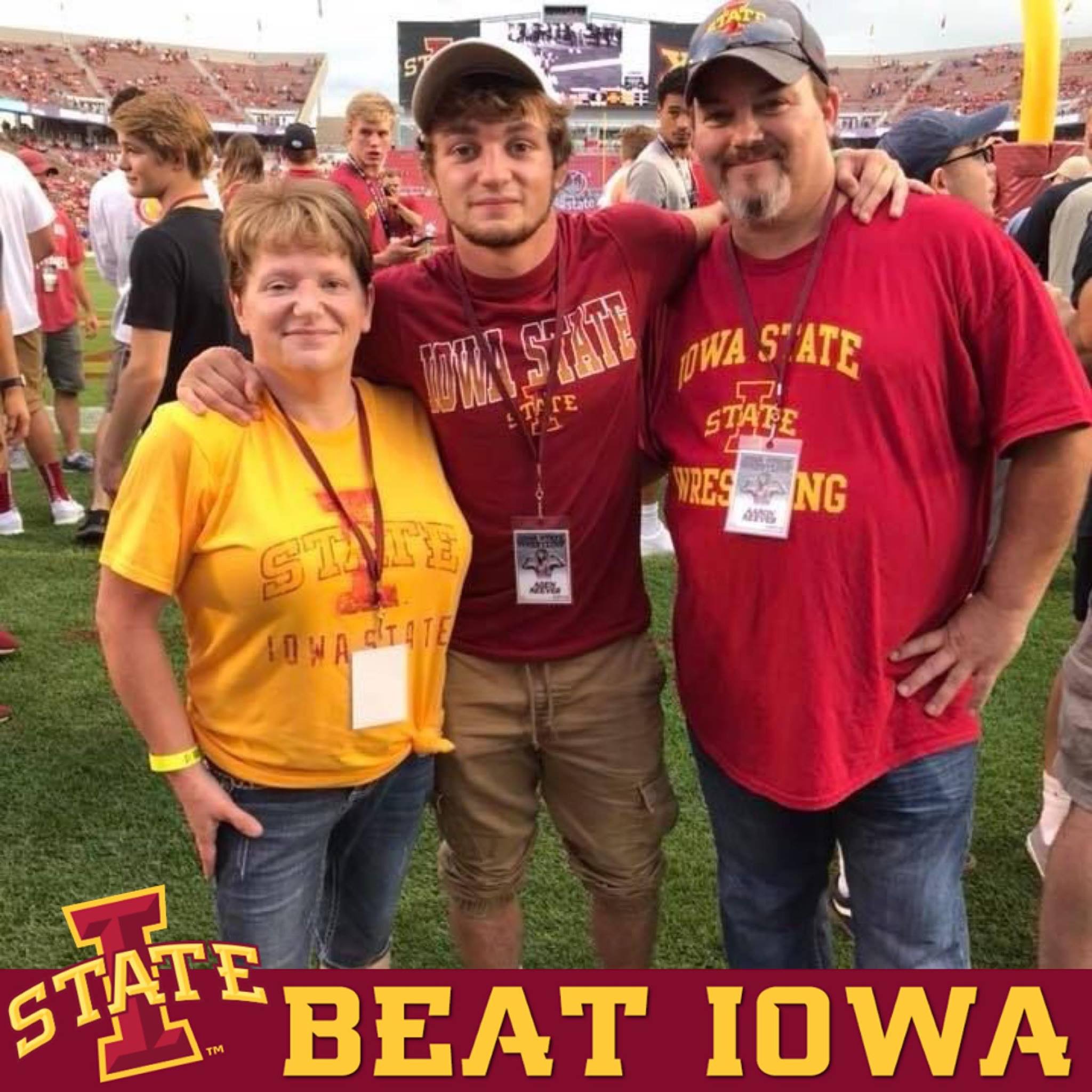 Aden Reeves. He wrestled for Albia HS and currently wrestles for the Iowa State Cyclones.

How have they done in the sport.

He has done well his high school record was 166-3

I did grow up around wrestling. I am 10 years younger than my brother and cousins who all wrestled..my brother Scott was a multiple time state placer..my cousin Clark Yoder was a 3x state champ and his brother Ross was also a state champ..so I spent a lot if time in a gym! Aden got started in wrestling because he had no choice..no really he liked it so my husband took him to a practice and he never looked back.

Of course I am proud of his state championships and Fargo All-American status, but I am most proud of his willingness to give back to the sport..he enjoys working with the youth and is so encouraging to them.

Yep, I am 100% the crazy wrestling mom. In fact I know there is some video documentation out the to prove that!

Absolutely! It teaches such important life lesson such as not everything goes your way and you have to figure out how to deal with it. It teaches independence because it is just you out there and if things are not going as you think they should you are the only one able to change that!

Aden has always been such a polite, outgoing person and everyone likes him because of it because, well…”why wouldn’t someone like Aden?” You guys did a great job raising him. What’s the secret?

Well thank you I appreciate that. Aden has always been “an old soul” wise beyond his years and pretty darn easy to parent honestly. We have tried to instill in him good values and that there are consequences to his actions and that is on him no anyone else. He is lucky to have a lot of extended family to give him support but also hold him accountable for his actions.

How did you react when Aden won his state titles? Composed or was it pretty crazy?

Yeah it was pretty crazy..I honestly did not watch either match, I just couldn’t do it. After his 3rd place finish his freshman year, the state titles were pretty sweet redemption!

I was a manager..mostly because my husband was on the team!!

I think I would have if girls wrestling was offered. As for now I am too old..but I will say I threaten my daughter Lilly with a match all the time! Honestly she should of wrestled..she is way meaner than Aden. Lol!

Oh my, there have been a lot. Honestly I give credit to Dan Roland, we were introduced to him by my brother in-law, Craig Reeves and he ended up on the Iowa AAU team and got to go to Tennessee duals. At about the same time we met Young Bucks coaches Tom and Nick Pickerell and Aden fell in love with both of them and joined their club.

When did you notice Aden stepping it up a level in his wrestling game? Was it a gradual or immediate process?

The end of his 5th grade year. Once Dan got him on that team to go to Tennessee he seemed to flip the switch and has never looked back.

No, I am about as non-athletic as they come!

Without a doubt my favorite memories. I hope to have several more years of great memories with his collegiate career.

I would say very crucial. I mean not only are you the laundry doer, bag-packer and meal-maker and you are sometimes the voice of reason. The calm presence at home, most of the time anyway!

Enjoy every moment because it goes by so fast. One minute they are 4 or 5 out there rolling around on that mat and the next minute you are attending their Senior night! Also take the good with the bad, it all evens out in the end!