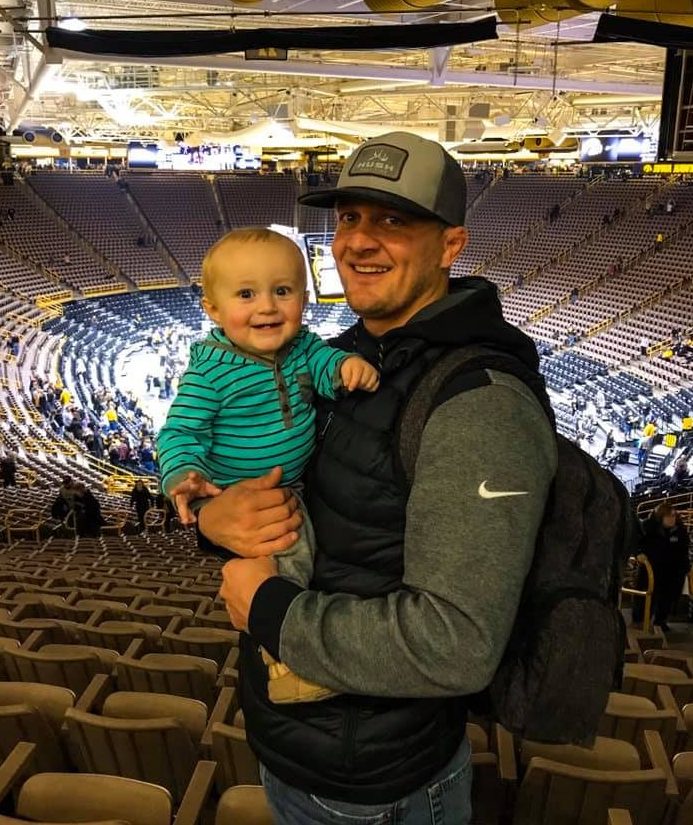 If you are to list some of Iowa high school wrestling’s all-time most underrated wrestlers ever, Justin Bohlke would be right up there.  He was about as good as you can get.  Everybody always mentions the fact that Mario Galanakis from Nodaway Valley was one of the best guys to never win a state title… His Senior year, a lot of people considered him a lock to win state, but was upset by Freshman, Chad Beatty from Wilton first round.  That bracket consisted of 3 future Hawkeyes.  Beatty, Galanakis and Ryan Morningstar.  And you know who won that bracket?  It wasn’t either of those three.  It was Justin Bohlke from Kingsley-Pierson. He was a guy who won and won and won and won and defeated elite wrestler after elite wrestler after elite wrestler and did so quietly.  He wasn’t brash or in people’s faces or cocky…not even in the slightest. Just seemed like an extremely nice guy.  Most wrestlers have blemishes on their record where they had a match or two where they were just dominated.  Bohlke never had a match like this.  If he lost, it was for sure close. And he only lost 5 times in high school.  No one, and I mean no one seemed capable of racking all kinds of points against this cat.  He was always in good position, never got in trouble or went to his back and was able to rack up the score himself with his own good offense.  I’m happy that I was able to get ahold of him for this. One of Iowa’s best to do it. Northwest Iowa wrestling fans are proud of the Bohlke brothers to this day.

I remember my 2nd grade teacher handing out some information about youth wrestling. I ended up going to some youth practices and a couple local tournaments that year.

My younger brother, Brandon and I both wrestled along with a couple cousins. My brother ended up winning two state titles and most of my cousins made the podium once in their high school career.

I wrestled in the AAU state tournament in Cedar Rapids 3rd – 8th grade. Besides my first year I think I placed top 8 every year but never made it to the finals. I wrestled a lot of studs from from the state of Iowa growing up.

My Sophmore year after losing in the quarterfinals I remember pouting like a baby and feeling sorry for myself in my first match on the backside. After trailing, we ended up in a scramble and I put the kid on his back. Somewhere in that match I decided to get back to wrestling and went on to win nearly 100 matches in a row. Mentally I’d call that match a turning point in my career.

I had a good gas tank and never got tired. My best positions were on the mat. I could ride most guys out if I wanted and was always quick enough on the whistle to get out. I was average on my feet until I wore guys out. I gave up too many first period take downs which costs me some big matches.

Prior to winning state as a Junior, what were you ranked that season?

I’m not positive, but I think Galanakis was number 1. I was probably somewhere in the 2-4 range?

When you won state as a Junior, your bracket at the time and in hindsight was one of the toughest ones in the tournament. I mean, heck it has 3 future Hawkeyes: Chad Beatty, Ryan Morningstar and Mario Galanakis. How cool is it knowing that you won a bracket as stacked as that one?

It’s neat to look back on. I knew Galanakis was the real deal since he beat Sundell. I was aware of the Morningstar name growing up and someway found a way to beat him even though I gave up multiple take-downs. I honestly didn’t realize how good Beatty was at the time since he was only a freshman and from the opposite side of the state. We never wrestled each other. It wasn’t until he finished his high school career and then went on to wrestle for Iowa that I became fully aware of how good he was.

Who are some of the guys who got beaten out of the bracket you won as a Junior?

No clue. I’d have to go back and look at my bracket.

All of them. I used moves and tips my youth coaches taught me throughout my career. My high school coaches Clint Koedam and Tom Stauch showed me what it took to be tough and push your limits. To this day my high school practices were still some of the hardest workouts I’ve been through. In college, Reitmeir, Ramos, and Carlson taught me the importance of fine details.

In high school we won several conference, sectional, and district titles but we never put it all together at regional duals or the state tournament when it counted. My redshirt freshman year my college team placed 2nd in NCAA Division II National Finals. That same year we placed 2nd at the Cliff Keen national Duals out in Cleveland. We ended up having 8 All Americans and all 10 of us qualifed for the tournament.

Growing up Mark Ironside was my all time favorite. We always watched the Hawkeyes wrestle on IPTV and then my dad and uncle finally took us to National Duals to see the real thing.

Right now, my favorite is probably Yianni. Anyone that puts points on the board, is creative, and pushes the pace is fun to watch.

You name it and we listed to it in the practice room. I never really listened to music during tournaments or dual meets though.

I got pinned once in my career. I think it was either 5th or 6th grade at AAU state.

I would have definitely put myself on a good meal plan and maintaned my weight better my redshirt Freshman year of college. If I would have spent as much time working on technique, watching video, etc. in college as I did on a treadmill and worrying about keeping my weight down, I would have been a hell of lot more successful and wouldn’t have burnt myself out like I did.

I’m proud of the win percentage I was able to put together. I was right there in every match in high school. I never lost by more than 2 points and think my combined 5 loses were by a combined 6-8 points. I believe all but one of thoses loses went on to win a state title in their career.

Two of my five loses were to Mack Reiter and Dan LeClere who each won 4 titles. I beat Ryan Morningstar in the quarterfinals and he went on to win 3 titles. When I won state, I wrestled Jeremy Johnson from Clarksville in the finals, who was a couple time finalist.

Not really. I spent my summers working construction. During the time there weren’t a lot of freestyle programs or tournaments close to home.

I dont’ know if you can call it a groove, but I did bump up a weight class to wrestle returning place winners every chance I got.

Who would win in a match between you and your brother, Brandon?

I think I can at least still major him. Wrestling each other so many years I know how to take him down and what kind of scrambles to stay out of. He had a knack for putting some good wrestlers on their back and was a lot meaner than me.

I wrestled Divison II for two years for Augustana in Sioux Falls, SD. I redshirted my first year and qualifed for Nationals as a redshirt freshman. After two years I transfered for my major and hung it up.

I played football all four years and golfed my senior year in high school.

I try to follow Iowa, SDSU, and Augustana. Anymore I generally just follow college wrestling and football. I make it to most of the Iowa duals and have season tickets with a group of buddies.

Bow hunting, fishing, and spending time with the wife and kids.

It taught me how to handle adversity and stay calm when things don’t go your way.

I’m a Sr. Project Manager for a General Contractor building commercial projects. We just relocated for my wife’s job and bought an acerage east of Gilbertville a few months ago.

Its been almost 15 years since I’ve put on the wrestling shoes. If my son Leo decides to wrestle, I’d like to get back involved with a youth program.

I’m not sure my lungs could handle it but I’m sure the family would get a kick out of it. Maybe my brother and I will come out of retirement to settle the earlier question.

I’d give a shout out to everyone that kicked the crap out of me back in the day.

JUSTIN BOHLKE: My Senior year, both my brother, Brandon and I were in the semifinals. I was the returning 1A 125 lb state champion wrestling at 1A 130 that year and my brother was just a Freshman at 1A 119. My brother was out wrestling his semifinals match when my semis match was assigned next to his mat. I remember my brother being down 10 points when my match started. After my semifinals loss I vividly remember sitting on the warm-up mats full of gravel down in the basement of “The Barn” and telling Brandon to put his wrestling shoes back on because we still had to wrestle consi-semi’s yet. And he told me he didn’t have a semi-consolation match, which confused me because he was being beat so badly last I knew. Long story short the kid he was facing took a shot, got extended, and my brother hit a butcher and pinned him. I had no idea he won and made the finals as a Freshman until he showed me the big ole bruise on his thigh. I was totally clueless.

Video of the 125 lbers receiving their awards, all classes…this includes Bohlke being given the gold medal: