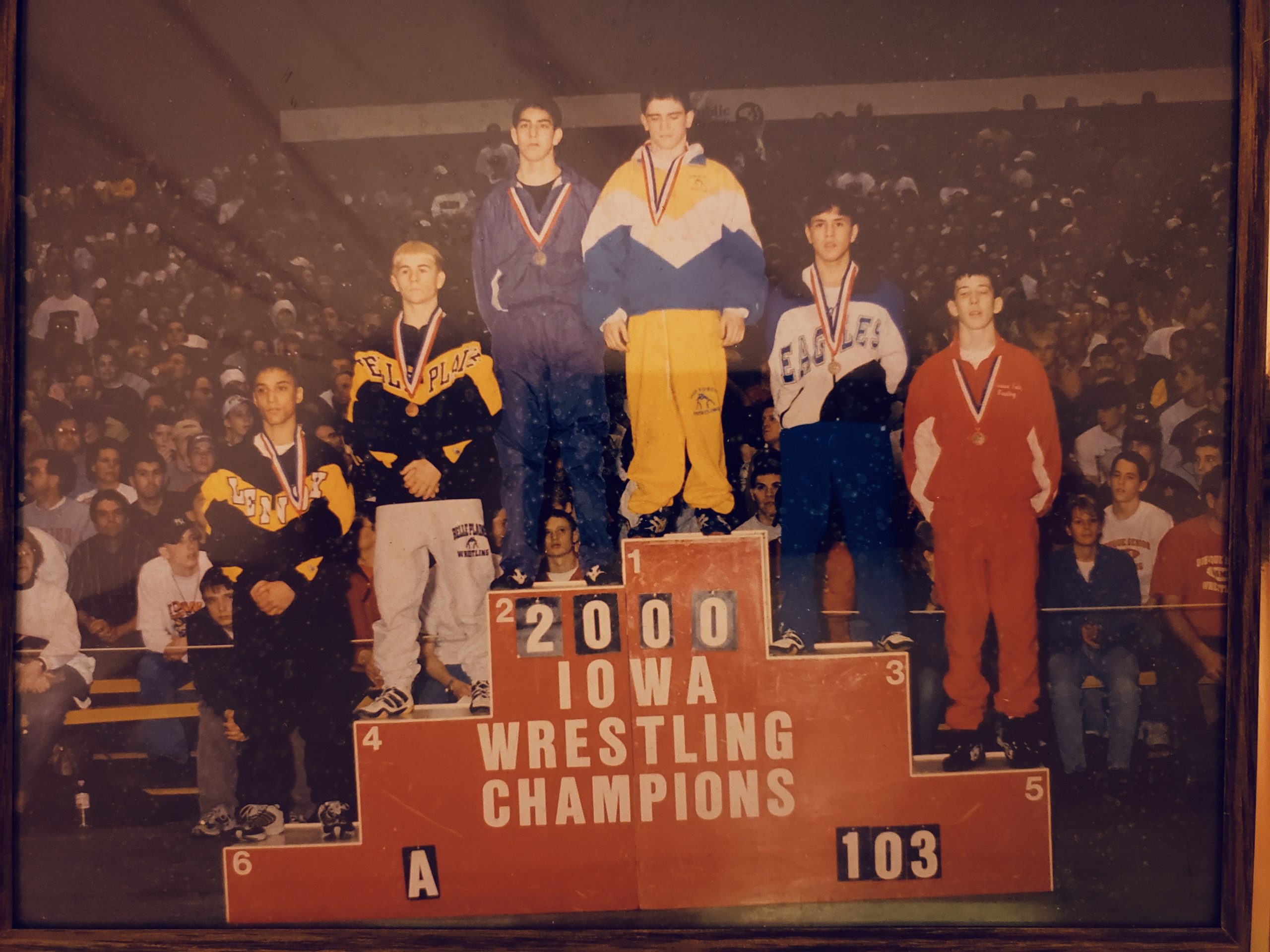 * 3 of these guys won state (Reiter, Reiland and Davila).

* Kalina and Bender were finalists later on.

* Mack Reiter was a 4 time state champ and a good one. Ya know, I posted about wrestling all the time on the forums dating back to when I was a Sophomore in high school and was always not anonymous and very opinionated.  There were a few guys that I never gave nearly enough credit to. I had my moments where I was unfair. Mack was one of them. Moza Fay was another. Dusty Pollard was another. People who remember that era may see a pattern here… these were guys that my brother, Justin had heated rivalries with. So I’m just going to be honest, it was petty, sour grapes that prompted those terrible takes. Mack is a kid that my bro went back and forth with (on the freestyle scene, Mack beat Justin both times they met in JH AAU Folkstyle) and he is a guy who had a lot of good things happen to him while Justin had moments where he seemed like he couldn’t catch any breaks… to a point where quite a few people coined the term, “The Swafford Curse.” We heard this a lot back then and started hearing it again once my younger two brothers went through the grind and had similar misfortune. But here’s the thing… MACK CREATED HIS OWN GOOD FORTUNE!!! There could be a half second on the clock in which he appeared dead in the water, but he wasn’t because he was Mack Reiter and he had HEART.  This was displayed in the finals match he had vs. Luke Reiland. Reiland has him beat at the end of the 3rd, but Reiter gritted it out and tied it up right at the end and then proceeded to win in OT. He won several matches like this on the state and national scene. I saw it over and over again. Happened to my bro when those two met in the AAU state tourney as 8th graders… Justin was up and Mack put him to his back with like 2-3 seconds left in the match and beat him… that was the first time I saw it. I saw him win matches with that huge heart of his several times. One of the worst takes I ever had back then was that I didn’t think he would pan out at the D1 level. That was awful of me to say…disrespectful and I’m glad that he proved me wrong. People have been hooking me up with all kinds of cool videos from back then and I saw a couple Reiter-Justin matches as well as a Reiter-Davila match and I sat there thinking, “how cloudy was my judgment? That kid was obviously going to do big things.” And he did… and it should have been surprising to nobody. I am glad I got over this petty, biased way of looking at things by the time my youngest two brothers were in high school because it wasn’t cool of me.

* Reiter and Davila had two matches at state. One was that year. That’s not the more popular one, but it happened. This one happened right in front of me. Reiter beat Davila badly… like teched him in this match. I couldn’t believe it for the last time I had seen Davila, he steamrolled his way through AAU where he dominated guys like Patrick Allibone, Dominick Moyer and Mario Galanakis. I thought he was close to unbeatable. Mack killed him in this match. A year later, Davila was up 6-2 against Mack when Mack cradled and pinned him. I don’t know if Vets ever had a louder moment.

* Kyle Wellington, a very good HWT who wrestled for LM and Underwood described Davila as one of the best ever 103 lbers in the history of Iowa high school wrestling. He knows his stuff too, so there’s that.

* Mack beat Bender in the finals the following year.

* Kalina was one of the best wrestlers, pound for pound, class for class at the time. He was a Tulsa National Champ and beat several guys who went on to do well at the national level in college. He was freaking good. Fun to watch too. Mack took, I think 2 losses in his HS career. Maybe 3, but I think 2. One was to Brady Dolan from Independence, the other was to Kalina. Kalina also beat Dan LeClere… another 4 timer… with that said, Kalina defeated two 4 timers in his HS career.

* Reiland won the 1A 135 lb title 2 years later… placed 4 the the year after this. Great wrestler.