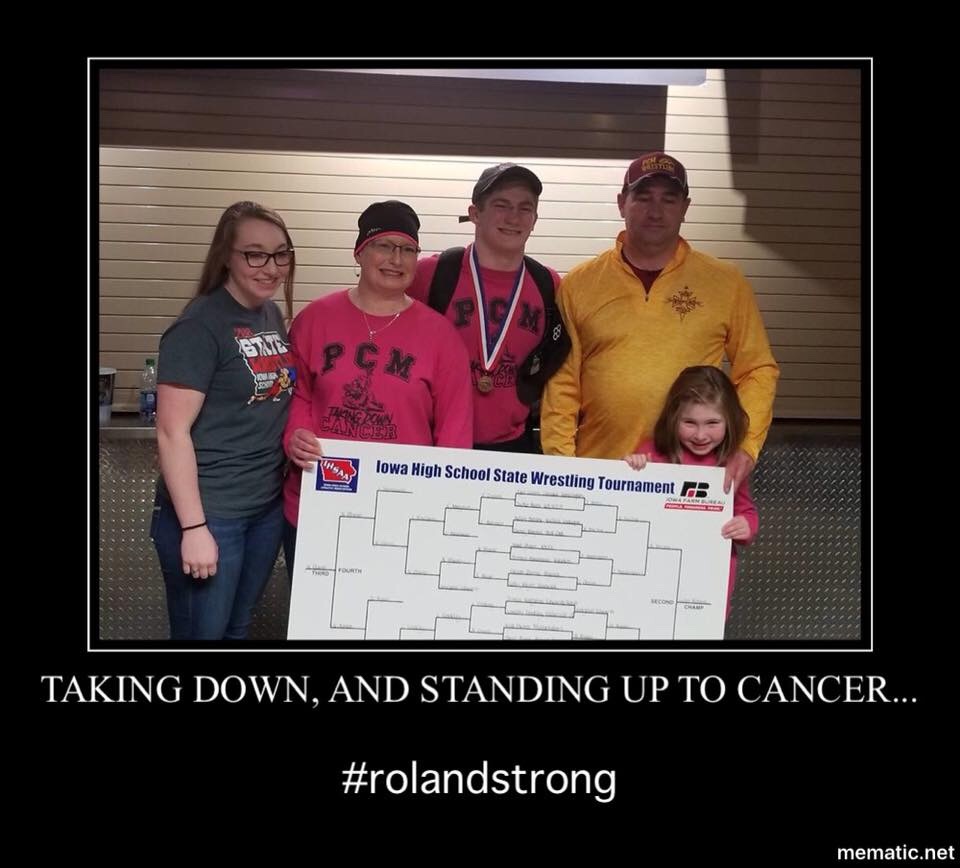 I’ve known Dan for a long time. He is a very well-liked and well-respected member of the wrestling community…and for good reason. The man will do anything to help anyone, he works hard, he’s friendly, he’s pulled his family through tons off adversity and he’s full of positive insight and wisdom. In my years of covering wrestling, I’ve had my moments where I’ve behaved…kind of spazzy and impulsive.  If I ever get the feeling that I need to keep myself in check, I will ask for Dan’s thoughts and he will tell me the truth without ripping me to shreds, for he is a good resource if I’m ever in need of a voice of reason. He is yet another great example of who and how a wrestling dad should be.

My son Lucas is the only one in the family that has wrestled. He was a four time state place winner and 2018 2A-170 state champion. He is currently a freshman on the team at Northern Iowa.

I ran track and played basketball. Everything I know about wrestling is from taking Lucas to practices, camps and tournaments. It has very much been a trial and error process.

What got you and your son into the sport?

He came home from school in 1st grade with a flyer and wanted to try it. I figured it would last a couple weeks at most, but a friend of mine from worked helped with the Grinnell youth club at the time and really helped get him started.

Obviously his state championship was a big thing. He was the first state champion from his high school and to accomplish it while his mother was going through chemotherapy for breast cancer took a great deal of focus.

Personally, I am more proud that he is a four time state place winner and each year “finished odd” at the state tournament. With everything these kids put into the sport to try to accomplish their goals it can be crushing when you lose a match at state and realize you aren’t going to accomplish that goal of being a state champion. To battle back after that kind of adversity, make the podium and win that last match when everyone is tired and beat up shows an unbelievable amount of character.

I don’t think he would be as successful in all the other aspects of his life if he hadn’t wrestled. It taught him time management, doing homework on his way to and from practice. It taught him success comes from being dedicated to the daily grind, not any quick fix. Both his high school and his travel teams taught him to support others while winning and losing as a group. I think most people view wrestling as an individual sport, but some of the loudest cheers I’ve seen have been for that overmatched kid that fought his butt off to not get pinned and save the team some points.

What do you have to say about the PCM wrestling program?

PCM’s program, school and the whole community are unbelievably supportive of their athletes. We have made friends that will be a part of our life forever. 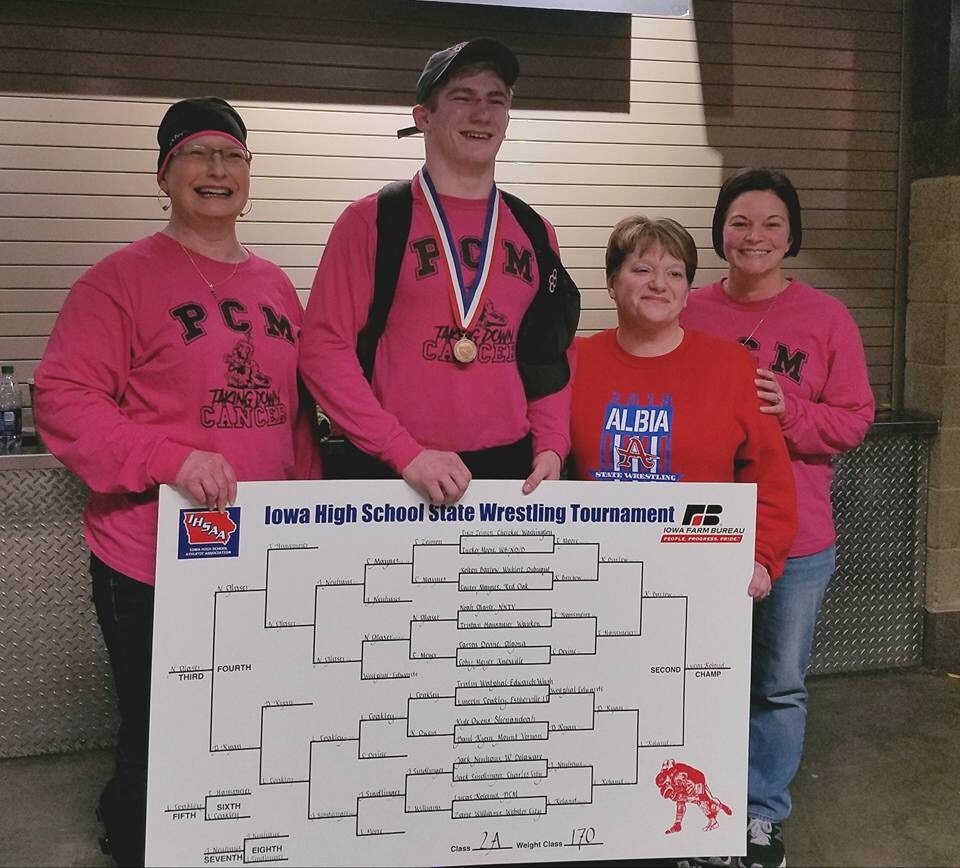 One of the first was Laurie Abernathy with Iowa AAU. She got Luke a fill-in spot on a Team Iowa trip to Tennessee that he really wasn’t ready for but we met so many people and he made so many friends that were a part of his later success. She always says he is her ugly duckling that blossomed into a swan.

He’s had many club coaches that contributed to his success. Some helped his technique, some made him tougher, some helped him mentally but they are all part of the package. Coach Teeter at PCM helped guide him through that high school transition from a kid to a man. For that we will be forever thankful.

Personally, besides the PCM community, just the families that became a part of lives have changed us forever. The Reeves and Pickerell families in Albia especially have become a second family to us, along with more travel club families than I could list without leaving out many.

When did you notice your sons stepping it up a level in their wrestling game?

Luke was the chunky kid growing up and he was frequently overmatched physically. To be competitive he had to learn to wrestle smart and improve his technique. Between 3rd grade and 6th grade he grew 6 inches but only gained about ten pounds, which started to narrow the physical gap. Then in high school he started lifting weights and had a second body transformation allowed him to jump levels.

Was it a gradual or immediate process?

It was always a gradual thing. I think especially coming from a family that wasn’t a “wrestling family” that there has been so much for him to learn and is still learning.

Besides wrestling my daughters have both done gymnastics. We also travel around the Midwest racing standardbred race horses.

For as tough a sport as wrestling is it’s actually pretty simple. A good friend taught me early on that it’s all about finding your weaknesses, working to eliminate them and then do it all over again. The kids that plateau are the ones that focus only on winning and losing, especially in practice. Practice has to be about skill improvement, but frequently most matches are better off being treated as an extension of practice. 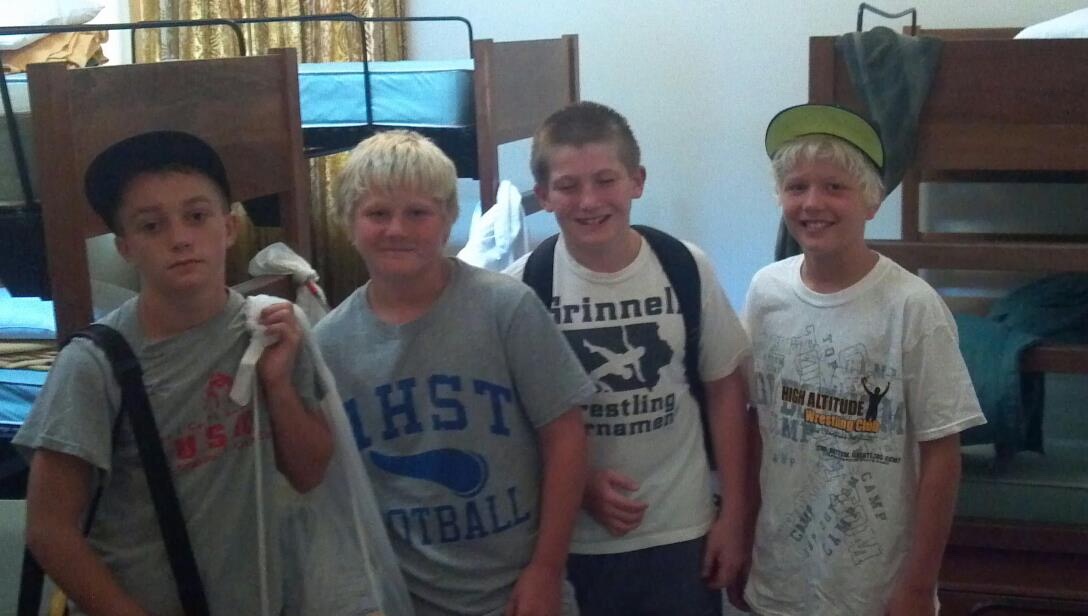