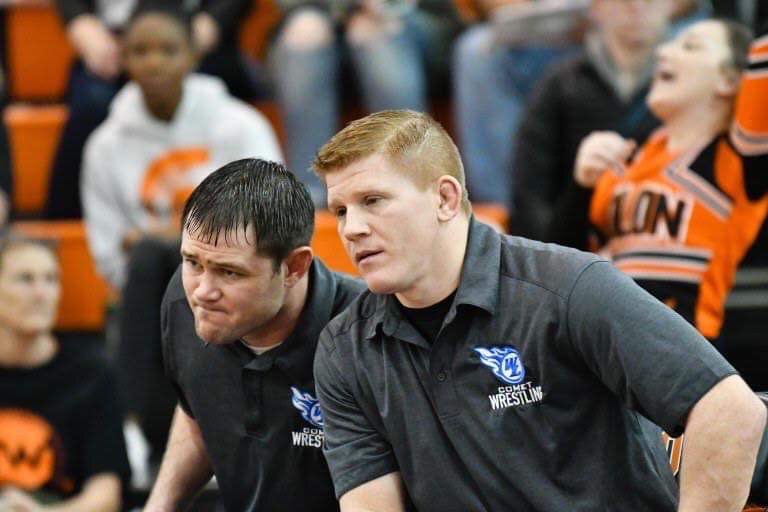 My dad got me out real early, around 1st grade. I wrestled for Iowa City West until my Junior hear in High School, then transfered to West Liberty.

My dad wreslted in high school and my sons wrestle currently. I have a 10 and 3 year old.

I was awful growing up. I don’t think I won a match until I was in 4th grade and it was probably a 3 man bracket. It didn’t start to click for me until Freshman year in High School. When I was in 8th grade Pablo Ubasa was coaching Northwest Junior High (Coralville) and he had Dan Gable came and spoke to us in the locker room before a meet. That moment changed everything for me. I’m not sure why, but from then on I was real serious about the sport.

I have no idea. Freshman year I wrestled JV all year under a talented 112lber at West. Sophomore year I broke the line up for half of the year and finished 3rd at 3A Districts behind Cory Connell (City High Coach and State Champion). I transferred to West Liberty after a move and placed 6th at the state tournament as a Junior. My Senior year I lost 5 times and didn’t make the tournament.

I cut way too much weight my Freshman year trying to make 112 for JV. It made no sense and still don’t know why I did it. I don’t think I ever lost though….

Quick twitch, reactionary. I’m a little unorthodox in the sense I don’t use much set-ups. I like to shoot from my opponents’ ties. I love ducks, carries and the knee pull HC. I didn’t start working set-ups until college.

Morgan Depringer and Mark Reiland. I still talk to Morgan today, he is the reason I coach today. Most everyone that is serious about the sport has a coach they feel is like family and Morgan is no exception. He still coaches for City high currently.

We qualified 7 or 8 both years I was at West Liberty. We came up short of the State Duals. WL usually gets a hammer of a team for Regional Duals. I think we had Assumption both of those years and they were very tough. I think we finished top 10 at traditional state.

My Senior year against the returning state champion from Assumption, Trevor Arbegast at a dual tournament. Completely devastating. It came down to tie breakers and I got rode out.

After High School I had D1 aspirations so I walked on to UNI. Looking back I really should have went to a smaller school. I think it would have been a better fit for me. Coe was really recruiting me hard and their coach is a WL alum.

Placing in the state tournament. Coaching and helping kids achieve their goals.

High school: Keokuk, Josh Rose – he beat me my Sophomore year at districts and I went on to wrestle him three more times my Junior year. Never lost to him again. Mediapolis, Aaron Drain. I didn’t expect how good he was going to be when he beat me my Senior year at Sectionals. He beat me again at Districts and kept me from the state tournament. Assumption – Terry Vesey (SP?), and Trevor Arbegast. I wrestled Vesey a few times and was impressed with his natural talent. I don’t think he had been wrestling very long and he won the state tournament. Arbegast beat me in a dual earlier in my senior year. I saw him again during a wrestle back at Districts and beat him.

Your Senior year district bracket was honestly the toughest district I’ve ever seen. There was you (returning placer), Arbegast (returning champ), Drain (3X qualifier) and Grell (returning placer) all in the same bracket and all of you were Seniors and frankly, it was sad that 2 of the state’s best guys had to stay home, for all of you would have done damage at state. I felt awful for you guys as did about anyone with a heart. How stressful was that entire situation for you guys?

Honestly, it wasn’t stressful until Drain beat me at Sectionals. I didn’t know or no one told me he was so good. I think he majored me. Going into Districts I had little doubt about qualifying. After sectionals, I obviously knew Drain had his kelly/outside firemans so I trained the whole week with several coaches trying to avoid that. After I beat Arbegast in the first round wrestle back I had to beat Drain for true second. Just before the match I went up to the Assumption room and worked with two coaches on the Kelly. During our match I don’t believe I ever got caught in a Kelly, but he ended up beating me in a very close match. I watched the state tournament finals on a TV in Des Moines. It was difficult, but I new realize how good everyone was. I’m proud to be apart of it. That experience is in the back of my head when I coach and try to help kids as much as possible when state tournament qualification starts.

I did freestyle and traveled to a few national tournaments. Josh Watts seemed to follow me and ruin it for me….Just kidding, Josh and I were teamates at UNI.

Football, Baseball. I tried track but they had me jumping over hurdles…I’m 5’5, man.

What other hobbies are there? I guess I hunt, but still learning.

I owe a great deal to this sport. It has taught me hard work, to never give up, to learn from your mistakes, and to take initiative.

I am the head coach for West Liberty Wrestling.

Don’t ever think youre not good enough. Always remember your “why.”  If your not having fun, take a break, remember why you do it, and keep grinding.

I have competed a few times in the World Police and Fire Games. That’s about it. It’s usually held someplace far away with no internet stream so I don’t embarrass myself . 🙂

Next post: Wrestling Dad of the Day: Dan Roland