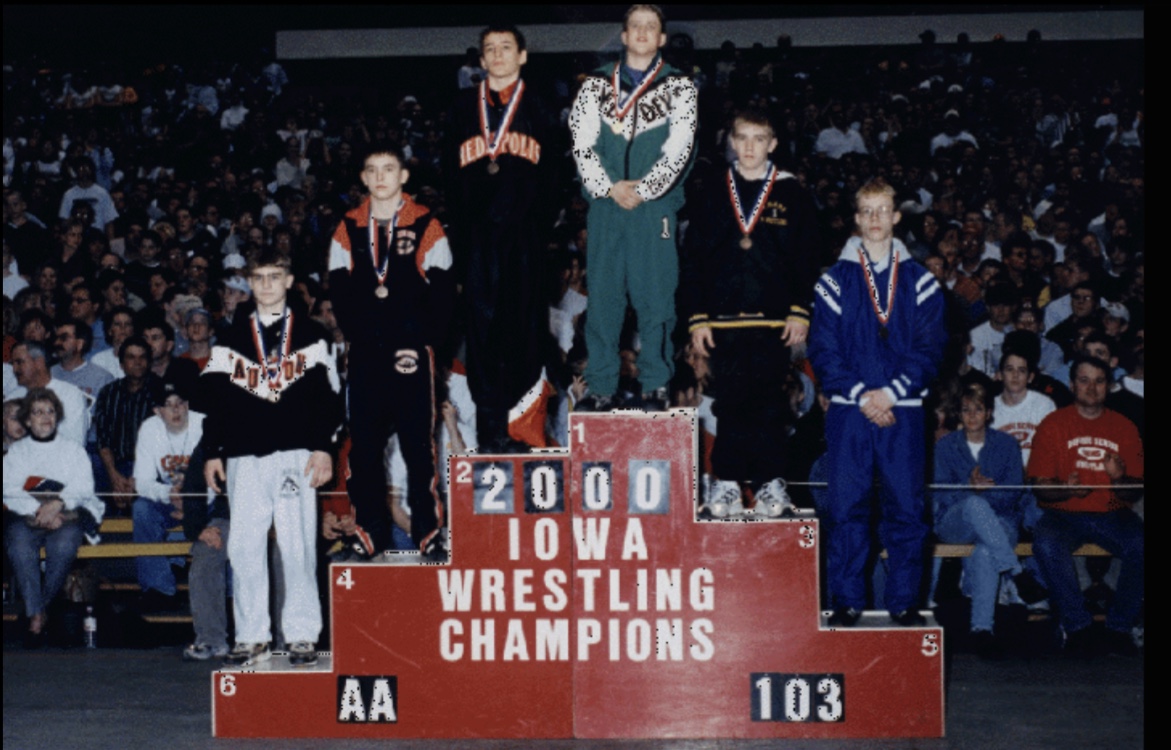 I have a lot of personal insight on this one, for #2 is my brother and I remember this bracket vividly.

* There were 4 state champs in this bracket: Pollard, Swafford, Naig and Andre Avila.

* To start, the top two ranked guys in the state didn’t place. Andre Avila from Davenport Assumption a Sophomore at the time was ranked 1st and Justin Peterson from Dewitt Central, a Junior or Senior at the time was ranked 2nd. Both placed at 2A 103 the year before and Avila was pinned on the front side by Dusty Pollard in the quarters and I THINK Peterson lost 1st round to Naig… I wanna say that Avila was beaten out in the wrestle back by a kid named Nathan Ballard from Dallas Center City Grimes and Peterson lost to Josh Blitz from Perry, I think. Avila was capable of winning state every year in HS, but didn’t quite put it together at state the way he wanted to until his Senior year, in which he did win state. He had an injury of some sort as a Junior and was in a snake-pit of a bracket as a Freshman. Glad he ended up winning one.

* Dusty Pollard put together the tournament of his life that year. He had the sea of green jumping and screaming with excitement the entire week. I can’t remember who he beat first round, but he pinned Avila in the first period in the quarterfinals. He had a crazy match in the semis against Chad Bakkum. That match came down to the very last few seconds of the 3rd period. I think he won 11-9. He pinned my brother, Justin in the last 40 seconds or so in the finals. Those two were tied 4-4 with 40 seconds when Justin took a shot and Pollard hit him with his patented cement mixer… to be honest, he shocked the hell out of us. After Justin beat Naig, we thought we were ok. Justin had wrestled Pollard one time before that and that was at a freestyle tournament the year before… Pollard, Justin and Mack Reiter were all in a bracket together. Justin weighed about 10-15 lbs less than Pollard in that tourney and more or less was able to do what he wanted against him.  Teched him, or won real big, I think. Pollard did show flashes of being incredibly dangerous in that match, but we thought we would be ok… Not that we didn’t have respect for Pollard…we most certainly thought he was a great wrestler, it’s just that we thought we matched up well against him at the time and boy did he wake us up. Pollard went out and had a real respectable season and then had a monster state tournament… we were shell-shocked after that match. We all had a hard time getting over that one. Justin hated to lose…hated, hated, hated to lose… and it didn’t happen often. Pollard went on to place as a Junior and Senior. He was a helluva wrestler… exciting to watch if you aren’t the opposition and could always pull off the big move.

* We thought Justin had a good draw coming in for the most part, but didn’t know the guys he was going to have in his quarters. He pinned a kid named Nate Evans from Estherville first round. Then he had a kid named Levi Heinold from Clarinda. Justin won that one 7-4 and had to fight his ass off for every point he scored for Heinold was scrappy as hell. We knew the Naig kid (Jacob) was really good and funky as hell from watching him at AAU the year before and knew that we would have our hands full if they met in the semis…which did indeed happen. Justin won a wild one, 6-4 against Naig which was the beginning of one of many of Justin’s little rivalries that are pretty well remembered to this day. They met that year in the semis and once in Freestyle following their Sophomore year, but Naig won a big one, in the state finals when they were Sophomores in yet another crazy match that came down to the last 5 seconds. Justin had some rivalries that went back and forth against Naig, Mack Reiter from Bosco (first met at a freestyle tourney, only met twice in Folkstyle at AAU, but the offseason/Freestyle is where they met the most and went back and forth all the way until the last time they met up as Seniors), Andre Avila, CJ Ettelson (in HS, they only met in Freestyle and went back and forth), Pollard, Ruben Chavez from West Liberty, Ryan Morningstar from Lisbon, etc. But the rivalry that is most associated with Justin is undoubtedly the one he had with Moza Fay from Anamosa and I’m sure we will get to that someday…

* Jacob Naig is the first person we did a “Remember the Wrestler” for and you can read that by clicking here. There is no one on earth who wrestled like him and he perfected his style to the point where he is one of the best that I have seen go through the state, really. One of my favorites and like Pollard, exciting to watch if you aren’t the opposition.

* Eli Kilburg was a kid we didn’t know coming in and we didn’t see him again until he and Justin were both Seniors in which they were on the award stand together again. I’m pretty sure Kilburg and Justin became friends at UNI.

* Josh Blitz is a guy I didn’t and still don’t know much about, but I saw him wrestle 1-2 matches and he was real solid.

* Chad Bakkum only placed one time, but honest to God, he was good enough to win it. It just didn’t  happen. The talent and ability was most certainly there though. That kid was a hammer on the AAU circuit for years leading up to high school. Always up there with everyone. Great wrestler and great dude. We’ve been in a Fantasy Wrestling League for a couple years now. Talk about a guy who loves the sport and knows his stuff!