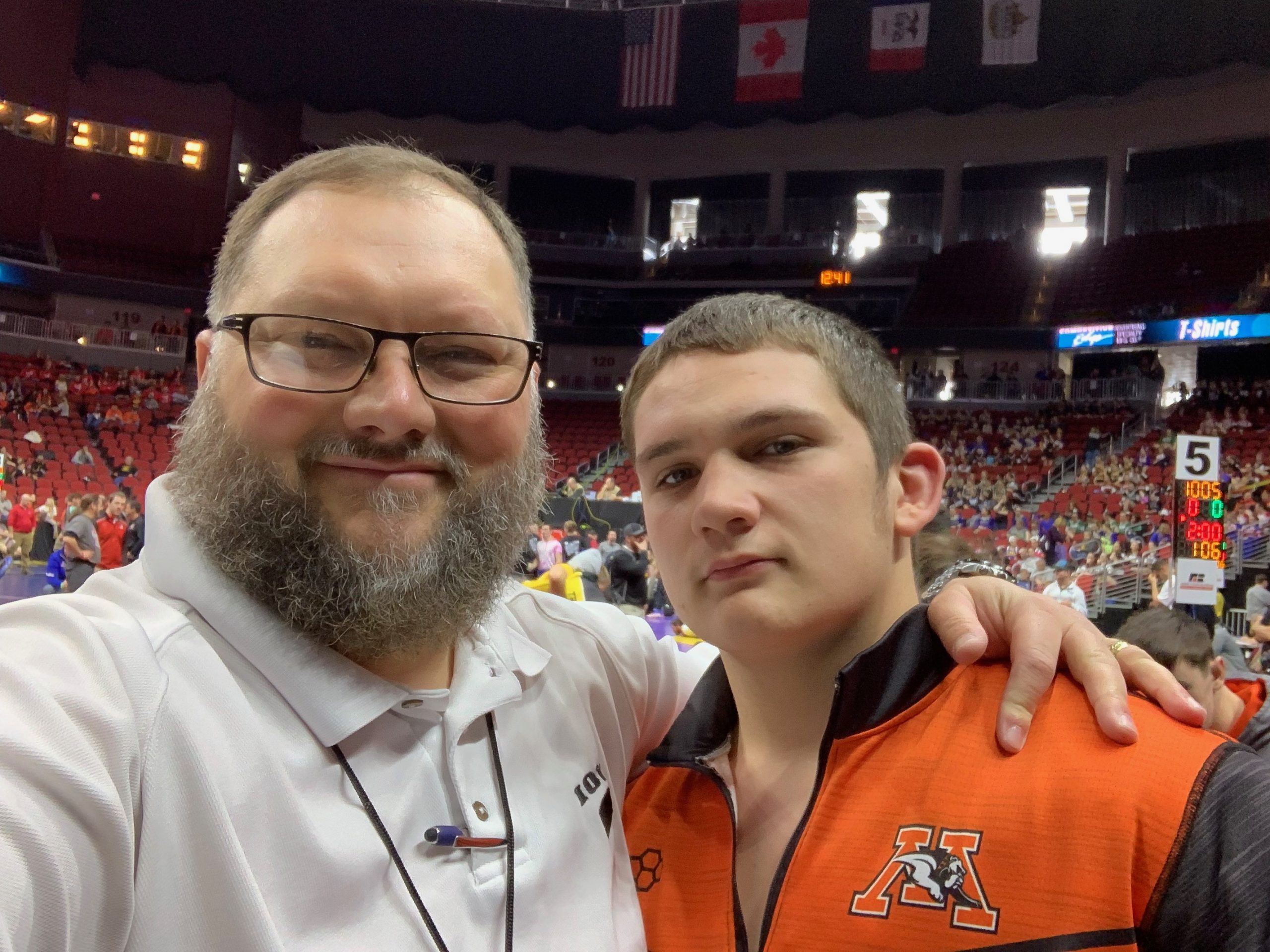 Bill has been doing great things for us with his wrestling photography and steaming events on The Pin Doctors Facebook page. Things seem to be going pretty good with the site so far and a ton of this is because of Bill, not only because of the work that he has put in himself, but with him being “all in” from the very beginning, it has made it so much easier for me to stay motivated to get something going and to keep it going. Great dude with a great family with a son who is doing great things on the mat for a great wrestling program (Mepo).

My son Keegan  has wrestled since he was in preschool.

How have they done in the sport?

He has done well even making a state appearance last year and his goal is podium this year.

Unfortunately no I did not wrestle because I was extremely active in track & baseball.

How do you think you would have done?

I like to think that I would have done well, but my guess is i wouldn’t have been anywhere near as talented as my son.

My wife’s side of the family are big into wrestling. It was my two brother in-laws Reese & Denzil Strickland that had me get Keegan into it.

I don’t usually get nervous very often because I have always told him that win or lose, as long as when he steps on the mat that he gives %110 he could NEVER disappoint me!

I have two, first is when Keegan had to wrestle a kid that was out for his first year and he was told that the kid only went out because he was tired of being bullied and wanted to learn to stand up for himself and build his self confidence. The young man hadn’t won a match yet and it was nearing the end of the year so Keegan wrestled with the kid for three periods then let him pin him. The smile on the other boys face made it all worth it! The second was getting a picture together last year down on the mats at state!

Absolutely! It has made him an all around better athlete, student & most of all a better person! It has taught him discipline, drive & focus!

Hands down Mark Swafford! Best youth coach in the state in my opinion! He has a true love of the sport & the kids he coaches! Keegan has been lucky enough to have him as a coach from the time he started and even now that he’s a senior, he looks up to Mark like a father figure.

When did you notice your sons stepping it up a level in their wrestling game?

Junior year. He went from the chubby unfocused kid to a machine on the mat. He’s not flashy, more of a meat potatoes wrestler & even though it’s not pretty sometimes, he gets the job done!

Was it a gradual or immediate process?

Definitely a gradual. Keegan was always a bit of a rebellious kid and it wasn’t until freshman year that he understood my reasoning in pushing him so hard. Without wrestling he wouldn’t be the man he is today.

Yes I was in track from 6th grade on and also played little league as well as high school baseball.

Photography! I love being able to capture milliseconds in time and freezing them for people to see! I am also an avid pool player, having won Iowa state masters four times and three times runner up. I have also placed 9th in the world amateur tourney in Vegas twice!

I can’t really answer that. I mean to be honest I have been blessed with two smart & athletic kids. My daughter is a national dance champion and instructor as well as a collegiate volleyball player at Iowa Wesleyan. My son has excelled in everything he starts and puts his mind too, including wrestling, trap & billiards. My wife is my rock and holds this family together thru thick and thin and I’ll never forget our wedding day. So for me my whole life has been a blessing from God and I can’t really rank anything better than another.

Have fun! Cherish your kids and encourage their love of the sport. Don’t make it about winning and losing, because at the end of the day all they want is your undying love, attention and approval.