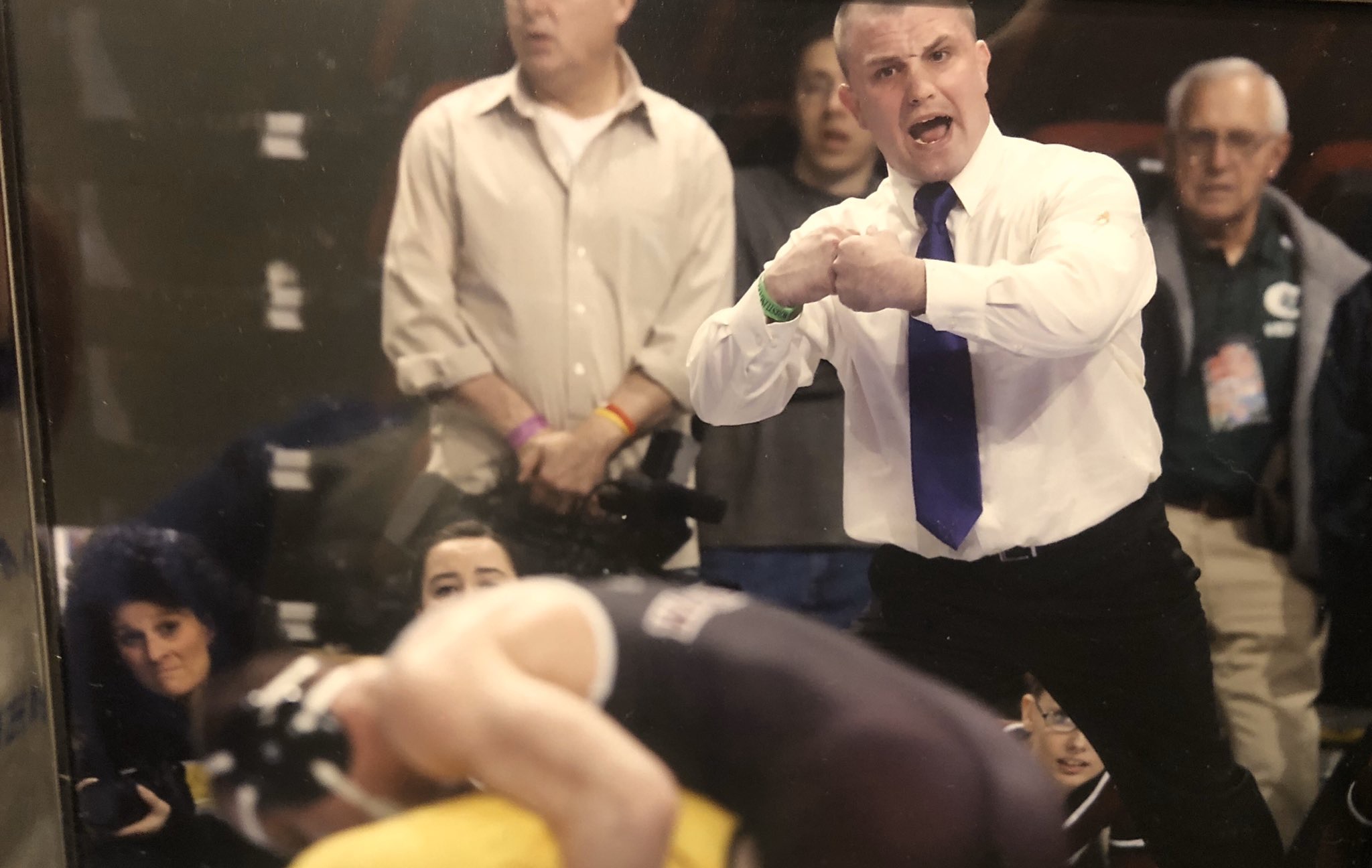 There was an announcement at the end of the day when I was in 4th grade. It was about wrestling. At this time I didn’t know anything about it or really ever watched it. However, Bubba Schoonover coached my flag football team. I used a swim move that helped beat my defender everytime. For some reason he said how I played D-line indicated that I better go out for wrestling. So I did.

My dad wrestled a little in high school, but nothing serious. I was the first in my family to do it. My brother followed suit along with a few of my cousins. My brother was a 2 time state qualifier at Waterloo Columbus.

I didn’t really wrestle competitively until 6th grade. I was a 2 time AAU state champion. If I had a rival it was probably anyone from Bosco I wrestled, but I actually liked all those guys. Their fans made it more of a rivalry. If they would have just been quiet, I probably would have never gotten so riled up and they may have beaten me once or twice (great fans). Still remember Kettman yelling once “he’s tired!” during one of my matches… That was pretty much the worst thing he could have ever said for his kid at the time. I sure as hell wasn’t tired… I think it was the first period?

At the time I hated everyone from Waterloo West. Brett Blasberg and Drew Waskat were rivals I would say. However, after high school, I have been in company with both of them and they are pretty nice guys. In high school even if a girl from our school hung out with them, I wouldn’t talk to the girl for probably a month.

There are quite a few, but one of the hardest was wrestling my matches while my shoulder was constantly out of place my entire Junior year. I only had about 20 matches going into the state tournament that year. I lost the first round because I wasn’t better in that moment. However, our team had a chance to win the title. Coaches talked to me in the hotel and explained the situation. I decided it wasn’t about me anymore and my shoulder wasn’t going to heal by miracle. I caught fire and racked up bonus points in every single wrestleback. Including avenging my first round loss by major decision. A lot of stories inside those 3 days. Maybe another time.

The other time I would say would be my Senior year when I lost in the semis. I started the second period down 3-8 and lost 12-14 with my opponent on his back. Once again I wasn’t better in the moment and I ran out of time. I probably could have cashed it in, but my coaches installed a mentality in me to keep fighting every match. I’m not sure how I got 3rd that year, because I was crushed.

Snaps and front headlocks until my opponent is tired and they want to be pinned.

Has to be Chris Ortner. This guy did a lot for me and became a lot more than a coach in my life. He was even back at my wedding 5 years ago. My coaching style of wrestling is still a lot of what he taught me. Attack

What was the most heartbroken you ever felt after a loss?

Losing my senior year in the semis was the toughest. How I was able to win my next two matches had to be something in me that I didn’t know what existed.

Won state in wrestling 2004. Got 5th as a team in D3 nationals under Mark Schwab.

This is tough because I didn’t really grow up with my family watching wrestling. I would say that I always wanted to be like Mack Reiter because he had all the state titles. I also always wanted to wrestle for Brands and actually thought about going to Chattanooga even though I don’t think he knew anything about me.

My CCA wrestlers I coach. Anybody who is willing to work their tails off for me is my favorite. If I had to pick a wrestler not in our program it would have to be David Taylor, because I did play black jack with him once while Brett Wheelan talked to him. Pretty nice guy for putting up with Brett.

I wouldn’t worry about all the fun outside of wrestling. I would have spent more time building better habits instead of feeling like I was missing out on the typical high school experience. Easy to say that now at 33 years old, but it wasn’t worth it and I still think that is why I never won a title. I wasn’t doing all the little things.

I played football, but I did freestyle and Fargo all 4 years in high school. I always tried to find time to wrestle.

Football (Freshman-Junior year. My Senior year, I was still recovering from shoulder surgery. I played baseball (Freshman year), and golf (Senior year Jv 6 spot for one tournament). I was terrible.

I coach wrestling. I’m still in the army reserves

I don’t really make excuses because they don’t really get me anything…. unless my wife is talking to me about how to fold correctly, where to put my shoes, etc… Then I have excuses.

I also enjoy working hard and putting in extra time on different jobs.

I am a 6th grade science teacher at CCA and I coach wrestling. I am also in the army reserves as a medic.

If you can get better by just 1% everyday then it’s worth the work.

Never really thought about it.

Brad Smith, Chris Ortner, Mark Schwab, Brett Wheelan, Jeff Bradley, Zach Weiglien, Drew Kelly. All of these guys took a chance on me at some point in regards to wrestling.