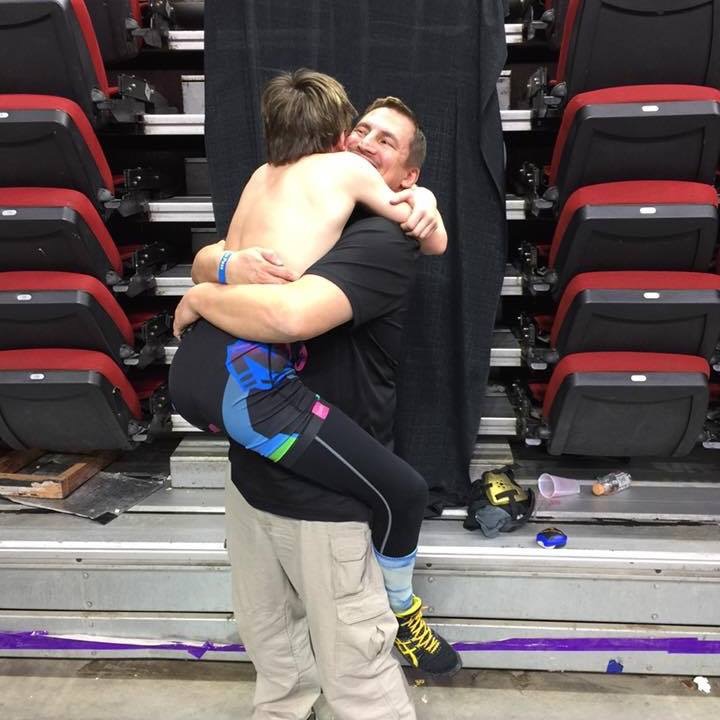 Dan Magayna is a nice dude with a real big heart and it shows here. Make sure to tune into his podcast if you can: Shake Hands Wrestling Podcast

Both my sons have wrestled. Eric Loftus wrestled until HS but he was never an athlete and was not living with me except for every other weekend. Max Magayna is a pretty good wrestler whose mom lets me take him wherever he needs to go for his development. I would use wrestling as a way to get to spend more time with my son during the week and every weekend since his mother and I divorced when he was around 5.

I wrestled for the Upper Iowa Peacocks. Not having a father, I was asked by a coach if I wanted to try wrestling in Clear Lake Iowa. My brother and I wrestled and rough-housed all the time, so I was a natural at it and very small for my age which can be a benefit in wrestling. I stayed in it because my coaches gave me the feeling of having a father and I didn’t want to let them down.

I always knew I wanted my kids to try wrestling. My oldest was average with some natural talent but did not want to work at it and his mother thought sports were unnecessary and took to much time. My youngest was able to have all the time to hangout at my club practices when I coached,and he was a natural with aggression. He just would wrestle anyone in the room. So I just kept feeding the beast as they say.

My sons’ matches get my guts in a knot. The only time I remember getting those kinds of nerves was when I was cage fighting and my brother would be going against someone tough. I didn’t get that nervous for my fights, but I sure did for his.

Any moments that stick out to you as the most memorable or exciting?

Of course winning some of his state and national titles were pretty exciting. But watching his growth and his continuing desire to get better is pretty sweet daily. A couple of proud moments stick out to me. I got choked up when he won outstanding wrestler on our dual team and asked if he could give it to the kid on the team that fought hard all weekend but didn’t win a match. I also got proud dad tears when he was interviewed after winning one of his state titles. The number of proud moments have been so many that I couldn’t pay anything to find that much happiness.

This sport is invaluable to who my son has become. Wrestling shaped me and it is shaping my son into a fine young man. Wrestling is like a giant gift to character development.

What do you have to say about the clubs Max has been part of?

He started with the Wolves in Evansdale which I still recommend as a great club to get your feet wet and learn to love wrestling. Our first elite club we were part of was the trophy hunters, a sort of elite competition type club. Chris Krueger headed that and really pushed my son to do battle. Today we mainly just train with the school Columbus Catholic that I coach at and at UNI with the Immortal Athletic Wrestling Club. I love to watch practices at IAWC because the coaches there have top notch technique and are really good at making sure the love of wrestling stays strong in the wrestlers. Being a dad coach I think it is very important that you let other coaches work with your kid. It can offer a different flavor of technique and ways of explaining things. No one person knows it all, and I think he has come to value me and what I bring to the table more when he hears others say some of the same things I preach,as well as realizing I have a special set of skills in coaching that comes from my personal experiences in wrestling and life. I couldn’t be more happy with all of the opportunities and clubs we have gotten to be a part of. Not to mention the Iron Sharpens Iron camps and a few others we attend in the offseason. ISI has really helped my son love wrestling and embrace offseason wrestling. It has given him a chance to wrestle with so many levels and abilities of kids at a variety of age ranges.

Steve Ferrell has done a great job understanding what camps should be about and what they really do for kids. He has given not just my son but so many kids a chance to fall in love with and enjoy wrestling.

Brian Keck, a friend of mine and a guy I worked with, gave my son some great tournaments in Iowa that helped my son realize he could wrestle with the best of the best. Tragically we lost Brian just a couple of weeks ago to a heart attack.

My coaches were the reason I coached and why I coach the way I do. Guys like the coach who took me to my first tournament ever, Mr. Dewald at West Intermediate, and his assistant who taught me to leg ride. My high school coach Steve Knipp who was pretty funny guy but really instilled some wrestling fundamentals. My college coach Mike McCready who developed so many wrestlers from my time there that many of them have become and still are coaches at high school and college levels. Also, he was the calmest giant man I ever met. Even the short time I knew Willie Gadson who mentored me on how to raise a wrestler when he would tell me stories of him and Kyven. Now my son has people like Cruse, Joey Lazor and Jacob Hodge helping mold him so I can just be dad sometimes and not always try and be coach.

Max was placing at Super PeeWee as a PreK kid in with Kindergarten kids like Hunter Garvin and the Martinsen brothers in his bracket. He has always been really good. Each year he would surprise me by beating someone who was supposed to be better than him. This year he sees all his buddies in high school and I think over the summer he got a new higher level of desire to be the best he could be. He felt like one of the directors at a camp was not being fair to him so he just stepped his game up and wasn’t going to let someone else decide his fate. He just kept working harder and harder and decided he was going to want it more than ever. I guess that guy did me a favor. Max has not let off the gas since then. He wants to win state titles and he believes more than ever he is going to wrestle Division 1 someday. He just believes it and that is strong when you believe in yourself the way he does.

What is he ranked in the nation?

Last poll I saw in Middle School by Willie Saylor on Rufkin Max jumped from 57th on Flo p4p to 31st on Rufkin I think. Since then he has beaten at least one kid that was ranked top 20 and revenged the only 2 losses in MS he has had all year. One of those losses was 15-2 and he came back in the same day and beat that same wrestler in OT last week at VAC Duals. Along with avenging his Super 32 loss in the Finals at VAC.

I tried baseball but didn’t know I needed glasses because growing up we didn’t go to doctors or dentists unless something bad happened. I also played football but was 98lbs wet in the 10th grade so I gave up on that and focused on wrestling. My son weighed more in 7th grade than I did my sophomore year of college.

We disc golf together and go to movie marathons. We also like to try new restaurants. I would say my hobby is probably my love of wrestling and especially my sons wrestling at least until he is done with his wrestling career.

There is nothing like watching my son wrestle. It is so obvious to anyone around me that he is my passion. Just seeing someone that is so close to you work so hard and to know that it has been such a huge part of our bonding makes me smile ear to ear. Our wrestling trips are better than any official vacation that other people take. When he talks to his wrestling friends and they are laughing and having a good time it is like I am watching a Hallmark movie that brings tears to your eyes.

Do you have a lot of fun with the podcast?

I do enjoy doing the podcast but I enjoy it more because I know how I felt watching someone interview my son. I also know how it made him feel getting some kind of recognition. I enjoy knowing that those people I interview may get some of that same joy and/or motivation from being on my podcast or seeing their kid/friend interviewed. I also know how time flies so fast and I am able to freeze time just a little and someday people can go back and see a piece of that history.

I always say it is a roller coaster. No matter the level of your wrestler they will have days, practices, maybe even weeks, months or a year of good and bad wrestling. Just ride it out. Don’t get tunnel vision to the point you don’t see the hill, valleys, and turns along the way. They will forget everything they just learned and then pull it out a year later like they have been practicing it their entire lifetime. Make sure you challenge them and be ok with them taking losses if they are having fun. Max has had his biggest jumps when I put him in the deepest water and he comes back like Michael Phelps. Keep the focus long term and make the journey the joy not just the championships. 26 state and 54 national titles just means we have had hundreds of awesome vacations. We just happen to bring home some nice souvenirs along the way. The real test is will he have his kids wrestle someday? If so then I will know I did well. 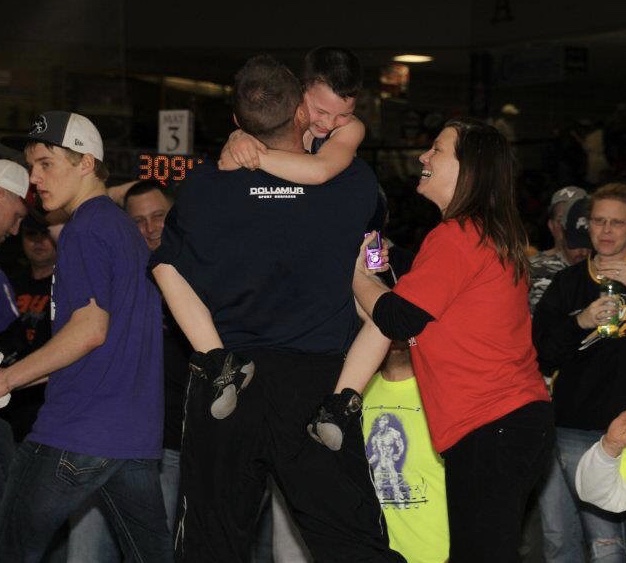