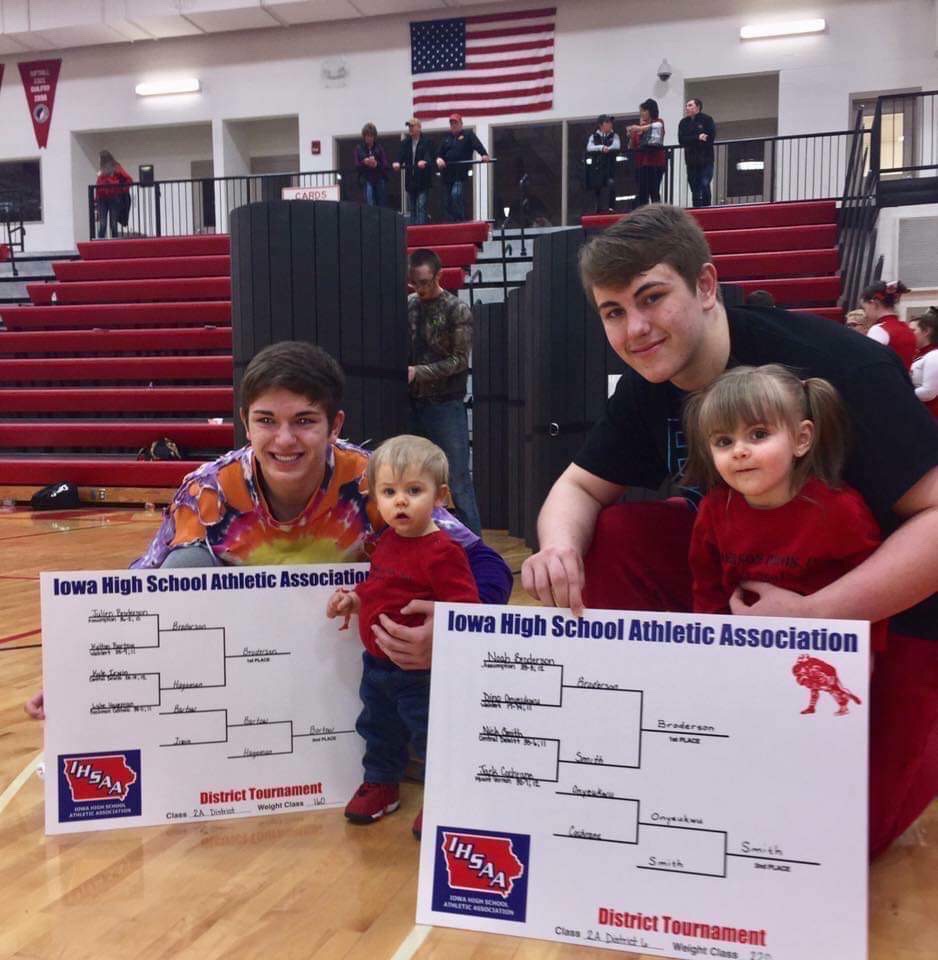 The wrestling community as a whole may have their differences, disagreements, spats, biases, etc. However, one thing that I think everybody who has been part of the wrestling community for the past 15+ years can all agree on is this: You will never meet a nicer person than David Broderson.  And the guy just loves watching his sons and daughter do work on the wrestling mat…I’ve really never seen anyone who has been happier from it.  Great dude…great family.

My sons Noah and Julien have wrestled since 2004 when Noah was in kindergarten and Julien started to roll around on the mat when he was 3 years old. Noah placed every year at state except 7th and 9th grade year. Julien won several kids state titles starting in kindergarten at Iowa AAU Super Pee Wee State. That 1st year at SPW state I didn’t know what to expect, but it was a cool experience.   Noah placed 7th his Sophomore year, 3rd Junior and Senior years. The years he got 3rd place, he lost to the eventual champ by one point in the semifinals and battled back for 3rd usually by pinning his opponents in the 1st period. To this day it’s heartbreaking that he fell short of his goals, but I am very proud of how he responded the rest of the tournaments.

Julien wrestled up 2 weight classes his Freshman year. He had a good year going something like 36-12 with 20 plus pins and a conference title, but he fell short at districts, placing 3rd.He trained a lot in the off season, wait, there is no off season, haha. His Sophomore season, he faced the #4 ranked guy in his first match of the year, and won 7-0. He continued to do well and lost a match and Mount Vernon and The Battle off Waterloo. He ended up avenging one of the loses at Districts and avenging his other loss in the state finals. He went on to win state his Junior and Senior years of high school as well, becoming the 2nd ever to win 3 state titles at Assumption. The other was Josh Watts, who graduated the year Julien was born, 2001. I find the random fact pretty cool. Julien was selected for Dan Gable Wrestler of the Year for Class 2A, inducted into the National Wrestling Hall of Fame being the Bob Steenlage Iowa High School Wrestler of the Year and was named the Quad City Times Male Athlete of the Year. All of those are outstanding honors for him. He’s a very humble kid, but dad might brag a little. He is now at Iowa State Wrestling and redshirting. He off to a great start and loving the Cyclone wrestling room. He is off to a 11-2 start with 9 pins so far.

No, I was always a baseball guy growing up, I found out about wrestling in junior high, but I was told that I couldn’t do it and I never brought it up again to my mom.

Noah got a sign up letter sent home from his elementary his kindergarten year. I set it next to other paper work and actually didn’t look at it again until the day 1st practice started that year. I’m sure glad I did. It has given us a lot of memories, experiences, and we have met a lot of great people and families over the last 16 seasons.

My 4 daughter Emmalynne has been wrestling some over the past few years and our 3 year old son Gable (yes named after Dan Gable) has been going to practices this year as well.

I never wrestled, but I could never eat during tournament days or dual meet days for my boys, It wasn’t that I doubted their ability, I always have been over analytical. To this day, the will know I remember every detail of their matches since the beginning.

I could write a book on this because there are so many. One thing that really stands out to me as how they have overcame a lot of adversity over the years and how close if a brotherhood it has given them throughout life.

Definitely! Wrestling has taught them many things, the rewards of hard work, accountability, self reliance and that you get what you put into something. I have always been pretty hard on my kids, but it’s all out of love. They are even better young men off of the mat, then on.

What do you have to say about the Assumption program?

Assumption historically has been a great wrestling program with a lot of successful individuals and teams over the years.I expect the tradition to continue in the future. With the great coaches and support from parents and fans it has, it is a huge part of their success!

Baseball was my favorite sport and I played into my early 20’s. I also played some football and basketball and enjoyed skateboarding and BMX biking like every other boy growing up in the 80’s. Lol.

There are a ton of people that have been a positive impact, I hope I don’t forget anyone. I’ll will start with the Davenport West kids club coaches back in the day: Eric Juergens and Dan Knight in there youth. In high school, Pete Bush and Tristen DeShazer especially were very impactful along with all of the Assumption coaching staff.

When did you notice your sons steeping it up a level in their wrestling game? Was it gradual or immediate process?

Noah did his 1st tournament after doing 2 practices and got 2nd at the West Tournament when he was 5. He took to it really well, but really stepped it up starting in 3rd grade when the started at Young Guns Wrestling Club coached by Eric Juergens and started at the Bettendorf Wrestling Club the same year. Noah has always been a bigger kid, but wrestled like a little guy. He was good on his feet and on the mat. Julien has had the natural love and ability for the sport since a young age. He has a great worth ethic to always continue to grow.

Where does watching your sons wrestle rank in your favorite of all time memories of your life?

It’s certainly near the top! Watching how hard they work, and the everyday grind pay off, spending those long days on the road and in the gyms is certainly something I will cherish forever.

Don’t blink! We always think that they are going to be little forever, and we have all of the time in the world. We don’t. Enjoy the experience with your kids. One day your’re bringing them to their first practice at 4 or 5 years old, next thing you know, your’re moving them to college and might see them once a month if you’re lucky. Always be supportive but hold your kid accountable. Support the coaches and don’t make excuses for your kids.

Next post: The Total Agony and Utter Frustration of Doing the Rankings with 3A 106 as an Example