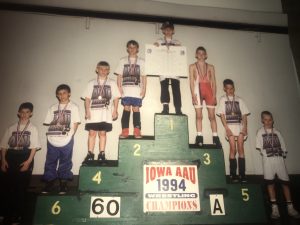 * 3 of these guys became state champs in HS…Rostermundt, Osgood and Swafford. Ironically, they were also teammates at UNI in college. Helgeson was runner-up to Mack Reiter when Reiter won his 4th… at least I THINK that’s Dan Helgeson in the pic… I know it’s a Helgeson. I’m not 100% sure how the other guys did.. I know Ziesman was pretty scrappy in HS.