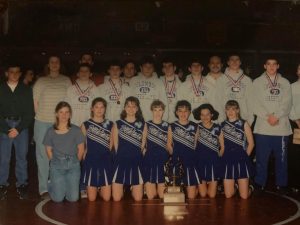 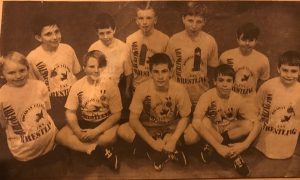 A high point for me would have to be being a part of the first 2 state championship teams for Columbus Junction. Since I never achieved an individual title myself.

The biggest adverse challenge was my senior year. I got beat at state by Daniel Klindt from Oakland, Riverside and came back to get third. The very next week we wrestled them in the State Dual Finals. I was really looking forward to a rematch, but the lineup moving wizards that Coach Plein and Siegel were…they knew even if I was to beat him we still wouldn’t win the dual the way the matches were lined up. So, they started with me and bumped up the rest of the lineup and we won the title in the last match with Jason Payne putting it on the line.

I would have to say the most upset I ever was with myself after a loss would had to have been my loss in the finals my junior year to Pat Rupp from Belle Plaine. We had wrestled 4 times that year. The first time I was winning 10-0 after the first period and got headlocked and choked unconscious. The second was at sectionals. I lost 7-3, I believe? Third was at districts and I was winning 12-4 and pinned him. In the finals I hit a nice sweep, got stretched out and he double overlooked me to my back for 4. I eventually lost that match 8-4.

You were coached by a couple legends…John Siegel and Bill Plein… how would you compare and contrast their coaching styles?

Coach Plein and Coach Siegel have been the biggest influences in my life. I went through some tough times and they never turned their back on me. I owe them everything for the man and father I am today. As far as their coaching? Very comparable. I’m not selling either short on their capabilities. But, Coach Plein has impeccable technique in his coaching. Coach Siegel teaches you how to grind and believe in yourself even when you might be outmatched.

I had 2 brothers Scott and Joe. I believe Scott was a qualifier and 3rd. Joe was 3 time qualifier placing 4th his junior year.

You coached your nephew Sawyer Farris quite a bit… what were some of the best memories of coaching him and did it prepare you to coach your own kids?

Bar none. Sitting in his corner on his way to a state title. I’m still learning myself how to approach the sport with my own son, Kane. Things I did with Sawyer don’t have the same reaction as they are with my own son. Kane is still trying to figure this sport out and is only in 5th grade. When he is older and ready to buy in all the way…we will do more.

Some of the most notable competitors were Corey Stanley’s split and Benji Winegarden from Wilton my freshman year. Eric Fitzer, Ben Thomson and Chay Wood my Junior year. I beat the rest listed.

I was just a grinder with some funk and good hips.

I didn’t wrestle collegiately after high school. Although I have always stayed involved throughout the years.

Am I remembering correctly, or did you used to dye your hair a couple times? Who inspired that? Rodman if I remember right?

I did dye my hair. Lol. I was definitely an outlaw kid that went through a pretty rough divorce with my parents and at that time Rodman was the “bad boy.”

I am married to my wife, Jamie and we have 3 kids together and I also have a stepson. Wrestling has molded me into everything I am today. It has helped me through dark times and at my highest. The older I get. The more I realize how much it’s helped. I am currently a project manager in Burlington at Industrial Service Corp. I take the same pride into my job everyday that I did 23 years ago in a wrestling room. I am still involved in wrestling. I help coach youth wrestling.

Haha. I’m old. But, I’m still dumb enough to strap the laces up if I was called out. It’s who I am and the wrestling room will always be the place I feel like I fit in. There is probably a better chance of my son rivaling it out with one of my old rivals’ kids.