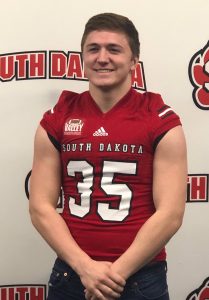 I play football, wrestle, and run track. Up to this point I’ve done pretty well with breaking the school career tackle record with 366 tackles and placing 4th last year at 195 for wrestling. Also running at state the past four years at track.

So you committed to South Dakota recently to play football. Was this a difficult decision? Will it be easy to leave wrestling behind after your Senior year?

Committing to USD was hard because I knew I’d be leaving all my other sports behind, especially wrestling. It’ll be very hard for me when I won’t be able to roll around on the mat anymore.

I looked up to Ray Lewis a lot. He was a beast football player that could lay the hammer and he wrestled in high school and won a state championship. He put his full heart into everything he did.

I would say to the kid that every sports feeds into itself and you’d better yourself more in your “main sport” if you do the other ones. Like for me wrestling gives me good body control and a mental edge that helps in every other sport and puts me that much further ahead than the people I compete against that only do 1 sport.

Wrestling gave me lots of skills for my football game. Learning to hand fight and use angles helps get off lineman in football a lot easier. A football tackle is just like a double leg so football also fed right into my wrestling abilities too.

I’ve dreamed about being in the NFL since I was a kid, it’s pretty much every football players goal.

What accolades are you most proud of from every sport.

I’d like to shoutout my football coach, Coach White. He would constantly push me to strive for something better and he is also a strong advocate for football players that do other sports. I’d also like to shoutout my dad. He made me the athlete I am today and I how everything to him.

I come from a family of athletes. Everyone in my family either played in college or plans to play in college.

I’m feeling pretty good about this football season. I’m nursing my shoulder back up to health for a bit but plan to leave it all on the mat for one final year.