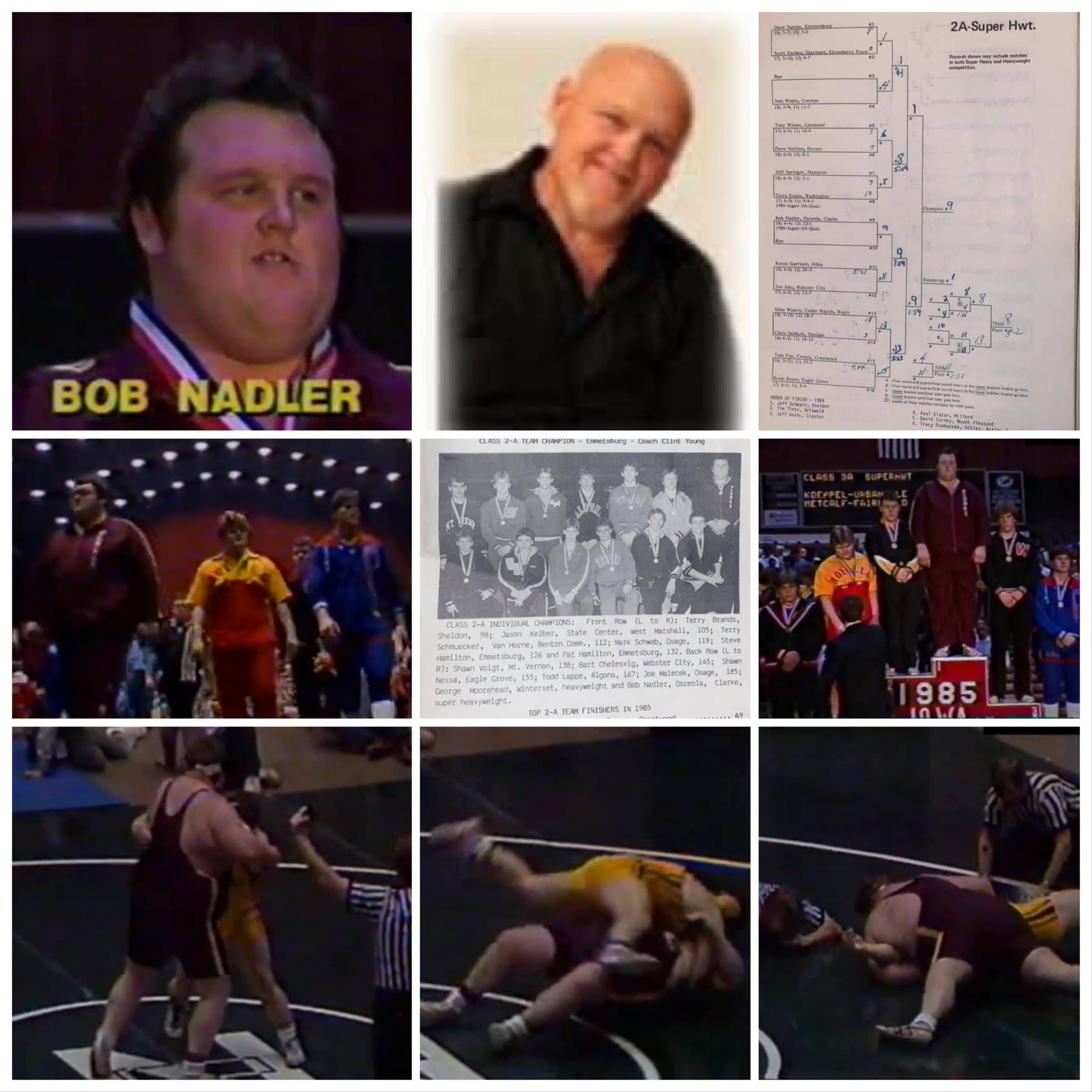 I actually wrote this one last year, but now that the following for this page is 3X the size it was when I published it as well as this story being one of my personal favorites, I wanted to re-post it with some of the tributes that people wrote about him in the comments section. The tributes will be posted towards the bottom.

One of the most amazing clips I have seen while going through all the wrestling film that I have was from the 1985 State Finals on IPTV. It was the small clip of Bob Nadler from Clarke-Osceola scoring a pin in his  2A Sup HWT Finals match. Back then, you had HWT’s which had a weight limit, but there was also a Super Heavyweight division, which was also known as the “unlimited” division…because there was no limit in how much a wrestler could weigh opposed to nowadays where 285 lbs. is the cutoff. As you’d guess, this meant the heavyweights in those days were much bigger than they are today.

The biggest Super Heavyweight that I have come across was Bob Nadler of Clarke-Osceola. He weighed 440 lbs. when he pinned Dave Saxson of Emmetsburg in the first period of the state finals. Dave Saxson was a big man himself and actually won the Super Heavyweight division the following year in 1986, but he appeared to be half Nadler’s size when he locked up with him. Nadler was a massive, strong man. And what amazes me about the match is that you see Saxson lock up with Nadler and try to trip him to his back, which he did, and since Nadler was so big all he had to do was push him up and roll him over to his back and it was over…It looked like Saxson just bounced off of him. When he locked him up and put all his weight on him, it was over. Saxson didn’t stand a chance at that point and it’s hard to think of many other guys who would.

You can watch the YouTube video of this clip at this link:

Anyways, I read that Bob Nadler actually passed away in April of 2018 at the age of 51. When he passed, a Clarke-Osceola legend passed, for that’s exactly what he was. Bob was the first Osceola student ever to win a State Championship of any kind. Thereafter, the first Monday in March was designated “Bob Nadler Day.”

After High School, Bob attended DMACC and became a diesel mechanic technician. Bob was a man of many talents. In addition to his reputation as a great mechanic, he was known for his wonderful cooking. He was also an avid gardener and in the fall he enjoyed canning the fruits of his labors with Laura.

Here are some stories that were posted by friends and family in the comments section of Bob’s article last year:

Laura Nadler (Bob’s Wife): “Thanks for the lovely tribute to Bob…He was my Gentle Giant for 27 years. I asked him once what he did to win all his matches, he told me he never had a losing attitude. He went into each match knowing he was going to win. 90% attitude 10% skill.”

Mike Bowlin: “Bob and I were friends for a long time. He went to middle school at Indianola when I did. Then moved to Osceola. We also went to the North South Dual in 85 after we both won state titles. Wish I could find those pictures it was a great time with him and Bubba. RIP old friend.”

Brian Reece (2X State Champ/HC at Clarke Osceola): “Great guy. He truly was a gentle giant. I still remember that match. I tried to model my style after our first champ.”

Doug M: “At the John J Harris tournament in Corning, they took Bob to the CO-OP to weigh him. He was a big man! The tournament was held in the old armory back then and that place was packed so full, the inside of the building would sweat. But when the super heavyweights were on the mats the floor shook and moved! RIP Bob…….. as far as I can remember he was a gentle giant

Shannon D: “Today it’s 3 years since Bob left, much too soon. Laura shared this posting. I always knew Bob was the 1st state champion for Osceola, and that he was a legend. Bob and Laura told a story about going to pick up a new puppy. On the way home the vehicle overheated and they had to call for a tow. When the tow truck driver, a younger kid, arrived he was amazed that he had “THE” Bob Nadler in his truck. And he called some of his friend ms to say “You are never going to guess who I have in my truck.” It had to have been 20ish years since Bob graduated and strangers still knew the legend. (I am thankful that I met and got to know Bob. He was a gentle giant. He got me out of situations that I wouldn’t have been able to get out of by myself. Bob and Laura have definitely been a blessing in my life. I never thought Bob would leave so soon.”

RT: “My dad was one of Bob’s instructors at MACC and said he was an outstanding Tech and human being.”

Barry S.: “I graduated in 85 and remember Bob well he was definitely a gentle giant! RIP.”

Lori S: “I grew up with wrestling, 1st going to watch my cousin, Ron McDowell then my brother Greg Kindred and then my boyfriend Donnie White. I was a wrestling cheerleader and truly loved it. I remember when the Nadlers moved to our school district and Bob quickly earned the name of “Big Bob.” He was a gentle giant except for on the wrestling mat. One of my dad’s favorite stories was to tell how the school scales weren’t enough to weigh “Big Bob” and every time he had to weigh-in, he had to go to the local Co-Op. The anticipation of waiting until the very end of the meet for Bob’s match was always great. His matches usually didn’t last for more than a few seconds. The minute Bob would set foot on the mat, the whole stands would be on their feet because they new it would be a quick victory! An Osceola legend!”