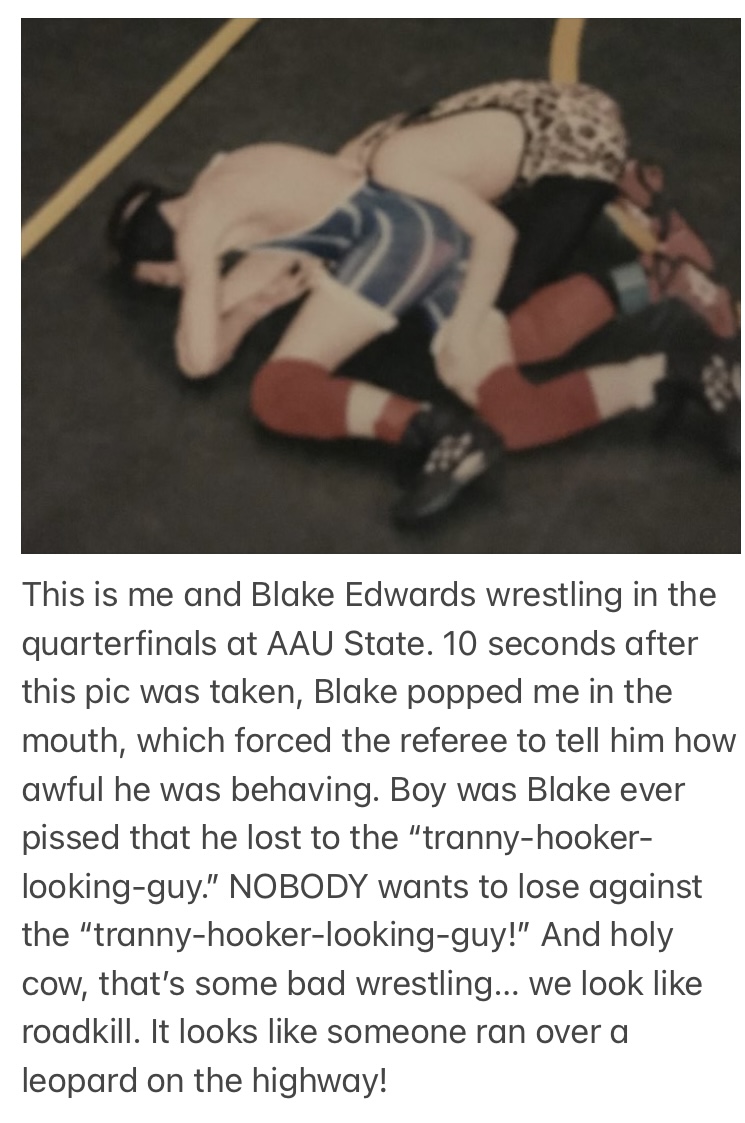 Blake Edwards was fun to have around. Even if he was popping you in the nose after your match with him ended, followed by him calling you a mouth-breathing gay slur of some sort, which happened more often than not. However, he still made things entertaining. That dude was a tough, raw nerve type of guy who hated to lose and was not afraid to elbow you in the mouth or even punch you if you ended up beating him. Before I ever wrestled him, I used to watch him compete and thought he was entertaining to watch, for not only would he brashly cheap-shot his opponents like it was a natural reaction to him, but he’d also talk some of the funniest smack I ever heard while wrestling. Usually he wrestled against my practice partner, Adam Roberts. He would get chippy with Adam, but not too bad. Not NEARLY as bad as he would get with me when he and I started wrestling everywhere we went.

I wrestled Blake for the first time ever at AAU State as a 7th grader. I showed up sporting the world’s most inappropriate-looking singlet at that tourney. It was a leopard singlet that was wayyyyy too low-cut. As in, my butt-cheeks would be hanging out of it. I didn’t anticipate this when I ordered it for $6 in a magazine and when it arrived, it was immediately abundantly clear that I would have to wear tights underneath it, for I wasn’t about to go out there wrestling in what was basically a skimpy swimsuit. Wearing the tights underneath did not help matters much, for that basically just made me look like I was wearing some kinky, smooth, lingerie suit that women order from Victoria’s Secret magazines. I had no idea until years later, just how stupid I looked wearing that “get-up.” I looked like I belonged on The Jerry Springer Show.

Anyways, I beat Blake like 4-0 that match. I was happy with that because he was good and I was stoked about reaching the semis… However, after the final whistle of the match blew, Blake elbowed me extremely hard in the mouth. My mouth was bleeding profusely. He then called me a word that starts with a “P” and rhymes with “wussy.” I was ticked and was always willing to throw down and fight in situations like these, but my lip was bleeding all over the place. In hindsight, I probably should have expected something like that considering the fruity singlet and tights I was wearing. I’m guessing Blake probably figured that I was used to being pimp-slapped like that anyways, considering I resembled a lady of the night out there.  I looked so dorky and in a way, I don’t blame him one bit. I would have been ticked off myself if I had lost at state to a guy who was dressed like Cher in one of her aerobics videos. 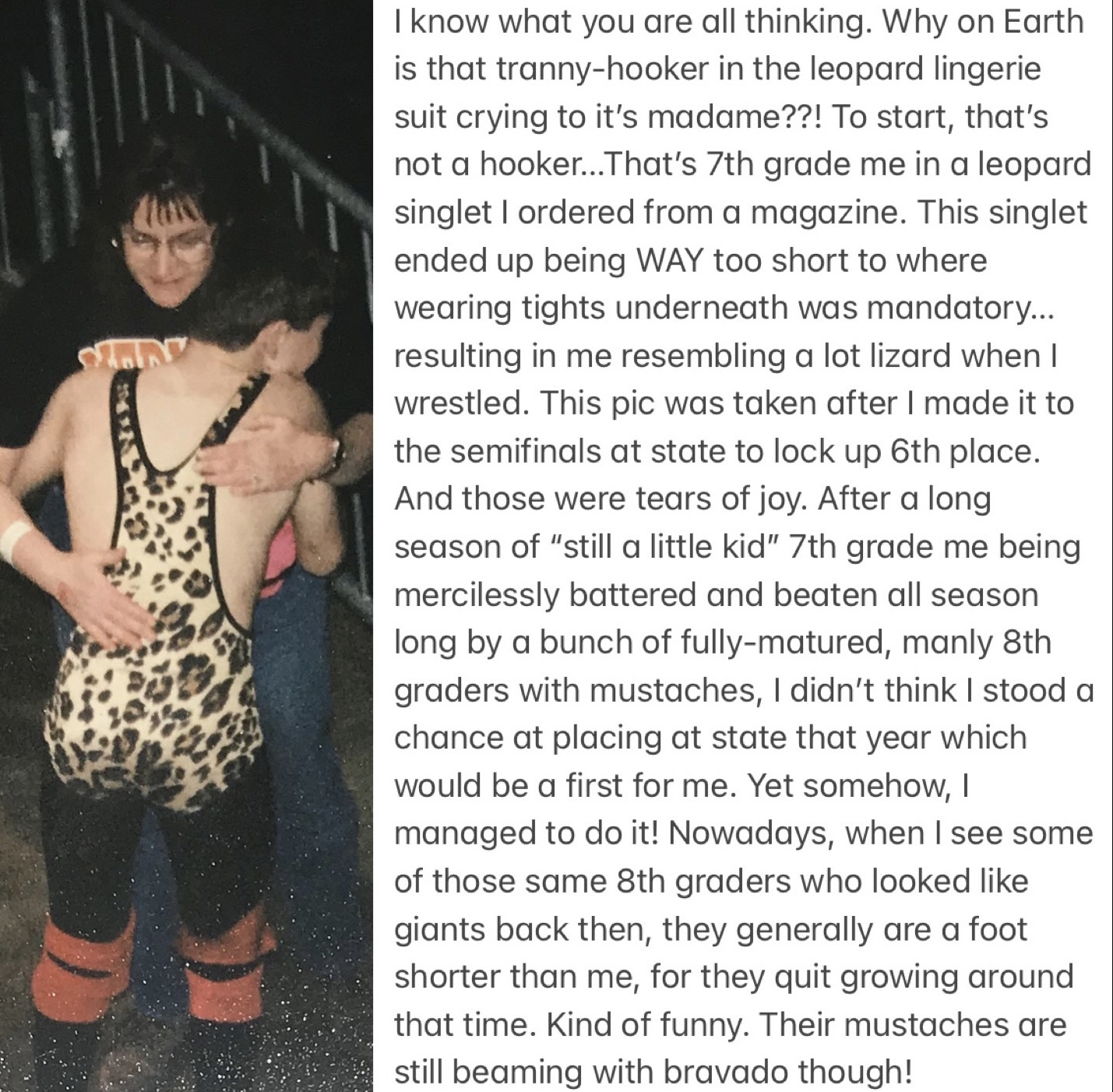 A few weeks later, I went to a freestyle tourney and was paired with Blake first round. I rocked the “leopard lingerie suit” at this tourney as well. The end result was basically the same thing. I beat him by a couple points and after the match was over, he hit me hard in the nose and this time, he called me a word that begins with an “F” and rhymes with “Saget.” I was ready to scrap this time, though. I decided to get super street with him and I pushed him as hard as I could and was all like, “what?! What?!” Then he pushed me back and we had to be separated by the referee.  It probably appeared ridiculous. It probably looked as if some street pimp got mad and “pimp-slapped” his leopard-print-wearing “lady of the night” in which the leopard lady had enough and fought back. Of all people he could have done this to, he probably didn’t expect the guy who wore the leopard-lingerie-looking singlet to fight back, but welp… I guess he just didn’t know how crazy and gangsta I was. Ya see, similar to how the Bloods wear red, I rolled with a very rowdy gang who wore leopard. We were called “The Leopard Fruitcakes.” Yeah, you didn’t wanna cross one of them Leopard Fruitcakes. You may end up getting scratched or something. Anyways , when the ref brought Blake over to shake my hand, I saw his face and I’ll never forget the little smile he had… like he was thinking, “I can’t believe this tranny-looking guy just snapped back at me.” Because of that, I walked off the mat pissed off and still wanting to scrap, but couldn’t hate the guy because it was undeniably funny.

I wrestled Blake 2-3 times after that, but with a different singlet and we had scraps after the match each time. This dude HATED me it was basically inevitable every time we wrestled that we would scrap with each other at the end of the match.

I ended up being in the same freestyle wrestling club as Blake a couple years later. I had outgrown him by like 50 pounds by this point. When I got to know him a bit, I discovered that Blake and his brother, Ty were a couple of the funniest dudes I ever met through wrestling. So Blake was a funny guy and fun to hang out with, but he was just a hot-head who really didn’t like losing to a guy who looked like he was dressed for a photo shoot for a lingerie magazine. I don’t blame him. Blake if you are reading, hope all is good, man! 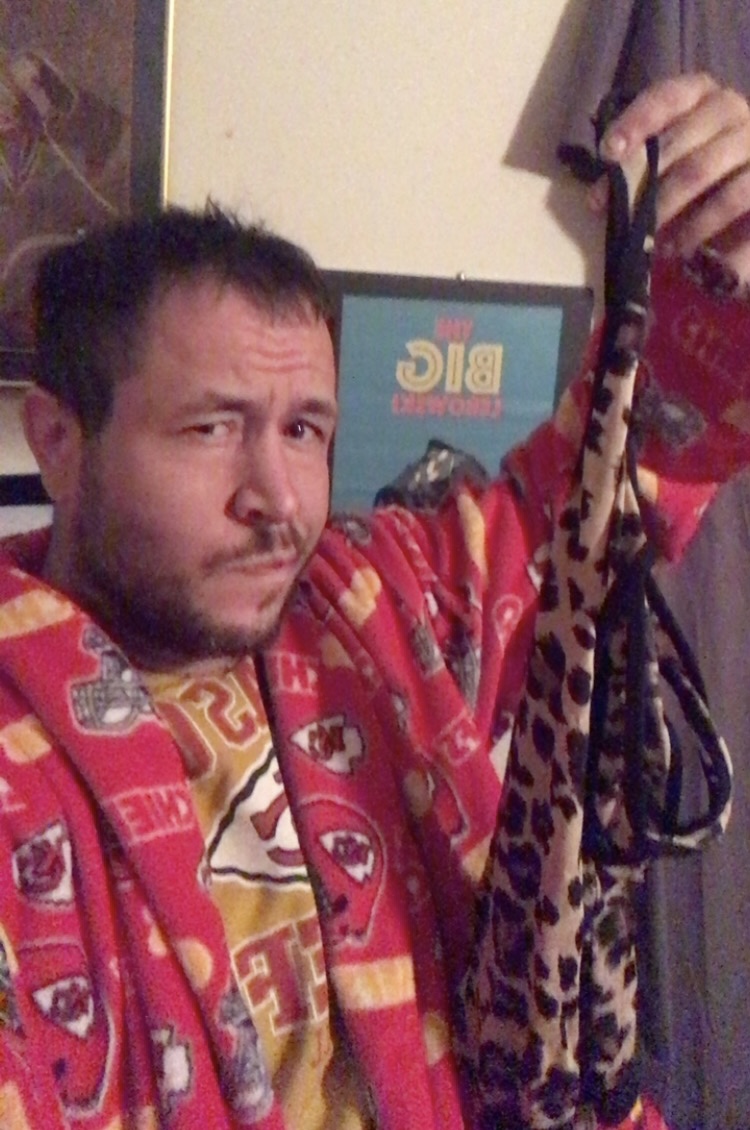 On a side note: My friends and I and even a lot of Mediapolis’s next generation had a lot of fun with that singlet over the years. Sometimes in HS when my brother Justin and my best friend, Aaron Drain and I were super-bored, we’d go to Hy-Vee or Wal-Mart or something wearing our singlets. Every time, it was a given that the ok’ leopard-singlet would be worn by one of us. And a few years after that when my younger brothers, Shea and Brennan’s age group started hitting the scene, some guys in our team would wear that singlet in the finals at big tournaments. Some of the guys who I believe wore it at least once included; Cole Erickson, Steve Holloway, Shea Swafford. Adam Drain and Drew Foster. It was a lot of fun… made me that much more happy that I ordered the silly thing.

Next post: The Gauntlet That Was The 1996 2A Wilton District