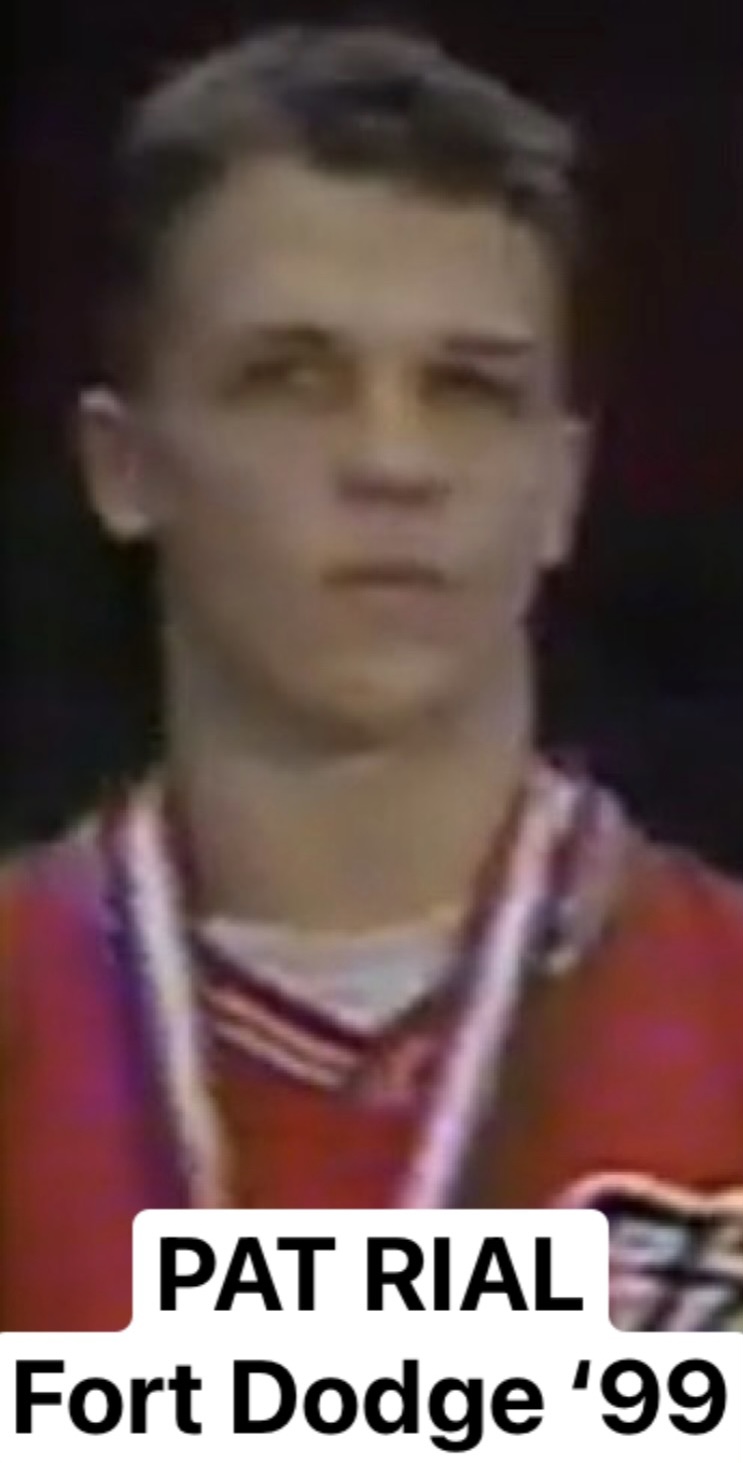 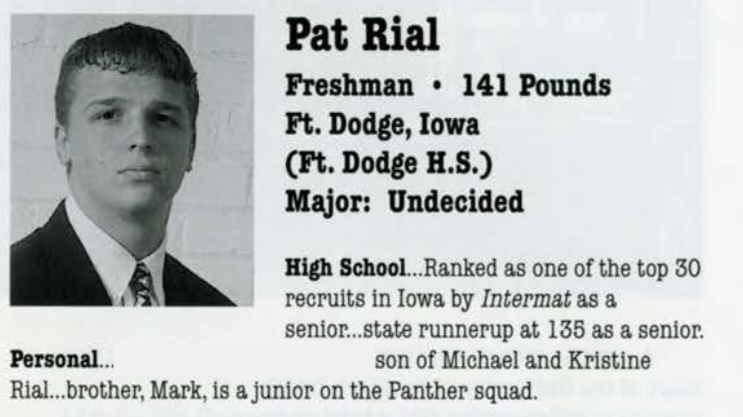 Pat Rial… I remember him very, very well, for he was always around the same weight as I was, but 2 grades above me. In HS, he was 3A and I was 2A, so we never met up, but I was very well-aware of how he did most seasons, for I always seemed to have a longtime club practice partner from Burlington HS who was at his weight and 3A. Not to mention, he and I wrestled a lot of common opponents throughout the years. He had a few matches where he absolutely dismantled guys that would give me fits. So let’s just say, the fact that he and I never met up was not something that made me sad, by any means. He was a tough, tough dude and had a great career, qualifying for state 4 times, placing twice and making it to the finals his Senior season. And despite putting together a respectable career like that in which thousands of wrestlers could only dream of having, I can’t help, but point out that he endured some agonizingly frustrating moments as well. We will get to that.

So Pat is the youngest brother of the 3 Rial boys. Sons of longtime Iowa wrestling advocate, Mike Rial. All 3 brothers were hammers! Matt was the oldest and a state runner-up. Mark was the middle sibling and a 2X state champion. And then Pat finished off the Rial trifecta of “Dodger-badassery.” “Dodger” as in “Fort Dodge.” The Rial’s are to this day one of the most synonymous names with “Fort Dodge wrestling.” Which is a pretty big deal given their rich history. Fort Dodge has a state-wide reputation of being tough on the mat and off of it as well. Not to say that Fort Dodge are the type of people who start fights, for I’ve never noticed any of that. It’s just that they will always speak their mind, stick up for what they feel is right at all times and regardless of who is around, have each other’s back’s, and they will always be real with you no matter if it’s something you want to hear or not. And while they don’t typically start fights, it’s surely not a good idea to start one with one of them. Being “real” is a way of life to the Dodger community. Some Fort Dodge people refer to it as being “Dodgey.” They are one of my absolute favorite subcultures in the state of Iowa, without a doubt. And the Rial’s are a big piece of the Dodger wrestling pie…how cool is that?!

Pat had a lot to live up to being the youngest of 3 Rial brothers, but he lived up to it well and did so from a young age, for I believe he won AAU Youth State at least a couple times.  The only bracket/podium picture with him that I could locate was from his 6th grade year, in which he placed 2nd to David Brown from Le Mars, which ended up being kind of coincidental for reasons that you’ll read about later. And man, that year he won a couple huge matches to reach the finals. Most notably, he defeated future NCAA Champion for The Hawkeyes, Cliff Moore, who had just defeated a future NCAA runner-up for the UNI Panthers, Dylan Long from Creston the round before. Even back in AAU, it was rare to see Dylan or Cliff ever lose, so it was a big deal for Pat to win that quarter he was in. Brown beat Rial by 1 point in the finals. 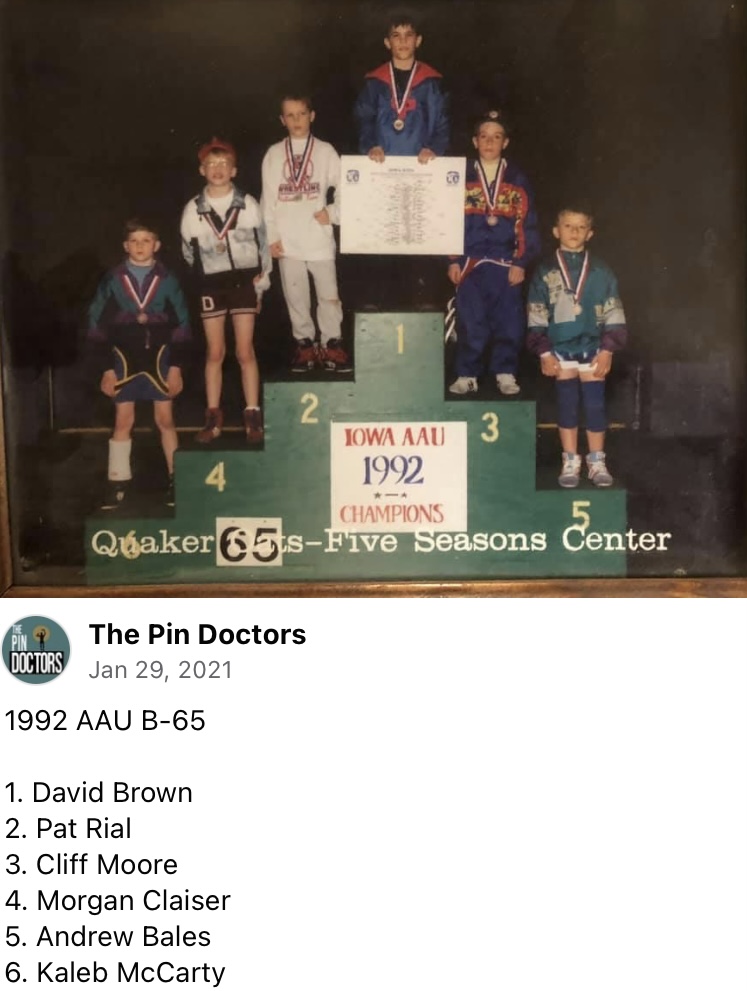 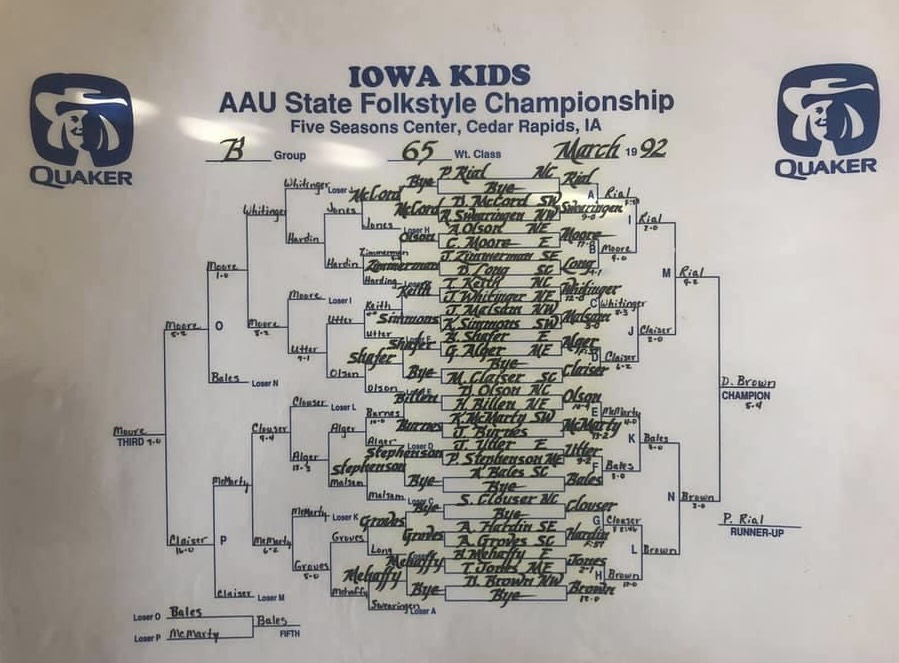 In HS is where things got a bit frustrating for Pat. To start, you know what the difference between Pat being the 2X placer he was and a 4X placer he was close to being? 1999 (his graduating class) and 2003. The 2 years Pat didn’t place, he did make the top 8, but sadly, they didn’t place the top 8 guys until 2003. Only the top 6 made the podium in those days. Makes you wonder how many guys who wonder about all the guys who have placed 7th/8th multiple times since 2003…

As a Freshman in 1996, Pat Rial came into state and drew Tony Brown from SC Heelan first round and was defeated 5-4. He then picked himself up and won the next two matches over Jay Bollman and Chad Gotto before being eliminated by future state runner-up, Bobby Duggan of Muscatine. A top 8 finish as a Freshman… I’m sure it’s not what he wanted, but it wasn’t a bad showing at all! 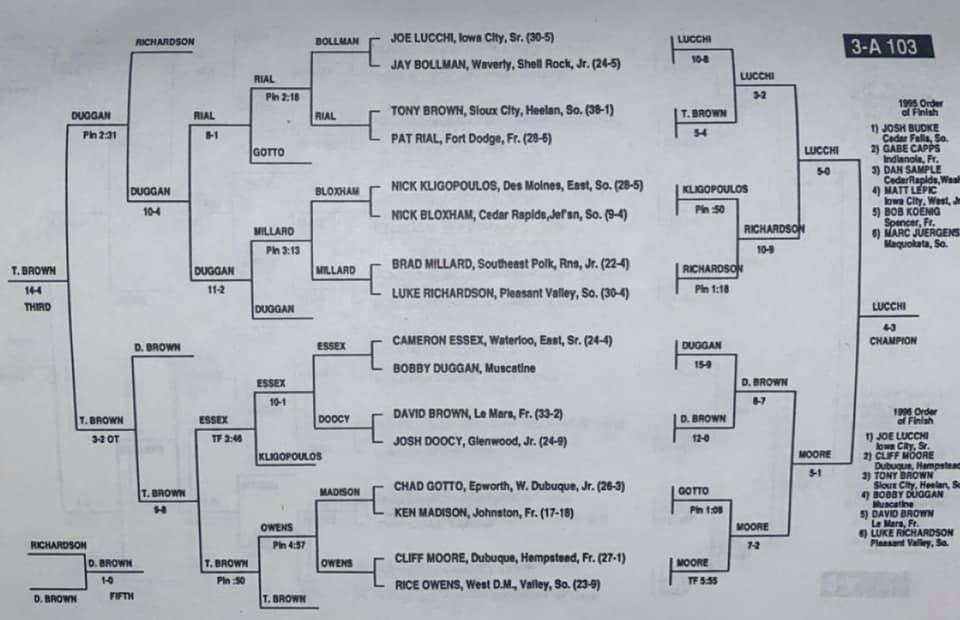 As a Sophomore in 1997, Pat qualified at 3A 112 and was defeated first round by the guy he beat in the consolations the year before, Chad Gotto of Western Dubuque. And despite being presumably frustrated out of his mind, he bounced back and won 3 close matches on the back side to reach the top 6 where he was stopped by a familiar foe in the consolation semifinals, David Brown of Le Mars. Brown was the guy who beat Rial in the finals at AAU State a few years before that. I am guessing those two wrestler 50 times in their careers. Pat ended up settling for 5th. 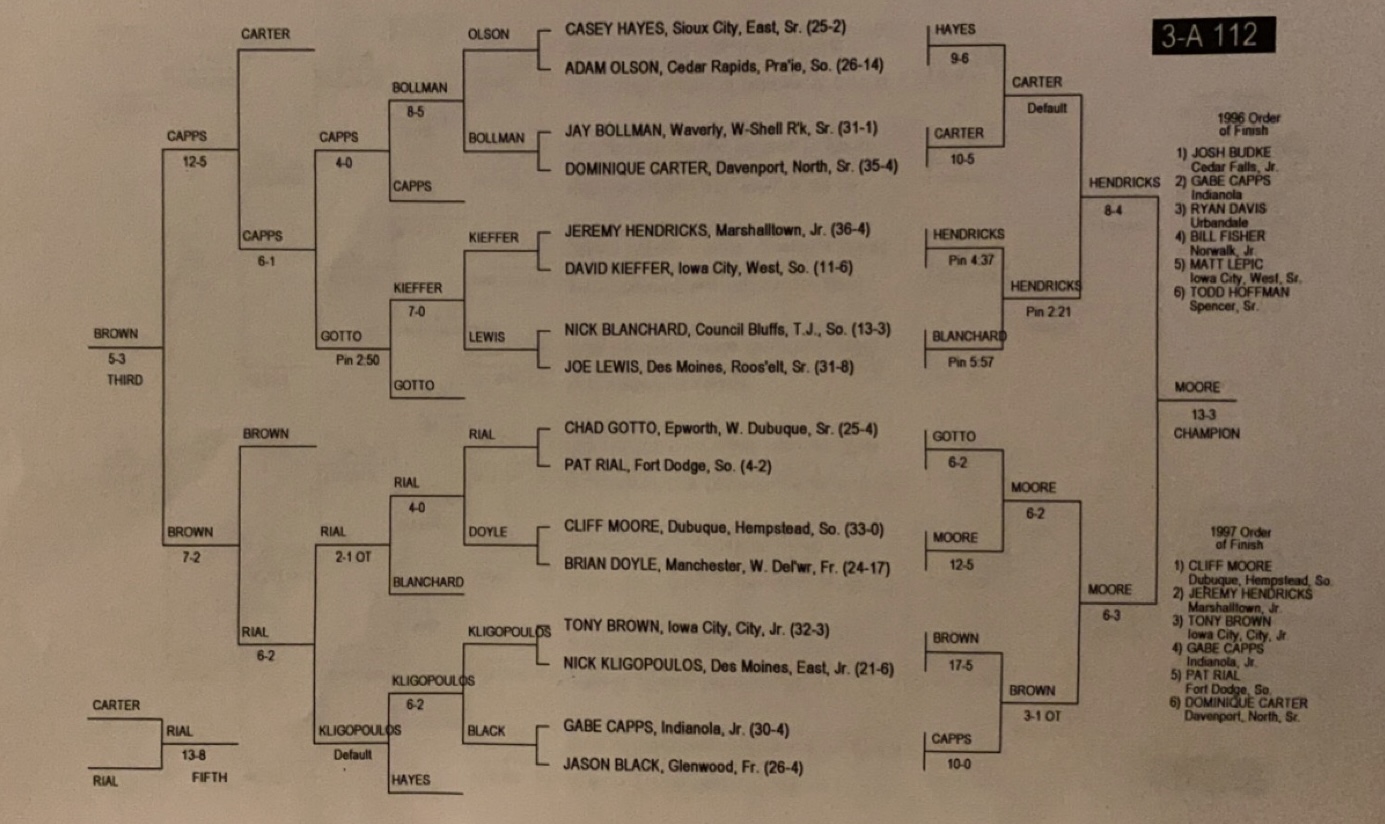 As a Junior in 1998, Pat Rial came into the state tournament at 3A 130, sporting a flawless record of 34-0 and made it to the quarterfinals where he was stopped by another undefeated wrestler, Eric Sinclair of Cedar Falls. Pat won his next wrestle-back, but was beaten in the blood round for the second time in 3 years to that point. Tim Ironside from CR Jefferson won that bracket… that’s a great dude/great wrestler right there. 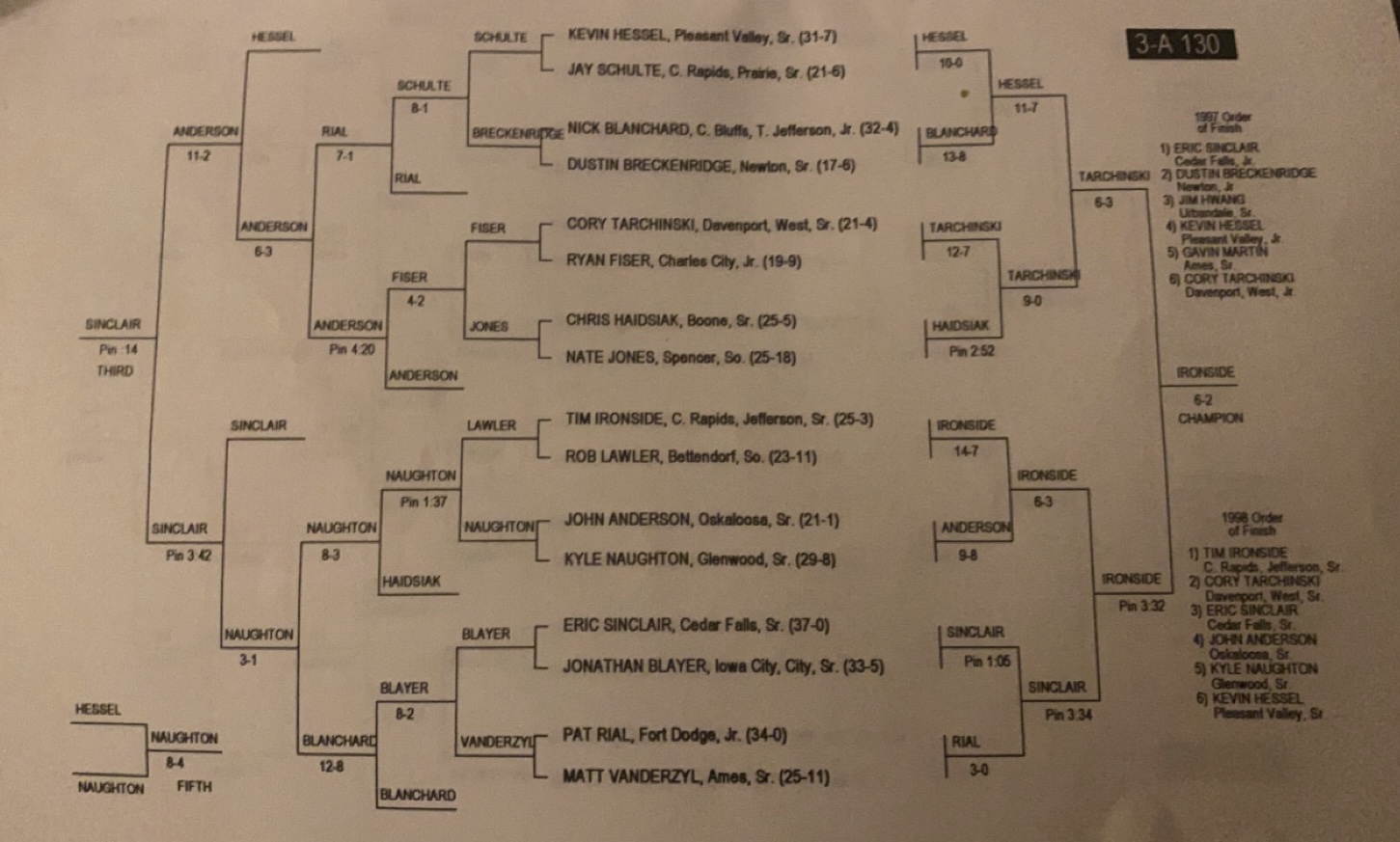 I remember Pat’s Senior year at state in 1999  vividly. I watched a lot of the matches in that bracket, for my longtime youth practice partner and best friend, Adam Roberts of Burlington was in the same bracket as Pat and on the same half. Pat picked up some nice wins, a couple in which he looked straight-up dominant against 3 good wrestlers in John Gabrielson (IC High), Justin Scott (Osky) and Jim Kennedy (Dubuque Senior). To someone who just walked in and saw only Pat wrestle those matches, they’d likely assume that he was in the process of bulldozing his way through the tournament in dominant fashion. However, the state wrestling tournament landed on Groundhog Day for Pat that year, for he had a familiar foe who had given him fits for years…David Brown of Le Mars. I remember looking out there and seeing those two on the mat and remembering the success that I had seen both of them have since we were little kids and just couldn’t wrap my head around the fact that one of them would not become a state champion in HS. David Brown had also come close in years prior, but was still working on his first HS title. Those two had a pretty decent match in which it seemed like there was a lot of battling for positioning and control and ultimately it was Brown who came out on top of the scrambles they had and won his first state title. Pat wrapped up a very impressive HS career as a 2X placer/1X finalist who had won enough big matches over highly ranked competition to get himself ranked in the top 30 nationally at his weight by Intermat. 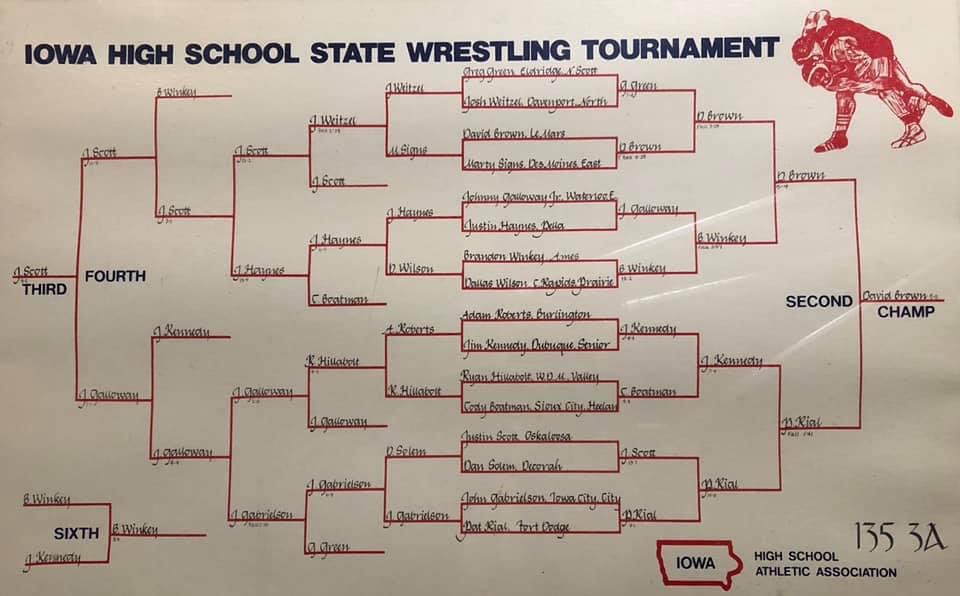 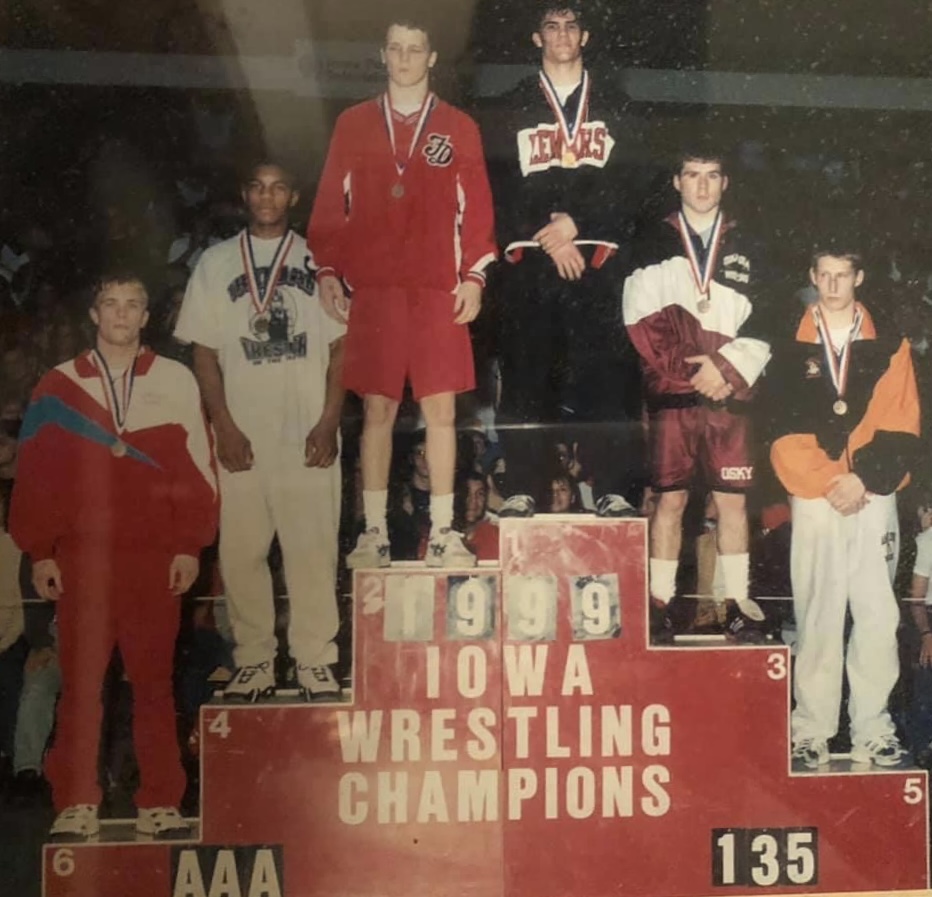 Pat went on to wrestle for the UNI Panthers. He has since done some coaching, I believe at a variety of schools such as Saydel, Davenport West and I THINK Fort Dodge.