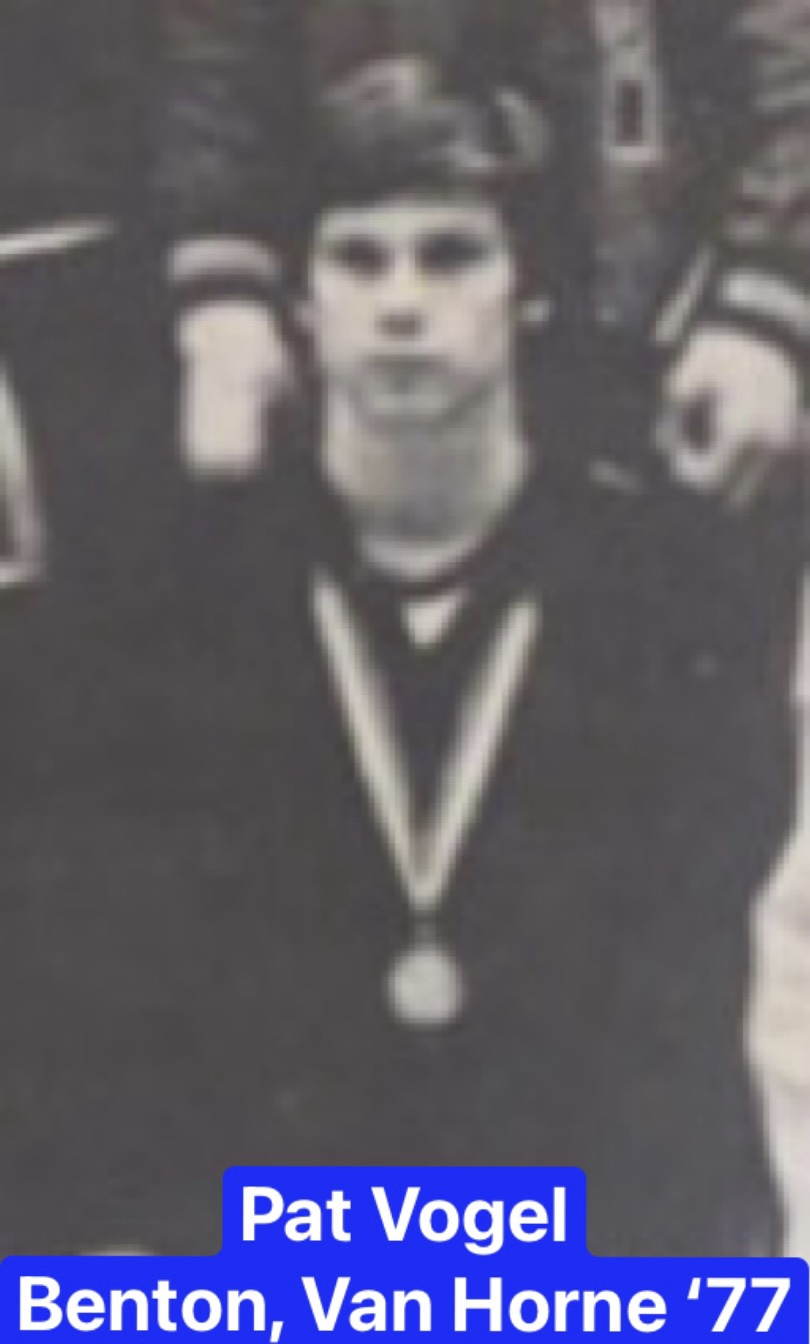 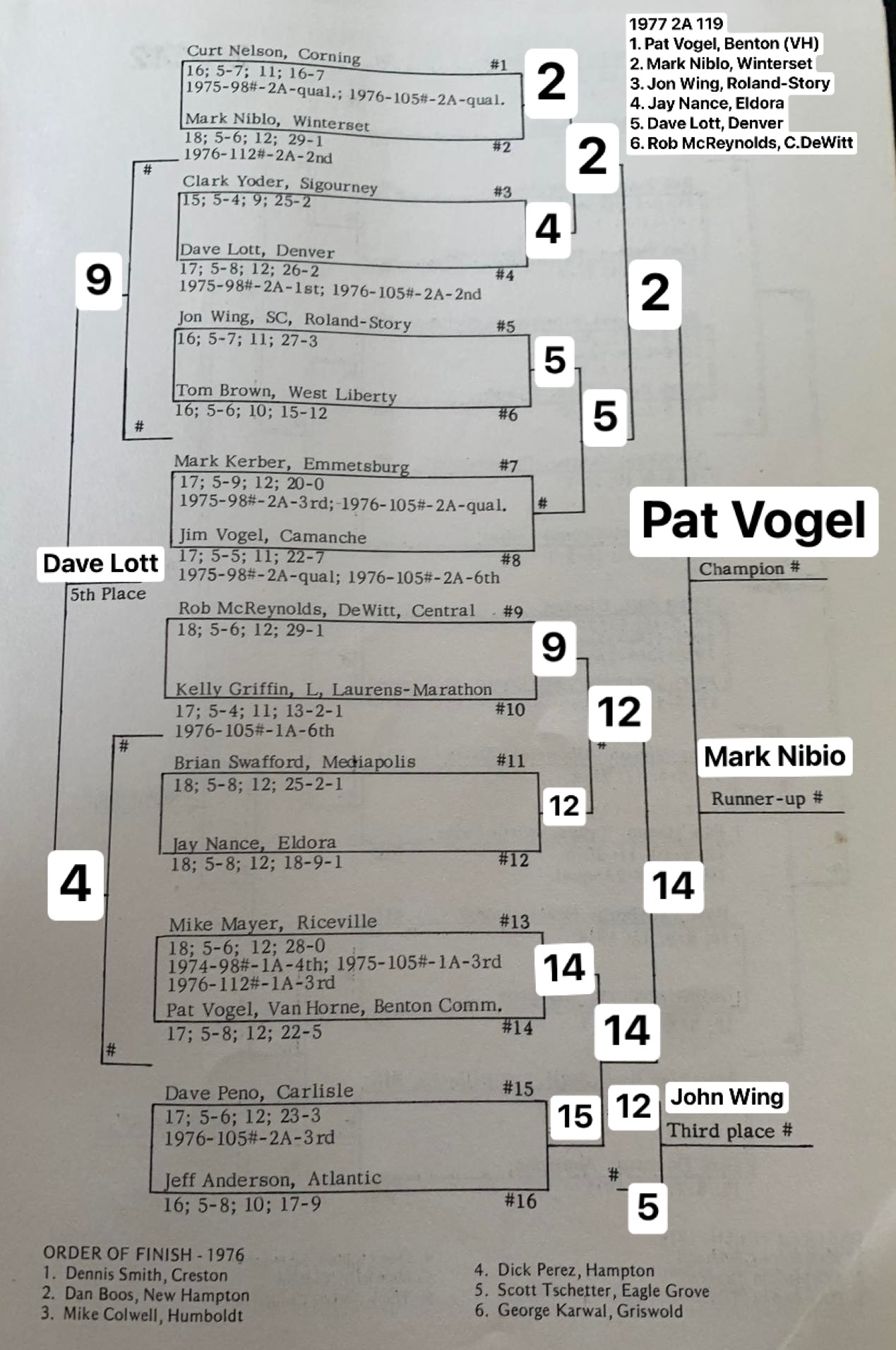 In 1977, one of the most loaded weights in the entire state tournament was undoubtedly 2A 119. This weight included the following:

Mark Kerber (SR), Emmetsburg HS: He was a returning runner-up.

Kelly Griffin (JR), Laurens-Marathon: He was a Returning 6th Placer.

Brian Swafford (SR), Mediapolis HS: My Uncle Brian Came in with a 25-2-1 Record.

So as you can see, 12 of the 16 competitors in this weight class were either returning state champs/finalists/placers/qualifiers or had close to zero losses on the season. One would assume that one of these guys would be the one who graced the top of the podium when all was said and done, but that’s not how it happened. As it turned out, there was a guy who made his first appearance at the state tournament that year and sported a season record that was littered with a handful of losses who’s hard work that season paid off at the right time, for he caught fire and stunned fans when he won this gauntlet of a bracket. His name was Pat Vogel out of Benton (Van Horne).

So let’s start at the beginning… Pat Vogel started wrestling in 7th grade, but did not wrestle in 8th grade. In fact, he did not go out for wrestling until after Christmas his Freshman year in HS after his Coach had an in-home visit with his Dad over Christmas Vacation. So he got off to a late start in his career. Had to play some catch-up in his first 3 years of HS, but as a Senior, he qualified for state for the first time with a respectable record of 22 wins and 5 losses. At least 2 of these losses were to Freshman, Clark Yoder of Sigourney. Yoder was a future phenom who ended up winning 3 state titles by the time he was finished.

Pat ended up catching fire at the right time, for he defied spectator logic by winning all 4 of his matches at the state tournament. And he beat some absolute HAMMERS in doing so. Heck, you’d have to considering how deep that bracket was. Word is, Pat won 3 out of his 4 matches at state in OT, although I’m not for certain which ones those were First round, Pat defeated Mike Mayer of Riceville. Mayer had placed 3rd twice and 4th once in his first 3 HS seasons. 2nd round, Pat defeated Dave Peno of Carlisle who placed 3rd the year before. In the semifinals, Pat defeated Jay Nance of Eldora which put him in the finals vs. returning state runner-up Senior, Mark Niblo of Winterset. This match was so close that it was decided in OT via referee’s decision. The referees declared Pat Vogel the winner and state champion.

Pat’s story is a story of an extreme underdog who had to overcome a lot just to be able to go out for wrestling and through sheer will and crazy work ethic, brought home a state title when nobody expected him to. His story is not one that reflects flawless domination as much as it is a story of hope and timely perseverance and any current wrestler with a few blemishes on their record could utilize his story as something that inspires them and in turn, believe in themselves in their own wrestling journeys despite the fact that they may be labeled by the pundits as “underdogs.” Anything is possible with an exceptional work ethic and Pat Vogel is proof of this. 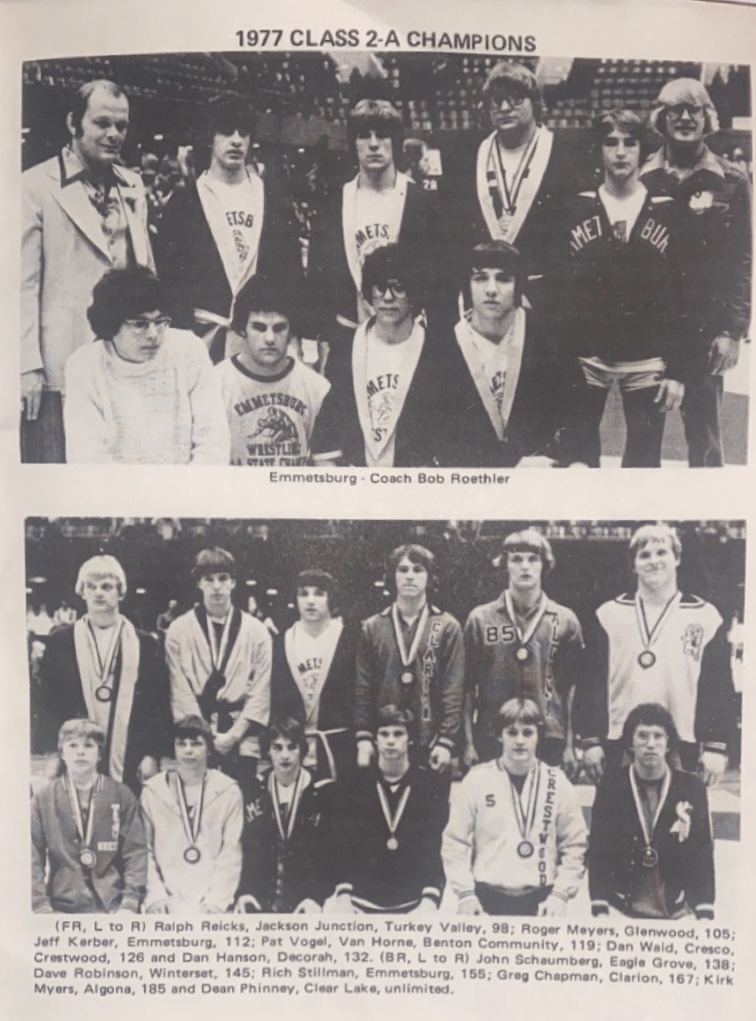 A FEW MORE INTERESTING NOTES THAT REFLECTS HOW SMALL THE WORLD IS:

-Oddly enough, there were two Vogel’s in this bracket…Pat Vogel and Jim Vogel of Camanche.

-My uncle Brian Swafford was in this bracket. I heard about this weight class several times at family get-togethers a growing up.

-Pat had a son named Chris who was an incredibly successful wrestler out of Wisconsin. I’m not sure how he did in HS, but I remember hearing that he was recruited by Dan Gable, so he must have been awesome. He wrestled collegiately at UW Platteville before transferring to Loras College as a Senior where he was teammates with… Freshman me. There have been several times where I have referred to not having my priorities straight when I competed at Loras College and Chris was another guy that I was lucky to have as a teammate who was a great leader that led by example and should be considered a great role model to everyone who was on that team at the time. He was an incredibly hard worker who put up some great results to boot! 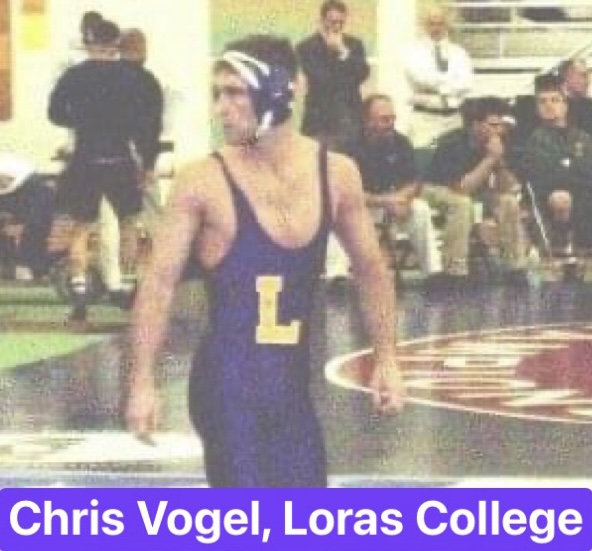