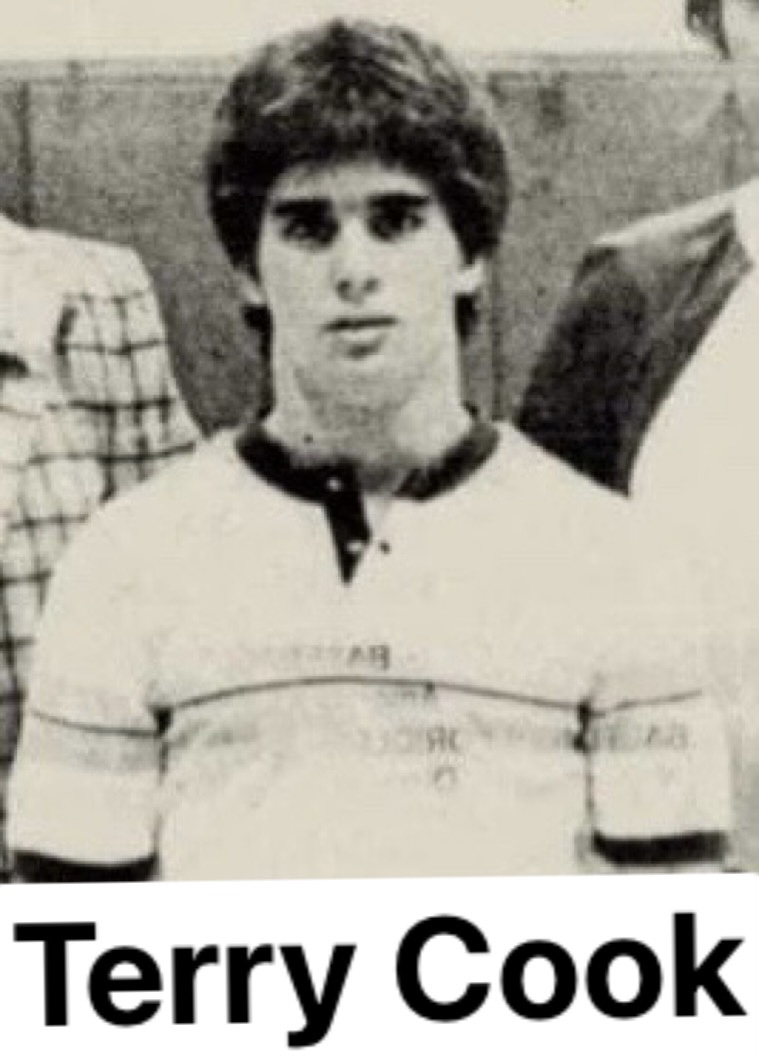 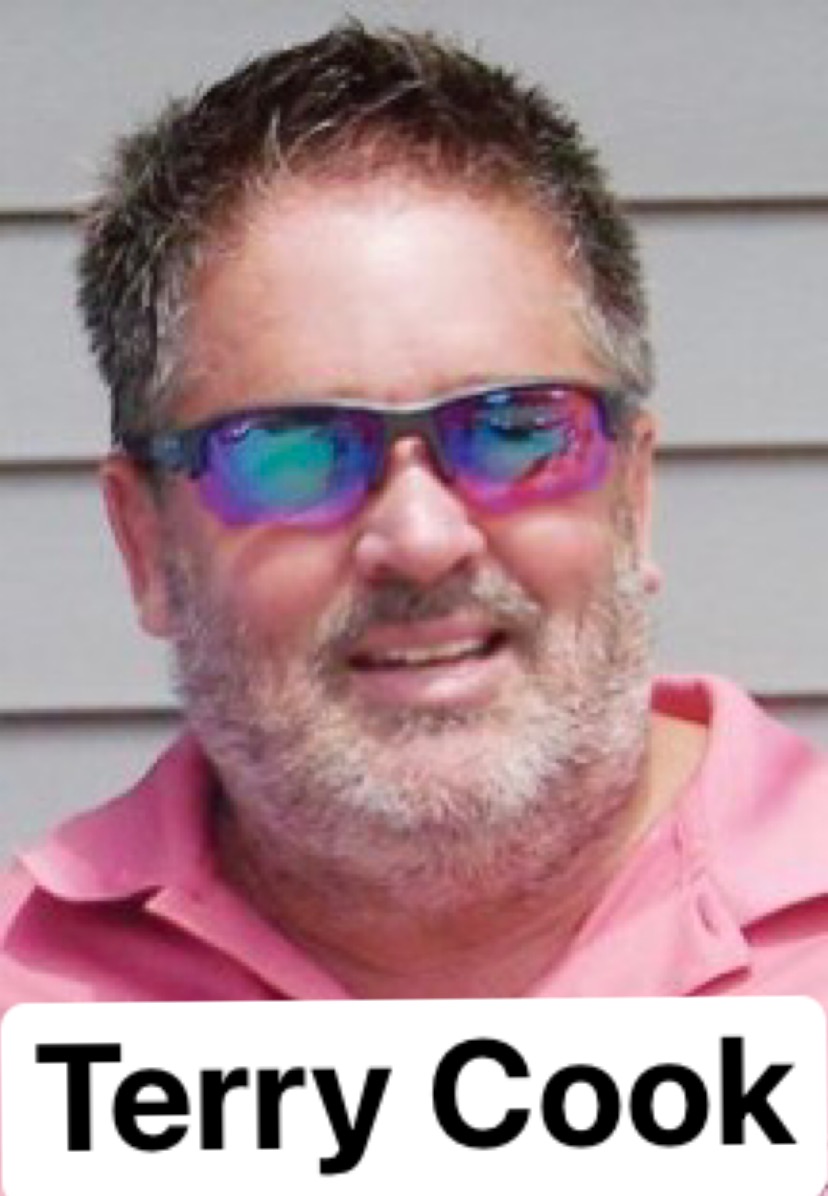 Terry Cook has one of the most head-scratching, not to mention, borderline tragic Iowa HS wrestling careers that I’ve ever come across. And even with that being said, it was still a GREAT career that most wrestlers could only dream of putting together.

Ok, so Terry Cook was a 3X placer/2X runner-up who placed 2nd, 3rd and 2nd in that order. Now, since there are 4 years in HS, I am guessing that most of you are going to assume that those placings BEGIN his Sophomore year, but they don’t. They begin his Freshman year. He placed 2nd as a Freshman, 3rd as a Sophomore, 2nd as a Junior and…did not qualify as a Senior in 1984. Word is, he was injured right before districts his Senior year and couldn’t compete. This guy, considering some of the guys he defeated in his career as well as some of the accolades he reeled in, is one of the absolute best wrestlers to ever compete at the HS level in our state… One of the 🐐’s. And he just happened to have terrible luck with the injury bug right before the postseason of his Senior year in HS after 3 years of falling just short of winning state. I seriously can’t even wrap my head around how unlucky that is.

To start, get this stat… In Terry Cook’s first 3 years of HS wrestling (and maybe Senior year, I do not know), he didn’t have one single regular season loss. NOT ONE. Isn’t that incredible?!

Terry came into state as a Freshman with a 25-0 record at 3A 105 and defeated Mike Franken of IC West, Marty Hug of CB Thomas Jefferson and Mike Froeschle of Davenport Assumption to make the finals where he faced returning state champion, Mike DeBartolo, where he was defeated. Terry finished his first year of HS as a state runner-up with a 28-1 record. Not too shabby! 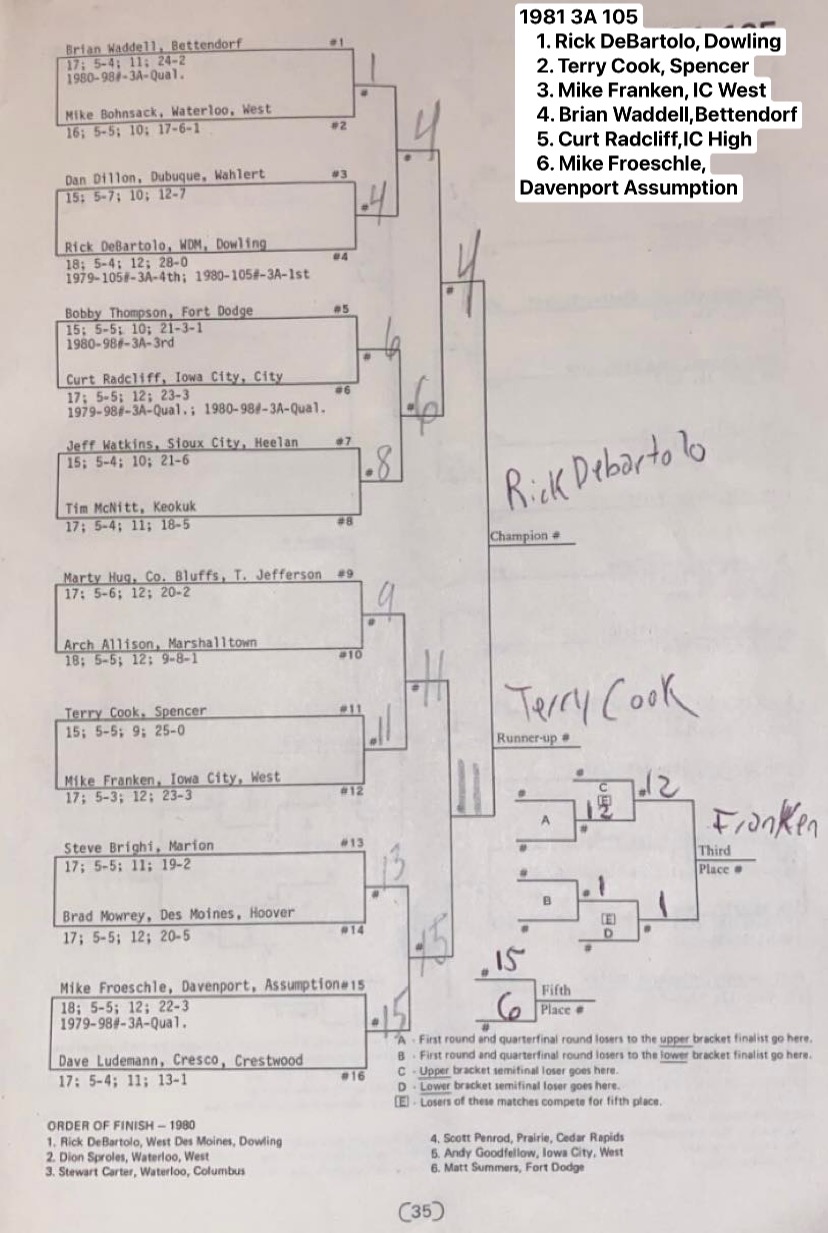 As a Sophomore in 1982, Terry qualified for state at 3A 112 lbs with a record of 20-0 and waltzed his way into the semifinals after defeating Justin Reinert of CR Jefferson and Greg Blount of Clinton. In the semis he met up with a phenom out of Waterloo West named Tim Klinghammer. Klinghammer had won state in 1980, but transferred schools and had to sit out the 1981 season. Therefore he was going for his 2nd state title in 1982, but likely should have been going for his 3rd if it weren’t for the transfer rules. Some of the guys who have described Klinghammer as one of the best ever include greats; Jim Gibbons (Ames/Iowa State), Mike VanArsdale (Waterloo West/Iowa State), Mike Schwab (Osage/UNI) and Chuck Yagla (Waterloo Columbus/Iowa). He defeated Terry Cook 8-1, it appears. Cook fought back and won two nice matches over Larry Shepherd of Ottumwa and Craig Cervantes to place 3rd. He finished the season 24-1. His career record at this point stood at 52-2 with both losses coming to a pair of 2X state champions at the state tournament. 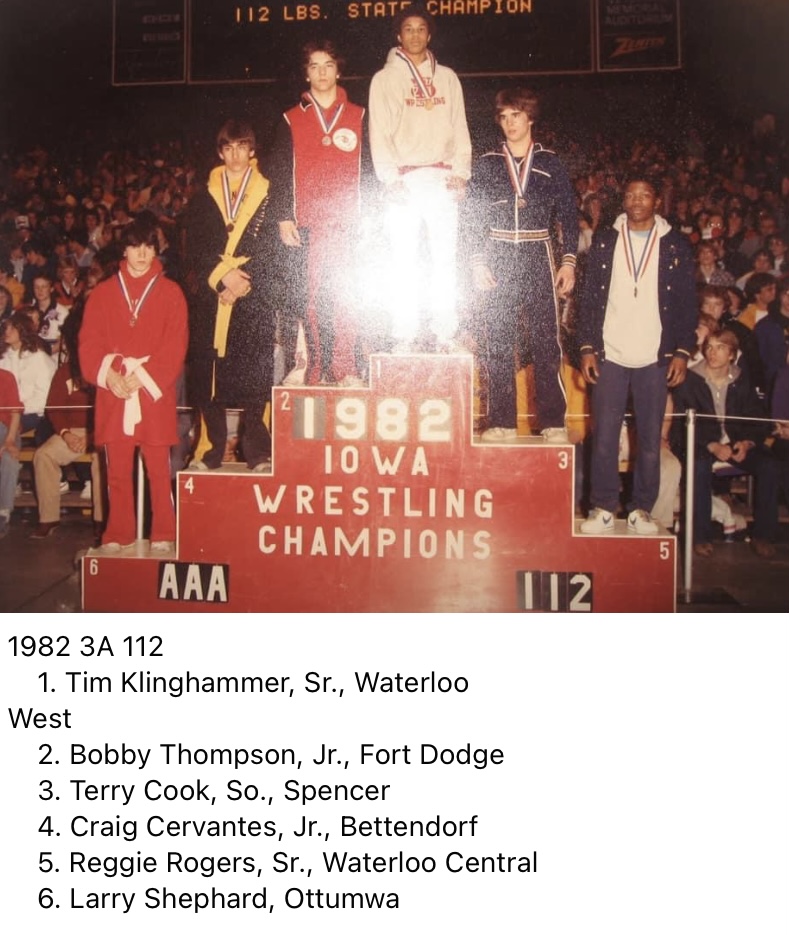 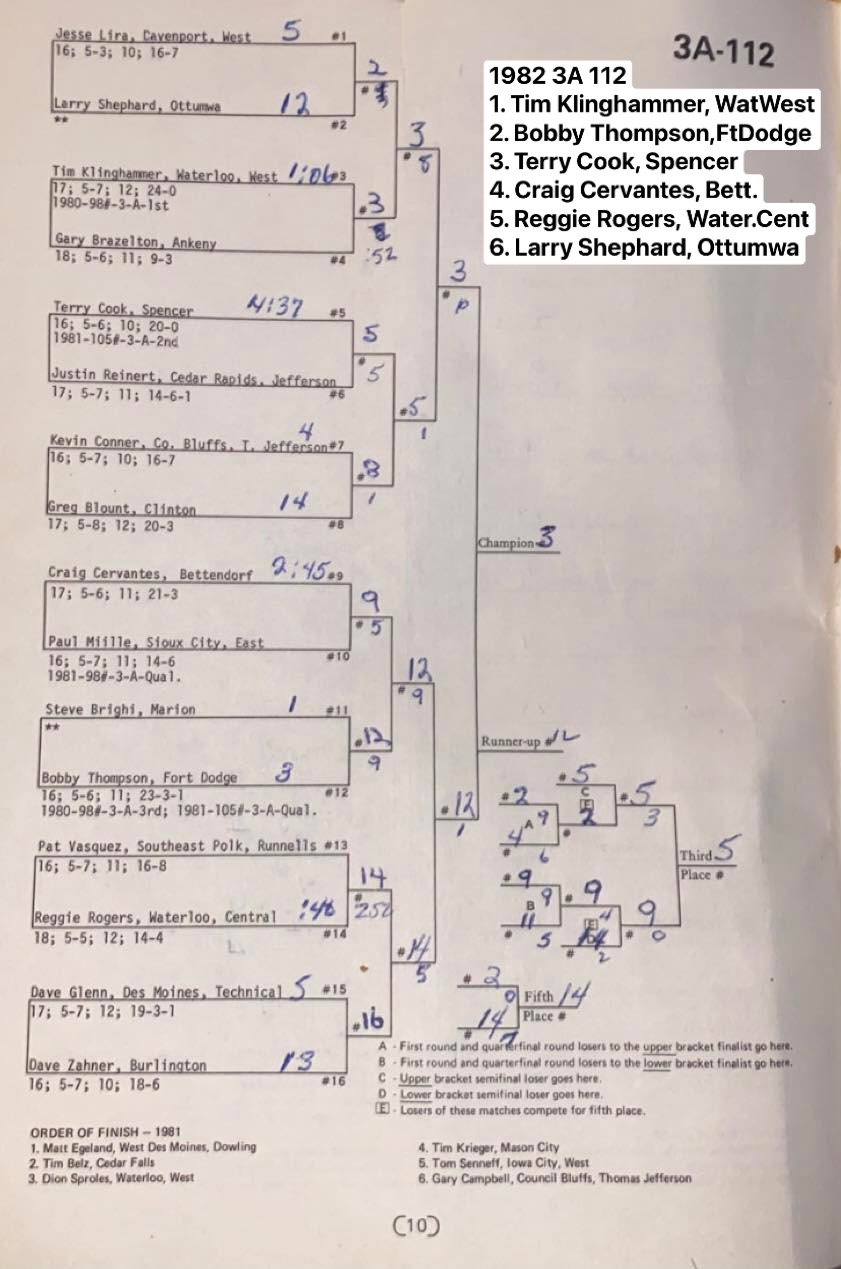 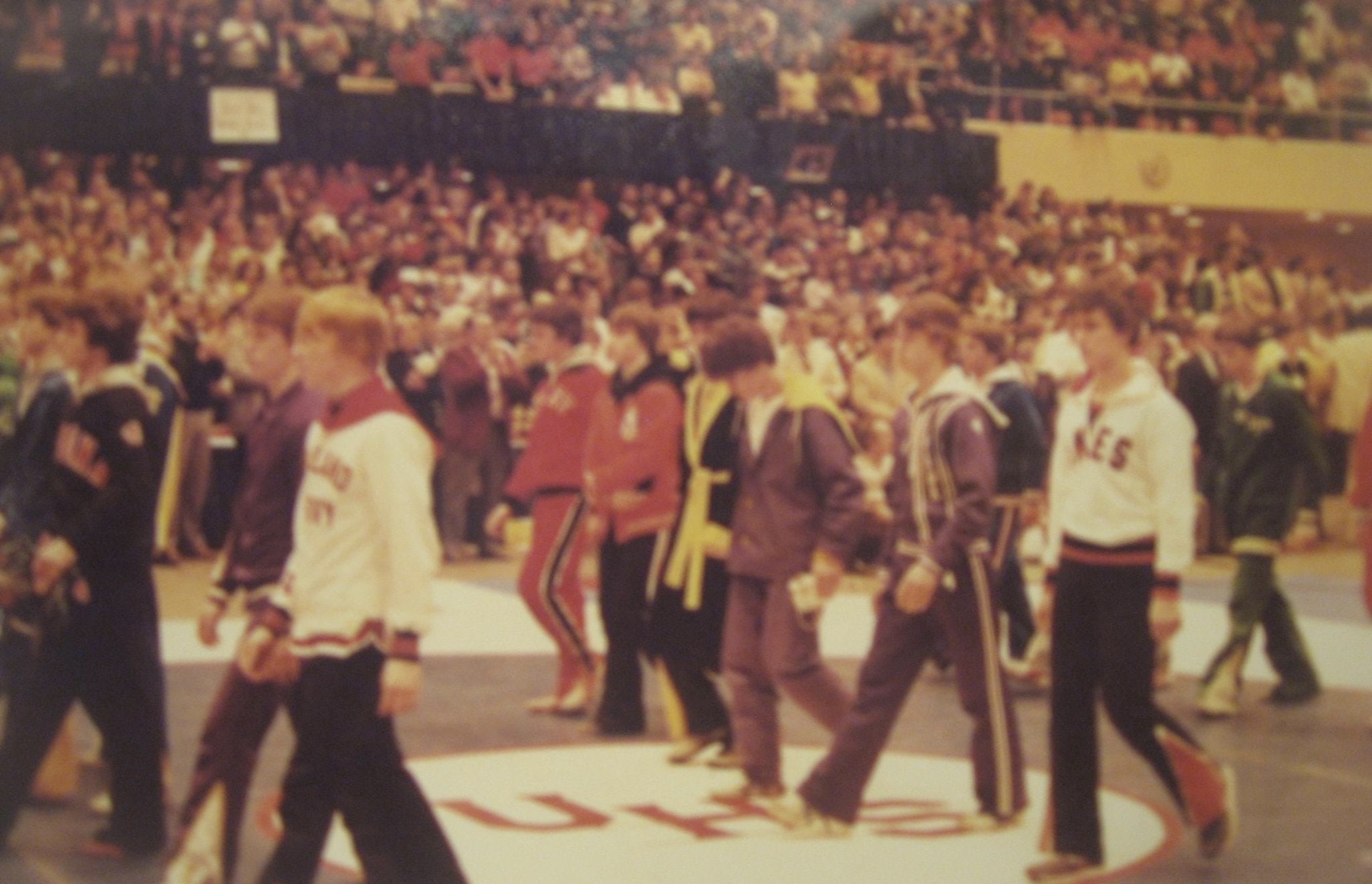 Terry came into the state tournament as a Junior with another undefeated record. His record was 21-0-1 (1 tie) coming in to the tournament that year and prior to the finals, he had his most impressive run at the tournament to date. First round he pinned Chris Young of Dubuque Senior. This set up an epic showdown between Terry and returning 2X state champion and Junior Freestyle National Champion, Cory Mills of Waterloo East who was just a Junior at the time. How did this go?! Terry defeated Cory by the score of 4-1… squashing Cory’s hopes of becoming a 4X state champion. Terry still had his work cut out for him, however, for he had to get by the guy he defeated for 3rd and 4th at state the year before, which was Craig Cervantes of Bettendorf. Craig was also in that upper tier with the rest of these guys and if he didn’t win against someone, he at least kept it close. And it was no different against Terry Cook, for Terry advanced to the finals for the 2nd time in his career after defeating Cervantes 9-6. This set up a finals matchup that became one of the darkest, saddest moments of Iowa HS State Wrestling history. He faced returning state runner-up Junior, Jeff Gibbons of Ames HS. Both guys were under an immense amount of pressure to win this match. For Terry, he had been to state twice already and had only lost one match in each tournament, placing 2nd in one of those years and it was a long time coming for him. For Jeff, he was the youngest of 4 brothers who just happened to be the most decorated wrestling family to come out of our state at the time, with all 3 of his brothers winning state at least once and the oldest (Jim) winning 3 and the 3rd son (Joe) being a 4X state champion. And Jeff was a Junior that year and still working on his first title in hopes of not becoming the only Gibbons brother to not win a state championship. The pressure was on Jeff Gibbons before he began his HS career, simply because he was a Gibbons. And the match between Terry and Jeff was a nail-biter all the way until literally the last microseconds of the match. Jeff held a 4-3 lead and they were on their feet with time winding down, when Terry hit a shot that put Jeff to his butt and it appeared that Terry had secured the takedown just barely before the time ran out… When the whistle sounded, Terry celebrated, for he thought he had just won his first state title against a guy from one of the state’s best ever wrestling families in heroic fashion. However…there was a catch… right when Terry took the shot, the official ran to get into position to make the correct call and when he ran, he got away from the towel-boy, who was trying to “bop” him to indicate the time being out. So with that said, the towel-boy was not able to “bop” the referee until a couple-few seconds after time had run out. The question was, “did time run out before or after Terry covered Jeff’s hips for the potential takedown?” The official made the decision that time had run out and Jeff was declared the winner. The entire place erupted. I’m sure some were cheering, but it was mostly boos. Things got ugly when they received their awards. When the medal was placed around Jeff’s neck and he was announced as the 1983 3A 119 state champion, a moment that should have been the best moment of his life considering he had just joined his 3 older brothers as a state champion, was sabotaged by one of the loudest eruptions of boos that ever went through Vets. Jeff Gibbons went from being on “cloud-9” a couple minutes before while he was being interviewed by IPTV to appearing utterly heartbroken the moment he received his gold medal due to the booing that polluted the place. And there was Terrr Cook standing next to him, obviously looking devastated himself…He was so heartbroken that all he could do was look at the ground while standing on the podium. It’s a difficult thing to watch and I hope that anyone there who booed Jeff thought about it some more after the fact and regretted it. Because it was ugly. One of, if not the darkest moment for the Iowa HS State wrestling tournament ever. And before anyone starts thinking that I am slamming Spencer wrestling fans, I want to make it clear that I am not, for I don’t believe they should be blamed for this. The Spencer wrestling community is a good one from my personal experiences. I had a couple college teammates from Spencer. GREAT people! Were there Spencer wrestling fans who voiced their displeasure with the outcome? Well yeah, I assume so.  But the booing that took place in that moment was too loud to be just the Spencer wrestling fan base. It sounded as if it was coming from every section of the auditorium.  My guess is that given Jeff’s last name, the crowd had considered Jeff the heavy favorite to win the match considering the Gibbons brothers had a combined record of something like 34-1 at the state tournament, coming into that state finals match. People love to witness an upset and will root for the underdog to pull one off, regardless of whether or not they know the guys competing or not. So I think that is part of the reason why the crowd seemed emotionally invested in Terry Cook. Another reason could be because of his older brothers achieving success for the Iowa State Cyclones at a time where Iowa Hawkeye wrestling was on a steep incline in terms of popularity. So a lot of Hawkeye fans could have been upset with the outcome. Whatever the case, it sure was unfortunate.

Video to that match: 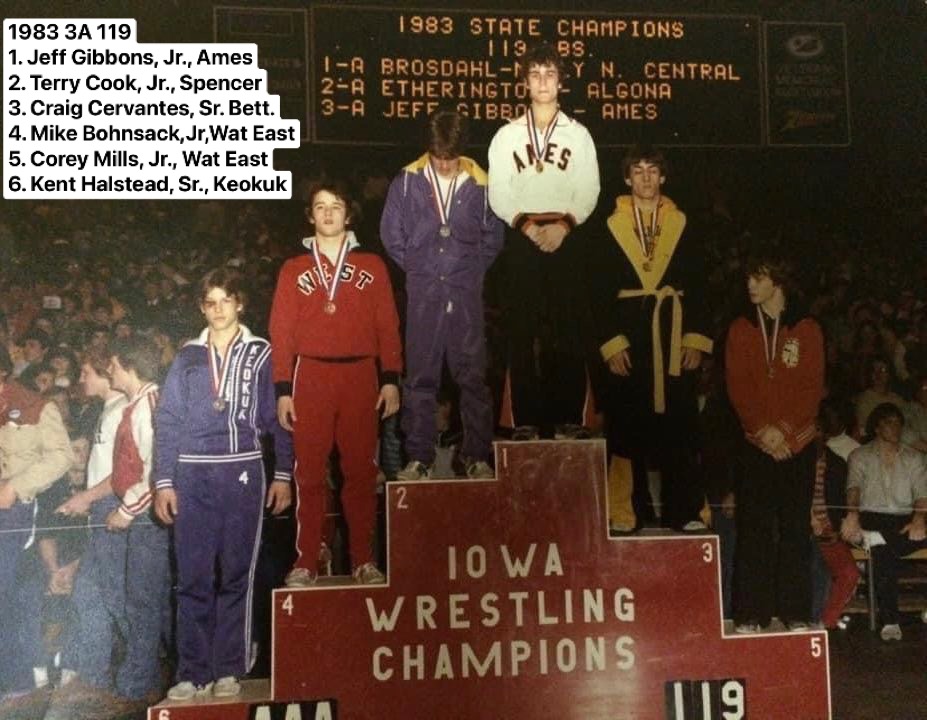 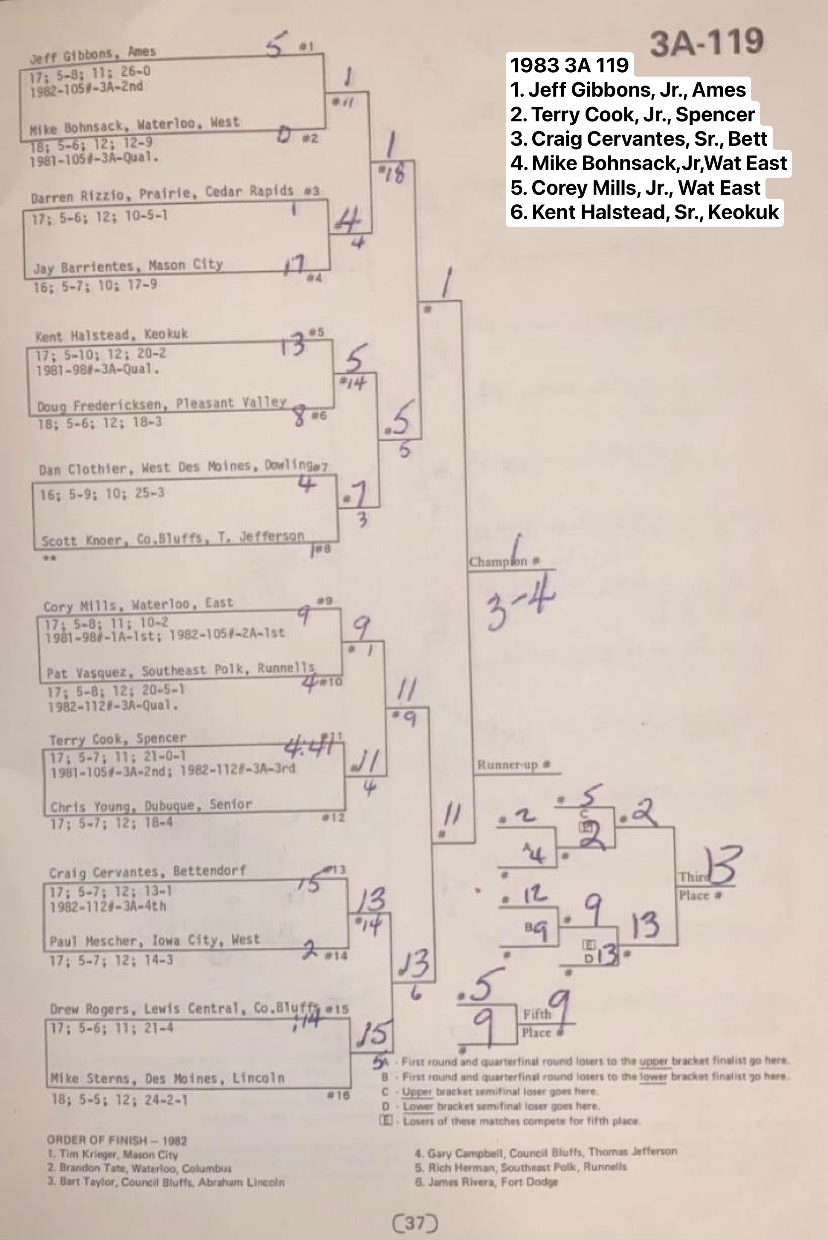 Terry Cook had some great moments in the off-season/Freestyle scene as well. Most notably, he won the Fort Madison Tri-State Freestyle Tournament, which was a qualifier for Nationals and he defeated phenom, Steve Knight from Clinton HS to do it. Terry was named the Outstanding Wrestler of the tournament…a tournament that included the likes of Mark Schwab, Mark Sindlinger, Terry Schmuecker, Royce Alger, Tim Krieger, Kirk Azinger, etc. just to name a few. 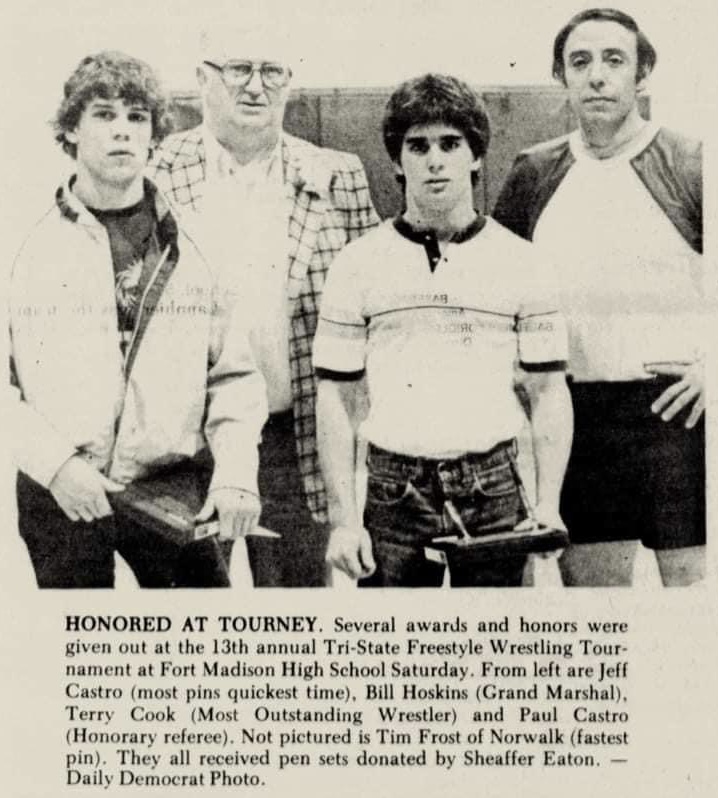 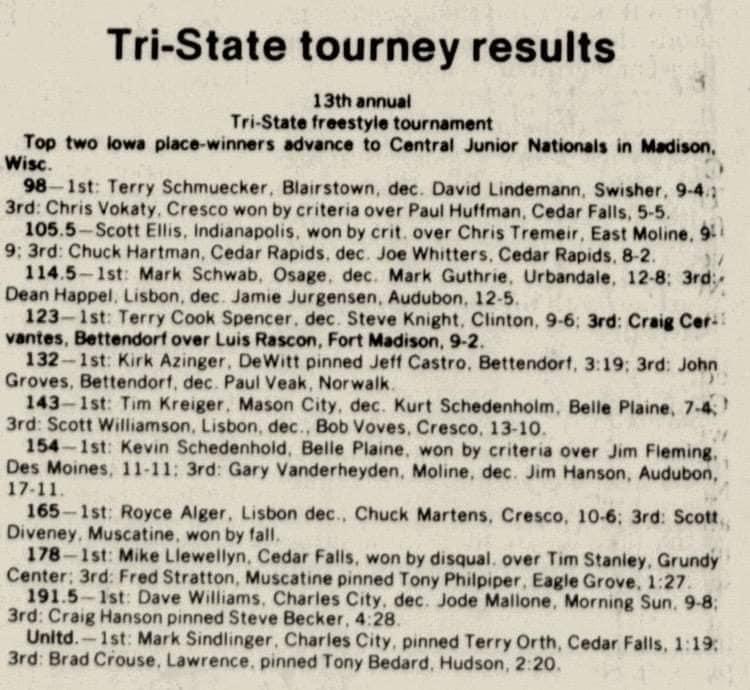 Terry Cook went on to wrestle for the University of Nebraska where he was a letter-winner and put together a very respectable collegiate career. While there, everything I come across seems to indicate that he continued to fight the injury bug. 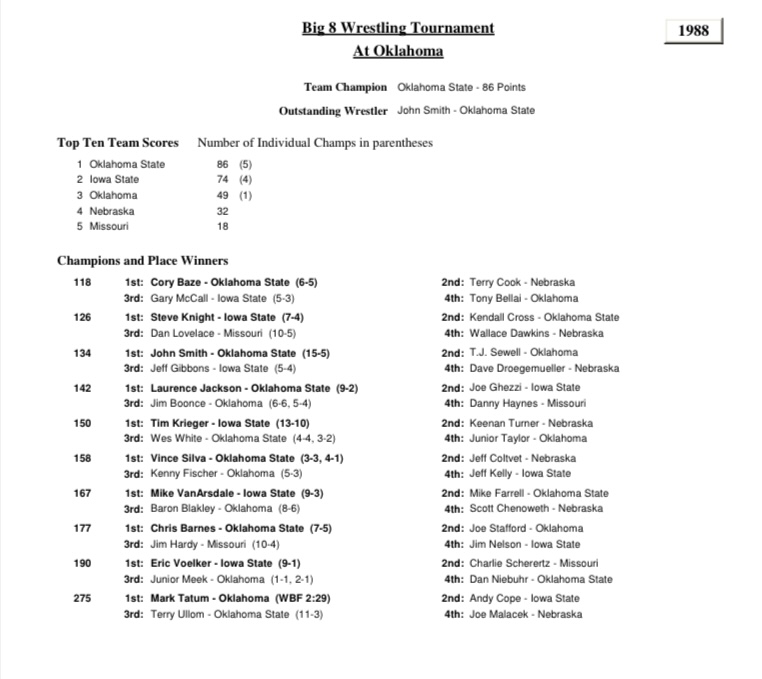 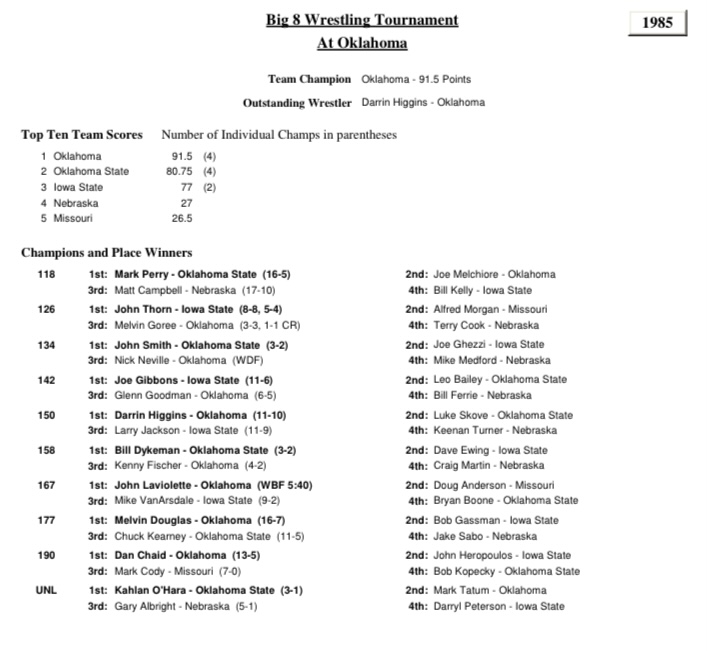 Terry Cook… he’s one of the all-time greats!

Next post: Remember The Wrestler: Manolis Galanakis, Nodaway Valley ‘00 (RIP)… Commentary Provided By His Brother, Mario and His Mother, Joni