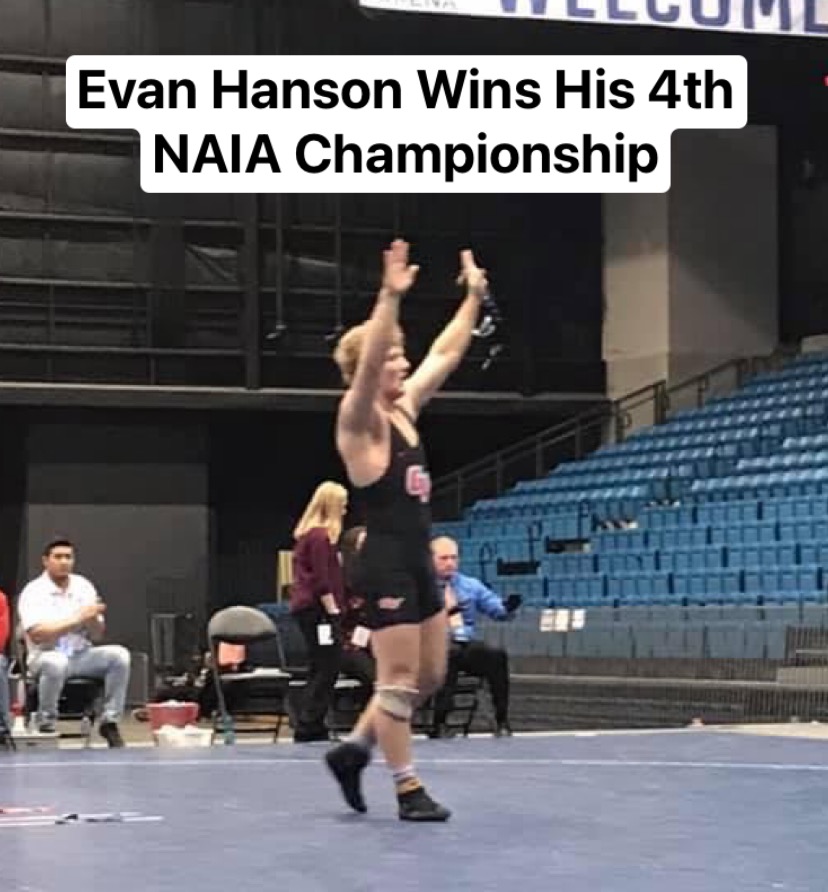 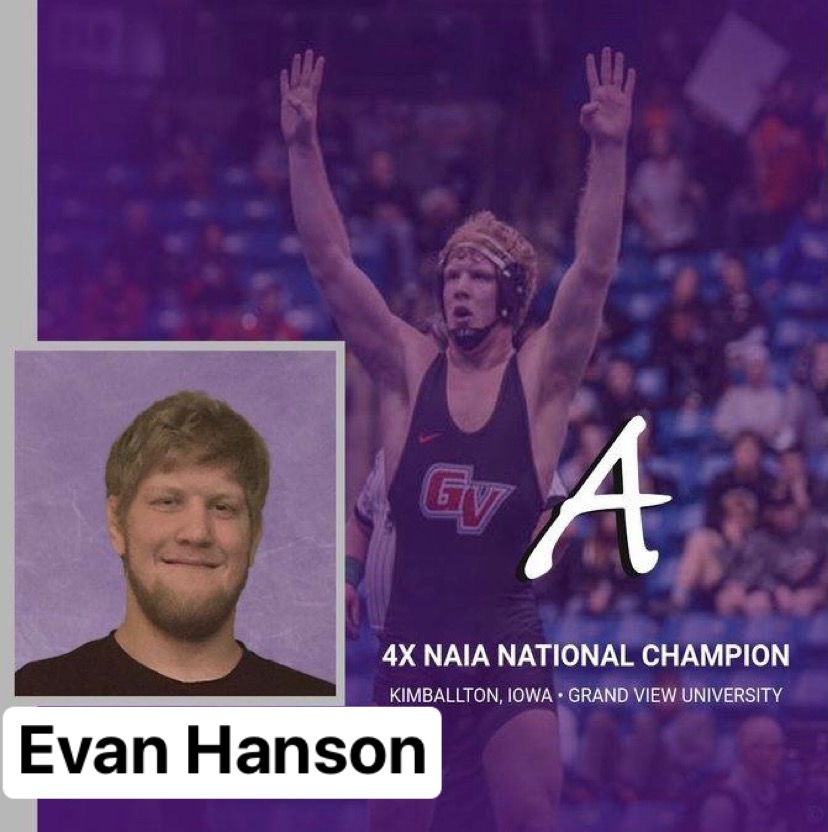 Evan Hansen is one of the best SW Iowa wrestlers ever as well as one of, if not THE best ever NAIA wrestler. And his career was fun to follow. His career in high school was pretty interesting, for he wrestled and performed well as both a lighter weight and an upper weight… this is similar to what guys like Willie Miklus, Drew Foster, Jay Borschel, etc. did.  I think it’s pretty impressive when you are so good that you can adapt your style to be successful at both weight ranges.  Hansen wrestled for Exira/Elk Horn-Kimballton in high school and didn’t place as a Freshman at 112 lbs, but won it the next year at 145, placed 3rd the year after that at 182 and concluded his HS career by winning another title at 182.

Hansen went on to wrestle at Grand View, where he became a 4X NAIA champion at 195 lbs., almost twice the weight he started out as when he was a Freshman.  Crazy to think about. He now helps coach at Avila University and was kind enough to fill us in on his wrestling journey. 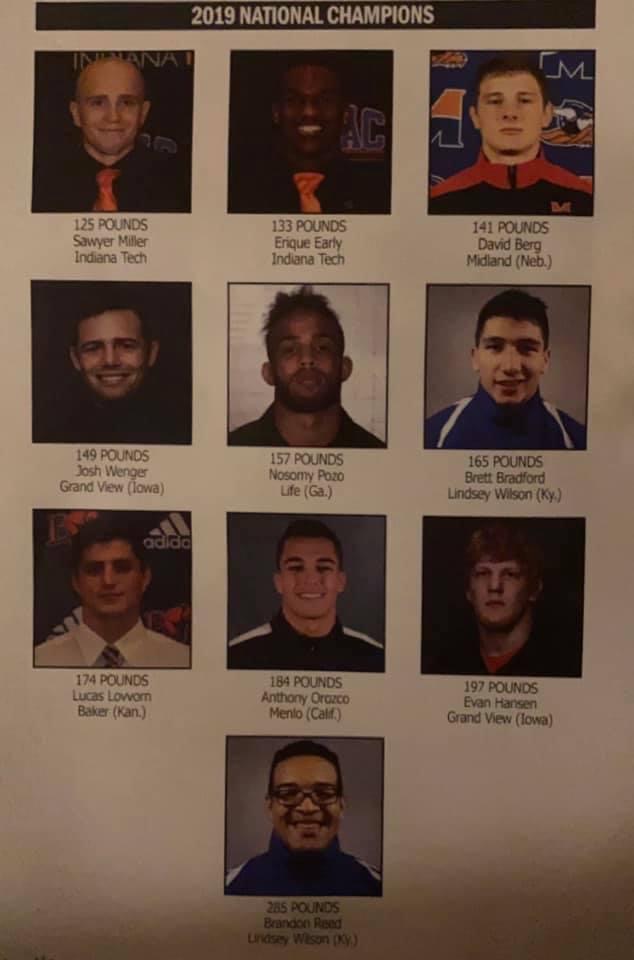 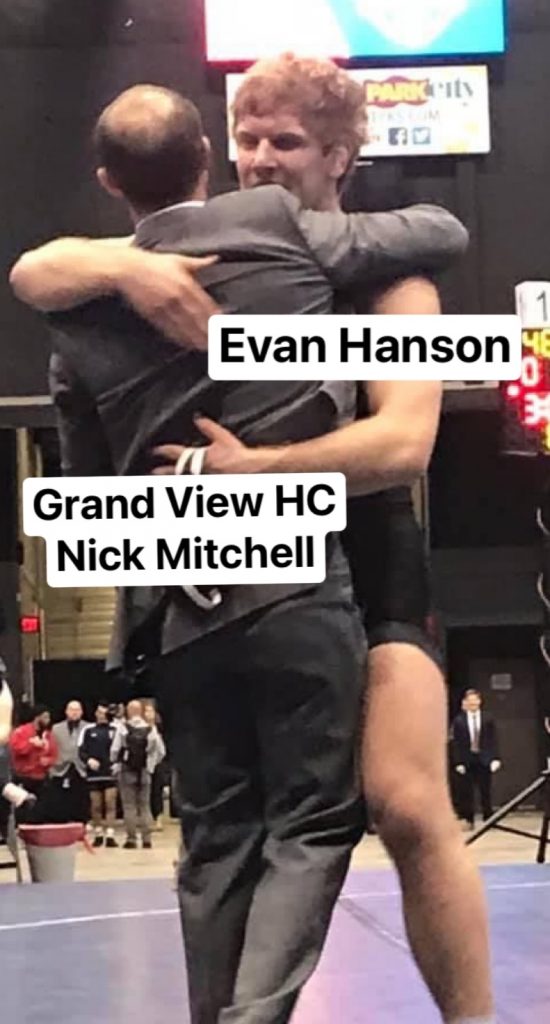 EVAN HANSEN: I had a babysitter who had a son wrestling in high school when I was young and I wanted to wrestle like him. Then I saw Cael Sanderson win his 4th title and that’s when I really fell in love with the sport and starting doing more.

EVAN HANSEN: The only person who has ever wrestled in my family is my uncle Neil Anderson. He was pretty good but never placed at state or went on to college to wrestle.

EVAN HANSEN: I’ve had a lot of challenges in my 20 year wrestling career but one of the biggest ones was going through my freshman year and throwing my state tournament matches then having to come back the next year at a higher weight and learn from that mistake. Although this is one of my biggest regrets I learned a lot from it and probably wouldn’t be where I’m at today without that experience.

EVAN HANSEN: Relaxed, composed and offensive. The more I have fun with it the better I wrestle. I just want to enjoy the opportunities and score points.

EVAN HANSEN: I don’t think I can say one coach was more influential than another. Every coach I’ve had throughout my career has helped me in some way become a better wrestler. Mentally or physically they all have had a big impact on my life.

EVAN HANSEN: I don’t remember where it was but I remember I was pretty young. I threw my headgear and went storming off and my parents just pulled me out of the tournament right there and said they wouldn’t put up with that attitude win or lose you’re respectful.

EVAN HANSEN: My high school team had 6 kids on it so we were never competitive in duals, but we did end up getting 10th at state my sophomore year when I won it and my teammate got 3rd. My college team has been very competitive winning 5 championships in my time at Grand View and winning 9 straight.

EVAN HANSEN: Cael Sanderson had a big impact on me as a wrestler because I saw what he did and I would study his matches and try to build my style to be similar to his. I took the things he did and made them my own. Then I saw guys like Ben Askren wrestling and added some things from him.

12. How do you feel your changed after going to Grand View?

EVAN HANSEN: I’m a lot better at setting things up and getting to my shots to finish quickly all while getting my opponent tired without getting myself tired. When I first came in I wouldn’t stop moving and although nobody could keep that pace I couldn’t either.

13. You wrestled at a high level as both a lighter weight and as a heavier weight. Did you have to adapt your style as you grew? Was your experience wrestling as a light guy helpful for you when you were an upperweight?

EVAN HANSEN: I honestly didn’t adapt my style too much. I just took what I did at lighter weights and got better at it and focused on technique to help me make up for strength.

EVAN HANSEN: I believe that no matter where you come from it’s possible to succeed in whatever you do as long as you’re willing to put in the work. You might have to work twice as hard as everyone else to get half the recognition but it’s possible to accomplish things regardless of what your circumstances are.

EVAN HANSEN: I don’t think there’s a way to change people’s mind about Grand View but it’s really just up to each individual to live their lives to the best of their abilities and be grateful for the opportunities given to them along with being humble in defeat and victory.

17. How do some of the D1 and NAIA guys compare to each other from your experience?

EVAN HANSEN: I think there’s a mutual respect between the two. Grand View goes and wrestles at D1 events all the time and does pretty well. It also depends on the athlete there’s people out there on a lot of teams that are there as a walk on and that’s okay but that doesn’t mean they can’t compete and the same goes for Grand View guys.

18. Do you feel some NAIA guys can compete at that level?

EVAN HANSEN: I think a lot of NAIA guys can compete at that level. The only difference between D1 and NAIA is the school size the rest is just people putting D1 on a pedestal and making it a bigger thing. That doesn’t mean that all D1 guys are better than the NAIA guys, that only means they get more recognition by the fans. It’s all wrestling and we’re trying to grow the sport.

19. Who are your favorite current HS and College wrestlers?

EVAN HANSEN: I rarely watch wrestling unless it’s for recruiting or helping my athletes.

20. If you could go back and change one thing about your wrestling career, what would it be?

EVAN HANSEN: I wouldn’t change anything because each one of those experiences are what allowed me to push myself in college and do the things I did. In college if I didn’t lose I may not have had the drive to keep coming back and getting better every day. You never know which experience it is that makes the difference for you in the future so instead of dwelling on it take them as blessings and learn from them.

21. Have you gotten into coaching yet? How have your wrestling coaches influenced the way you approach coaching if so?

EVAN HANSEN: Yes, I’m the Assistant for both men and women at Avila University. my coaches in my career have had an influence in my coaching all in very different ways between what I feel works and what doesn’t and when to go hard and when we should let off a little bit mostly how to help the young men and women become the best versions of themselves by teaching them to be the best they can be in every aspect of their lives

22. Did you wrestle all year or was it seasonal for you?

EVAN HANSEN: I wrestled seasonal in high school but never stopped going to camps and trying to learn and improve my skills. I never stopped working on my wrestling I just never went to practices. When I got to college I may have taken a couple months off but I never really stopped wrestling at any point.

23. What other sports did you play?

24. What are your favorite sports teams?

25 What are your hobbies?

EVAN HANSEN: I have a small youtube channel that I post on when I have free time, I spend time with my fiancé, I play video games, and I work out often.

26 How has wrestling shaped you as a person to this day?

EVAN HANSEN: Wrestling has helped me build character, discipline, and take responsibility for my actions. I learned that you can’t blame others because you aren’t where you want to be. You just put your head down and go to work, be the hardest working person there.

27. Any advice for upcoming wrestlers?

EVAN HANSEN: Give it everything you have. Even if you only plan to wrestle in junior high or high school. Time really fly’s and you’ll really regret it if you don’t give it everything you have and don’t accomplish the things you want to accomplish. Also have fun nobody starts wrestling because they hate it so always remember to have fun and enjoy the opportunities that God has given you.

28. Would you like to give a shout out to anyone you wrestled with, against, coached, etc.?

EVAN HANSEN: There’s a young kid named Alex Hansen who I’ve helped a little bit over the last few years, him, his parents and brother all came to watch me at nationals. He reminds me a lot of myself but he has a lot more work ethic than I had at that age. He’s got great things going for him in whatever he does.